Just like last year, the trip started off a little late, but for a different reason. Last year, a 4-hour sit at Denver turned into 8 hours when my flight got cancelled. This year, a 3-hour sit at Bush (Houston) turned into 6 after two ground stops were called in Houston because of thunderstorms over the airport. I am under the impression that one of them was called just as the plane to take me to Vegas left its gate in Austin, and was held on the tarmac there for over an hour. At least the Buca di Beppo at Bally's, where I was staying, was open this time - and touting a $13 all-you-can-eat pasta special, bringing out what would normally be about $30 worth of pasta to start.

Monday morning was another of my bus runs to look for dice that I don't have, as well as replace a few of my older players' club cards. I hit Cannery, Lucky Club (where I discover they no longer have a craps table - the only tables I saw were blackjack), Silver Nugget (where I had a $10 or so ribs / corn / BBQ beans special), Bighorn, and Gold Coast (the latter to see if they changed their chips to something with the casino name in the center - no, they haven't). Somewhere along the line, I dropped $20 into a VP machine. I got half of an 18" pepperoni pizza from Secret No Name Mystery Meat Pizza at the Cosmopolitan, but even with the standard pizza box, it got a little cold by the time I got back to the hotel room, and it lost some of its lustre.

Tuesday, not seeing anything worth playing at Bally's, I went across the street to play some 9/6 quarter Jacks or Better at the Cromwell (enter at the corner of Tropicana oops Flamingo & the Strip, and look for the bank of six on your right with the sign above touting something like a 99%+ return). I quickly burned through $20, but my next $20 turned into $40 and I decided to cut and run at the break even point. I then headed to Orleans and Hooters to see if either have "name" chips (rather than just a logo); Hooters "sort of" does, but the $5 chips all seemed to be "Rack Pack" chips that I already have. After lunch at some reasonably new pizza place (Magura's, on Tropicana & Spencer - a little too much ricotta and not enough mozzarella/provolone in the meat calzone, if you ask me, and they don't have fountain drinks) and a session at the Pinball Hall of Fame, I went back to the hotel and changed for dinner at the MGM Grand Buffet followed by the 7:00 showing of Cirque du Soleil's Ka. It's a good show, but had I known what the performance was like in advance, I probably would not have paid full price (actually, I got a ticket for free from MyVegas); there isn't nearly as much aerial acrobatics as I would expect from a Cirque show. Most of the production centers around a giant platform that can be lifted at one end and rotated, usually to give the audience an "aerial" view of whatever battles between good and evil are going on.

Another bus trip on Wednesday - this time, to Suncoast and Rampart, out near Summerlin. I did manage to get a pair of Suncoast dice for my collection. I then get off at Sahara and start looking for a deli I had written down as a lunch spot, but not finding it, I started walking east...about 1/2 mile, as it turns out, before deciding to bail on the deli and head back to the Strip on the bus. It turned out that the deli wasn't on Sahara, but on Charleston. Still, it wasn't a total loss; it gave me a chance to check out a place that a lot of people rave about - Tacos El Gordo, just north of the Encore. I then check out the dice selection at Bonanza Gift Shop, and am quite surprised to see (a) a number of sets of dice colored in amber, (b) a pair of Rampart dice, which I have been looking for for years, and (c) a pair of Lucky Club dice, considering that I had just been there and it didn't have any craps tables. After stops at SLS and Stratosphere to get new players cards, I ended up having dinner at the Paris buffet, paid for with Caesar's Rewards points; it's amazing how many you can rack up after years of putting your cable bill payments on the Caesar's credit card.
Wednesday night, I get a knock at the door; it's a maintenance man who says that one of the maids claimed that there was water all over my bathroom floor when she made up my room.

Thursday, my 3-day bus pass had expired, so, rather than shell out another $8, and also wanting to burn off some of the carbs I have been pretty much inhaling over the past few days, I pounded the Strip. Another $20 into the VP at Cromwell lasted an hour, followed by another $20 that I nearly turned into $60, which would be a break-even point for the entire trip, before I bailed at $40. Lunch at Shake Shack, and grabbed a few futures sheets from the sports books - I know somebody here is interested in NFL regular season wins numbers; I'll see if I can combine the numbers and post them here, probably as a follow-up to this thread. Finished up with dinner at the Creperie at Paris; went with ham & cheese, Monte Cristo, and lemon with blueberries for dessert. $11 each, but paid for with rewards points.

Friday, I head back - after being informed that my flight had been canceled. Fortunately, I was up early enough that I could change to a flight leaving two hours earlier for free. Ended up losing $20 in gambling, and dropping about that much into pinball. 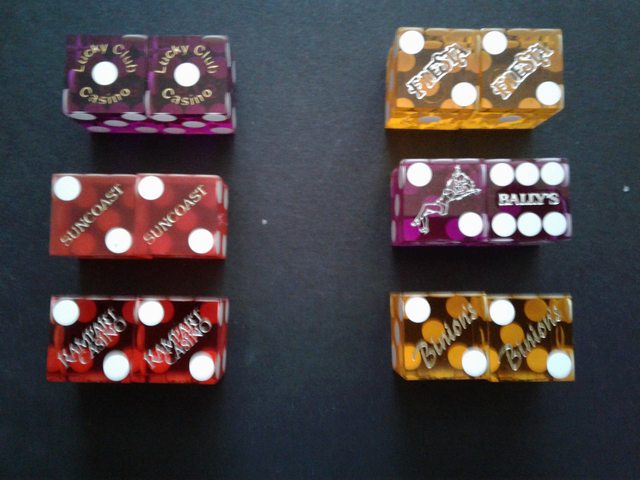 Tuesday, not seeing anything worth playing at Bally's, I went across the street to play some 9/6 quarter Jacks or Better at the Cromwell (enter at the corner of Tropicana & the Strip, and look for the bank of six on your right with the sign above touting something like a 99%+ return).

I think you mean Flamingo, not Trop.
ams288

What airline are you flying that is having all these issues?
Ding Dong the Witch is Dead
ThatDonGuy

What airline are you flying that is having all these issues?

United coming in (and the issues were airport related, not airline related - the entire airport at Houston was shut down briefly, twice), and Southwest headed out (note sure why the original flight was cancelled).

GWAE
Joined: Sep 20, 2013
I have had more delays and cancels with delta and United than anyone. I have about 30 flights with spirit without a single delay or cancel.
Expect the worst and you will never be disappointed. I AM NOT PART OF GWAE RADIO SHOW
MaxPen

MaxPen
Joined: Feb 4, 2015
You might want to get some probiotics after eating at the Silver Nugget. I've met very few people brave enough to eat there.
FleaStiff

FleaStiff
Joined: Oct 19, 2009
It is okay to be a low roller and I guess its okay to want trinkets and momentos but buses??

I would probably refuse a free trip to Vegas if it involved even one bus ride to Summerlin.
bobbartop

It is okay to be a low roller and I guess its okay to want trinkets and momentos but buses??

I would probably refuse a free trip to Vegas if it involved even one bus ride to Summerlin.

It's none of my business and I don't know the OP, but I just can't imagine going to Vegas and not renting a car. It makes things so easy.
'Emergencies' have always been the pretext on which the safeguards of individual liberty have been eroded.
FCBLComish

It's none of my business and I don't know the OP, but I just can't imagine going to Vegas and not renting a car. It makes things so easy.

Actually in these days where over half the strip and all of downtown are charging for parking it is not as good an idea as it used to be.
Beware, I work for the dark side.... We have cookies
ThatDonGuy

It is okay to be a low roller and I guess its okay to want trinkets and momentos but buses??

I would probably refuse a free trip to Vegas if it involved even one bus ride to Summerlin.

I rented a car once - it was the only way to get to Them - er, The M - and pretty much the only way to get to Railroad Pass (the only buses there run hourly) - but it just doesn't seem cost effective for one person. A three-day bus pass is $20. Okay, there's some walking involved, but I for one can use the exercise.
RSS Feed