That's the problem - I don't think anybody here knows exactly how it works.
Here's how I think it works - but instead of player and banker in baccarat, I am going to use red and black in roulette, since it should work the same way.

That is very dangerous to use Roulette instead of Baccarat. Baccarat experts would never attempt that and Roulette experts scoff at the idea of playing Baccarat. (I do get what you are after)

there are so many to choose from...

"WIN AT ROULETTE"
IT CAN BE DONE !
DISCOVER THE SECRET OF
WINNING AT ROULETTE,
WITH SUPERIOR KNOWLEDGE
AND A SUPERIOR SYSTEM.
WE HAVE ALL THE NECESSARY TOOLS FOR YOU,
HERE AT WIN-MAXX.COM.
THE NO.1 ROULETTE SITE !

IF YOU ARE REALLY INTERESTED IN THE GAME OF ROULETTE,
READ THE INTRO PAGE VERY CAREFULLY !!!

That's the problem - I don't think anybody here knows exactly how it works.

I don't believe his system works. But it doesn't bother me that he is posting it, after all this is a gambling forum and as well even though most everyone put him down he remained relatively calm, collected and polite.

What does bother me is when a Mod uses profanity, harsh or dismissive words to put down a poster.

OnceDear is British, no? He's probably familiar then with Upstairs, Downstairs either the original 1971 or 2010, remake. How does Mr. Hudson deal with guests he doesn't like? Does he start swearing at them or insulting them?

The Mr. Hudson analogy is very apposite. Hudson always cared the utmost about how his and the other servants' actions reflected on the master. 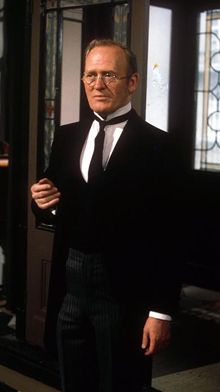 Mods', such as OnceDear's, actions reflect on their masters, in this case the Wizard. And when they use profanity or are in any way less than polite or gracious towards guests it just tarnishes the image of the forum. And it reflects badly on the master, the Wizard, that he would allow such repeated impolite actions from a Mod.

I realize this isn't a typical forum in that the Mods are also posters creating content, but I think Mods should never forget that they are always wearing that Moderator hat, even if they don other hats too.
I tell you it’s wonderful to be here, man. I don’t give a damn who wins or loses. It’s just wonderful to be here with you people.
Anunnaki1202

Anunnaki1202
Joined: Jun 29, 2016
If you choose to use martingale is your choice but be aware martingale can lose very quickly or whatever progression you want you need to get out to bankroll to be on +.
Then reset all bet to flat bet again.
Flat bet on the leading color.

Antimartingale is lift up bet when win not lose. Is exactly the other way around of the martingale
Where there's a will, there is a way
Anunnaki1202

Anunnaki1202
Joined: Jun 29, 2016
I'll try to make a video of the same system but only flat bet.
Will not use nothing on the perfect balance.
As always the losing will happening when switching sides will somehow difficult to stay un on + but is staying.
I am a user from mmm money making machine and a friend from there set up this system for me on a RSS Pro software.
Am not at my computer now but when I will get home I'll screen record the system. JUST FLAT BET ON THE + BALANCE nothing will happen when switching the colour.
That's why I asked for help here.
By tomorrow all can see the flat bet on the + balance.
I will let it run 1 million of combinations
Will be black and red and will show roulette numbers .. is same thing as banker and player.
Where there's a will, there is a way
ThatDonGuy

Also remember that, in a casino, there is no such thing as a "50/50" game; even if you do get back to balance, you will have lost money on all of the times 0 (and 00, if your wheel has that) came up. That's why those numbers are there. They don't exist in baccarat, but that's why you only get 19 back for every 20 you bet on the banker.

Like most systems like yours, you will have lots of small wins, but the total of your wins will be less than the total of the few losses you have.
sabre

Time and time again on this form a troll comes along making some wild claims just to get a rise out of the smart and psuedo-smart audience. Invariably someone comes along and calls the person a troll ... because that's what he/she is. Then the troll caller gets suspended.
beachbumbabs
Administrator

So that's a little better comprehension.
If the House lost every hand, they wouldn't deal the game.
CyrusV

There is no per se "system" that works at Baccarat, but I have won at this game consistently. I've posted before about why, and few here seem to buy it, but then - I'm not selling anything anyway.

Do you mind linking me to your thread.

MDawg
Joined: Sep 27, 2018
Sorry I've posted it in different posts all over the place, not in any one thread. The rudimentary search capability of this forum makes the content a little hard to find.
I tell you it’s wonderful to be here, man. I don’t give a damn who wins or loses. It’s just wonderful to be here with you people.
RSS Feed