ChumpChange
Joined: Jun 15, 2018
I've been playing Spanish 21 on the demo version of Casino Verite where all 5's turn into 6's, so I can't hit a 16 expecting a 5 for a 21. I was playing with a $500 buy-in and my minimum bet would be $30 so if a suited triple 7's against a dealer 7 shows up, I don't know if I'll win $5,000 on this game, but at a real table I would. I'm racking up huge amounts of player error totals for playing Spanish 21 strategy on a BJ game. I really like that I win with a 5 card hand that doesn't bust, or I win on a 21 even when the dealer has a BJ but checks the card after I have played my hand already.
I started this session at around $14,500 and won to over $18K in 103 hands. I just invented this betting strategy I'm using just before I started playing today, and I won't share it. But I will show the results from the screenshots below. I finally had a lucky break, and this is what it looks like when that happens. 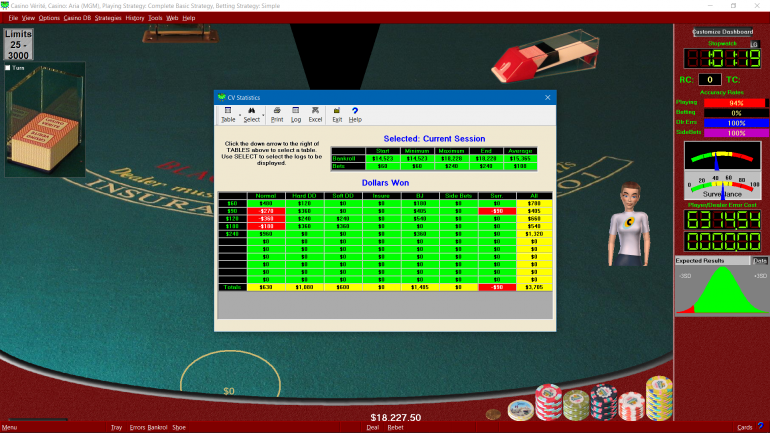 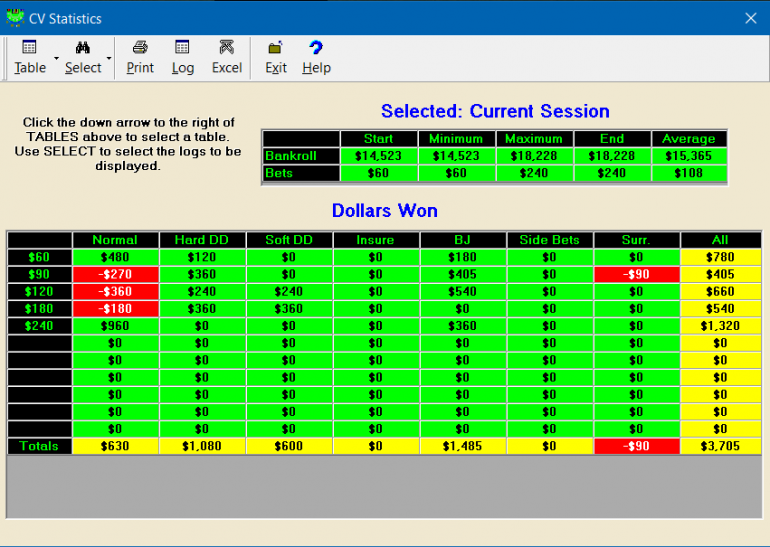 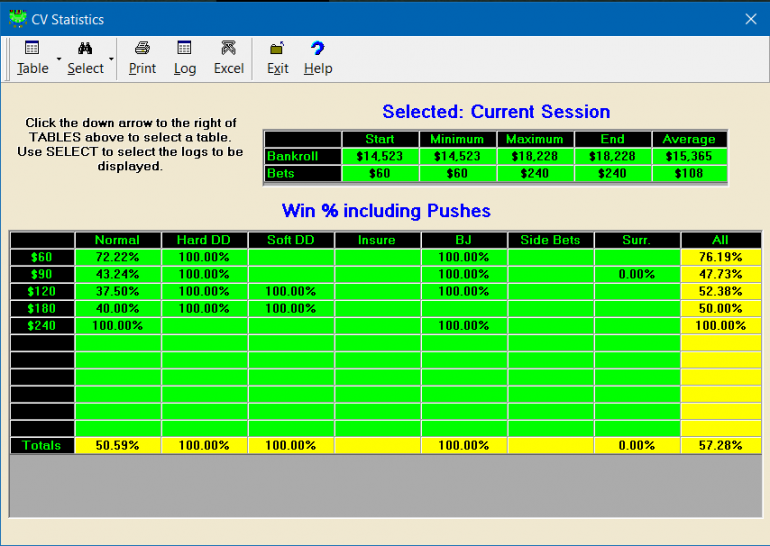 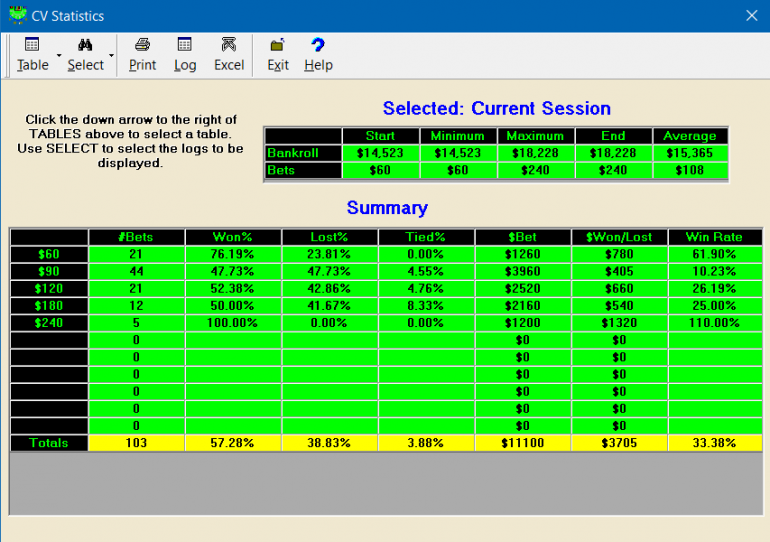 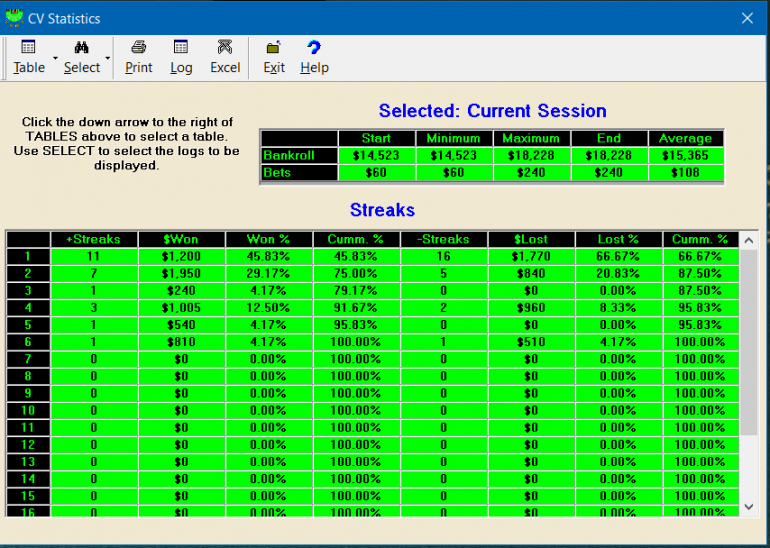 Resampling from HD to 800 x 450 on my PC just made it blurrier, so I'll upload the original HD 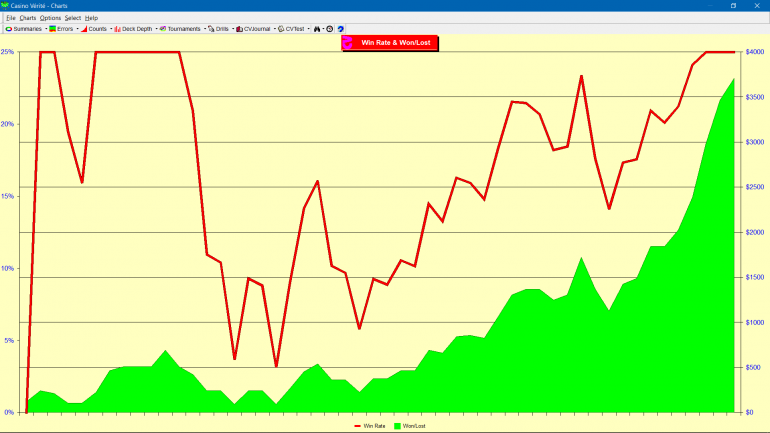 Is this just a way to make the demo version un-usable?

LOL, it might be an interesting game variant, particularly for SP21.
Last edited by: gordonm888 on Aug 31, 2021
So many better men, a few of them friends, are dead. And a thousand thousand slimy things live on, and so do I.
ChumpChange

ChumpChange
Joined: Jun 15, 2018
I think the real help would be springing $100 or whatever to pay for the software, but if I can win the game without that problem, I'm making progress. I started off with a $1,000 bankroll and I haven't looked back after 13K+ hands. I didn't know that Basic Strategy for the (5->6) even existed. What would the charts look like?
gordonm888
Administrator

My post above originally asked if you wanted Sp21 (5->6) basic strategy but I amended it after I realized that the game you are playing may just be an artifact of your use of a demo copy of commercial software.

I can help you if you want help with strategy, but I'm assuming that 5->6 is just a designer artifact of the demo software to allow you to familiarize yourself with the CSV package without making it useful for analyzing BJ.

As I said above, removing all 5s from the shoe and replacing them with 6s would be an interesting variant of Sp21 (and perhaps BJ.) It may even be a game that hasn't already been invented by MrCasinoGames
Last edited by: gordonm888 on Dec 28, 2021
So many better men, a few of them friends, are dead. And a thousand thousand slimy things live on, and so do I.
ChumpChange

ChumpChange
Joined: Jun 15, 2018
The software company wants their money, and kewlJ recommended the software to me. Since I don't take card counting seriously enough to warrant a backoff, I don't play the game like a card counter would. If I paid for the software, that 5's to 6's glitch would disappear.
Last edited by: ChumpChange on Aug 31, 2021
ChumpChange

ChumpChange
Joined: Jun 15, 2018
So I played some Video Poker on the Wiz's Site. I haven't played VP in so long, I really don't know best strategy anymore, but I'd keep a low pair and a high card and many times get 2 pair out of it. In the link below is some screenshots I posted in a thread because I just randomly decided to play.
https://wizardofvegas.com/forum/questions-and-answers/advice/36441-video-poker-1-coin-or-5-coin-bets/3/#post823812
ChumpChange

ChumpChange
Joined: Jun 15, 2018
I spent a couple hours playing Double Double Bonus VP on the Wiz's site. I got one 4 of a kind. Then the machine went cold and I quit with a loss of 500 credits. 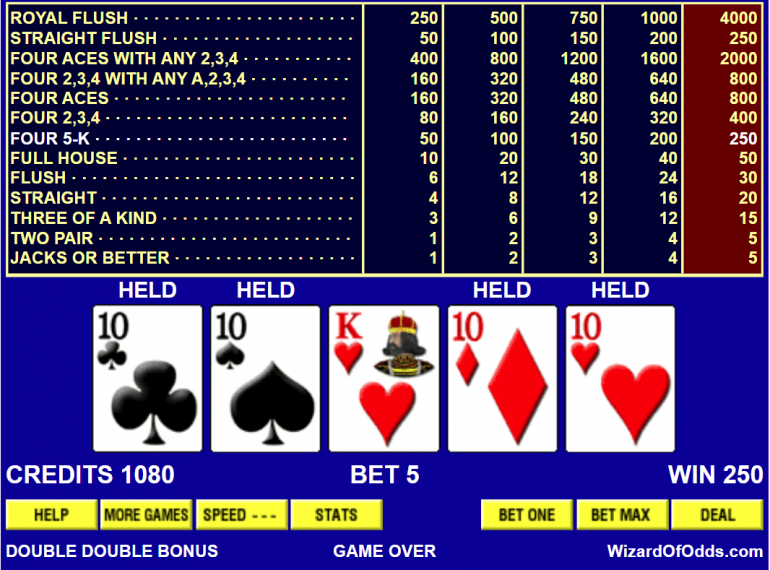 ChumpChange
Joined: Jun 15, 2018
I got to about 35 minutes into watching this UTH player buy-in for $2K and win it up to near $10K and I thought to myself, I don't really like this game, how is he getting lucky? MS Stud is my game. Well here's the video to watch his good luck.
BIGGEST ULTIMATE TEXAS HOLDEM WIN EVER! CASHING OUT $14000!! - YouTube
https://www.youtube.com/watch?v=Gkys7lOMQho
All Casino Action
186K subscribers

I went to the Wizard's site and played for a couple hours of MS Stud at breakneck speed with the Wiz's error correction on so I don't get rowdy breaking the strategy.
I started with $50K, as that machine does, I can't set it. I played $100 ante the whole time. I had one big win when I was already down $15K. 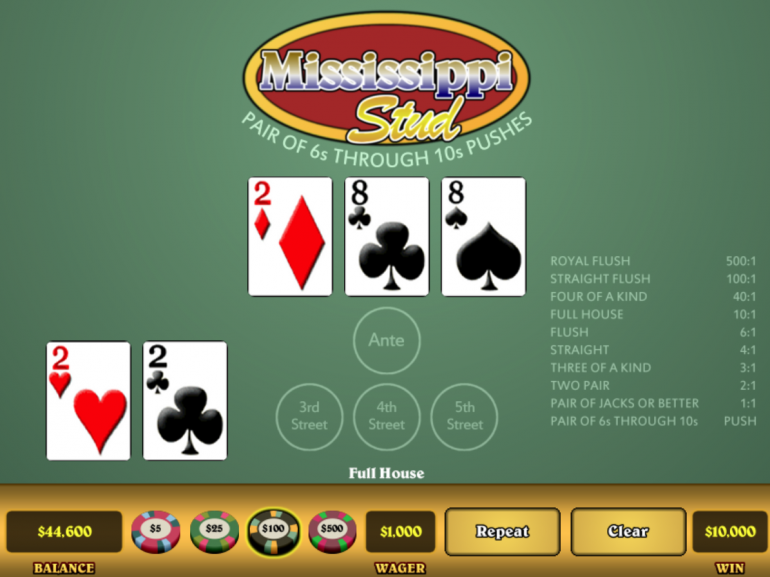 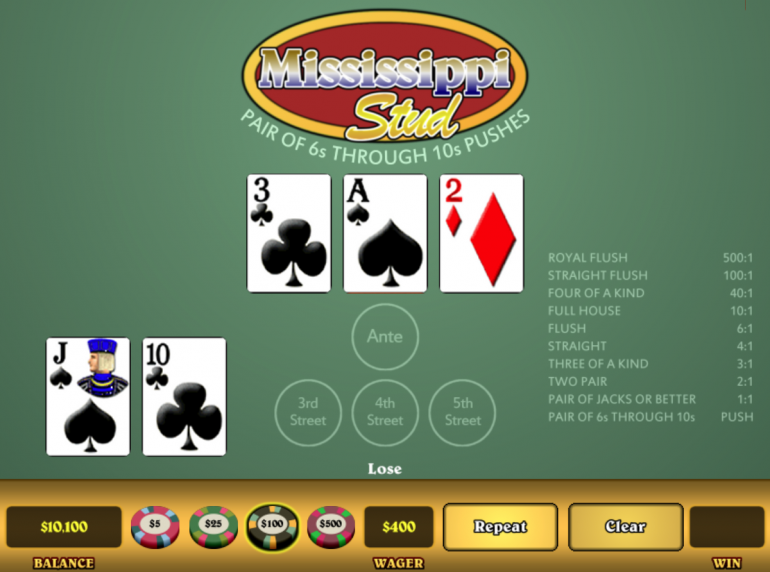 The bad luck on my next session courtesy of WinCraps's "screw me at all costs" algorithm has me wondering what a buy-in should be or if I should just bet Don't Pass all the time. I tried the same strategy as above and lost over $20K in 524 rolls.

I got an update on my comps, which would be grossly affected by today's play.