On March 16, 2020, Las Vegas and the entire country was getting ready to hunker down. Many already had hunkered, some had little to no fear, but most people seemed to be somewhere in the middle. The Wynn and all MGM properties were scheduled the shut down the next day. In the news that day, the stock market set a new record for the largest point drop (DOW dropping almost 2,997 points or 12.93%) and the White House discouraged gatherings of more than ten people.

Perhaps it wasn't the smartest decision I ever made, but on that day I decided to see what a Las Vegas casino looked like, in particular the Suncoast, a mainly locals casino near where I live. In particular, I thought there would be little competition in the bingo room. In Las Vegas, the prize pool in bingo is fixed. Thus, the fewer cards you're competing against, the better your odds. In bingo, the value is proportional to the ratio of the prize pool to the number of cards in play.

When I arrived at about 2:30 PM, the parking lot was about half as full as it normally would be on a Monday afternoon. Once inside, I noticed every other slot machine was turned off. The table games had strictly three chairs per table. In a casino with about 50 table games, only about 10 were open, with about half standing dead. The 64-lane bowling alley had only four games going. I was hoping this pattern would continue to the bingo room, but, alas, it seemed to have about 75% of its usual number of players for the 3:00 session. This is a rough estimate, as I hadn't played bingo in several years and even then I preferred the 9:00 PM session.

I came with plenty of money, hoping to find a nearly deserted room in which case I would be a card hog and monopolize the game. However, based on about 60 players in the room, I figured wasn't going to be an outstanding value. Perhaps not even any value at all. It would depend on how many cards my competing players were buying. My view was to spend a little money for research purposes to estimate the number of players and maybe play more sessions if I detected a good value.

I thought my initial selection was cards would come to $54, enough to get a free Large Rainbow pack. However, there was some kind of other promotion running and my total came to $44 only. So I purchased three $2 Double Daub cards, a special progressive game for game 8, that I previously considered a bad value. My other $44 purchased 120 regular cards of varying colors. Let me add that, no, I did not validate. I never do. If the Cash Ball jackpot were high enough for validating to be a good deal, I wouldn't play at all, as it would induce too much competition.

In games 1 to 7 I was "cased" many times, meaning one number away from a winning. However, alas, the numbers I needed were never called. When game 8 came around I took a break from taking notes and drew out a map of the 50 states in my notebook (something I have a good skill for). Half way through, I was surprised when my device to play electronically beeped, which means I was one number away from winning. One or two more balls were called and I nobody had won yet. Then whatever number I needed, I think something in the 20's, was called! I shouted out "bingo!" enthusiastically. However, the caller didn't seem to acknowledge me. Another player, an elderly woman, said in a somewhat annoyed voice, "You have to raise your hand." Boy, was I rusty at bingo. So I waved both hands frantically. If another number had been called, it would have voided my win. An attendant did get to me, went through the long verification process, including calling out every number that contributed to the win. It verified, of course, and I won a progressive jackpot of $1,135! This was truly dumb luck. It would be like me making a side bet in a table game (something I highly advise against doing), once, and hitting a 200 to 1 shot. The rest of the game I continued to be cased often but never won. 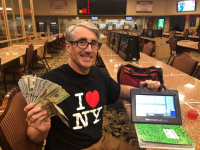 When I got home I used my bingo calculator to estimate the number of cards in play. I won't bore you with all the details, except to say the bottom line was there were about 5,000 regular cards in play. This would suggest the average player had about 85. Assuming the player purchased unvalidated B Electronic Specials, the best value, he would have had about a 93% expected return, or a 7% house edge. Please take this estimate with a grain of salt, as that 5,000 figure is just an estimate. I would say the margin of error is about 1,500 cards. One session is also a bad estimator of bingo value in general.

After leaving bingo victorious, I went to the sports book to see if there was anything to bet on. The room was empty except for one bored writer sitting at an empty window. The entire board of bets was filled with futures. No specific games to bet on, except one. It was a bet on a Turkish league soccer game. In a very un-Wizard like move, I threw $20 down on the underdog, Caykur Rizespor to win at +330 odds, to be played on Saint Patrick's Day. The luck* of the Irish was not with me during the game, as my team lost 0-2.

Suffice it to say I probably won't be back for bingo, at least for Coronavirus reasons. For one reason, there are still too many elderly people risking death to play. Remember, in bingo the enemy isn't the casino, it's the other players. For another, I don't want to die either.

* Let the record show, I was just joking. I don't believe in luck, as defined as a force, other than in a pure mathematical sense, that causes good or bad things to happen.

I have always thought that Bingo players were usually bused in from area retirement homes and would not have anticipated diminished crowds. I do recall some people heading to a Bingo room upon encountering winds and rain that they thought might affect first-game-of-the-day attendance.

Great win! You are the Obi-Wan Kenobi of gamblers. In terms of forces that influence destiny, he didn’t believe in luck either.

I won't go into details, but played charity bingo some lately at 50% HE yikes. My first go at it I embarrassed myself by not knowing how to play. I think I knew at some point in my younger days but I had forgotten what the letter meant, in other words B15 say meant under the row B and the other rows are I,N,G,O .

Charity bingo is high house edge and fraught with fraud often involving prize-wining shills who in reality only get a pittance.
Vegas bingo is plus or minus one-percent with most Bingo rooms making money the hours that games are NOT being called.
Online bingo is unknown to me.
Years go there was ultra fast bingo in Hawaiian Gardens a micro-city surrounded by Los Angeles, but I don't know the current situation there.