The Psychology of Slot Machines (Part 2)

In our previous article dealing with the Psychology of Slot Machines, we discussed the concept of, "Near-Misses," and in this article, we're going to be talking about actual hits...for Free Games!!!

Let's start with that term, "Free Games," which is another Psychological ploy meant to get the player involved in the game.  The idea is that the player is getting something for, "Free," or a, "Bonus," which are both highly positive words to use.  It's almost like saying, "For no additional cost, you get to play twenty more games!"

It is true, of course, that the player need make no additional bet in order to play the Free Games, at least, not in most cases.  On a game such as, "Bonus Super Keno," the game is called, "Bonus Games," and all wins are automatically doubled, but the player must still make the base bet.

However, Free Games are anything but free.  Free Games make up a significant contribution of the overall return to any given game, and of course, the amount that the player is betting, the probability of hitting Free Games, and the average value of Free Games are all factored into that. 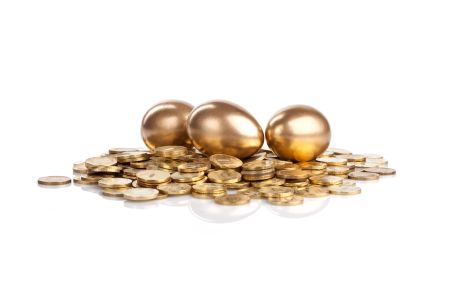 Let's take a look at my Golden Goose game from the previous article, except, we're going to have it that Three Golden Geese or Golden Geese in Reels 1 & 2 plus a Golden Egg on Reel 3 can result in Free Games.  The player will win $5 and be awarded 15 Free Games with one possible re-trigger:

The Probabilities, Pays and Returns are as follows:

The expected value of Free Games, in Percentage, if Free Games do not Retrigger is:

If the Free Games do Retrigger:

Now, this game has an illegally low payout in some states, but such is life!!!

In other words, about 1 in 11.613 times there will be a Near-Miss where the necessary symbol to trigger Free Games could have landed on any given Reel and did land on two of them.  Further, about 1 in 46.96 times the Golden Goose will land on Reels 1 & 2 with a miss on Reel 3, so I could have some sort of slow-spin and music type thing going on while the player waits.

Interestingly enough, despite the lower return...absurdly low, in fact...I bet a player would play this longer than the Golden Goose flat-top in the first Psychology of Slot Machines article.  After all, the Games are free, aren't they?

Actually, on second thought, we could have Free Games pay 2x on wins and then you have a return of a little north of 88%, just throwing that out there.

The point is that, as the game is sitting there essentially playing itself, the player feels rewarded...at least when the player doesn't completely whiff on the Free Games.  Of course, some machines have solved even that problem by having some minimum Free Games Guarantee amount that, while still unsatisfying compared to a big win, is at least more palatable than whiffing on x amount of spins.

...And Losing is Winning

Another thing that feeds into player Psychology is the desire to win frequently with the bells, whistles, music, paylines lighting up.  The best way to accomplish this, while still having the player lose, is by having a machine with 1,243,587 Lines (Number Intentionally Ridiculous) and having, "Wins," that can actually pay less than the amount bet.

The way slot machines work is that all Pays are on a For-One basis, and what that means is that any monies bet at a slot machine are presumed lost as soon as a player presses the, "Spin," button.  This is also true for Video Poker and Video Keno, which is why you see credits deducted before a result is known, not after.

Fortunately, for the manufacturers and casinos, the ability to say the player, "Won," something, and therefore, the ability to offer machines with hit rates occasionally as high as 70%, they are able to play into the players Psychology.  It would be far less sexy if the machine said, "Lose $1.20," or, "$1.50 returns $0.30," or anything along those lines.

The idea is that any kind of a return is going to seem more palatable to a player than losing the entire bet.  In terms of coming out of a playing session with a profit, a player is often more likely to do so if the lowest pay on a machine is some form of break-even pay on the bet (or higher!) rather than some fraction of the bet.  Obviously, these fractions of bets that get returned here and there still comprise part of the machine's overall return, which means that, all other things being equal, less of the return is going towards results that are actually profitable...or at least neutral!

Everyone wants to win, so whether it is working the probabilities so that a player looks like he/she is, "Close," to winning or telling a player that he/she is winning when he/she is actually losing, slot machines are and shall forever remain as much about Psychology as Math.

In any case, as with anything else, both of these items are about appealing to the Psychology of some players, because certainly, there are still a few die-hards that would rather play a straight up Single-Line or Triple-Line game, or such games would no longer be present on casino floors.  Of course these dynamics will also make the games more fun for players, which is necessary for manufacturers and casinos, because duration translates directly into cash when a game has a House Edge, and the House Edge doesn't matter if the player isn't playing the machine.