The Psychology of Slot Machines (Part 1)

This week we are mainly going to discuss slot machines throughout three articles and then have a fourth article highlighting another WoO promotion.

As with anything else involving gambling, slot machines are all about Math, but, they are also about Psychology.  One of the most important components of slot machine design is not just making sure the Math yields a House Advantage within a certain range, (that part is easy) but also about making sure that the player is having fun playing the machine while bucking the House Advantage.

In so doing, the slot machine designer must tap into the Psychology of the players, and one of the most important ways to do this is to design a machine with, "Near-Misses," which make it appear as if the player almost hit a jackpot.  These near-misses accomplish two things: First of all, they make it appear, Psychologically, as though the player is close to getting a jackpot, secondly, they must happen frequently enough to make hitting the jackpot SEEM much more likely than it actually is. 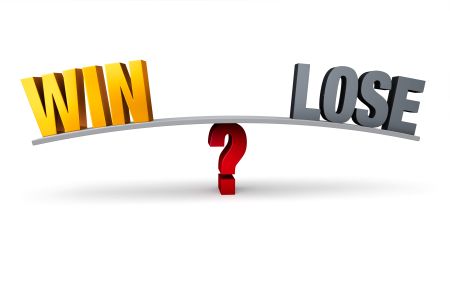 The probabilities, pays, and contributions to the return are as follows:

The overall return on a bet is going to be 0.87870370247, thus the House Edge is about 12.12963%.  The House Edge is probably actually a little high for such a simple game, especially given the low hit rate which is just north of 5%, but this works just as an example.

If a player is going to get, "Hooked," to playing this machine, so to speak, it is going to be because of the seemingly frequent appearance of the Three Golden Goose Eggs which would yield a $200 Jackpot per dollar bet.  It is important to remember that, every time a player sees Two Golden Goose Eggs on the Payline, there is a reasonably good chance the player will see a Third Goose Egg on one of the other reels either above or below the Payline.

For our next trick, we're going to design the First and Second Reels the same way with respect to our two Golden Goose Eggs.  We're going to wedge them below two of the One Bar symbols and above two of the Cherry symbols.  However, this Reels are going to have a more accurate visual representation.

The new combined probability of at least Two Golden Goose symbols appearing on the Payline without hitting is:  0.00399999999

Thus, there is a total probability of about 1 in 86.5384617298 that Three Golden Goose Eggs will be somehow visible without that 1 in 1350 result hitting, and that's if I didn't miss anything.

The point of this little thought experiment is that we go our entire lives watching objects in motion and our brains are trained, by our surroundings, to believe that the closer an object comes to hitting a desired target, the more likely it is to actually do it.

Imagine learning how to shoot free throws in basketball.  For all but the naturally gifted who intuitively project an object in an accurate parabola with the desired amount of force, it is going to be a process.  With modicum physical ability, you're going to get closer and closer to accurately making free throws until your percentage is significantly better than it was.

The most important thing for a slot player to understand is that the slot machine is specifically designed to take advantage of the player's Psychology and get into the player's head.  It is also important to recognize that slot machines do not do this in spite of being fun, it is the fact that they do this that makes them fun.