Double Up to Catch Up

(A Corollary to Bob Dancer's Article)

Bob Dancer had an article posted on Tuesday, 6/9/2015, on the Las Vegas Advisor website addressing the Double-Up feature on some Video Poker games:

First of all, I highly recommend that everyone read this article, and, quite frankly, I would suggest that anyone who cares AT ALL about gambling follow Mr. Dancer's weekly articles on the LVA site.  While his articles (not surprisingly) typically deal with Video Poker, there's still a good bit of information in them that could prove useful to all gamblers.

With that said, I agree with the above-referenced article 100%, but I wanted to expand upon it mathematically because I think it is a mathematical concept that should be readily understood by anyone who takes gambling even remotely seriously.

For those of you who don't know, the, "Double-Up," feature is a feature that is available on some Video Poker machines in which, after a winning hand, the player may choose to risk the amount returned to him in an effort to double it or lose everything.  The Double-Up feature is not necessarily a hugely popular feature, however, and many casinos will have it disabled on their machines.

Generally, the Double-Up feature consists of a Dealer's Card, which is shown after the player decides that, yes, he will double-up.  The player will then choose one of four cards and will either beat the dealer, lose to the dealer, or tie.  In games involving Wild Cards, the Wild Card is presumed to have the highest value, other cards go according to standard Ranks with Aces being high. 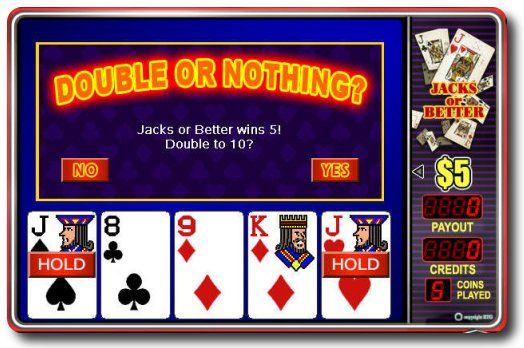 The math behind this first style of double up is very simple, especially if we base it upon a standard 52-Card game, which we are going to do.  The dealer takes a card, thus, the probability of the dealer taking a card is 1.  The player then selects a card that will either match the dealer's, beat the dealer's, or lose to the dealers:

Someone might ask, "Well, what if the dealer draws a deuce on a standard game, then the player can only tie or win, so how can you say those are the probabilities?"

To answer the question, consider the dealer drawing an Ace, the player can only lose or tie, and so on down the line.  Over the extreme long run, the stated probabilities will come into play because the dealer is expected to draw the same initial card the same number of times.

The one thing that we notice is that the probability of a player either winning or losing is .9411764, which means that the player is expected to play 1/.9411764 or, 1.0625 times per decision.  However, it would seem unusual for as player to decide he no longer wants to double-up after a tie, so we're just going to call it 50/50.

The second double-up method is one that I have noticed on Spielo GTECH machines offering Video Poker.  This method could not be more straight-forward, when the player decides to double-up, the dealer will show a card.  The card shown will NEVER be the highest or lowest possible card for that game.  The player shall get to select one of two cards and one card will always win while the other will always lose.

The Double-Up feature, in terms of Expected Loss, is much the same as it is with the Odds bet on the game of Craps, but with a couple of differences in gameplay, which are:

1.)  In Craps, if you make a Line bet and a Point is established (i.e. the Come-Out roll is a 4, 5, 6, 8, 9 or 10) the player may make an optional Odds Bet which is limited to some multiple of the Line Bet.  In this case, the player has not yet won and will only win if the Point number hits prior to a seven.

The difference with the Video Poker double up feature is that the player, upon deciding to double-up, has already won the initial hand.

2.)  In Craps, the player may not, "Let it Ride," on a winning Odds Bet.  In other words, if a Point of 4 is established and hits with the player having 10x Odds, we'll say $50 on a $5 line bet, then the player shall win $100 and get his original $50 back.  The player may not choose to let any part of the Odds bet or winnings therefrom be bet again in the hopes that another four will come before a Seven.  The player must make a new Line bet and then make an Odds bet again, if he so chooses.

The difference with Video Poker is that the player may double his bet to such maximum (or maximum number of times) as allowed by the machine.  I don't know if there is a standard on Game Kings, but with the Spielo GTECH machines, the player may win a maximum of $10,000.

The above paragraph obviously does not include situations in which the Line Bet is decided on the Come Out roll (2, 3, 7, 11 or 12) and the House Edge on the Pass Line w/10x Odds becomes 0.184% according to Wizard's page:

This is no different than in Video Poker, in this respect.  The House Edge on the initial bet will remain the same, 1.5502% for 9/5 Jacks or Better, for instance.  However, if the player hits a pair of Jacks, for example, and then uses the Double-Up feature and loses, then the player made a $1.25 initial bet with an expected loss of .0193775, but then made another $1.25 with no House Edge cutting the House Edge on the total action to 0.7751% on the total money exposed.

Therefore, it doesn't change the House Edge or Expected Loss (in dollars) of any monies initially bet on the Video Poker game, much like the Line bet on Craps' Expected Loss isn't changed by making an Odds Bet.

Mr. Dancer summed it up best in his article with, "It is basically inconsequential."

Reasons to Double Up

For any sort of offer with a minimum time at machine required, Mr. Dancer points out that the Double-Up feature can be used advantageously to essentially, "Kill time," and make bets which are not exposed to a House Edge while the Expected Loss based on initial hands played shall remain the same.  That's absolutely true, but should be intuitively obvious to most people.

Mr. Dancer's article gets really interesting when he mentions a promotion by which a player would get a 28% Bonus on all wins triggering a W2G, which currently, would be $1200, or more.

The way this is most obviously useful is in the case of a player who plays at the quarters denomination.  Again, we'll say the game is 9/5 Jacks or Better.  The probability of a player being able to take advantage of this promotion, if the player chooses to continue playing at that denomination WITHOUT the double-up feature, is 0% because the player will not hit a taxable jackpot, given that the highest pay is $1,000.

However, let's say that the Double-Up feature was active and that the player chose to double on every win until hitting the lowest handpay possible based on the initial win:

The above formulas are simply the probability of hitting a given hand multiplied by .5 (probability of winning a double up) which is taken to the power of the number of double-ups necessary to win $1,200 on the base pay, or more, and then multiplied by the new win amount after the 28% bonus is applied.

This is as opposed to the 1.5502% disadvantage the quarters player would STILL be up against, even with such an incredible promotion in play.  The reason why is because ALL of the added Expected Value from a promotion such as this obviously comes from hitting the desired result, which is a jackpot of $1,200, or better.

Even a player playing at the $1.00 denomination of 9/5 Jacks or Better ($5.00/hand) still bucks a disadvantage of nearly 1% (Return to Player .990236) with this promotion and being unable to use the Double-Up feature.

Strangely enough, if the machine does not automatically lock up when a handpay amount is reached, a player could then ask, "Would you not have an advantage by doubling up to an even HIGHER handpay amount?"

The answer is, "No," because in terms of expected win, you're not getting anything extra from a percentage basis.  The reason for that is that the 28% is going to be applied to whatever the win amount is, not the previous win amount PLUS 28%, so 28% is always 28% and the change in expected return is nothing.  Let's look at that Royal on quarters again:

Okay, and if we double-up twice:

See, all we have done is doubled the win amount but cut the probability of winning in half compared to the previous amount, this is, quite literally, the same mathematical concept as .5 * 2 = 1

There was also one occasion, just that I am personally aware of, in which bets on the Double-Up awarded points at a casino.  That is no longer the case, and while the advantage was nothing even approaching 28%, there was still a small advantage to be had using the feature...particularly on multiplier days.