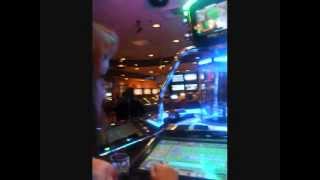 I was playing bubble craps the other day, on Aruze's "Shoot to Win" game. $1 minimum, 5x odds, making constant come bets plus max odds. Since the last time I played at Santa Fe Station a guy went on a 44-roll hand and I never pressed, I now press. Thankfully, it seemed nobody, including myself, could throw a seven today! I got up to $6+$30 and $7+$35 pretty quickly on a bunch of numbers, and everything was going my way, with a bunch of repeating points including a lot of outside numbers. There were also no come-out sevens, which I hate since I turn all bets on on the come out. The max bet is $250 total action, so I had to calibrate my come bets as to have a mix of $6 and $7 comes so I wouldn't run up against the table max ((7+35)*4=252). After all was said and done, I cashed out up $2,110. By far my biggest craps win ever, and one of my biggest wins of any stripe. After all the beatings I've taken at craps, it was nice to have things go my way for once... :) Best thing of all: no dealers to tip after the win!

What casino was this at?

We played a little at Sunset Station this weekend...and a LITTLE at Palazzo (it was a $5 minimum on bubble craps there!)

the first hot streak i got in Shoot to Win, i maxxed out at $250 which is FRUSTRATING when i want to press during a hot roll.

Then i found casinos w/$500 limit but i forgot which.

i've maxxed that out too :)

Love Bubble Craps. Have seen some very nice streaks in that game at Talking Stick in Phoenix.

There's an error on ONE machine at Eldorado in Reno...it has a $1000 max limit...although, with only Double-Odds, I can't see ever getting to it...

What a sick win! That is awesome, TeddyS!!!

Does that make up for losing the slot ticket :) ?

Lost a slot ticket today. $109.75. This is the second time this has ever happened to me. The first was for $65. Asked the slot attendant to look up the ticket. "It's been redeemed."

They did none of this?

Before I clicked on this blog my thought was '"Oh No, he played Blackjack "again !

Face: They did none of that.

I interpret your rage to be against the person who took the ticket, or yourself. Either way, I feel your pain brother.

Face - while in theory that would be the way these things should work, I can't ever recall Surv ever saying anything other than what Teddys experienced with lost tickets. Shoot, when I was pickpocketed, all security could tell me was check lost and found later. Lucky for me, most of my money was in chips in my pocket.

Was it all money you won, or was it what was

left over from losses.

I have the opposite of this story. Last year I found $4000 in rubber-banded cash on the floor in the casino. I immediately turned it in because I know it's a crime to just take something that valuable off the floor. I figured my best EV play was to turn it in and get some kind of reward.

Nope. The guy who lost it claimed it within 45 minutes. Surveillance verified that he dropped it. He didn't give me a penny.

I also did this once for about the same amount. After going through security, they also verified it had been redeemed. While they didn't cover the funds, they did give me a $100 dining credit which I thought was superb customer service!

I put in $100, so I lost my initial stake and some winnings. No dining credit; just a turn-and-walk-away from the slot att. Not that I had much respect for this casino to begin with...

Who do I complain to about this? :) 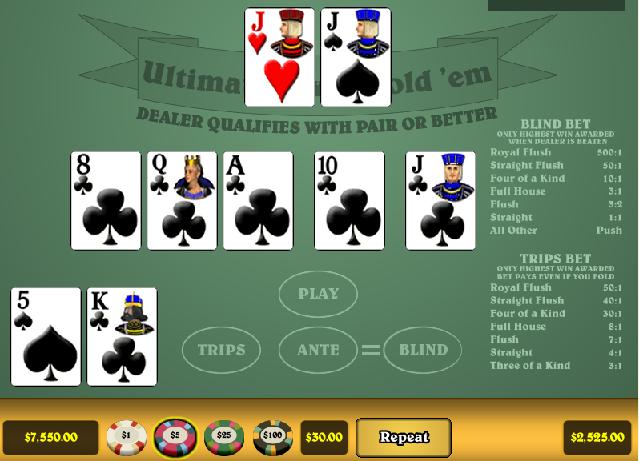 that's the problem with the Wizard, he never pays [g]

My luck is that I get royals on the computer, but never in real life...

A minor curiousity: 7-card hard sixteen on the Wizard's BJ game. Happens every 68,000 hands on average. If I had been playing at Stations Casinos, all players would have won the progressive jackpot on the "Hit-n-Run" sidebet. (Dealer must draw eight cards; doesn't matter if she busts). 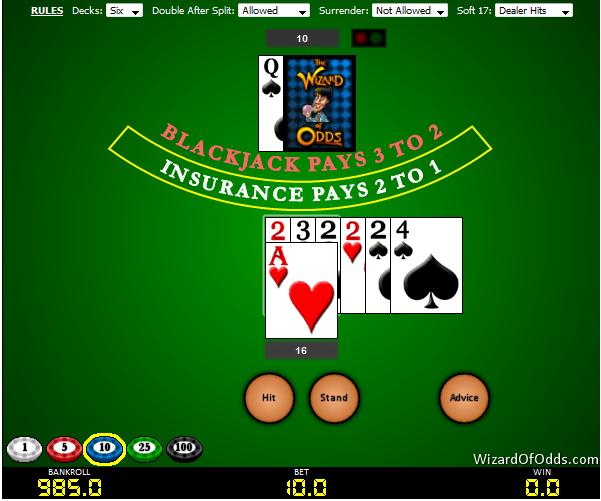 I always have to practice with the late surrender option on. If I don't I'll get to Vegas and forget.

A basic strategy exception says STAND on any hard 16 (3 or more cards).

What to do? HIT or STAND?

Yeah with this many little cards gone definately stand.

Got a royal on the Wizard's practice UTH game 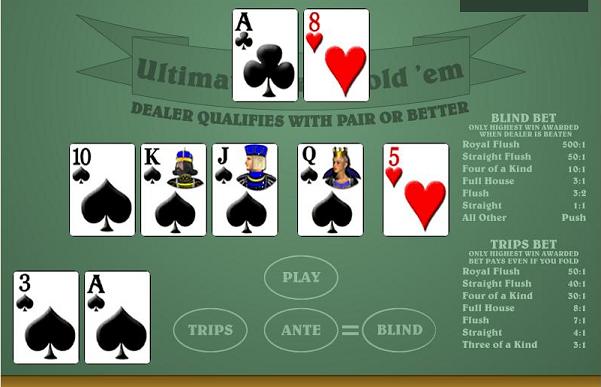 The VP game heard about your BJ play and was trying to even things out. LOL

That was very similar to how I hit my Royal at Southland. I had 10s-4, flop had the QsJs, KsAs on river gave me the Royal.

Congratulations! Don't spend all that money at one place.

Congratulations! Your real prize is dinner with the Wizard at Tacos El Gordo.

I had been playing that less than 12 hours before you posted, only the derecho blew through and knocked our power out! I could continue playing because the game was loaded so it didn't matter that my modem and router were out, but I wanted to save my laptop battery in case we were in for a looong outage.