The best home in Las Vegas

I think this compound is by far the best home in Vegas. Built for a cost of $60 million by Prince Jefri Bolkiah of Brunei. He loaned the compound to Michael Jackson for several months. Supposedly the price he spent on this compound is a tiny fraction of his total spending. He once spent $17 million on a birthday party. He has 500 properties, both in Brunei and abroad, more than 2,000 cars, 100 paintings, five boats, and nine aircraft.

The compound is at the corner of South Durango Drive, and West Hacienda Avenue. It is 6 miles west of Las Vegas Blvd on West Tropicana Ave.
gambler

gambler
Joined: Jan 11, 2010
I would pitch a tent in the corner and be very happy.
nyuhoosier

nyuhoosier
Joined: Feb 16, 2010
That looks like a lot of wasted water to me.
Nareed

Nareed
Joined: Nov 11, 2009
You have to ask yourself: do I want a place so large I need golf carts to move around?
Donald Trump is a fucking criminal
Brad

You have to ask yourself: do I want a place so large I need golf carts to move around?

That looks like a lot of wasted water to me.

He probably provides as much employment as some of the small hotels with pools.
Be careful when you follow the masses, the M is sometimes silent.
pacomartin

He probably provides as much employment as some of the small hotels with pools.

What does that have to do with wasting water or anything else? In Southern Nevada, there's almost no reason to have so much grass and greenery. It's unnatural here and the alternatives are so much better. Desert landscaping is just as beautiful, and artificial grass (if you prefer the look) is easy to maintain. Even the Wynn has astroturf out front.

And by "he," who are you referring to? Michael Jackson is dead and the prince is trying to unload the property, last I heard.
pacomartin

pacomartin
Joined: Jan 14, 2010
This 16-acre compound is the top water waster in Las Vegas. the water usage at this property would supply 108 average single-family homes each year.

Believe it or not he has a second compound which is smaller but no less luxurious in Las Vegas at (36.061718, -115.103323) which is about a half mile from Casa de Shenandoah, the well known home of the singer Wayne Newton.


Maybe because of his divorce and possibly because of his eyesight Steve and Elaine gave up the huge mansion. They simply live at the best rooms at the Wynn now. Steve Wynn's home means he probably loses a million dollars a year in rental, but it is 3000 square feet. I assume he can get room service from anyone of the restaurants. 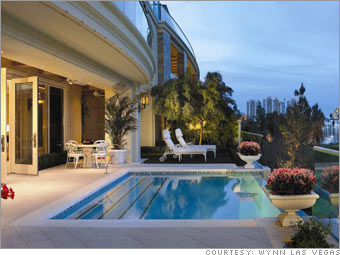 The divorce is seemingly amicable since they continue to live nearby and work together. Elaine got a huge chunk of the shares of the company, but Steve is still a billionaire. They were divorced and remarried once before and have known each other since they were teenagers. 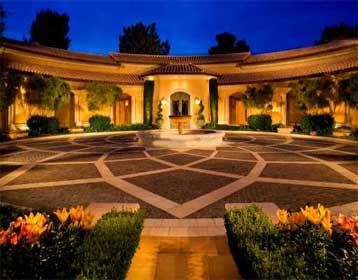 Steve and Elaine built a custom home in the middle of Shadow Creek golf course which they developed at Mirage Corporation. When the merger went through they had several years to sell their home. It was on the market for $28 million which would have made it the most expensive home ever sold in Las Vegas, but it seemed as if multimillionaires weren't interested in paying for this oddball property. There were only two homes on the golf course (the other belonging to the COO of Mirage) and the golf course is surrounded by modest homes often selling for less than $100K. I think he ended up selling to MGM-MIRAGE and moving into the Wynn hotel. Maybe a MGM-MIRAGE executive lives there now. The decor looks similar to the hotels anyway.
nyuhoosier

nyuhoosier
Joined: Feb 16, 2010
Thanks for the research on these properties. Interesting as always.
RSS Feed