This died in Vegas, and he brought the idea to the Bahamas, (where it apparently died again.) But there is still a web site for it, with lots of renderings and things:

I like the idea of a mob resort. Perhaps each room should have a decomposing hooker under the bed.

It had a brief life in Dubai as wel (as a non-gaming destination) as part of a 30K room Bawadi development (since cancelled).


The idea of 12,000 rooms, in a 5 star (presumably Mobil) 5 diamond (presumably AAA) hotel would by far be the most expensive resort ever built in the world.
Toes14

Toes14
Joined: May 6, 2010
I'd love an Entire Casino Complex with the Star Trek theme! (Still upset that Quark's closed a month before I went to LV last time!)
Yeah, it might do well for a little while, but I don't see it having a long shelf life.
"Bite my Glorious Golden Ass!" - Bender Bending Rodriguez
clarkacal

I'd love an Entire Casino Complex with the Star Trek theme!

Me too! I wonder if Star Trek fans gamble more or less than the average person?
7outlineaway

Me too! I wonder if Star Trek fans gamble more or less than the average person?

Sensors indicate that participating in a negative expectation game would be highly illogical.
pacomartin

Me too! I wonder if Star Trek fans gamble more or less than the average person?

I don't know, but I always felt that Fitzgerald's would be a good purchase if the Star Trek Experience opened up next door at Neonopolis in downtown Vegas.

Don Barden, of Barden Nevada Gaming LLC acquired three Fitzgerald Properties in December 2001. He reported $48 million of gaming revenue in 2002, and after that made the property a privately owned company and never reported the earnings again. I have a pretty good idea of what revenue is today.

Personally, I think that Star Trek fans read sites like this one more than the average person. You could cater to them with the nearby casino.

On May 7, 2008 Standard & Poor's reported that Barden, through companies he owns, pledged $35 million. based on his ownership ofFitzgeralds to restructure debt on the Pittsburgh slots parlor. Don was subsequently shut out of the deal for the PA casino. 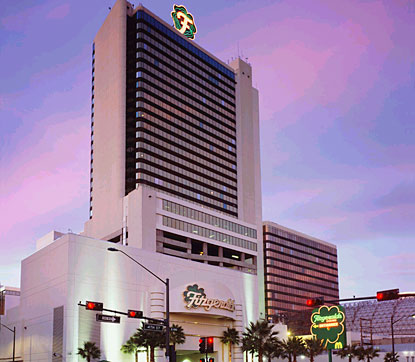 rxwine
Joined: Feb 28, 2010
I'd have a building in the shape of giant pink pig. It would snort steam out its nostrils on the hour.

Well, it's a better idea than a giant roach hotel.
The Hall of Unverified Claims is a vast place with many shelves.
JIMMYFOCKER

JIMMYFOCKER
Joined: Jan 24, 2011
THE MOON Casino would have been very neat.
Nareed

Personally, I think that Star Trek fans read sites like this one more than the average person.

We could poll for that...
Donald Trump is a fucking criminal
RSS Feed