aahigh
Joined: Dec 10, 2010
This whole thing has the hallmarks of a publicity stunt, and if there were a financial impact on MGM, it was positive. 1.5 million is 0.02% or 1/4666th the market cap of MGM (the publicly traded company that owns Bellagio).

The stolen money itself means nothing to MGM shareholders, as they are way more worried about the multiple percentage points up and down each day due to regular market forces in the stock market.

So do you think they care more about 1.5 million disappearing on Wednesday, or 888 million appearing the following four days? 888 is very lucky methinks to some people in a certain country.

I'm not saying the publicity caused the market to buy up shares and/or that the Chinese set this up as an insider trading scheme. I'm just saying "it doesn't matter" .. except for the publicity, and the public has totally eaten up this story even more than the Cosmopolitan opening.

I went to google news and typed in "bellagio vegas" between December 15th and today compared to "cosmopolitan vegas" for the same time period (using advanced searching options). The results:

About 600 new stories on cosmopolitan vegas in that time frame


If Bellagio lost 1.5 million to get all that news, how much do you think Cosmo spent to get less than half the coverage. Let's not even talk about the whole foreclosed property etc .. just marketing...

Oh well. Anyway, just a thought to add to the mix.
RaleighCraps

So, am I to infer that you think the reason why there was no security chase, was because Bellagio was in on it? I'm not calling you out, or asking you to defend that position, I'd like to go in another direction....

Let's assume for a minute that were true. How many laws would a stunt like that break?
Always borrow money from a pessimist; They don't expect to get paid back ! Be yourself and speak your thoughts. Those who matter won't mind, and those that mind, don't matter!
Ibeatyouraces

http://wizardofvegas.com/forum/gambling/betting-systems/3817-a-foolproof-method-for-robbing-a-casino/
For Whom the bus tolls; The bus tolls for thee
Keyser

Keyser
Joined: Apr 16, 2010
To say that this chip robber has pissed off poker players and AP players is a gross understatement.
Wizard
Administrator 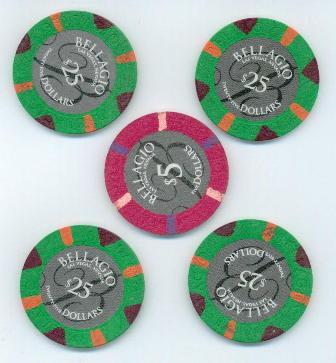 I have not played there in about five years, and even then it was only for an hour or two. So it will be a hard sell that I got these at the tables. At least it will make for a good story when I go there and try to cash them. I'll keep you posted.

To say that this chip robber has pissed off poker players and AP players is a gross understatement.

If they refuse these chips, you can add me to that list as well.
It's not whether you win or lose; it's whether or not you had a good bet.
mkl654321

Oh, for crying out loud, look at what I just found in my drawer.

If they refuse these chips, you can add me to that list as well.

But are those chips now different from the ones they're presently using? If not, you should have no problem. If so, they'll tag you as the "Really Dense Bandit" who five years ago rushed up to a blackjack table, grabbed a couple of handfuls of the lowest denomination chips, and sprinted for the exit, and security will grab you and take you down to the Players We Don't Like Detention Facility in the basement.
The fact that a believer is happier than a skeptic is no more to the point than the fact that a drunken man is happier than a sober one. The happiness of credulity is a cheap and dangerous quality.---George Bernard Shaw
Ayecarumba

Oh, for crying out loud, look at what I just found in my drawer.

I don't expect that you will have any problems Wizard. Just be sure to leave the motorcycle helmet at home.
Simplicity is the ultimate sophistication - Leonardo da Vinci
Wizard
Administrator

But are those chips now different from the ones they're presently using?

Yes, they are different. These should be the same style that was stolen in the robbery. After the robbery they switched to a style they had sitting in the vault for such occasions. The only thing that works in my favor is it is $105 only. For all they know, I'm fencing these chips for the real robber.
It's not whether you win or lose; it's whether or not you had a good bet.
Ayecarumba

For all they know, I'm fencing these chips for the real robber.

Hehe, one down, only 1.6M more transactions to go...
Simplicity is the ultimate sophistication - Leonardo da Vinci
RSS Feed