PokerGrinder
Joined: Apr 30, 2015
I was there after midnight so everything was closed.
You can shear a sheep a hundred times, but you can skin it only once. — Amarillo Slim Preston
PokerGrinder

Today's chip of the day is from Cahuilla Casino in Anza, California. Cahuilla Casino opened on May 27, 2020 and replaced the former Cahuilla Creek Casino. Cahuilla Creek opened in 1996 and construction on its replacement started in 2018. Cahuilla is a small casino with 335 slots and if I remember correctly 6-7 table games. I made the 65 minute trek down the very windy roads from Palm Springs to grab a chip here when I visited my friend earlier this year in Palm Springs. There wasn't much in the way of machines for me to play and I only played a few hands of BJ with a few guys who were quite intoxicated.

The chip is a white chip from an unknown maker. Its completely smooth and feels quite light. The chip has 4 black edge inserts with mostly gold slashes between them except the one section with a solid chunk of gold. The centre of the chip is white with gold writing around it listing the casino name twice. I looked it up but can't figure out what to call the triangle/square/star shape the the deom is listed inside of. 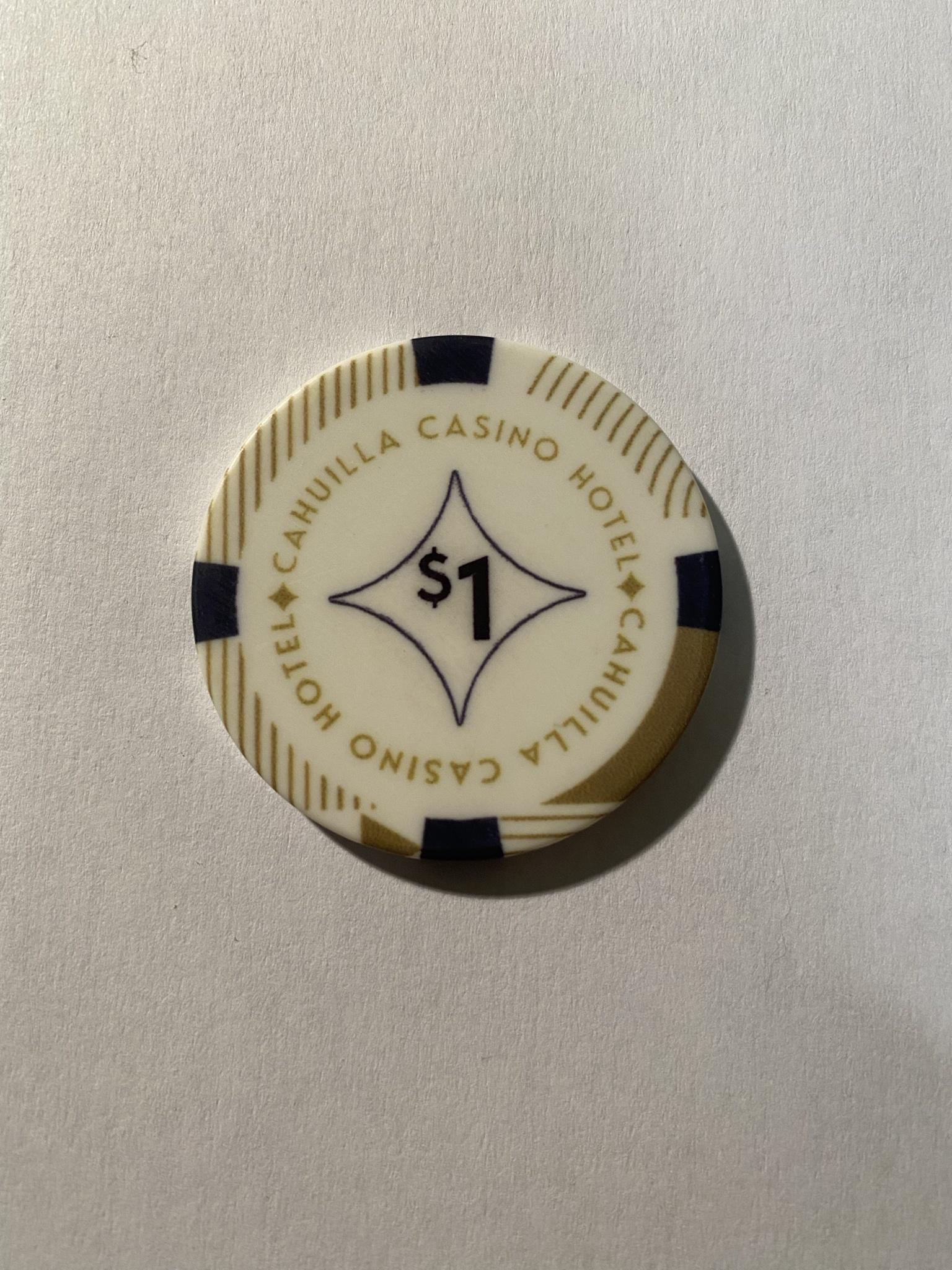 You can shear a sheep a hundred times, but you can skin it only once. — Amarillo Slim Preston
Dieter
Administrator

Dieter
Joined: Jul 23, 2014
I would refer to the figure as a curvilinear cruciform, but that's quite cumbersome.
May the cards fall in your favor.
PokerGrinder

PokerGrinder
Joined: Apr 30, 2015
Ok, so I had to look that up and I got nothing that looks like that shape. Would you mind explaining because I am intrigued.
You can shear a sheep a hundred times, but you can skin it only once. — Amarillo Slim Preston
PokerGrinder

Today's chip of the day is from Jamul Casino in Jamul, California. I posted the original name of the casino in May, 2017 and then less than a year later in March, 2018 they rebranded from Hollywood Jamul to just Jamul. Drop the "Hollywood" just Jamul, it's cleaner (not sure if this joke will hit home with this crowd). I tried to find the reason for the split between the tribe and Penn National Gaming but only came up with something about financial problems. The article wasn't clear which side was having the financial problems and which side initiated the divorce. The casino has the same amount of slots and tables but I can't say how different it is now vs the first time I visited as I don't remember the first time that I visited. Two friends and I took a impromptu trip to SoCal when we got wind of an extremely lucrative play that was gone by the time we got there. We stayed one night before driving back to Vegas and almost immediately flying to Fort Lauderdale. One of my friends and I decided to go check out Jamul and ended up playing a really good 2/5 game that they had running in the poker room. I grabbed my chip while playing cards.

The chip is a white RHC with 2 green edge inserts. The centre inlay is turquoise with white writing for the casino name and denom. The logo looks to be a water drop with a "J" inside of it. 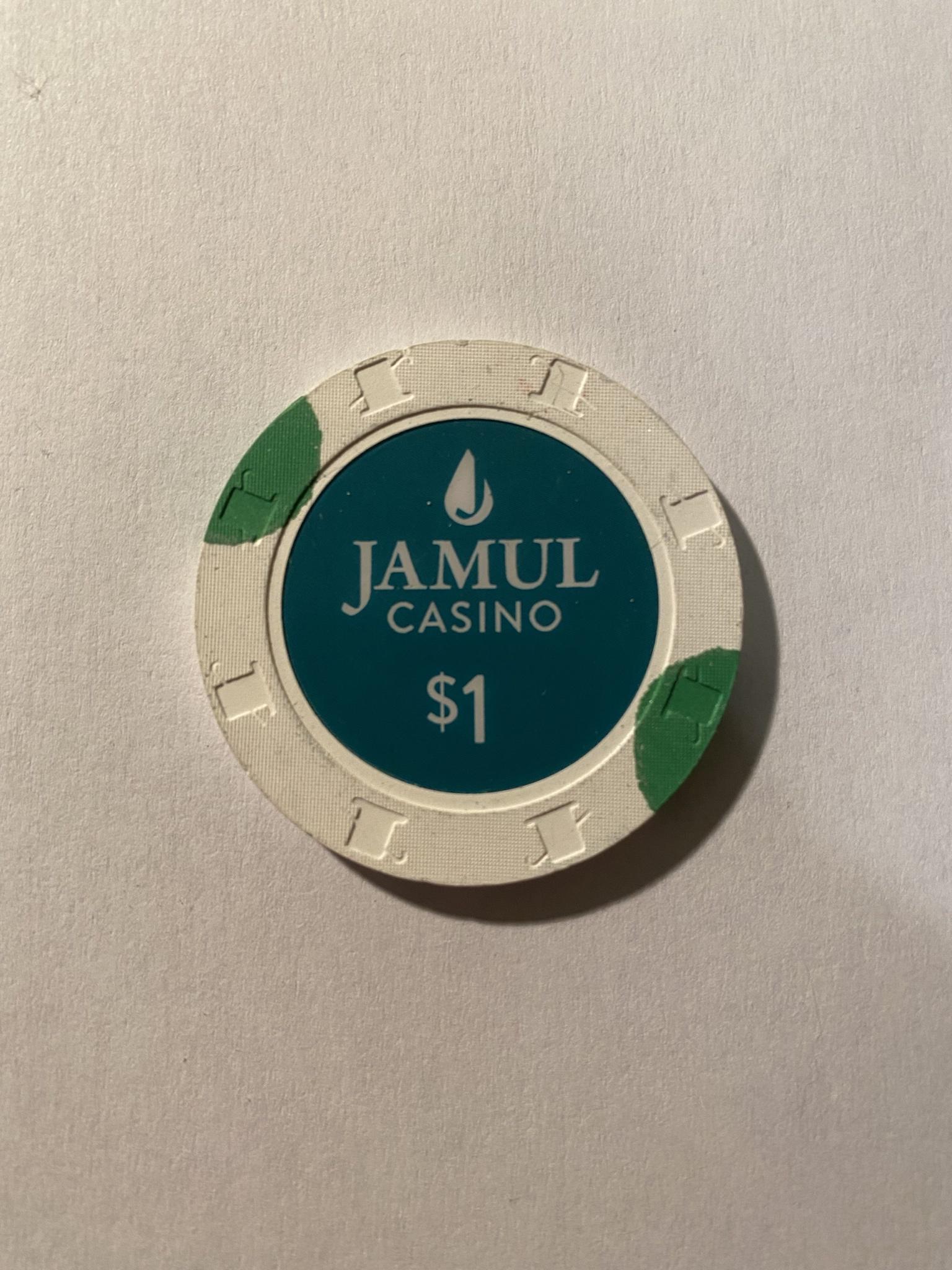 You can shear a sheep a hundred times, but you can skin it only once. — Amarillo Slim Preston
Gialmere

Doc
Joined: Feb 27, 2010
No, I was not familiar with that term for the shape, either. Thanks. A brief search led me to this web site, which offers both a nerdy discussion of the mathematics and several additional names for the shape.
Dieter
Administrator

Ok, so I had to look that up and I got nothing that looks like that shape. Would you mind explaining because I am intrigued.

"Curvilinear" means instead of straight edges, the figure has curves.
It's a concave curvilinear "square", which I find vaguely cross shaped.

But hey, if it was easy, we'd all immediately recognize it as a bananagram, or whatever name was common. :)
May the cards fall in your favor.
PokerGrinder

Today's chip of the day is from Oaklawn Racing Casino Resort in Hot Springs, Arkansas. This chip is a weird one in that I never thought I would be back a second time, Due to gaming regulations changing both racetracks in Arkansas were allowed to bring in a full assortment of table games. I couldn't find anything about whether the slots were Class II the first time I visited the facility. I found a bunch of slots to play for 3-4 hours when I got there and made a good chunk of cash. I then stopped into the table games pit to play a few hands of $25 BJ. I saw a very odd thing, a younger guy kept buying in for $50 in singles over and over. I'm not sure if it was drug money or maybe a stripper but it was annoying the full table of players and the dealer.

Normally I need a significant name change to collect a new chip. I have debated this one for a while but settled on it being a new one as it wasn't a casino before. Years ago I struggled with Ballys Saloon and Gambling Hall in Tunica when they changed to Ballys Casino. I was leaning towards not collecting the new chip but I think if I was in the area I would have. It didn't end up mattering because soon after that subtle name change they were sold and renamed 1st Jackpot which fixed my dilemma. I have since collected the chip from 1st Jackpot.

The chip is a white RHC with 3 split blue/green edge inserts. The centre inlay has a blue border, a gold ring and a white middle. The casino name and denom are in black on the white with the casino logo of 4 jockeys above the casino name. The location is listed in white on the outer blue portion of the inlay. 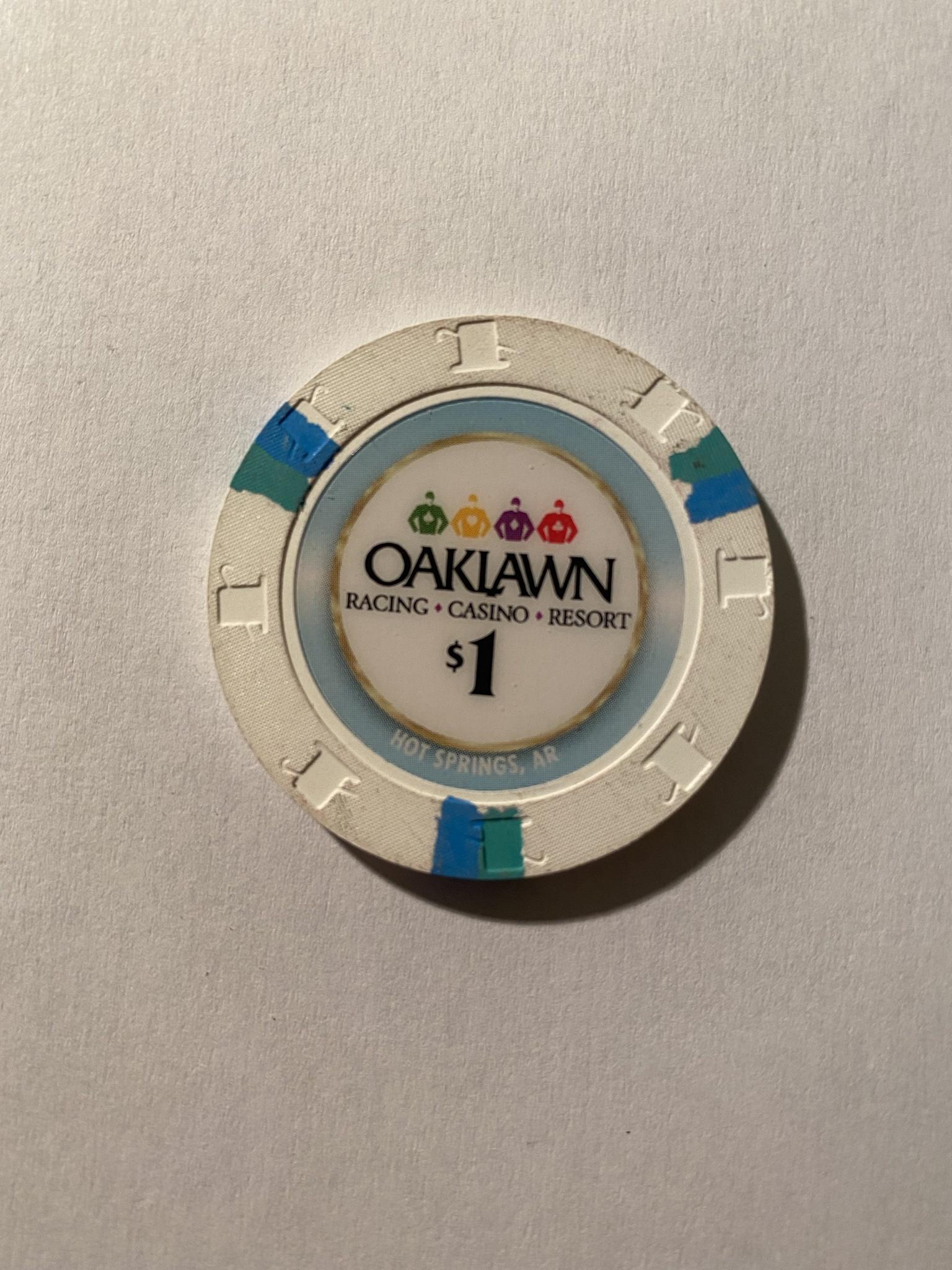 PokerGrinder
Joined: Apr 30, 2015
Doc I have noticed that you listed the original Oaklawn chip as 'Oaklawn Park" The chip makes no mention to "Park" and neither does the chip guide or the casino website. I'm not sure why you have it listed that way. As far as this chip and that chip I have no idea how you want to differentiate the two chips in the index.

P.S 4 days in a row that I posted a chip!!! (Don't get used to me remembering)
You can shear a sheep a hundred times, but you can skin it only once. — Amarillo Slim Preston
RSS Feed