PokerGrinder
Joined: Apr 30, 2015
Something like chips are meant to be made for use on tables and $8 chips have no reason to be played on a table.
You can shear a sheep a hundred times, but you can skin it only once. — Amarillo Slim Preston
smoothgrh

I collected this chip in August 2015 on a cruise from Ft. Lauderdale, Florida (my only trip to the Sunshine State) to ports such as St. Kitts; Basseterre; and San Juan, Puerto Rico. At some of the ports, I saw casinos (such as in San Juan) and popped in to look around, but back then I wasn't cognizant of documenting my visits.

On this trip, my family and I were with two other families, and the Mrs. was in the first week of her Executive MBA program, so she was studying most of the time while I tended to the kids. So mostly family time and little gamblin' time. After the cruise, we went to Disney World. Years later, a kid of our friends said his classmate told him it's weird that he goes on vacations with his parents' friends. 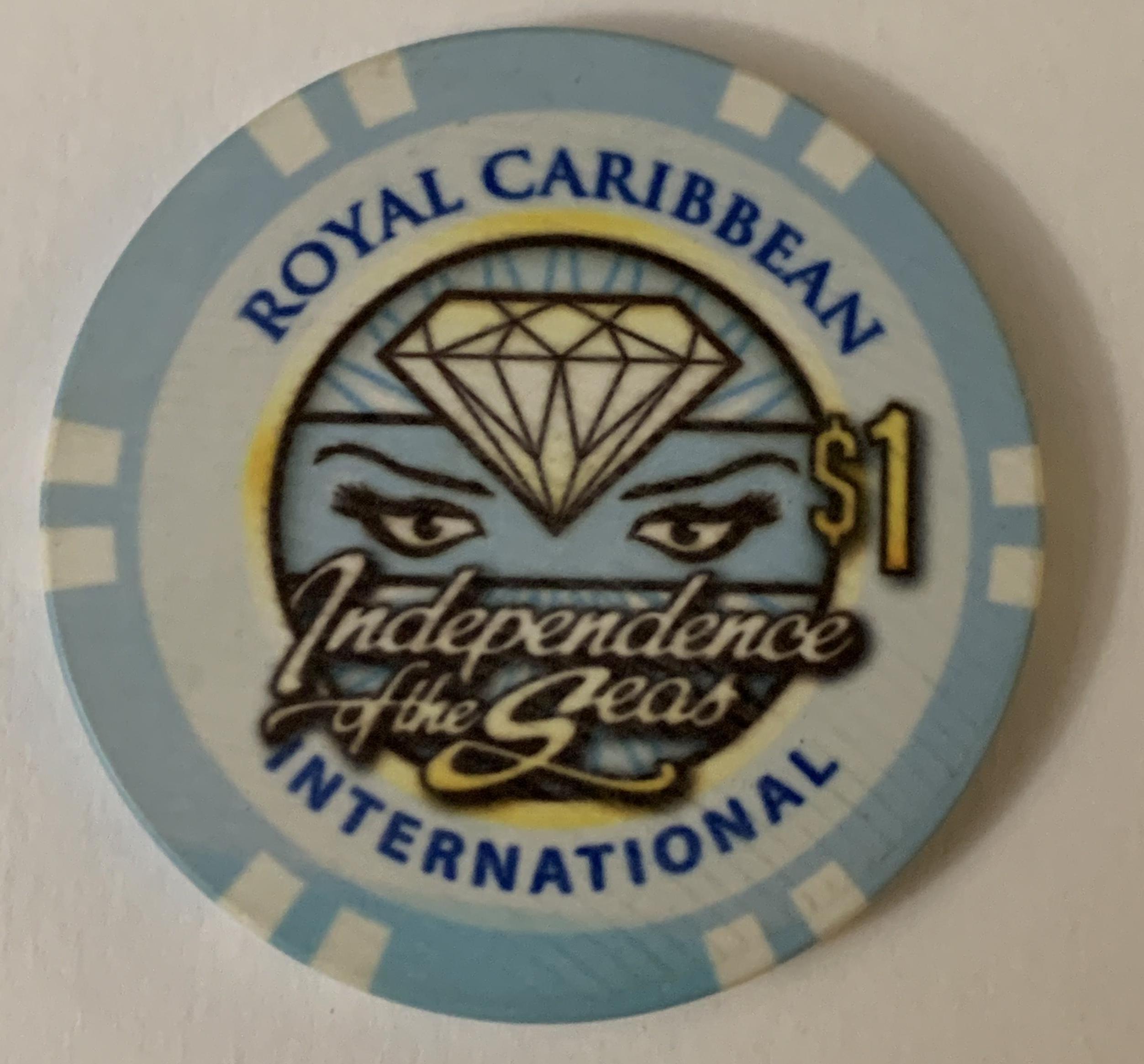 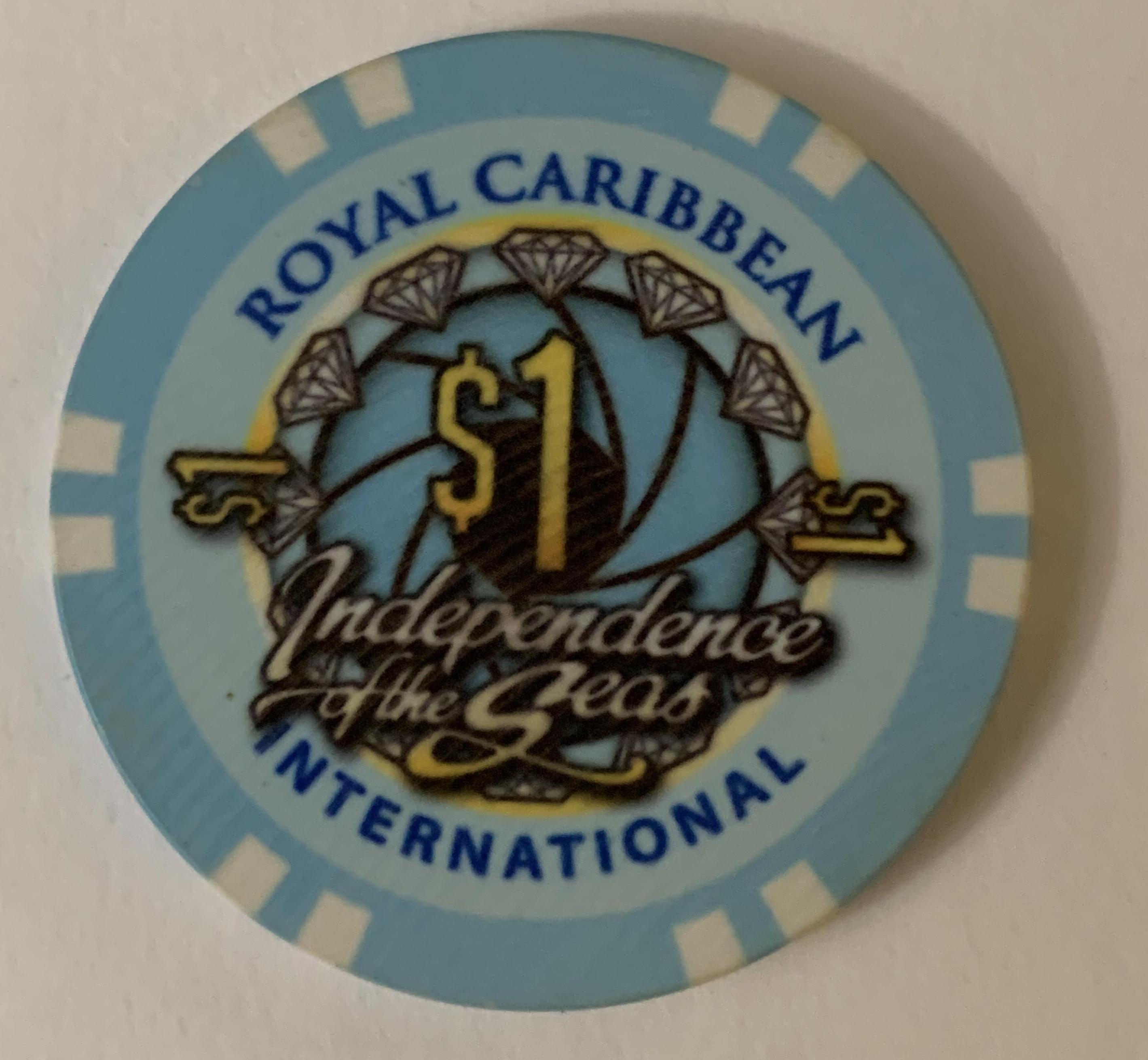 The back (I assume) of the chip has a design that looks something like the shutter of the James Bond opening gun spiral—or is that supposed to be some kind of sea shell?

I believe this is the last chip in my collection that's unique to the CCotD thread—unless you want to see variants like a chip with the updated Ellis Island logo.
Last edited by: smoothgrh on Feb 12, 2020
Doc

Thanks for the new "wet chip" smoothgrh (that's what they call the ones from casinos on boats, either cruise ships or day-excursion boats.) I believe this chip and the one you posted last month from the Seven Feathers casino in Canyonville, OR are the only new casinos for this thread since some I posted late-September or early-October from my own cruise to the Caribbean last September.

It really seams the thread has gotten quiet. Maybe some day Ayecarumba will post the chip(s) he has promised us or PG will post 50 or so chips from another international excursion.

We did exchange comments in the Palm Springs thread about a possible collecting opportunity there. If you can verify that opportunity when you visit there, I am still considering the possibility of picking up my own souvenir as part of the Spring Fling trip. We are booked to fly into Las Vegas on Wednesday afternoon before the main events, and (while it would be a bit of a driving burden for me and a real annoyance to my wife) we could drive down to Palm Springs on Thursday and back to Las Vegas on Friday. Do the folks in Palm Springs still run a street fair every Thursday evening?
PokerGrinder

PokerGrinder
Joined: Apr 30, 2015
Well my Asia trip was cancelled because of the budlightvirus issue right now. Next chips collect will be around the spring fling stop in Vegas then Washington and Oregon in June. What Palm Springs chip is possibly new? The new caliente casino that isn’t built yet?
You can shear a sheep a hundred times, but you can skin it only once. — Amarillo Slim Preston
Doc

PG, do you have more info than smoothgrh has at the moment?
PokerGrinder

PokerGrinder
Joined: Apr 30, 2015
Oh I actually did see that and checked the chip guide but found nothing.
You can shear a sheep a hundred times, but you can skin it only once. — Amarillo Slim Preston
Doc

Same as I found. That's why I asked smoothgrh to check it out for us while he was in town.
smoothgrh

On the Royal Caribbean chip, in addition to the spiral, I find the back of the chip odd in that it’s a darker shade of blue than the front.
Last edited by: smoothgrh on Feb 14, 2020
Doc

Doc
Joined: Feb 27, 2010
With regard to the back of the chip being darker blue than the front, are you referring specifically to the center area (iris or James-Bond-intro gun barrel) or to the entire back? If just the former, I might make some stupid remark like "it's just the shadow inside the gun barrel." More seriously, I would just consider that evidence of different tones -- which could as well have been completely different colors -- in different parts of the image. Now, if all of the blue looks darker, which is not obvious to me from the photos, then it could represent fading of the chip over time.

My wife and I have only been on one cruise with Royal Caribbean, on the Vision of the Seas, and I posted my souvenir chip here. That chip is a completely different design than yours from Independence of the Seas, so I can't make any meaningful comparisons. Since I have not been on their other ships (yet), I have nothing to offer. This thread has one other Royal Caribbean chip posting, but PhotoBucket seems to want to obscure the chip image that wezvidz provided us from the Majesty of the Seas.
smoothgrh

Bad news: The chip is the same as the Agua Caliente/Spa Casino chip previously featured.

A cashier told me the name change happened about a year ago.

I lost money—but overall had a good time.
RSS Feed