FYI to the poster above, I have about 12 more chips then you can take over.

I hit up this casino on a weekend trip from my home area of West Palm to the Ft Myers/Naples area. Went specifically to go to a few poker room/dog track combos and to see Brian Regan perform standup in Ft Myers.

After a long boring drive through the nothingness of alligator alley, I found this place before getting to my hotel back at civilization. This is located in the middle of nowhere in south central Florida. Don't remember much other than it was a pretty nice place for being in small town nothingness.

FYI to the poster above, I have about 12 more chips then you can take over.

Excellent! Please let us know when you have reached the end, and we can try to keep the thread going for a while longer without interruption.

In case some of you haven't noticed yet, AcesAnd8s has changed his screen name to DeadMansHand to avoid confusion with AcesAndEights. His name has been changed on each of the few posts that he made before the change, but the original name still appears in my post where I quoted him. We look forward to the rest of wezvidz's chips to be followed by those from DeadMansHand.

I have seven new chips myself from my recent trip, but five of them are from casinos that rdw4potus has already covered. I will post those five chips together once I get the photos taken, and I will add the other two in posts of their own after DeadMansHand finishes posting his chips.

I think we really should be discussing the manufacturers of some of these chips, and maybe some of their features. The chip from Seminole Immokalee is a Paulson Reversed Hat and Cane chip, just like the very first chip posted in this thread and many others. The chip from the Isle casino in Pompano Beach is obviously from Chipco International, since the CI logo can be seen at the 4:00 position. The chip from the Majesty of the Seas is Icon's split-6 design.

The chips from the Westerdam/Card Player cruise, the Miccosukee, and the Island Breeze all look like Chipco chips, too, but I mustn't jump to that conclusion too quickly. Chipco has gone out of business, with some of the (former) employees opening up the Game On Chip Company, which makes ceramic chips very much like those that were from Chipco. Their web site even has a page that shows an Isle Pompono Beach chip that is identical to the Chipco one that wezvidz posted except that it has a "GO" logo instead of a "CI" logo. Without the logo visible, I have no idea how to tell which company made these chips.

I'm not sure of the source of the Palm Beach Kennel Club chip. The MOGH catalog says it is from Bud Jones, but they tend to attribute all plastic injection molded chips to Bud Jones, sometimes even when there is a visible logo from another manufacturer. They could be right this time, but I don't see a logo, and I'm not sure.
Doc

Doc
Joined: Feb 27, 2010
I finally got around to photographing the chips I collected on my recent trip to Niagara Falls, Ontario, with casino stops in Canada, Pennsylvania, New York, and Ohio. As I noted yesterday, five of my new chips are from casinos that rdw4potus has already covered in this thread. He posted the $5 chips that he collected, so below are my photos of the $1 chips from the same casinos. As always, click on any image to see the larger version.

Presque Isle Downs, Erie, PA. This is a white Gemaco chip, with the "G" logo evident between the denomination and the city/state. The only thing on this chip that fluoresces under UV light is the overall center inlay. 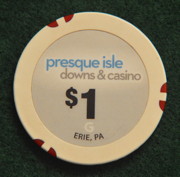 Horseshoe, Cleveland, OH. This is a white Paulson SCV design with three edge inserts in green, orange, and whatever you want to call that other color -- olive? Khaki? Under UV light, the green insert fluoresces in more of a blue tone than is evident in the photo, and the Paulson logo appears in the center.

Hollywood, Columbus, OH. This is a white Paulson RHC design with four wide edge inserts, two in green and two sort of peach. The city and state are printed so small that they are nearly impossible to read. Under UV light, the green edge inserts fluoresce, and the Paulson logo also appears in the center. 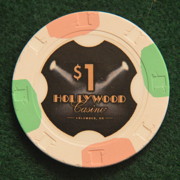 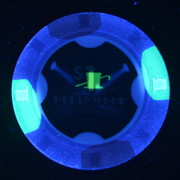 OLG Casino Brantford, Brantford, Ontario, Canada. This is another white Paulson RHC chip, with four narrow edge inserts in green and pale blue. Under UV light, the Paulson logo appears in the center, with nothing else fluorescing. In fact, the edge inserts are almost completely invisible under UV light. 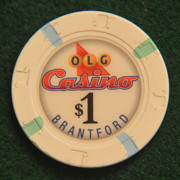 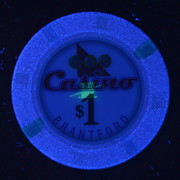 Great Blue Heron, Scugog Island (Port Perry), Ontario, Canada. This is a white Bud Jones plastic injection molded chip with purple markings and a rather pretty center inlay, including the image of the heron. The BJ logo shows up under UV light. 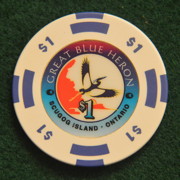 I'll post the other two chips I collected -- one from New York and one from Pennsylvania -- when it is again my turn to take the lead very briefly.
wezvidz

"A long time landmark and popular recreational facility on Florida's southwest coast, the race track operates year 'round with greyhound racing, full card simulcasting of dogs and thoroughbreds and a casino-style Poker Room. "

A continuation of my trip spoken of above that took me west across Florida from home in West Palm to Ft Myers.

As is a big theme in Florida, this is my second race track/poker venue chip with quite a few more to come. The poker at these places are the fishiest games I've played anywhere in the country. I played a short 1/2$ no limit holdem session to collect the chip.

Last chip from my Ft Myers collecting trip. Another of the numerous casino cruises Florida offers.

I will post another chip from a cruise out of the Tampa area soon which was a pretty terrible experience where you take a ferry out to an anchored ship. This ship is similar to the WPB & Victory cruises posted earlier where you rode the ship itself out to international waters then gaming began. The experience wasn't very memorable, good or bad.

The Naples Fort Meyers chip certainly looks like a Chipco International product, but there is no clear ID. Of course it could be from Game On Chip Co., if it is rather new. The Big M chip is, naturally, a Paulson RHC model.


Unless, I miscounted, this latest chip represents the 700th casino covered in this thread. Another milestone.
Riva

Doc
Joined: Feb 27, 2010
A couple of months ago, I tried to give some advice on that topic, specifically related to posting chip images:

The trickiest part is that the forum doesn't provide space to store the images -- you need to have the image hosted on a publicly-accessible site elsewhere on the web and link to it in your post. I host my images at my own domain; rdw4potus and others have used Photobucket.com, and Nareed recently used Google photos (with just a little difficulty). Once you have an image stored and available for the link, check out the formatting codes that are available (click on the "Click here for formatting codes" link right below the frame where you enter a new post). You can also look at the details of someone else's post of an image by clicking on the quote button for their post -- examine their post and then hit cancel.

BTW, some of us post just a small image of the chip to appear directly in the post, with a link that lets you see a larger image by clicking on the small one. If you have the images in two different resolutions (I use 180x180 pixels for the small ones and 600x600 pixels for the large ones), check out one of my chip posts to see how to combine the image post with a link to another image.

If that isn't a clear enough explanation, let us know and someone will try to do a better job.
Nareed

How do you post pics on this forum? Thanks