Ayecarumba
Joined: Nov 17, 2009
Are all the chips in the Bahamas in US Dollars? Are there chips for other currencies like those used in some casinos in Canada?

In Aruba, I know that some of the coins are not round, they are square with rounded corners:

I wonder how this works in vending or coin counting machines?
Simplicity is the ultimate sophistication - Leonardo da Vinci
Doc

Doc
Joined: Feb 27, 2010
The Bahamian dollar is pegged to the U.S. dollar 1 to 1. I don't suppose it really matters as to which currency you use to interpret the chip denomination. In most transactions, merchants will accept either currency and are prepared to give change in either.

I'm not certain whether that is the case in casinos, and my information is quite out of date. When I first visited the Bahamas in 1976 and visited the Britannia Beach Hotel and the Paradise Island Casino, our taxi driver said that by law the Bahamians were not permitted to gamble in the casinos. I think they were even barred from entering unless they were employed there. I don't know whether that is still the law, but I noted a similar set of restrictions in Egyptian casinos in the early '80s.

With that being the case, I don't know whether they readily accept Bahamian currency in the casinos. I know that in Egypt they would not accept the Egyptian pound, but I suspect that had much to do with the fact that the official exchange rate was far different than the street exchange rate. It was "illegal" to exchange currency at anything but the official rate, but most non-bank exchanges were at, or close to, the prevailing black market rate in the currency.
vendman1

Are all the chips in the Bahamas in US Dollars? Are there chips for other currencies like those used in some casinos in Canada?

In Aruba, I know that some of the coins are not round, they are square with rounded corners:

I wonder how this works in vending or coin counting machines?

I own a vending machine company; and I can tell you that, any coin, that is any shape other than round is a total cluster f**k for any vending machine or coin sorting machine.
Obviously all US coins are round but you'd be amazed at the number of foreign coins I get jamming up my equipment.

Sorry to be off topic a little Doc.
Nareed

Sorry to be off topic a little Doc.

Once upon a time, we had a hexagonal ten peso coin. And Israeli payphones used a token with a slot and a hole in it, really weird. Anyway, I'd love to have one of those square coins. I gave up on numismatics a long time ago, but I've kept, sort of, some odd coins and notes.
Donald Trump is a fucking criminal
Doc

Several of the cruise ships my wife and I have sailed with have stopped in Charlotte Amalie, St. Thomas, capital of the U.S. Virgin Islands. On at least one of those cruises, we took a ferry excursion over to St. John, separated by just two miles of open water. However, until 2009 we had never visited the third island of the territory, St. Croix, about 40 miles to the south.

Our dining table mates on that cruise were quite jealous, because for our first two stops out of San Juan (St. Croix and Nevis) I had exploited personal contacts and had private guides to show us around the islands. In St. Croix, the guide was a friend of a friend of a friend, but it was a free, individualized, guided tour of the island, and I don't think any of the other passengers on board had anything like that worked out in advance.

At the east end of St. Croix, they have a monument marking Point Udall, named for Stewart Udall, U.S. Secretary of the Interior in the 1960s. The monument notes that this is the easternmost point in the United States. That designation, of course, is in terms of travel, not longitude, since there are several U.S. locations (e.g., Guam and some of the Aleutian Islands) barely in the eastern hemisphere but generally viewed as western extremes of the U.S.

I have found references to several casinos in the U.S. Virgin Islands, but I believe that all but one are slots-only facilities. The lone exception with table games is the Divi Carina Bay Resort and Casino on the southeast coast of St. Croix. The all-inclusive resort lies right on the beach at Turner Hole, while the casino is across South Shore Road, still close enough to overlook the water. No, casino expenditures are not part of the "all-inclusive" fee for the resort.

CasinoCity.com says that this casino has 360 gaming machines, 2 poker tables, and 16 other table games. The casino's own web site is not that specific as to what they offer.

I think the casino is named for the Caesalpinia coriaria, a tree native to the Caribbean that has several common names including Divi-divi. Other than this one resort, I cannot find any references to a Carina Bay in this area, though I found several in Australia.

When I posted my chip from the Treasure Bay Casino in Biloxi, MS, I mentioned that it was the only one of the half dozen casinos owned by Treasure Bay Gaming and Resorts that is located in the states, with the rest in the Caribbean. Well, Divi Carina Bay Casino in St. Croix is one of those Caribbean casinos. They also own the Alhambra in Aruba, a casino from which I posted a token a week ago, even though I have not yet played at that casino, as well as another casino that this thread will get to about a week from now.

Our private guide looped the island with us, and accommodated my request for a brief stop as we were passing Divi Carina Bay. I played blackjack (the craps table was closed in the middle of the day) and lost $25. At the table, I was surprised enough that it stuck in my memory, when the dealer complimented my wristwatch and identified it as a Citizen with an Eco-drive. I wondered what kind of casino dealer pays close enough attention to wristwatches to be able to recognize one from across the table. It wasn't as if I was wearing a Rolex or even an Omega.

The souvenir chip I kept is a blue and white plastic chip with a center inlay that displays a large black fish swimming above the waves! Flying fish? Doesn't look much like one. 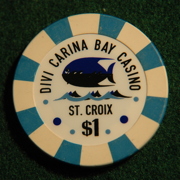 After we left the Divi Carina Bay, our guide took us to a tour of the Cruzan Rum factory and then to the rain forest where there is an open-air bar called the Mt. Pellier Domino Club, which has a very amusing side show. For some years they have kept beer-drinking pigs in pens just across the parking lot, and these swine put on a show that has grown a reputation far and wide.

It's not as if they lap the stuff out of a bowl. Customers looking for a show buy a can or three of brew at the bar and feed it unopened to one of the stars. Recently, the owners of the bar have been suggesting O'Doul's, to keep the hogs a little better behaved. Now these aren't cute little piggies; these are huge porkers, standing better than three feet high with all four hooves on the ground. And they come equipped with molars that enable them to crush the can, guzzle the contents, and spit out the residual metal for recycling.

You can easily Google this topic and find a variety of videos, but I'll just offer two still snapshots, one of my wife dropping the can into the waiting maw and quickly pulling her fingers back, and the other showing the aftermath of the chomp. 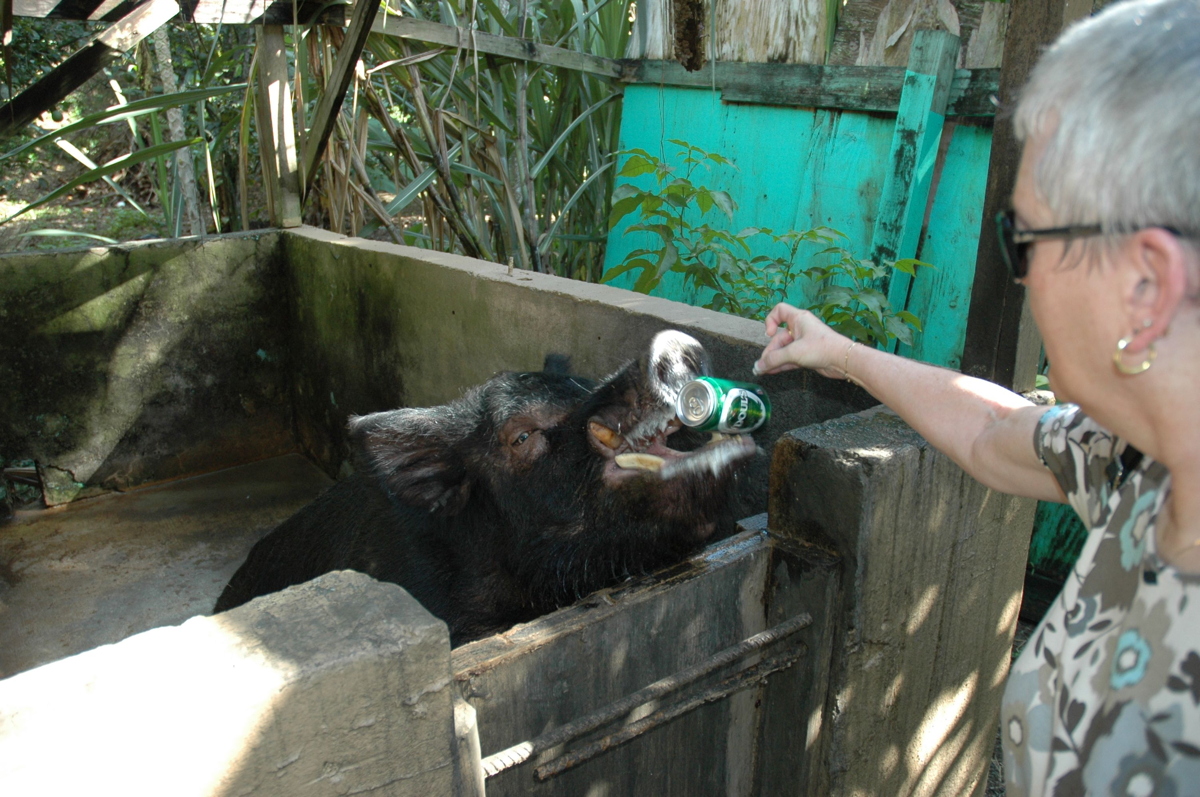 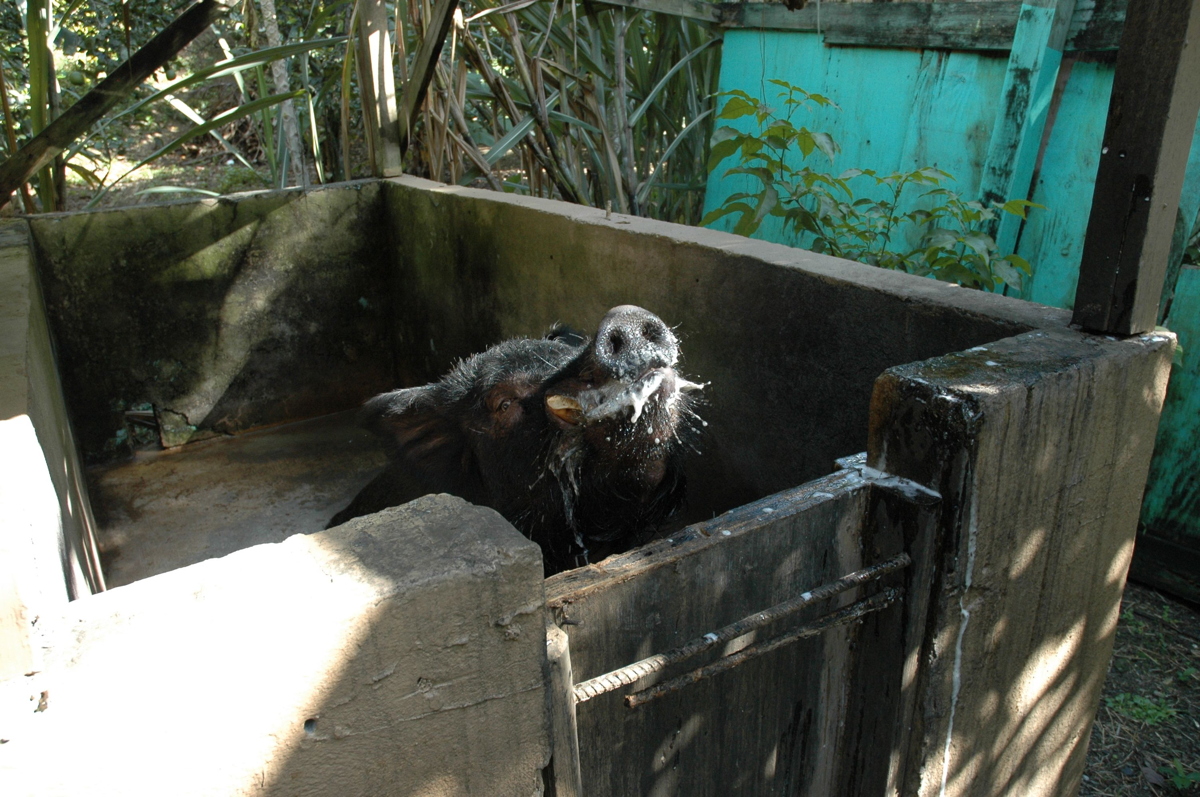 Sorry to be off topic a little Doc.

Not to worry. This whole thread is about a sub-category of numismatics, and the discussions have addressed all kinds of related issues. I just bring it back to the main theme on a daily basis.
rdw4potus

rdw4potus
Joined: Mar 11, 2010
OK, Doc, you win. If I were to plan a trip to the Atlantic/Caribbean islands, how could I get the most casinos per unit time? :-)
"So as the clock ticked and the day passed, opportunity met preparation, and luck happened." - Maurice Clarett
Doc

Doc
Joined: Feb 27, 2010
Chartered aircraft and a limo waiting at each airport.
rdw4potus

rdw4potus
Joined: Mar 11, 2010
Ha, well, I do have a ticket in tonight's lotto drawing. So the odds of that working out aren't exactly 0, but assuming that isn't an option is the next best plan a very long cruise?
"So as the clock ticked and the day passed, opportunity met preparation, and luck happened." - Maurice Clarett
Doc

... assuming that isn't an option is the next best plan a very long cruise?

The best plan, of course, depends on your objective(s). If you want to enjoy a nice vacation, you really should include cruises on your list of options.

However, if you want to collect a lot of chips in a minimum of time, a cruise is probably not the optimum strategy. Cruises typically spend daytime hours in port and sail port-to-port at night. In a lot of locations, the casinos aren't even open during the hours that you can be ashore.

If you want to see a lot of casinos in the Caribbean islands, averaging more than one or two a day, then my recommendation would be to fly to Aruba, hit all of the casinos over a couple of nights, then get a flight over to Curaçao for one night. It's probably cheaper to return to Aruba for the flight home. You might consider San Juan as another stop on that route. I have never followed that plan myself, but it's certainly plausible that you could get flights and hotels for similar or less cost than taking a cruise.

All three of those places have quite a few casinos, though many of them would not be available to you as a cruise ship passenger because of their operating hours, and all those hours/nights you would spend on the ship will only offer you one chip for your collection.

As I said, "best" depends on your objective.
RSS Feed