They have said that the conversion will be complete by this fall, but I have seen no mention of an anticipated changeover date for chips, other than NicksGamingStuff's speculation in this forum. The NGC Chip and Token Monthly Reports don't show any new chips approved for Fitzgerald's since some roulette chips last June and none approved ever for "D" or "TheD". Perhaps there will be something when the March report is released.

I am hoping there are new chips in time for WoVCon][.
Doc

My vote is for code. I can see where that'd be handy, especially on high-denomination chips.

The Bill's Gamblin' Hall chip also has a circle around the outside, between the top hats and canes and the perimeter of the chip. I may not have any other really newly issued top hat and cane chips to determine whether there has been a basic design change. The Gaming Partners International web site doesn't offer good images of their designs, probably for security reasons.
Ayecarumba

My vote is for code. I can see where that'd be handy, especially on high-denomination chips.

I suspect the "code" may vary by denomination as well as venue. It would be interesting to compare them to Buffalo Bill's $1,000 chips... but I think there are only two of them, so it is hard to get a picture.

If you have not had a chance to ride the "Desperado", I recommend that you do it before someone dies on it, and they shut it down. The steel coaster has been sitting out in the elements for many years now, with minimum maintenance. 120 degree heat in the summer, freezing cold in the winter, blowing sand all the time. The last time I rode it was about three years ago. Coming off the first hill, the car was vibrating so badly, I was afraid I was going to pop a kidney. Awesome.
Simplicity is the ultimate sophistication - Leonardo da Vinci
Doc

... I recommend that you do it before someone dies on it, and they shut it down.

Ah! Another probability problem. If you do choose to ride it, what is the probability that you turn out to be justification for shutting it down?
Nareed

I have often wondered whether there is some sort of code or whether the molds are just set up in some random fashion.

It seems too subtle and obtuse to be code. After all, codes on chips, currency, credit cards, etc are used, as codes, for reasons of economy or simplicity, not for secrecy. Typically codes are letters, numbers, colors or a combination of all three.
Donald Trump is a fucking criminal
DJTeddyBear

DJTeddyBear
Joined: Nov 2, 2009
The code (if it is one) does NOT narrow it down to individual chips. There are only 8 logos on each side. That translates to 16 bits, or 64K combinations - assuming you could identify which one was the first bit.

I assume that it's a production batch code, or something along those lines. After all, how often would a casino place an order for the same design?

The knee-jerk response to that is, casinos can, and DO, change the edge spots, but that requires gaming approval. Changing the cane is probably done without red tape.
Superstitions are silly, childish, irrational rituals, born out of fear of the unknown. But how much does it cost to knock on wood? 😁
Doc

They then say, "Check with your sales executive to find out which security features work best with your selected chip style." It seems clear that you can't find out exactly what the methods are unless you are a real customer.

DJTeddyBear
Joined: Nov 2, 2009
Over on Anthony Curtis' site, todays Question of the Day deals with chip security and design.

Non-members can only read the current QOD, so read it while you can!
Superstitions are silly, childish, irrational rituals, born out of fear of the unknown. But how much does it cost to knock on wood? 😁
Doc

Jay Sarno and business partners developed Caesars Palace using funds loaned from the Teamsters Union pension fund, and the casino opened in 1966. The name was intended to provide both a European flair and an air of opulence or royalty. The recurring question of whether there should be a possessive apostrophe in the name (as Caesar's) was answered in the negative by Sarno. He said that every one of his guests should feel like a Caesar; i.e., it was a palace to accommodate many Caesars, not one possessed by just one Caesar.

In 1967, Evel Knievel made his famously unsuccessful attempt to jump the front fountain on a motorcycle. I just learned that the section of that linked video that shows the crash was shot by actress Linda Evans while she was married to John Derek, pre-Bo. I also learned that when he finally came to rest from that attempt, Knievel was in the Dunes parking lot.

There were subsequent additional attempts to perform that stunt, resulting in all of the nasty injuries that any rational person would expect. In 1969, Sarno and friends were forced to sell the casino due to the accusations by the Federal Task Force that there were ties to organized crime.

Over the years, there were various owners that I haven't bothered to look up, then Harrah's Entertainment acquired Caesars Entertainment and the casino in 2005, subsequently changing the name of their own company to Caesars Entertainment. Caesars Palace is considered the jewel in the corporate crown, and there have been numerous additions to the property since the original construction.

I have never really learned my way around Caesars Palace, and I have gotten a bit lost there several times. I have never stayed in the hotel, but I have wandered the Forum Shops many times (spending as little as possible) and once attended a Bette Midler performance in the Coliseum. I find the robotic & projection shows in the Forum Shops to be both overdone and uninspiring, but I have never watched them through the eyes of an eight year old.

I do like the Atlantis Aquarium at the far end of the Forum Shops, in front of the Cheesecake Factory. It is more accessible than the aquarium behind the desk at Mirage but smaller than the one at Silverton. They have hand feedings of the fish by a scuba diver, with another host outside of the tank explaining their work with the fish, how hand feeding allows them to feed individual fish special diets, and such as that.

There is one facet of the aquarium that is not promoted heavily but which is both educational and fun. Mon – Fri at 3:15 P.M., they give a guided tour of the facilities beneath the aquarium, where the marine biologists care for the aquatic collection. There is a small sign on a wooden post near the aquarium that tells when and where to meet for the tour, and most guests in the area pay no attention at all. My wife and I have taken that tour twice and enjoyed it each time.

I have rarely gambled in Caesars Palace, mostly because it attempts to maintain a high-end atmosphere for gamblers while I am a cheapskate, low-roller flea. The first time I played craps there, I was astonished to find that they were using slot tokens instead of $1 chips. I have always considered that an indication of a low-class establishment, and it just didn't fit with the image that Caesars attempts to project. When I cashed in at the cage, I asked whether they ever used $1 clay chips. The cashier said that they had them in the poker room, and she had heard that they might put them back out on the main floor soon. I returned to Caesars Palace to play craps on a subsequent visit to Las Vegas and did acquire a clay chip that time.

The images below show both sides of the Caesars token and the clay chip. I know it is completely invisible in the first small image of the token below and difficult to see clearly in the medium image you get by clicking on the small one, but below the profile head and just below the center of the laurel wreath, there is a small mark. If you have a way to magnify that image on your screen, you may be able to see that the mark is actually three letters: "RWM".

That is the mark of Roger Williams Mint, formerly of Attleboro, MA. (Ha! Once again I am able to identify the source of a chip/token!) The company's web site indicates that they are now part of Tokens Direct, a manufacturer of tokens for car washes, batting cages, amusement arcades, and the like. With the rise of TITO, the business prospectus for manufacturers of casino tokens must be looking quite dim.

The image of the clay chip seems to have reasonably accurate color rendering, in contrast to many of my previous postings. The perimeter ring has molded images of Roman columns and the name of the casino, using what appears to be some form of early Latin alphabet characters. Undoubtedly we need pacomartin's input here, but I suspect any such set of characters was from well prior to Julius Caesar's time. I have not been able to find any single set of Roman/Latin characters that includes the "<"-shaped C and lightning-bolt S along with a modern A and an E that looks anything like that, although the Latin E apparently took on several forms. This whole topic of alphabet characters is well outside of my realm of knowledge, so I'll just leave it that this is the chip in my collection. And this chip with the casino name molded into it is much more in keeping with the preferred "image" of Caesars Palace than is the practice of using slot tokens at the tables. 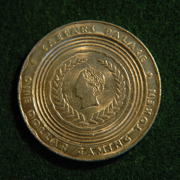 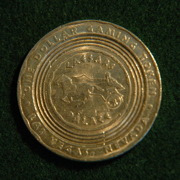 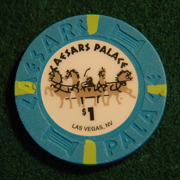 Edit 5/27/12: Check this post later in this thread about UV images visible on this and other chips.


Edit 6/7/12: DJTeddyBear posted his chip from Caesars, front & back as well as edge printing, in this post.
Nareed

Nareed
Joined: Nov 11, 2009
Those tokens are beautiful. They do look a little like ancient roman coins. I'd say it was a good call to put the picture of a Roman emperor and to make them gold in color. BTW when you started going on about letters, I half expected those would be AUC for ab urbe condita, "from the founding of the city," which is how Romans counted years.

About the aquarium, it's decorated with very convincing pieces of statuary, weapons and parts of buildings, as though it were a ruin swallowed by the sea. Very nice. But then I like the ancient Greek/Roman motif. I wouldn't mind a calendar on the property giving the date in terms of the Julian calendar withe the year as "2766 A.U.C." :)
Donald Trump is a fucking criminal
RSS Feed