teddys
Joined: Nov 14, 2009
I like Southland Park. I stopped there on the way down to Tunica, spent an hour or two there, and liked it so much I stopped again on the way back. Someone in their marketing/design department is very creative because their graphics/promo package is one of the best I've seen at any casino, let alone a locals' racino. It's some kind of late '50s/early '60s Jetsons-type thing with cartoon characters and silly catchphrases. You can see a bit of it on their website.

They have both the Interblock bubble craps and the SHFL Vegas Star e-craps. The Interblock game is $3 minimums, 3x4x5x odds, while the Vegas Star is $5 minimums, don't remember the odds. I played a little on the Interblock and won. I also played Ultimate Texas Hold 'Em on the i-Table with $5 minimums, and with a dealer who seemed intent on showing me her bottom hole card as clearly as possible. Unfortunately, I still got killed on the game. I liked how you could press the base bet up in $1 increments and still get the correct payouts. Almost no "live" game will let you do that.
"Dice, verily, are armed with goads and driving-hooks, deceiving and tormenting, causing grievous woe." -Rig Veda 10.34.4
Ayecarumba

West Memphis is a city/town in Arkansas, across the river from Memphis, TN. It's a bit like East Saint Louis, IL.

Edit#1: The "a bit like" refers to the naming, not the similarity of the towns.

Edit#2: Some might say that West Memphis is more commonly known as Saqqara, but that's off topic and perhaps a bit esoteric.

I ask because the airport in Cincinatti is actually in Kentucky, across the river from the city, but no one there thinks twice about it. It seems that everything in the region is located in, "Cincinatti"; not "Cincinatti, OH" nor "Cincinatti, KY".

I wonder if the folks in "West Memphis, AR" consider themselves distinct from the "Memphis, TN" crowd across the bridge?
Simplicity is the ultimate sophistication - Leonardo da Vinci
Doc

Today we begin a new state in this thread. It is my understanding that the legal gambling facilities in California, not counting the horse race tracks, can be categorized as either card rooms or tribal casinos. While I visited a few of the card rooms in 2003 before I started collecting chips, I have decided (at least for now) that I will not take my collection in that direction. That may not represent rational thinking, but that's the "decision."

Each of the 21 California chips in my collection is from a tribal casino, and to this point I have only made the rounds of the far southern end of the state – farther south than the tip of Nevada. I think the casino in Havasu Landing is the northernmost that I have visited.

The Agua Caliente casino in Rancho Mirage opened in 2001 and is owned and operated by the Agua Caliente Band of Cahuilla Indians. The tribe also owns and operates the Spa Resort Casino in Palm Springs, which opened on a limited scale a few years earlier, starting out in a tent next to their Spa Resort Hotel, but developing later into a pretty nice place a block away. The two casinos are located about eight miles apart and are neighbored by some rather highfalutin communities.

The tribe's ancestors have inhabited the Palm Springs area for centuries, benefiting from the natural hot springs there. According to the tribal web site, the Cahuilla name for the area was Sec-he, meaning "boiling water." The Spanish who arrived in the area converted this name to Agua Caliente, or "warm (hot?) water," and also applied that name to the local tribe. Eventually, the name "Palm Springs" evolved in English, representing both the native tree and the hot springs.

In addition to their casinos, the tribe has commercial operations that include two hotels, a golf resort, and what they refer to as "the premier concert theatre in Southern California, The Show." I have never been there, so I can't say whether that description is accurate or bloated.

In contrast to so many previous posts, this time the two images below do not show the two sides of the same chip. I visited the tribe's two casinos one day apart in 2007 to collect my souvenirs. They were using different chips in the two casinos, but each chip had the name of one casino on one side and the other casino on the other. I do not know for certain that the chips were interchangeable between casinos, but I suspect that they were. Most, but not all, of these two casinos' chips shown in the MOGH catalog have this dual-use design.

These two images below show the Agua Caliente side of the two chips that I have in my collection. The opposite sides present the Spa Resort Casino in matching designs, and I will be posting those images a little over two weeks from now. I do not remember which chip I obtained in which casino – the mixed labeling and the jumble of my travels that week led to the specifics being lost in the noise.

Both chips are from Chipco. The edges of both chips have alternating segments of blue and white, and the chip shown in the first image also has the "1" denomination – without a "$" – as a blue numeral in each of the two white fields on its edge. 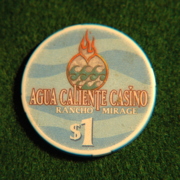 Ayecarumba
Joined: Nov 17, 2009
Thanks for this post Doc. The Agua Caliente is a very nice facility. They offer the odd "card craps" game since California fobids non-card based table games.

As much as I enjoy the tradition, weight, and texture, of the Paulson "clay" chips; I think the Chipco "ceramic" cheques are superior for their ability to handle detailed graphics and edge printing.


Edit: Here is my Agua Caliente $1. Not as nice as Docs. I do note that California's Native American Casinos seem to change designs every few years. I wonder if they are trying to stay ahead of counterfiters?

Doc
Joined: Feb 27, 2010
I have played several variants of card craps in California tribal casinos, and I cannot remember which version is played in which casino. The one I liked best (in whichever casino that was), had a rotating player as the shooter, rolling two standard dice. To that extent, the game was just like standard craps. The difference was that the box man had a six-card deck, A-6 (spades, I think), that he shuffled and dealt into six boxes marked 1 through six. He did that before each shooter's first come-out roll.

On each dice roll, the two dice were read, and the box man slid the cards in those two boxes (or one box in the case of a hard way) forward. Those two cards (single card) indicated the "roll" that was to be paid. If the shuffled cards came out in order, then for that shooter the game was exactly like standard craps, otherwise it was just as if the faces on the dice had been rearranged or renumbered.

I liked that version much better than the others. Both of the others that I remember involved the box man shuffling and dealing cards each time to indicate the roll. In one case, there were two decks, red and green, with cards that looked like dominoes -- two sets of pips on each card, but no blanks. After shuffling, the box man dealt one card from each deck face down. A player rolled two non-standard dice, one red and one green. Whichever die showed the higher number indicated which card the box man was to turn over and reveal the "roll" to be paid. The non-standard dice did not have the same numbers on them, so there was no way to have a tie, but there was 50-50 chance of the red or green being higher.

The other version I remember had no involvement from the players in determining the roll. The box man just shuffled and dealt cards that determined the "roll."

One of these last two versions has been discussed (maybe at WoO?) as possibly being countable with a potential advantage arising for the don't pass bet. I can't remember what the policy was on penetration and shuffling or which version was possibly countable.

Is there someone here familiar enough with the California tribal casinos to provide a rundown of which kind of card craps is played in which casinos?

BTW, I just received communication from the usually-prolific-but-not-at-the-moment resource of the Spanish Word of the Day thread, telling me that Agua Caliente means "hot" water in Spanish and that there would be disagreement among Spanish speakers about the proper way to say "warm" water or "warm" anything else. I had originally posted "warm (hot?) water" because the tribal web site translates it as "warm water," while I thought it should be "hot water." Note: that is not a claim that I know Spanish.
Ayecarumba

Ayecarumba
Joined: Nov 17, 2009
Agua Caliente had the "two cards each numbered 1-6" version the last time I was there. I didn't play, but it was odd seeing a few players standing around the craps table with stickperson, and no dice. Didn't look like fun at all.
Simplicity is the ultimate sophistication - Leonardo da Vinci
bigfoot66

bigfoot66
Joined: Feb 5, 2010
At Agua Caliente (and most of the Palm Springs joints) they have 1-6 from two different colored decks. They put the packet of 12 cards through the shuffler. The top card is one die, and then the top card from the other colored deck is the second die. The "red and green nonstandard dice" method is employed only by Pala, as far as I know. Sycuan uses the "two dice, one set of cards on numbered boxes 1-6" method. Harrah's has the best method IMO. A red and a green die, both standard. two card shufflers shuffle packets of 7 cards each. The stick has red 1-6 boxes and green 1-6 boxes and puts the newly shuffled cards on the boxes every hand. A roll of Red 5 Green 6 would mean they flip the card on the red 5 box and the green 6 box (and with my luck it would be a 7 out).
Vote for Nobody 2020!
Doc

Doc
Joined: Feb 27, 2010
Thanks for the rundown, bigfoot66. I assume that's Harrah's Rincon? I was there one evening in 2009, but I don't remember that version of craps. It sounds like a fine way to do it, but I'm not clear on how it's better than what they do at Sycuan. What do you see as the benefits to using two decks and different colored dice? To make sure I don't misinterpret the "every hand" shuffle, do you mean they shuffle once after each 7-out or once before each come-out roll?
TIMSPEED

TIMSPEED
Joined: Aug 11, 2010
Fwiw,
The best California dice is at Barona, just like regular dice, but with the boxman pushing forward the corresponding card.
Gambling calls to me...like this ~> http://www.youtube.com/watch?v=4Nap37mNSmQ
Doc

Fwiw,
The best California dice is at Barona, just like regular dice, but with the boxman pushing forward the corresponding card.

Well, Tim, that sounds like both the version that I described and that bigfoot66 says is at Sycuan and the version bigfoot66 described as being at Harrah's. How are these different, at least in terms of being "just like regular dice"?

And BTW, how do the various card craps games compare in terms of buy bet vig, field payout on the 12, and free odds limits? I can't remember that stuff at all.
RSS Feed