Kirk Kirkorian, whose casino interests are typically associated with MGM these days, opened the world's largest hotel in Las Vegas in 1969, calling it the International Hotel. It was sold to Hilton in 1970 and renamed the Las Vegas Hilton in 1971. It was also featured in a 1971 film (Title anyone?) as the Whyte House.

That film would be "Diamonds Are Forever" starring Sean Connery as James Bond. Loved the car chase in downtown as well as the scene in the newly opened Circus Circus.
rdw4potus

Maybe the Hilton was doing something special for the world cup.

They do have that giant sportsbook...:-)

I'm frustrated by my collection and/or photobucket at this point. This chip image is titled "las vegas hilton reverse," which is my terminology for when there's also a picture of the front of the chip. I'll be damned if I can find it, but yes, Doc's right that it shows a soccer player.
"So as the clock ticked and the day passed, opportunity met preparation, and luck happened." - Maurice Clarett
DJTeddyBear

DJTeddyBear
Joined: Nov 2, 2009
As you may recall, I had posted my $5 Hooters chip on the correct day. However, I discovered that my $1 chip is different than Doc's. So, as I continue to catch up, here's my $1 Hooters chip:

My chip as the same image on the front and back, and has a visible Paulson logo. 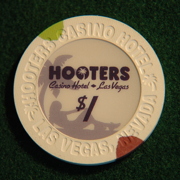 Just in trying to post this thread in an organized fashion, I have respect for the difficulty in presenting something like the MOGH catalog in any way at all. I think I like the sequence by denomination, but having them in date order within denomination would perhaps be better, and I understand that for some people a strict chronological sequence would be better.

I suspect most folks don't know the date of issue, so it is not a good initial index value. Other characteristics (casino, denomination, manufacturer) help to readily identify a chip, especially since the date of issue isn't incorporated into the chip itself, (and is not reliably sourced). However, I agree that it would be nice to be able to sort the images by date of issue in order to see the evolution and change over time.
Simplicity is the ultimate sophistication - Leonardo da Vinci
Ayecarumba

The LV Hilton also hosted the Star Trek Experience for a decade and had an adjoining Quark's Bar, where we dined several times. Fun, if a bit over the top.

One of my distinct Vegas memories is the time I dragged Mrs. carumba out to Las Vegas to attend the grand opening of the Star Trek Experience. She enjoys "The Next Generation" much more than me, and I am particular to the original series much more than her. Unfortunately, interest in the event was high, and so were the room prices at the Hilton. We ended up at the Stardust. The opening day tickets for the, "Experience" went quickly, and the earliest "entry" time I was able to get was 2:30 in the morning. I figured we would get there early in the evening, check out the festivities, and maybe see some stars. However, my wife was tired after the drive, and wanted to take a short nap, which turned into several hours of sleep. Meanwhile, I was stewing at the Stardust casino debating whether or not to leave her behind. I finally woke her at 11, and by the time I dragged her over there, it was after midnight. The place was still packed, and some celebrities were sighted (James Doohan, "Mr. Scott", playing high limit slots; Chase Masterson (Leeta, the Dabo girl from DS9), but the opening ceremony was way over, and even I was feeling exhausted with another hour and a half to go until our entry time. We ended up drifting around the casino, but the time passed very slowly.

The table games were not open yet, but they did have slots that were using dedicated tokens:

When we finally were able to get on line, there was so much to see along the path leading up to the actual ride, that I took over an hour to look at everything. Mrs. carumba was officially dying. The attraction itself was great, but by the time we got out of there, it was light outside. We were both out of it for the next two days. Mrs. carumba and I still talk about that trip. It is funny how our memories of the events differ.

It is too bad they weren't able to relocate it after the close a few years ago. Downtown's Neonopolis was rumoured as a possibility, but like everything good associated with that place, it fell through.
Simplicity is the ultimate sophistication - Leonardo da Vinci
Doc

I'm frustrated by my collection and/or photobucket at this point. This chip image is titled "las vegas hilton reverse," which is my terminology for when there's also a picture of the front of the chip. I'll be damned if I can find it, but yes, Doc's right that it shows a soccer player.

I know that I can't look at the full directory of your chip images, but can't you? Are they not in alphabetical order? How can the image be hiding from you in an alphabetical list? Must be something I don't understand about photobucket. Could the image have slipped into a different directory?
rdw4potus

I know that I can't look at the full directory of your chip images, but can't you? Are they not in alphabetical order? How can the image be hiding from you in an alphabetical list? Must be something I don't understand about photobucket. Could the image have slipped into a different directory?

I can see a list with thumbnails. It's 23 pages long, and there's no short-cut to the middle (we're on page 11 right now). Oddly, it's reverse-alphabetical. I think there was a problem when I copied my most recent photos. I copied over an entire folder of images, including many that were 2-per-chip. It looks like Photobucket only has 1 image per chip in the list. I have a few more pictures to take now, so once the new pictures are taken I'll try to move over the other missing pics and the new ones.
"So as the clock ticked and the day passed, opportunity met preparation, and luck happened." - Maurice Clarett
Doc

If anyone sees new chips in use at The D, please let me know. (I'm looking at you, NicksGamingStuff, but I'll accept news from anyone who has it.)


Edit: There were also tokens approved for the Mirage. Are these just for token collectors? The Mirage tokens are brass clad and show Terry Fator puppets. The ones for The D just show their logo, but then there weren't any old ones.
Nareed

The D has a lot of old slot and VP machines in a large room upstairs from the casino, along with the sports book.. They all have bill acceptors, I think, but they also take coins. Well, at least the old, old DW video poker machine I played did (I actually dropped a few nickels into it). I also saw a few pay off in coins. It could be they want to bring back tokens as well, as these machines don't print cash-out vouchers. There are even large plastic cups available.
Donald Trump is a fucking criminal
Doc

I posted yesterday that the owner of the hotel-casino since 2004 has been Colony Resorts LVH Acquisitions, with four corporations sharing ownership of that entity. (I checked again, and it's really three corporations plus an individual who owns 1% of it.) I think that name was created in 2004 with the idea that "LVH" was a convenient shortening of "Las Vegas Hilton". Once the right to use the Hilton name was lost, they started referring to the place as simply LVH, and I suppose it's nice to have a name that goes along with the abbreviation. Voila! – Las Vegas Hotel.

The new chip is a blue Paulson hat and cane design with three wide edge inserts in different colors. One side of the chip (first image) has the Short Cane Version of the logo and the other has the Long Cane version. Until starting this thread, I had never noticed that feature, and now we have seen several chips that are like that. The center inlay has a photo of the hotel from a different perspective than the one that was on yesterday's Bud Jones chip. Rather than a view from the west (out on one side or the other of Paradise Road), this one shows an image from the south, with the pool in the foreground.

Not that it is important, but I thought I would note that the Y-configuration of the hotel has wings of three greatly different lengths. It is easy to miss this when looking at a photo (such as on either the LV Hilton or LV Hotel chip), since it is disguised by the viewing perspective. Check the aerial view on Google Maps. In contrast, the basic Y-shapes of Mirage, Treasure Island, Monte Carlo, Venetian, and Rio have much more uniform lengths to their wings, and even the Bellagio has three almost equal wings if you consider the main curve of the tower as two wings.

There is no hidden image on this chip that I can see revealed by UV light, but the blue clay fluoresces all over, and the edge inserts change color: the yellow and orange ones turn brown, while the brown one turns black. 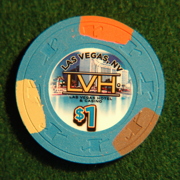