Do casinos check bills for counterfeits?

zippyboy
zippyboy
Joined: Jan 19, 2011
Chances are that Xerox is on a network. If it's got an ethernet cable, then it's accessible from anywhere in the world. Certainly if you're at a service bureau the machine is on their LAN so employees can print your file to it, and Xerox techs can run diagnostics remotely. And if the machine is big enough, then architects can print their drawings and plans to it through a simple browser from their offices miles away.

If you're using a 20-year old b&w machine at your local library only plugged into the wall outlet, maybe it'll let you copy a simple bar code and you can get away with it. However, there will still be a hard drive in there keeping copies of all you do, so you people who get copies of your tax returns before sending them off, beware. Dishonest service personnel will see your info.
"Poker sure is an easy game to beat if you have the roll to keep rebuying."
Nareed

Nareed
Joined: Nov 11, 2009
I've tried scanning bills in order to make images that I can explore digitally. You can find details a lot better when you can change colors, contrast, etc. The scanner refuses to scan bills. A notice appears on the computer saying scanning bank notes is illegal, ro something like that.

At the big commercial copy places, they won't scan or copy bills at all.

I should try scanning notes from my collection. I've some old ones, foreign ones, and some that dont' even look like bills at all.
Donald Trump is a fucking criminal
FarFromVegas

ummmm, I doubt this. Not these days. Any scanner sold in the last 8 years would detect a bill and intentionally blur the microprinting, even at 2400dpi. And every Xerox machine for the last decade at least keeps a record of EVERY single thing copied on the glass and sends a signal to homebase if anything not legit is copied, like store coupons, passports, cash, plane tickets, etc. Some models will print it, but only at lo-rez, or print "void" on it in faded text, or simply won't print it at 100% (125% is allowable, as is below 75%). These machine attributes aren't advertised, but I worked in commercial printing for 20 years, and heard hilarious stories from the Xerox guys about the fools who thought they could breach the system.

My son was doing a report on Andrew Jackson and he put a 20 in the scanner to print a picture for the report. After that, everything that was printed had a line running lengthwise down it. This was an HP.
Each of us is entitled to his own opinion, but not to his own facts. Preparing for a fight about your bad decision is not as smart as making a good decision.
PaulEWog

ummmm, I doubt this. Not these days. Any scanner sold in the last 8 years would detect a bill and intentionally blur the microprinting, even at 2400dpi. And every Xerox machine for the last decade at least keeps a record of EVERY single thing copied on the glass and sends a signal to homebase if anything not legit is copied, like store coupons, passports, cash, plane tickets, etc. Some models will print it, but only at lo-rez, or print "void" on it in faded text, or simply won't print it at 100% (125% is allowable, as is below 75%). These machine attributes aren't advertised, but I worked in commercial printing for 20 years, and heard hilarious stories from the Xerox guys about the fools who thought they could breach the system.

People should also be aware of the fact that at least some printers put a unique code on every document they print which appears to identify the printer.

EFF: Is Your Printer Spying On You?

So remember, if you are trying to blackmail someone the best thing to do is ask the borrow the printer of the guy down the block that everybody hates.
woodytyme

I have some experience detecting fake bills, and i can't think of any method that approaches looking at the back under normal light. Under UV light, you'll see either a fluorescent safety strip or fluorescent ink. The latter is used only on the back, but it's not visible under normal conditions. Against a backlight you can check for water marks, but 1) that works as well in the front and 2) there's no backlight at the casino table.

As someone else suggested, though, counterfeiting isn't that big a problem. I know people who handle large amoutns of cash, both pesos and dolalrs, and they detect only a handful of fake bills per year.

It wouldn't surprise me to find out that the casino do have UV lights over the tables to spot fakes. And if you do use fake bills, it will be on camera!
I am going to win the World Series of Poker!! (someday)
AZDuffman

The problem with the gold pen method it only checks for authenticity of the paper. Another friend of mine that owned a franchise of B&Rs received a $100 bill that was really a $5 bill that was washed and reprinted. He has it still to this day.

Tell him he needs to be careful, it is a felony to have conterfeit bills in your posession except for a short term after you accepted them and the Secret Service picks them up. It should be tax deductible, however.
All animals are equal, but some are more equal than others
Nareed

It wouldn't surprise me to find out that the casino do have UV lights over the tables to spot fakes.

I would. UV lights cause sunburn. Granted in Vegas you ahve to mind your exposure to the sun, but you'd know it if you were gettign sunburned at a casino.

Ok, the so-called "black light" used as a UV source in counterfeit detection lamps is too feeble and confined to do much, but limiting exposure to it is recommended anyway. Given how tall the ceilings are in most casinos, they'd need very powerful UV lights, which would cause all kinds of trouble.
Donald Trump is a fucking criminal
HKrandom

WASHOO2
Joined: Sep 11, 2010
I always request $ 20 bills at the cashiers window. I never accrept any hundred Dollar or fifty Dollar bills. My buy in at the table is always in 20`s . 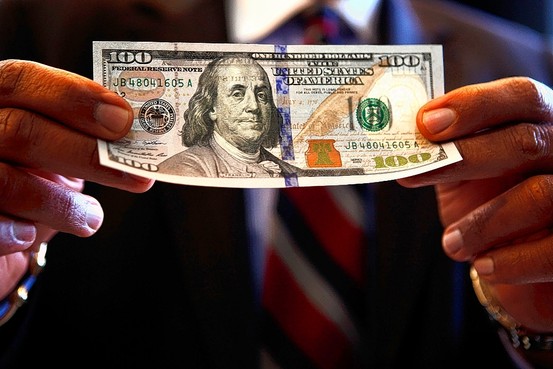 In Feb & March of 2010 the treasury printed about 300 shipping palettes of their newest $100 banknote. A palette is 640,000 bills shrinkwrapped onto a standard shipping palette that you can move with a forklift. The banknotes alone weigh 1400 lbs.

Satisfied with their trial production run, in April of 2010 the treasury launched a media campaign extolling the benefits of the new bill. It has a 3-D security strip, a color changing inkwell, and a host of other devices to foil counterfeits. A promise was made to launch in February of 2011.

By the end of Sep 2010 a small press release came out and said that the Treasury was having production problems and they would have to delay the release date from Feb 2011 to an unknown later date. Finally in the first week of December 2010 a much longer story was issued that said the production problems were very severe, the design had a terrible problem, that they would begin printing more of the 2006 version to keep up interim demand, and it was no one's fault.

What's more, they have already printed well over $110 billion dollars of notes, that some people claim are worthless. They have a problem where the ink separates on some of the notes leaving little white crease lines. Production cost was about 12 cents per note, more than double the old notes.

On a scale of national problems how serious is this issue? After all we can just keep printing the old notes. My guess is that it will be considered an imperceptible problem domestically. However, distribution of counterfeit notes is a big problem overseas. If this issue knocks back a new series for many years, the international users may start increasingly turning to the Euro to store their money. Fear of counterfeits can be a thousand times worse than actual counterfeits. This note was supposed to offer everyone in the world quick check and easy checks for forgeries.

At a time when the dollar is under increasing attack as the basis for the world's financial system, this problem came at a bad time. They have over 1800 shipping palettes of these $100 banknotes that were printed by September. I suppose the difficult question is how they printed so many notes before they realized that they were defective.
RSS Feed