Senate gave up and went home for Christmas. Unless House passes Senate Wall-free bill (and Trump signs it), govt will remain shut down until at least Thurs when the Senate returns.

Trump would rather screw over 300-400k employees for their EOY paychecks and likely their Christmas funds, than restore the govt. What a putz. Especially after he had agreed to the Senate bill before they went ahead to vote on it, then reneged. And after he canceled their raises. And their COLA increases, both budgeted for next year.

As to the wars, I won't pretend to be a military strategist. But I look at Mattis as the best we have. And he resigned over it.

So no, we should not be doing it. We leave our allies in the ditch, the people we were helping unprotected, and the many billions we spent wasted, if we don't finish the job and withdraw in a manner that does not allow ISIS to regroup and prevail.

Not to mention all the Americans killed and wounded. Them most of all, IMO. This is a dishonorable non-resolution that betrays their sacrifice. But I consider that more of a personal bias, since so many here care more about money than honor or integrity of the government.

As often happens, Trump has a good idea, to get us out of the s....... countries that scorn civilization, but he can’t figure out an adult way to do so. Letting our allies know, behind closed doors, that we will be leaving, so they can either join us or do what they want.
Border protection is an admirable goal, but not to the detriment of the rest of the country.

Please SOMEONE offer me a bet on the 2020 Presidential election. I want ABT. (Anyone but Trump)
SOOPOO

If I remember the joke correctly...

How do Jewish people celebrate Christmas?

A nice Jewish boy with Blond hair and Blue eyes

Hmmm, wait a minute, this requires some thinking
For Whom the bus tolls; The bus tolls for thee
Face
Administrator

Hmmm, wait a minute, this requires some thinking

How dare you. This is politics. We don't do that here.
The opinions of this moderator are for entertainment purposes only.
darkoz

How dare you. This is politics. We don't do that here.

Sorry Face. You are right

Its just the President DON is tying me up in KNOTTS
For Whom the bus tolls; The bus tolls for thee
aceofspades 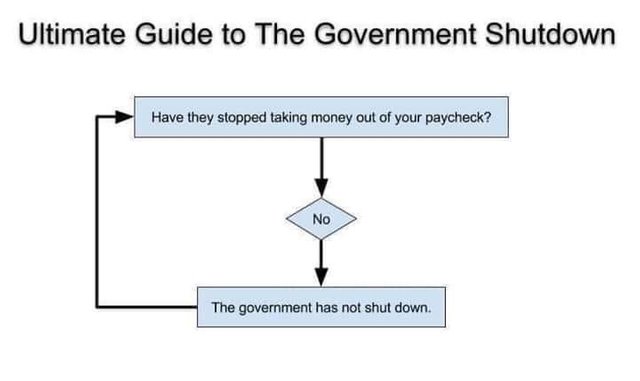 They need to not back pay people when it is over. Probably going to back pay $20B in wages for no services rendered to argue about $5B. I think we just gave $10B to South America. People need to wake up and start figuring out that government is not working for their best interests.
rxwine

rxwine
Joined: Feb 28, 2010
Even though Trump said he already owns responsibility for the shutdown, congress already passed a bipartisan budget bill he rejected. Hard to imagine he can own it anymore than he already does short of getting a tattoo about owning it.
Quasimodo? Does that name ring a bell?
MaxPen

MaxPen
Joined: Feb 4, 2015
People also need to look at the positive aspects to these shutdowns.

Fire up the stills while the revenuers are on vacation. So you’re saying terrorists are coming from the Middle East? Well then I’m sure you would agree with Trump’s travel ban restricting entry of people from those countries.
RSS Feed