Casino Club Card of the Day

s2dbaker
Joined: Jun 10, 2010
Thanks Doc, I'll see what happens as it goes along. I don't have any order in mind. I would like a story with the card image and it should be a card that is in the possession of the poster. A directory would be nice, I'll see what you've done with Chip of the Day and try to duplicate that. If there is more than one card design for a casino, I think they all should be posted as long as the board member is in possession of the card. I'd also like to see cards from casinos that no longer exist. I have a Bill's card that I think I'll post next.
Someday, joor goin' to see the name of Googie Gomez in lights and joor goin' to say to joorself, "Was that her?" and then joor goin' to answer to joorself, "That was her!" But you know somethin' mister? I was always her yuss nobody knows it! - Googie Gomez
Nareed

Just to follow up, I found the original temporary card that was issued to me. Yes, they used a Sharpie.

In my first trip to vegas I took a tour to Hoover Dam. The tour ended with lunch at the Sams Town buffet (not particularly notable). We were all given a player's card and a simple form to fill out. Only the cards ahd no names on them, naturally.

By my third trip Boyd had changed its club cards, so I wondered if I should update mine. I asked at the Fremont player's club desk and was told it wasn't necessary. Only the lady three was astonished at seeing a card with no name on it, so she decided to give me a new one. Alas, I didn't keep the old one.

I think I got the sparkles a little better in this shot.

You sure did.
Donald Trump is a fucking criminal
JB
Administrator

JB
Joined: Oct 14, 2009
This is nothing terribly special, but here is a Platinum card from MGM/Mirage. During my Vegas visit last year I stayed at the Bellagio on the nights before the G2E. I hadn't played at an MGM casino for 2.5 or 3.5 years. When I went to the player club to obtain a new player card, for some reason they printed it on a Platinum card. I think the reason why is because they show my status as being Pearl, and the Pearl and Platinum cards are similar in color.

The front is sparkly, but the sparkles only show up as dots when being scanned. 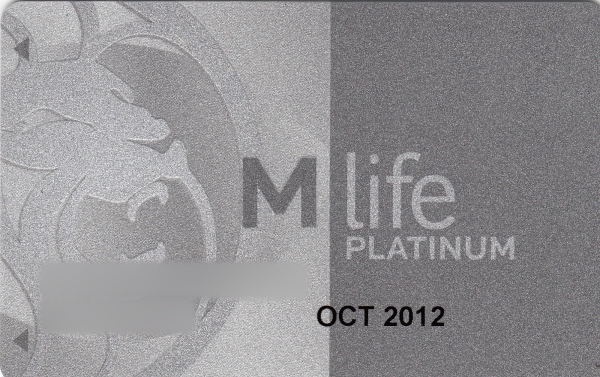 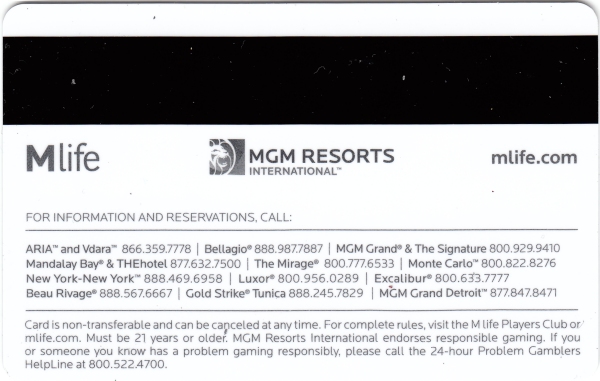 
This is not a story of beginnings but rather endings. Bill's Gambling Hall and Saloon was located on a little stripe of a lot just south of the Flamingo on the very busy corner of Las Vegas Blvd. and Flamingo Road. Bill's was previously named The Barbary Coast and was a "Coast" casino. Back then, Coast had recently been taken over by Boyd Gaming. Boyd had recently finished the Borgata project in Atlantic City and wanted to do something big in Las Vegas on the Strip. Harrah's swapped some vacant land by the Stardust for The Barbary Coast which gave Boyd a huge contiguous lot on which to build the Echelon project and Harrah's ownership of nearly everything on the East side of the Strip, from Harrah's Casino on south to Paris (The Aladdin/Planet Hollywood would be added to the Harrah's/Caesars empire later). Harrah's renamed The Barbary Coast to Bill's Gambling Hall and for some reason still unknown to me, did not integrate the player's club for the property into the "Total Rewards" program. Your points that you collected at Bill's Gambling Hall went somewhere but I never figured out where.

Bill's was closed on February 4, 2013 for a remodeling. I was staying at The Flamingo that weekend. I knew about the closing and remodeling in the back of my head. I had read about it and perhaps even mentioned it here but once I got to Las Vegas for that weekend, I was concentrating on a lot of other things and forgot about the pending demise of Bills. On the morning of the Super Bowl, I went to make some bets at the sports book in the Flamingo and the line was very long. I was due to eat breakfast with the family so I didn't want to wait on that line. I had an idea. I went to Bill's. I didn't have my player's club card with me, so I went to the desk where they issue them and noticed the signs saying that Bill's would be closing forever the next day. I asked, if I didn't get a chance to cash any winning tickets in before they close, what would happen. They told me that all winning tickets would be honored at any Caesars/Total Rewards property. The sports book at Bill's was nearly empty so after I obtained the card pictured above, I made my bets and went on my way. I cashed in my winners at the Flamingo the next morning, even before Bill's had closed their doors.
Someday, joor goin' to see the name of Googie Gomez in lights and joor goin' to say to joorself, "Was that her?" and then joor goin' to answer to joorself, "That was her!" But you know somethin' mister? I was always her yuss nobody knows it! - Googie Gomez
teddys

teddys
Joined: Nov 14, 2009
Bill's Player's Club, while sucky in and of itself, did do a "Comp Explosion" giveaway everyday for $100 in comp dollars. One time I won, and I didn't know about it until I visited their players club for another promo months later. So I was happy to hear that. It was easy to convert the Bill's comp dollars to Caesars' comp dollars.
"Dice, verily, are armed with goads and driving-hooks, deceiving and tormenting, causing grievous woe." -Rig Veda 10.34.4
s2dbaker

Bill's Player's Club, while sucky in and of itself, did do a "Comp Explosion" giveaway everyday for $100 in comp dollars. One time I won, and I didn't know about it until I visited their players club for another promo months later. So I was happy to hear that. It was easy to convert the Bill's comp dollars to Caesars' comp dollars.

I discovered another design for the Bill's card in another stack of club cards I have in my suitcase:

FleaStiff
Joined: Oct 19, 2009
Sorry Doc, I couldn't post an image to save my life. Indeed, I don't even have a digital camera since my phone is old cheapie throwaway.

I do like to carry ALL my cards with me though. When my local Indian Casino had a party of "newcomers" I went and got sloshed having won hands down the respect of my table mates who only had one card.

On the old Gambino Boat (Yeah, that is who used to own it) out of Palm Beach I'd perch my ringful of cards on the rail at the five dollar craps table to reserve my space while I was off feeding my face at the free buffet awaiting our arrival in International Waters. Once, for some reason, I left that wad of cards with the dull orange of The Venetian facing outward and darned if some sharp-eyed passing crew member didn't pick it up and show it to his boss. I then heard something about "they print it right on the card, maybe we should do that too". The name on my Grazie card is FIRSTNAME FLEASTIFF SURNAME. He spotted the bold black capital letters spelling out my rather unusual middle name and thought it had been a comment added by the casino rather than a whimsical request by me.
Doc

Sorry Doc, I couldn't post an image to save my life.

For those who haven't been paying attention, this is not my thread idea! All the credit (blame?) belongs to s2dbaker, who is the collector of club cards. I started that other thread about casino chips, and I just made one post here (before this one) offering some suggestions on how he might want to organize such a thread if he anticipates having it go on for an extended period.
Boz

Boz
Joined: Sep 22, 2011
The good news is when Bills reopens as the Gandeloffdorftenmunder (or whatever), they will be part of TR.
skrbornevrymin

skrbornevrymin
Joined: Jun 24, 2011
Just wondering why they would ever request the return of their card. Does anyone have any ideas, or is this just useless lawyerspeak? (See pics of Dotty's card backside)
RSS Feed