Ayecarumba
Joined: Nov 17, 2009
Binion's offers a free photo op with what they claim is one-million dollars under a pyramid shaped plexiglass display: 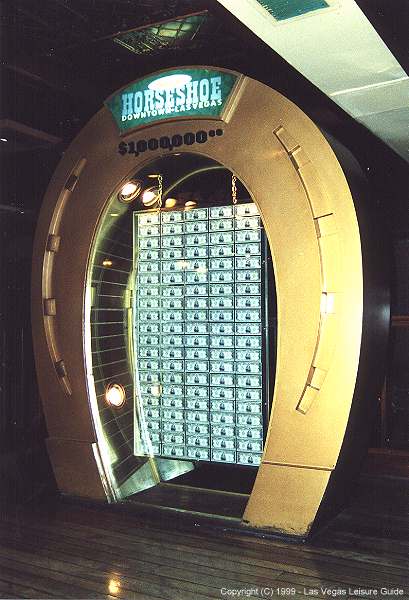 Given the utility of the money that drove the owners to take down the original Million, I am suspicious that the display really contains $1 million in USD. What do you think is in the middle, sandwiched between the hundreds in the front and back?
Simplicity is the ultimate sophistication - Leonardo da Vinci
7outlineaway

FleaStiff
Joined: Oct 19, 2009
I believe its known as a Michigan bankroll. High denomination bills on the outside for their "flash" value and dollar bills on the inside. However, I see no reason for them to do this. The cost is the same. The insurance premiums are the same. The risk is the same. Why not have an honest amount of money there. They use that sum as part of their calculated reserves since it is indeed cash on hand. They probably pledge that money in overnight loans to other casinos from time to time. It doesn't cost them anything to display the full and correct amount.
waltomeal

Given the utility of the money that drove the owners to take down the original Million, I am suspicious that the display really contains $1 million in USD.

People regularly sell $1000 bills for $2000 or more on e-bay. There is a $10,000 banknotes on sale now for $89,000 (no takers), but they are worth several times their face value. So the original display was worth far more than $1 million. Jay Parrino, who bought the display would only say that he paid less than $10 million.

So the whole display with acrylic container is over 200 pounds (174 pounds in banknotes), making it difficult to run away with, but still easily handled to put it into storage.

The loss of roughly $1000/week in interest is reasonably paid back in customer interest in the display.

Note: If as a cost cutting measure all of the internal banknotes were replaced with $1 bills, it would still be $83,060 in cash. But I don't think they would stuff it with newspaper as that wouldn't look correct.
Wizard
Administrator

Pretty good guess for eyeball. Using the numbers published in the paper that would be 40 visible banknotes and 79,600 hidden bills with an average value of $12.60 .

Assuming that they put only the $1 bills on the bottom, that would be six rows of 7000 banknotes. Assuming 100 banknotes in 1/2" that is 35" which looks about correct.

My guess is levels 2,3 and 4 are all stuffed with $20 banknotes in between.
DJTeddyBear

They use that sum as part of their calculated reserves since it is indeed cash on hand.

Good point. So it's all real, just not all Benjamins.
Superstitions are silly, childish, irrational rituals, born out of fear of the unknown. But how much does it cost to knock on wood? 😁 Note that the same could be said for Religion. I.E. Religion is nothing more than organized superstition. 🤗
pacomartin

Good point. So it's all real, just not all Benjamins.

Benjamins would be about 50" stack weighing 22 pounds. Assuming a briefcase could fit two rows, you could fit $1 million in a standard briefcase.

This display is 400" of banknotes.
RSS Feed