One interesting/fun aspect I wanted to mention was that, unlike regular VP where you usually start by looking for pairs first and then scan around for other possibilities, for the T&P series of games I find myself always looking for straights and flushes first. Pairs are almost an afterthought. I think the freshness of this way of thinking is (at least) one of the reasons we play testers are finding the games so enjoyable.
Have you tried 22 tonight? I said 22.
RealizeGaming

Nice game especially when this happens!

Great looking hand for sure! I'm still waiting to see two royals in one game!! 😁
gordonm888

I just played 200 rounds of the 3x5 Trade N Place demo game as it exists on 3-21-2020 and recorded results. I would claim that I am very skilled player.

Hands that paid off > 200 units must have at least one 4oak, straight flush or royal flush.
*****************************
Comments:
1. Obviously, 200 trials is not very many. In particular, the results are affected by how many big hands you make.
2. I think the mathematical value of Trade + Place return is likely higher than 40 units, and the mathematical value for the Place 3 return is likely lower. than 29 units.
3. I actually believe this is an interesting way to get a feel for the value of the return or EV or HE of a very complex game. If I made an occasional strategy error, well that probably reflects errors that a real player might make. And its a quick way to get a ballpark range for return/EV without writing (and debugging) code.

I will report on more "trials" in the next few days.
So many better men, a few of them friends, were dead. And a thousand thousand slimy things lived on, and so did I.
gordonm888


We haven’t started on the math analysis for this game since we’re focusing on the 3x3 version.

Our approach is to write a script that determines the best moves given specific cards on the table. We’ll test this script in the game by asking for player’s review and perhaps with an option to select a specific dealt set of cards to analyze tricky situations. Once we’re happy with the performance of the auto-play mode, we’ll take the script and run it outside the game in a terminal with no user interface. It should be able to play a billion rounds of the game in about 24 hours. We’ll only run a billion rounds once we see that it’s giving us a good RTP in shorter 5 to 20 min. simulations.

1) Evaluate the 3 hands before the trade. Rank them form best to worst. Save that result for later to see if it’s better or worse after a potential trade move. Perhaps “No trade” is the best move. When ranking the hands, it might be necessary to apply the classic poker strategy and see which cards make sense to hold. Although there is no “hold” option in this game, that strategy can be used to give better rankings to the 3 hands.

3) Compare the possible trade moves with the original 3 hands and find the best move.

When making a swap move, the best move seems to depend on if it’s the last swap, or there are 1 or 2 more swaps to go.

For the last swap of the round, it’s a basic check of all 15 moves to see which one pays out the most.

For the first or second last swap, it would require further ranking of the hands before and after the swap to find the best 3 hands.

It’s a lengthy process to get the final script working, and we haven’t even started on the 5x3 version. It’s amazing how fast the computer can play the game, and even if it takes 3 days to simulate a billion rounds, it’s not a problem to us.

Interesting. Developing rule-based protocols for how player should play the hands will be a challenge. Good luck.
So many better men, a few of them friends, were dead. And a thousand thousand slimy things lived on, and so did I.
gordonm888

I have now played another 200 hands (total of 400 hands) of the 3x5 Trade N Place DDB demo game and recorded results.

I have now played another 200 hands (total of 400 hands) of the 3x5 Trade N Place DDB demo game and recorded results.

Thanks gordonm888. I like hearing the game results others are experiencing and really appreciate you taking the time to share your outcomes with us.
RealizeGaming

RealizeGaming
Joined: Aug 1, 2013
Here is a pretty rare hand of two four of a kinds in one game. 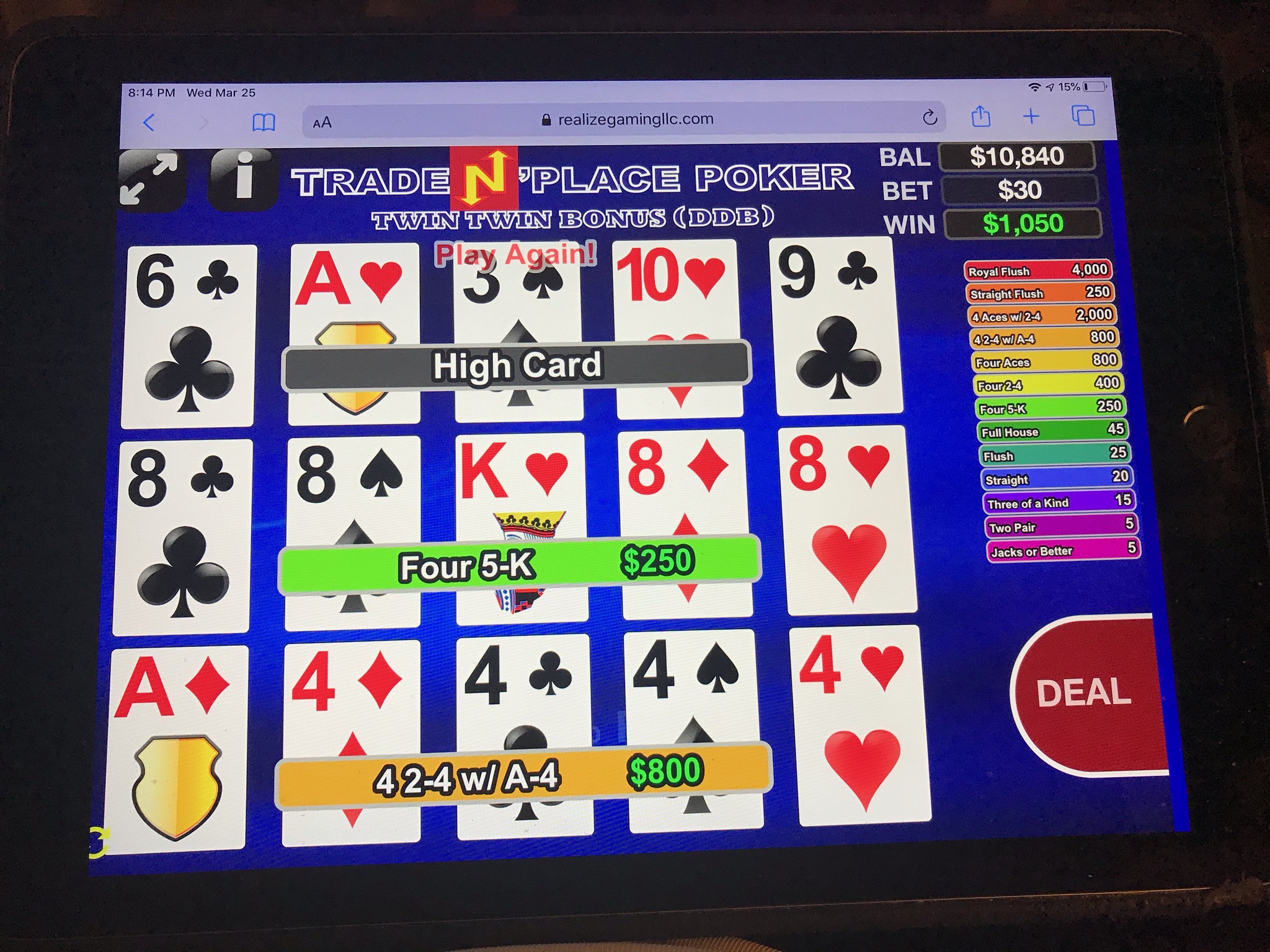 Here is a pretty rare hand of two four of a kinds in one game.

More rare than that was the fact that you were LOSING before this hand! Were you intentionally trying to lose?
VladAlex1

Here is a pretty rare hand of two four of a kinds in one game.

More rare than that was the fact that you were LOSING before this hand! Were you intentionally trying to lose?

My brother sent it to me last night. He said he was only playing for a very short amount of time.
RSS Feed