Here is an idea and I reserve all rights to it.

Something like what you're doing but give the extra draws on only certain types of hands. I'm thinking four to a royal certainly but maybe also three to a royal and three of a kind. Player has to bet an extra coin or two per hand to enable the feature. It is possible this idea is already out there, which may be why it so easily springs to mind.

Sadly for you reserving the rights, Mission said essentially the same thing two posts up. My post before that suggested extra coin in to pay for the multicard and multipliers. Maybe that's why it came so easily.

Great minds and all that....lol.
If the House lost every hand, they wouldn't deal the game.
RealizeGaming

The glitch with the discard showing up in the stack has been corrected now. Please let me know if you see anything else.
Mission146

Here is an idea and I reserve all rights to it.

Something like what you're doing but give the extra draws on only certain types of hands. I'm thinking four to a royal certainly but maybe also three to a royal and three of a kind. Player has to bet an extra coin or two per hand to enable the feature. It is possible this idea is already out there, which may be why it so easily springs to mind.

I beat you to that post, and I reserve the rights...lol ;)
Vultures can't be choosers.
Mission146

I kind of like having a chance at winning some of the smaller hands. I think having the possibility of getting a multiplier also helps out quite a bit on the lower hands. It is similar to the slot players who don't mind playing 300 pennies and winning 40 cents. As long as they are winning something to gain some of their money back, they can live with that outcome.

I totally get your thinking on using the MD for only certain hands. With your parameters you mentioned above, I would also include straights where they are one card away from it. When you start considering all the hands, we felt it would be better to use the MD randomly on the draw because we wanted it to affect all the hands.

Straight draws are probably fine. I just feel like it comes up too often randomly and doesn't really add a ton of value, at least, not considering how much less frequently it's going to have to come up, anyway, if you want to not require an additional bet.

Double Double Bonus which takes advantage of a kicker for some of the bigger hands would also be an interesting use for the MD card. Imagine getting dealt four aces and the open card position reveals a MD card.....several chances to pick up the low kicker on more than one hand!

I'd be interested to find out how much VP players would be willing to bet for the MD card possibility. I think the highest game doubles the initial bet, but would players be okay with betting 3x or 4x as much?

Thanks for your response Mission

Deuces Wild, all kinds of good games for something like this to come into play. It'll definitely change the strategy, too. I'll demo it some more on your site when you come up with a viable paytable/probability/frequency.

I wouldn't want to bet 3x-4x and see a hand such as JoB without the multi-card. That would get annoying in a serious hurry. I think 2x is pretty much the standard because you at least get half of your money back on hands such as that. If you don't want to only make the extra draw for certain hands, then I would focus on maybe doubling the required bet amount and reducing the frequency of the multi-draw.

Don't forget that this game would also be competing indirectly with something like Six-Card poker, a game in which you get the sixth card all of the time.
Vultures can't be choosers.
RealizeGaming

RealizeGaming
Joined: Aug 1, 2013
Here's a couple screens of some of the ideas discussed by my team and some members of the forum. The first two screens show the player needing to bet twice the amount in order to receive the MD card. I'm not a big fan of this option especially if the opening deal has already been displayed. I do like the double wager amount and that will probably be our base going forward. 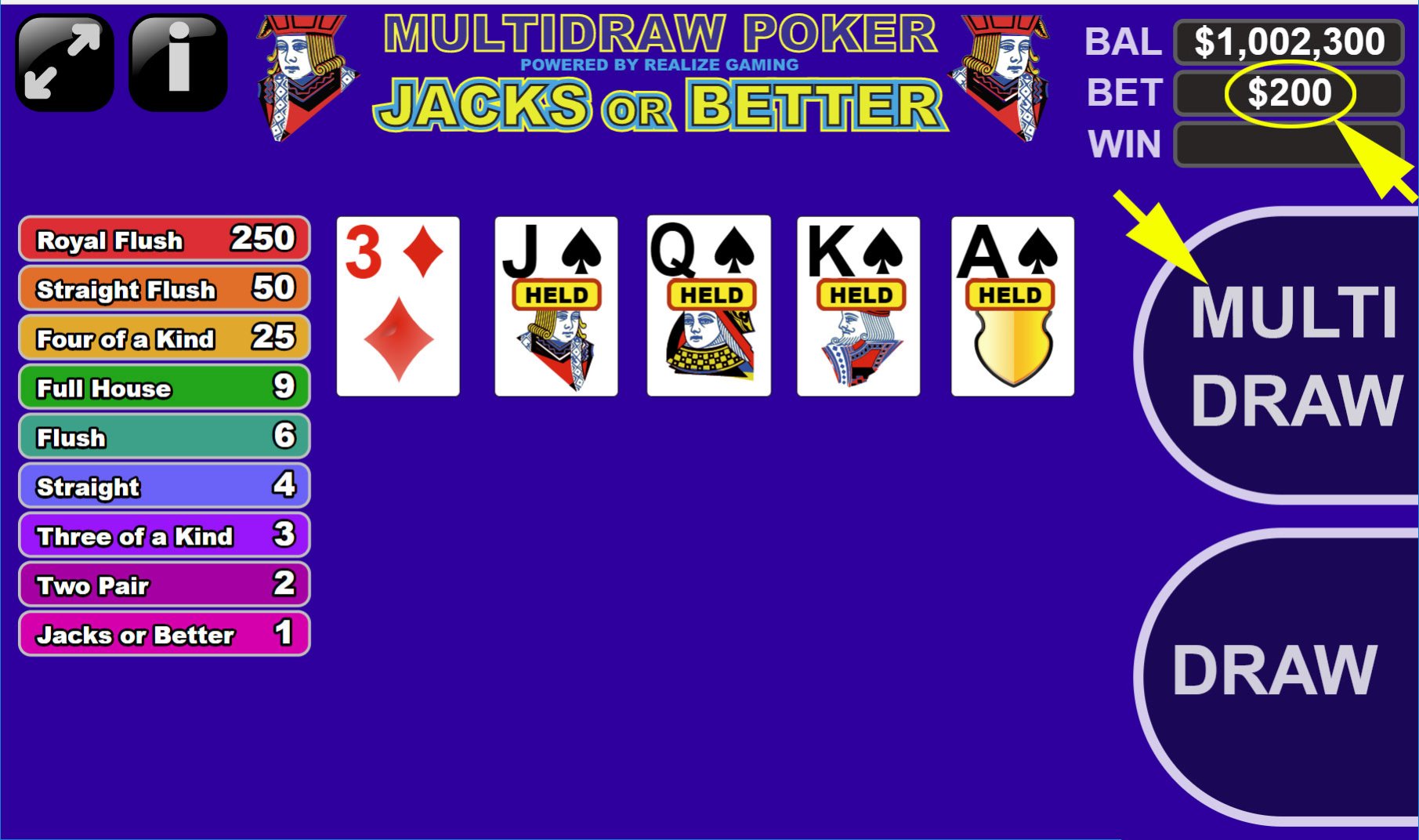 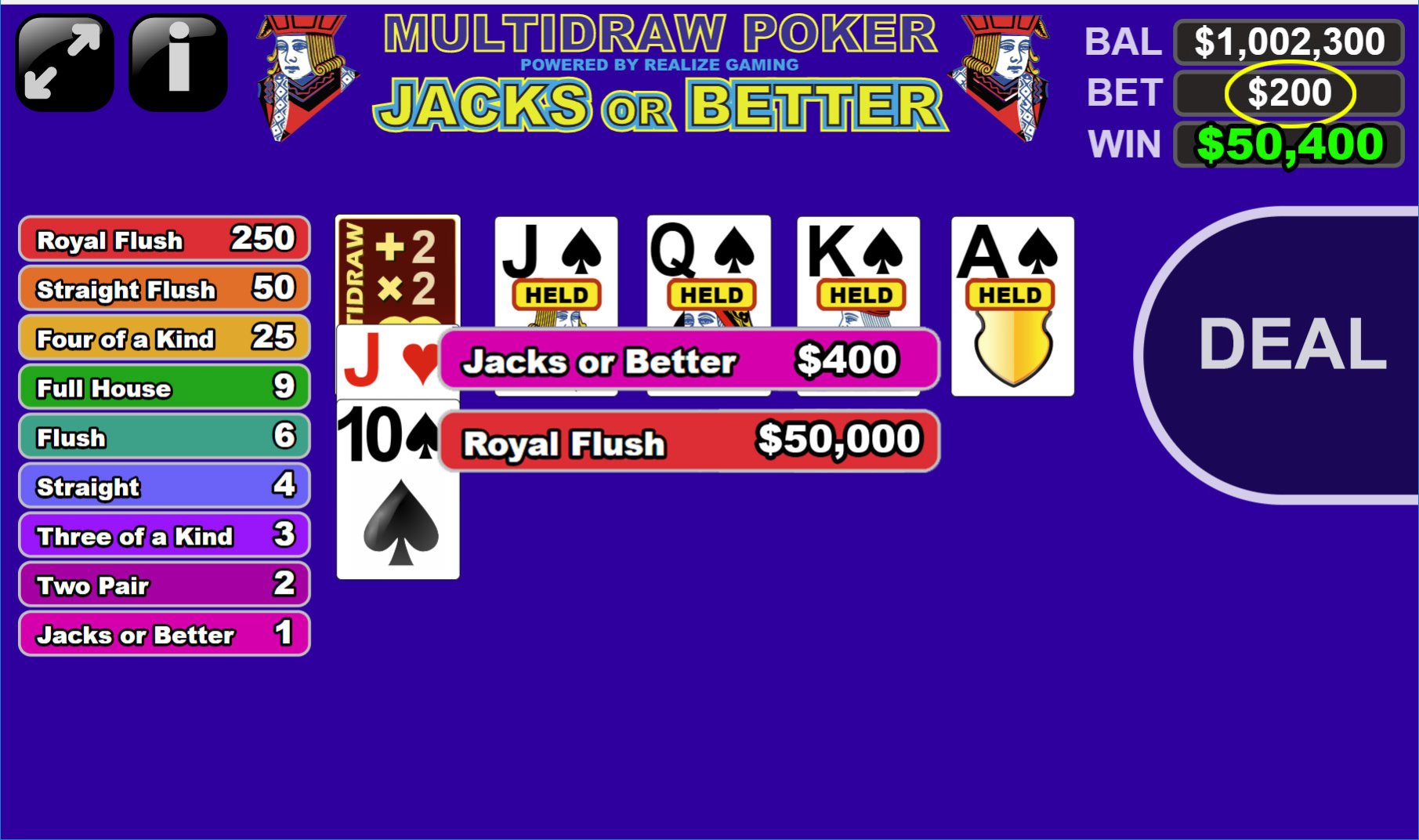 Here's another option which allows the player to choose how many draws they would like. This is another intriguing option, but players will only want to use this when the cards are in their favor. Secondly, the pay scale for each additional card dealt into the hand as a result of the MD card would have to adjust the pay scale each time. It reminds me of a game that was on the old Bally GameMakers a number of years ago called Second Chance Poker or something like that. Basically, after the ending hand, the player had options to buy another chance (card) to improve their hand. Each time they did this the pay scale adjusted accordingly based on the number of cards left in the deck and how the hand could be improved. 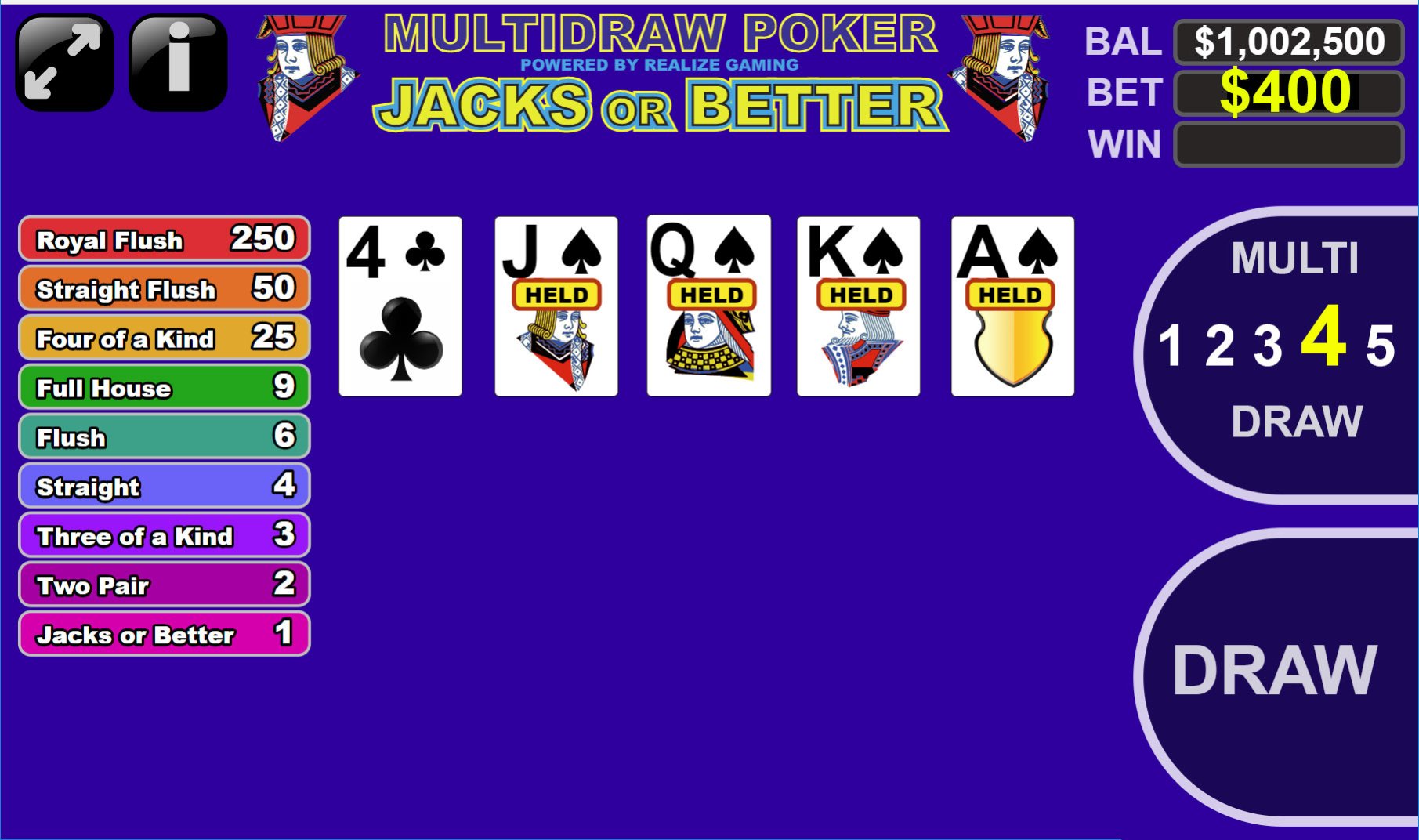 RealizeGaming
Joined: Aug 1, 2013
We have finally finished the math for MultiDraw Jacks or Better. We were able to use 9-6 pay scale and the return on the game is 96.38% based on 1 billion simulation rounds using the simple 16 rule strategy located here at the wizardofvegas website. For each open card position, the MD card has an opportunity to appear 1 out of 9 times.

For more information on the pay scale and probabilities for each hand, click on the information button from the game screen.

Play the updated 9-6 demo by following this link:
http://realizegamingllc.com/dev/mdPoker96RTP/

Please let me know if you have any feedback on the game. A few things we are thinking about:

1. Is the frequency of the appearance of the MD card acceptable? Not too much, not too little.

2. Is the breakdown for the bonus games acceptable? 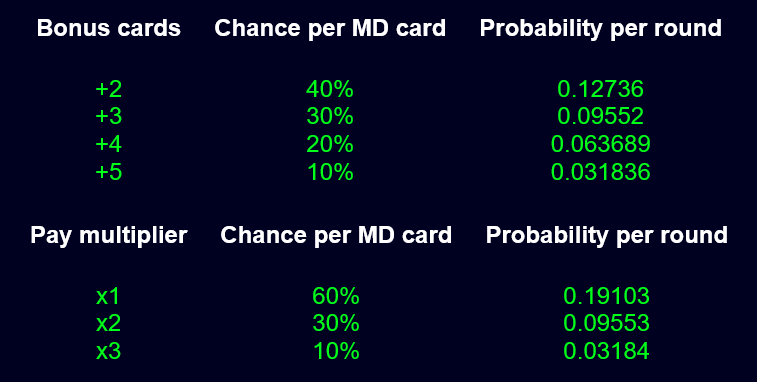 3. Would players be okay paying double amount for each game?

4. Would you like to see additional games using the MD card? I've always viewed Jacks or Better as being safe and feel like the game may shine even better when using Deuces wild or Double Double Bonus Poker.
VladAlex1

Played this game for about 100 rounds
http://realizegamingllc.com/dev/mdPoker96RTP/
I’d rather have to be a lucky player than good one.
boymimbo

boymimbo
Joined: Nov 12, 2009
When you think about games like this, there is STP which seems to occur every 25th hand or so where you bet one extra coin per hand to get the multiplier, and the average multiplier x the frequency would be close to one to make is sort of equal to VP with a multiplier average of 1.2 per hand to get the variance right.

Similarly in your game, the multiplier is exactly like STP but it is doubled/tripled/etc based on the number of extra cards you get.
So essentially you have to reduce the frequency and increase the bet amount to get there.
The most you could ever increase the bet is to a double amount like UTP or other games you find on VP.com that give you bonus cards, extra payouts etc.
Then you adjust your multipliers to match. So for example if you put in 2 units every hand, you would get multipliers and extra cards that balance out to the double bet.

I would have the multiplier card appear once every 11 hands with a total multiplier average / extra card average of x 11, in combinations of 2 - 5x.

I would not touch the pay tables except to make it stingy.
----- You want the truth! You can't handle the truth!
Mission146

1.) Unfortunately, I don't believe that paytable would be approved by Gaming because it has a lower return to player (greater house edge) than does 9/6 Jacks Straight up.

A paytable that would give you more wiggle room would be 9/5 Jacks, then you might be able to adjust it on the multiplier end. Alternatively, I suppose you could always incorporate some sort of Royal Flush bonus to make up the difference.

3.) I would still recommend only giving it a random chance of coming up on certain holds, or even making it guaranteed, but this is at least the beginning of a viable game.
Vultures can't be choosers.
Romes

I like the game, though I wish the multipliers were a touch bigger. Nothing like getting a 10x or 12x on ultimate and hitting a decent hand =P.
Playing it correctly means you've already won.
RSS Feed