Trip is off to an interesting start, to say the least. 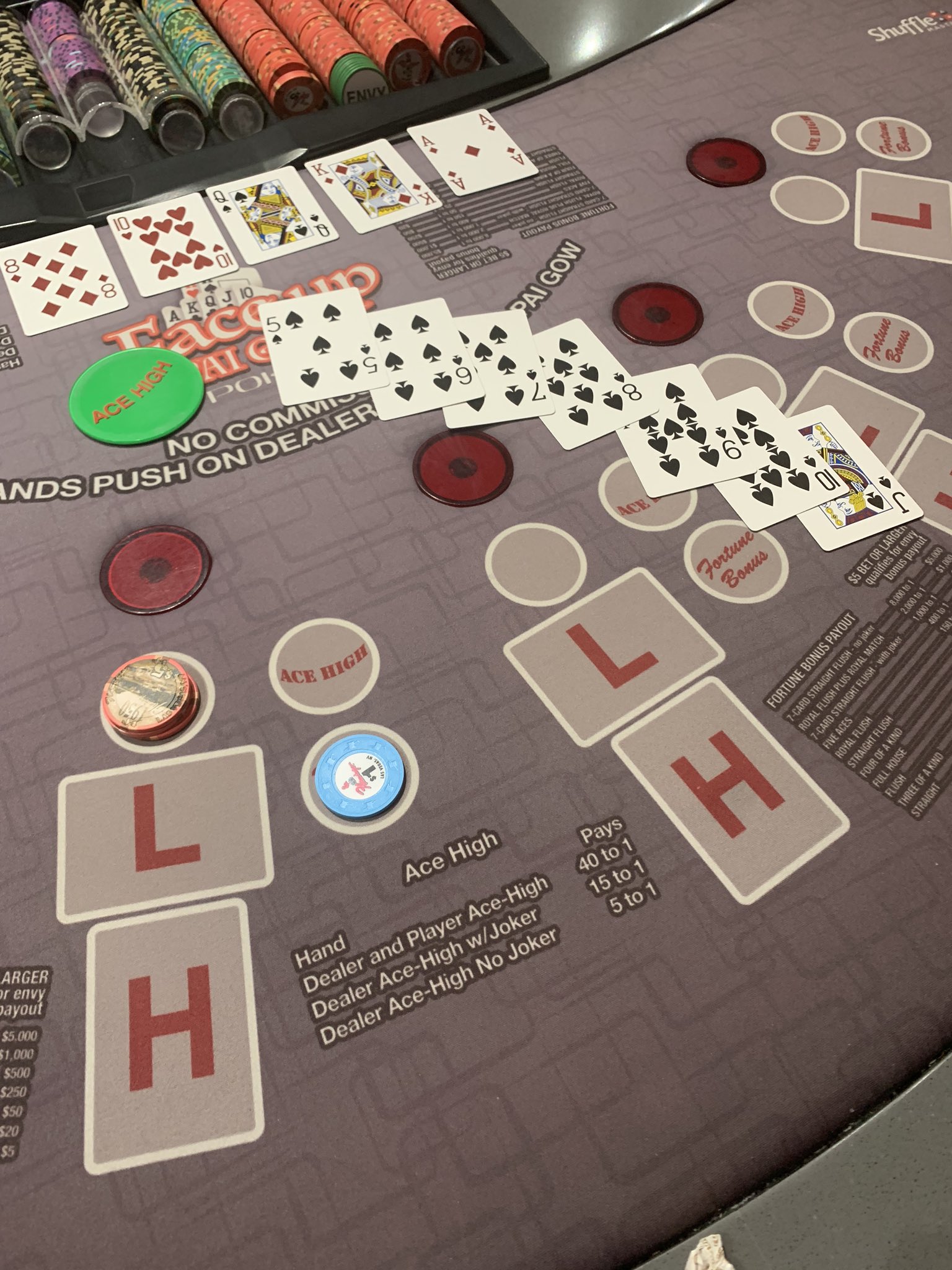 Congratulations! At least you had $1 bet on the Fortune, $1 more than I would have.

ams288
Joined: Sep 26, 2012
So, my flight was early yesterday morning. I was not prepared for how deserted the airport would be. There were only like four restaurants open and I didn’t see any of the stores open in the terminal (it’s a huge terminal). Made me sad for all the jobs that still need to come back. The flight itself was nice - Delta. No middle seats occupied. The rear of the plane boards first (which is how it always should be! None of this zone nonsense). They still give out food, you just don’t really have a choice as to what you get (they had pre-packaged bags with a bottle of water, a couple of snacks, and hand santizer).

Arrived in LAS on time. Went to rent a car. I typically rent from Budget via Costco Travel cause it’s usually cheapest. Unfortunately, they said they were “understaffed” so there was no Fastbreak service and I had to wait in a long line to get my car. Usually it’s already waiting for me when I get there. Also, it seemed like they were really short on cars. There were hardly any cars down in their area of the garage when I got to mine. Usually it’s pretty much full.

Checked into the MGM. Uneventful. Stayed here a million times. They leave you a little social distancing goodie bag in your room. 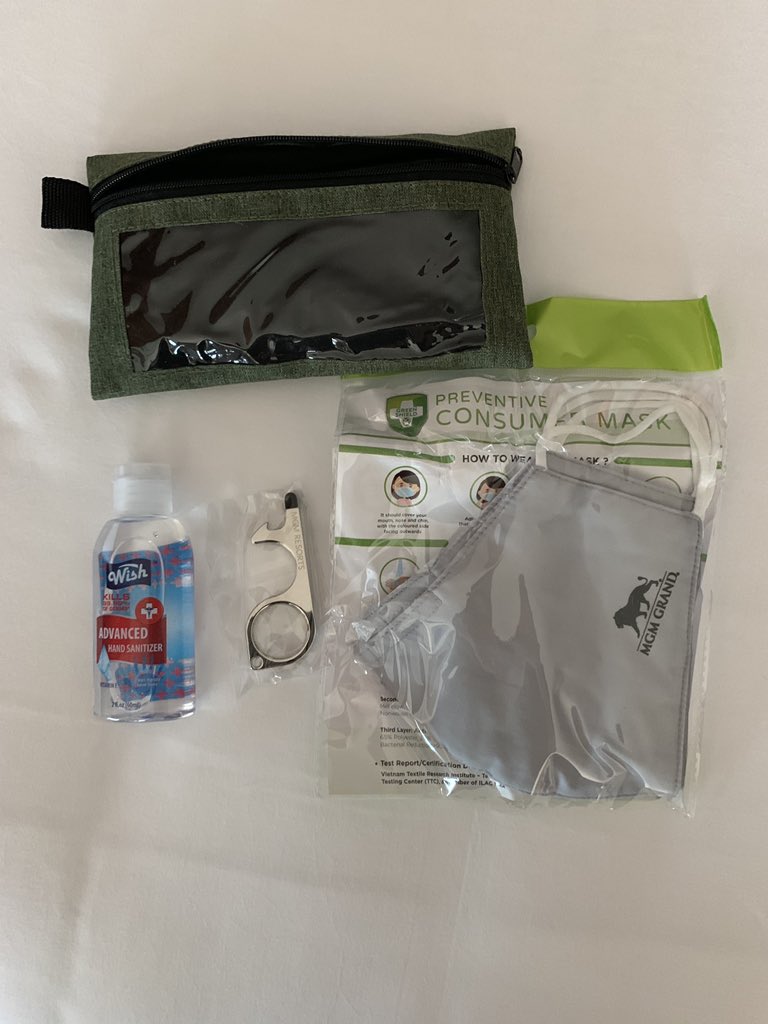 The little key-looking-thing is a stylus so you don’t have to touch elevator keys. (I’ll save those nice MGM-branded masks as a souvenir. Plenty of free masks available in the casino).

By the time I was all settled in, I was starving so I went to NYNY and had a slice of pizza. Wanted to play Pai Gow, but their table was $50 minimum. Too rich for my blood. Later the table was reserved for the whole night and empty, so they must have a Pai Gow- loving high roller staying there right now. Played roulette instead - it was boring. Lost $100. They only have one double 0 table, the rest are triple 0.

Went back to the MGM. Went down to the pool. They are limiting occupancy to the pool so I had to wait in a really long annoying line to get in to the pool area. When someone leaves the pool, they let someone from the line in. When I finally got in, the lazy river portion was at max capacity so I could only swim in one of the regular pools. Annoying. The lazy river is the reason to go to the MGM pool. Took a quick dip, laid in the sun for a while, then went back to my room.

Decided to go check out the Bellagio. Drove over, and when I pulled into the driveway they had security guards in each lane. He asked me what I was there for. I told him just to gamble, he said the parking garage was at capacity so only hotel guests were allowed to park there and I’d have to leave. So I decided to go to the Flamingo instead - if you saw my first post, you know that worked out pretty well for me!
Ding Dong the Witch is Dead
Yoyomama

Never heard of the game. How much did the straight flush pay?

Never heard of the game. How much did the straight flush pay?

this is pai gow.
fortune bet is the side bet.

the table says $5+ fortune bet also gets the Envy bet. (you also win when someone else on the table wins a Fortune bet, i think?)

for $1 Fortune bet:
it looks like a 7card straight flush pays 8000:1, so $8k
Craps is paradise (Pair of dice). Lets hear it for the SpeedCount Mathletes :)
ddloml

ddloml
Joined: Dec 5, 2009
Nice win! At Caesar’s properties, is that other bonus bet still at $5? If you had played it, what would you have won?

Are you allowed to set your hand and touch the cards? Just wondering how that works now with Co-vid practices taking over.
ams288

Nice win! At Caesar’s properties, is that other bonus bet still at $5? If you had played it, what would you have won?

Are you allowed to set your hand and touch the cards? Just wondering how that works now with Co-vid practices taking over.

The progressive was at $1.6 million. Had I been betting $5 on the progressive every hand, I would have never lasted at that table. My chip stack was down to my last bet a couple of times before I hit the straight flush.

Yes, you touch the cards at MGM and Caesars properties. MGM has plexiglass shields on their tables so no masks are required, Flamingo doesn’t so you have to wear a mask while playing.
Ding Dong the Witch is Dead
EvenBob

Played roulette instead - it was boring.

The least boring game in the
casino. That you found it
boring speaks volumes.
Priceless. lol
"It's not enough to succeed, your friends must fail." Gore Vidal
Vegasrider

Vegasrider
Joined: Dec 23, 2017
Nice trip report, thanks for sharing. Nice hit as well. Renting a car in Vegas sucks, just like the rest of the airports that require you to hop on a shuttle and take you off airport property. This is why my friends love visiting me here in Reno. Rental cars are literally parked about 150 ft from the baggage claim doors and you can go to the rental counter and pick up your keys while you wait for your bags since it’s right behind the carrousel. But you’re not going to find any outdoors pools close to what Vegas has.
RSS Feed