PokerGrinder
Joined: Apr 30, 2015
Me being silly on the airport bed chair. 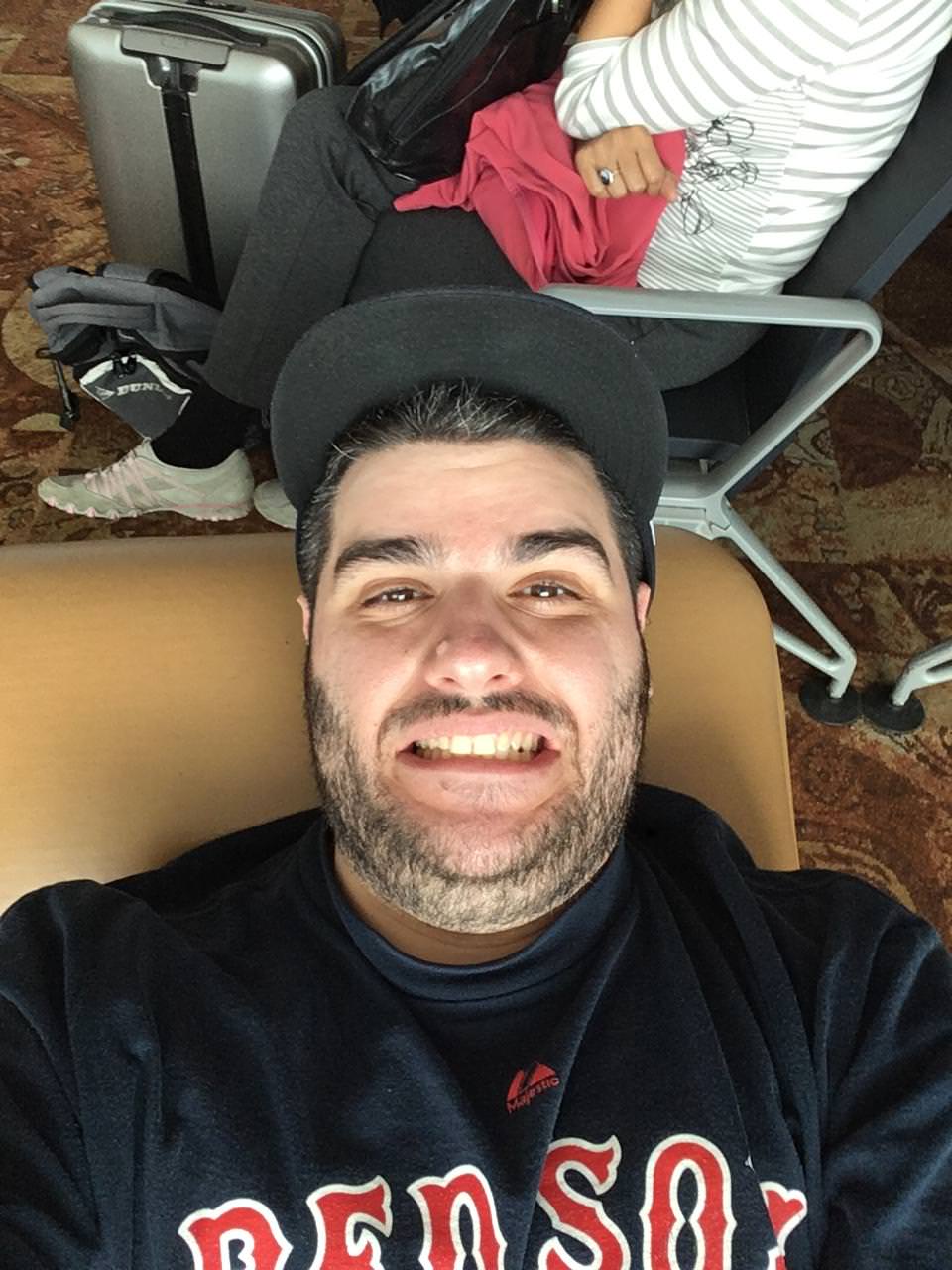 Well the yesterday was not boring, I think that is a good way to put it. My plane landed, I grabbed my bag and I went in search of a taxi. Its about 90 minutes from the airport to my hostel. Varanasi doesn’t have a metro system and no buses from at the airport so a taxi is the only option. I left the airport and immediately got swarmed by drivers I knew roughly how much the ride should be and I agreed on 600 rupees after he asked for 850. I got to the cab and he wanted to take another guy too, I said no. He insisted I said that’s not what we agreed on and walked away. He yelled 500 rupees I said no and said I’d share the cab for 400. He agreed, then I find out he wants another passenger, now this is getting ridiculous. Also he now wants to only go as far as the bus station which is still 30 minutes to the hostel. I was irritated with him and I said I’d give him 200 to the bus or I walk back to the airport and get a different taxi. He agreed and then he found another passenger, finally we were off! First though two of his friends pushed the car before he started it, I’m not sure why it was necessary for this crap car to start but it was.

The new passenger paid 500 rupees, I paid 200 and I think the third guy who was a local paid 100 or 150. The drive was insane! The roads are barely paved and they have bumps and wholes everywhere. It’s barely one lane of road and they use it as a two way street. There are buses, bikes, scooters, motorcycles, Tuk Tuks and cars all sharing this “road”. Everyone honks nonstop and the drivers drive wherever they want without a care in the world. As well there are people walking with traffic, against traffic and across the street. That mixed with the cows, dogs and the occasional goat makes the roads ridiculous.

We arrived at the bus station and the fun started. Varanasi doesn’t have uber but they use another app called Ola. It’s basically the same thing. I ordered an Ola and he got close to me and then called. I answered but he spoke Hindi and didn’t understand me at all. I eventually asked another driver to talk to him and it sounded like all was good. All was not good. 15 minutes pass and he calls me a few more times, he wants me to walk somewhere but I don’t know where. He says walk and what I think sounds like bridge. Just as I’m about to give up I decided to walk across the street and I see a guy waving to me... I found the driver! He was a very nice man and he got me right to my hostel without problems. He was a good driver and didn’t honk his horn once which was very odd. The fare was 178 rupees but I gave him 240 because I felt bad that it took so long for him to find me.
These are pictures from the drive, the poverty here is insane. 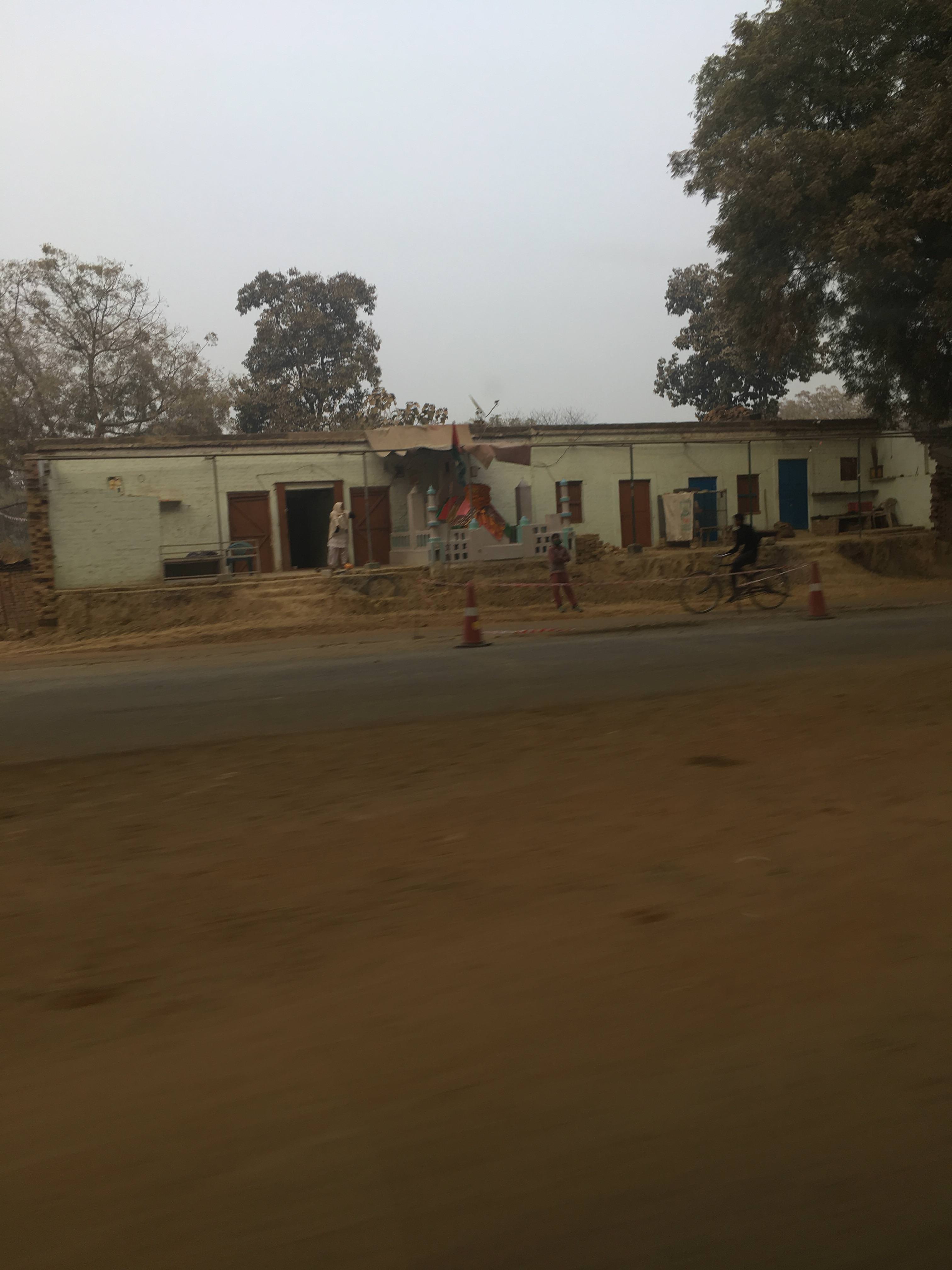 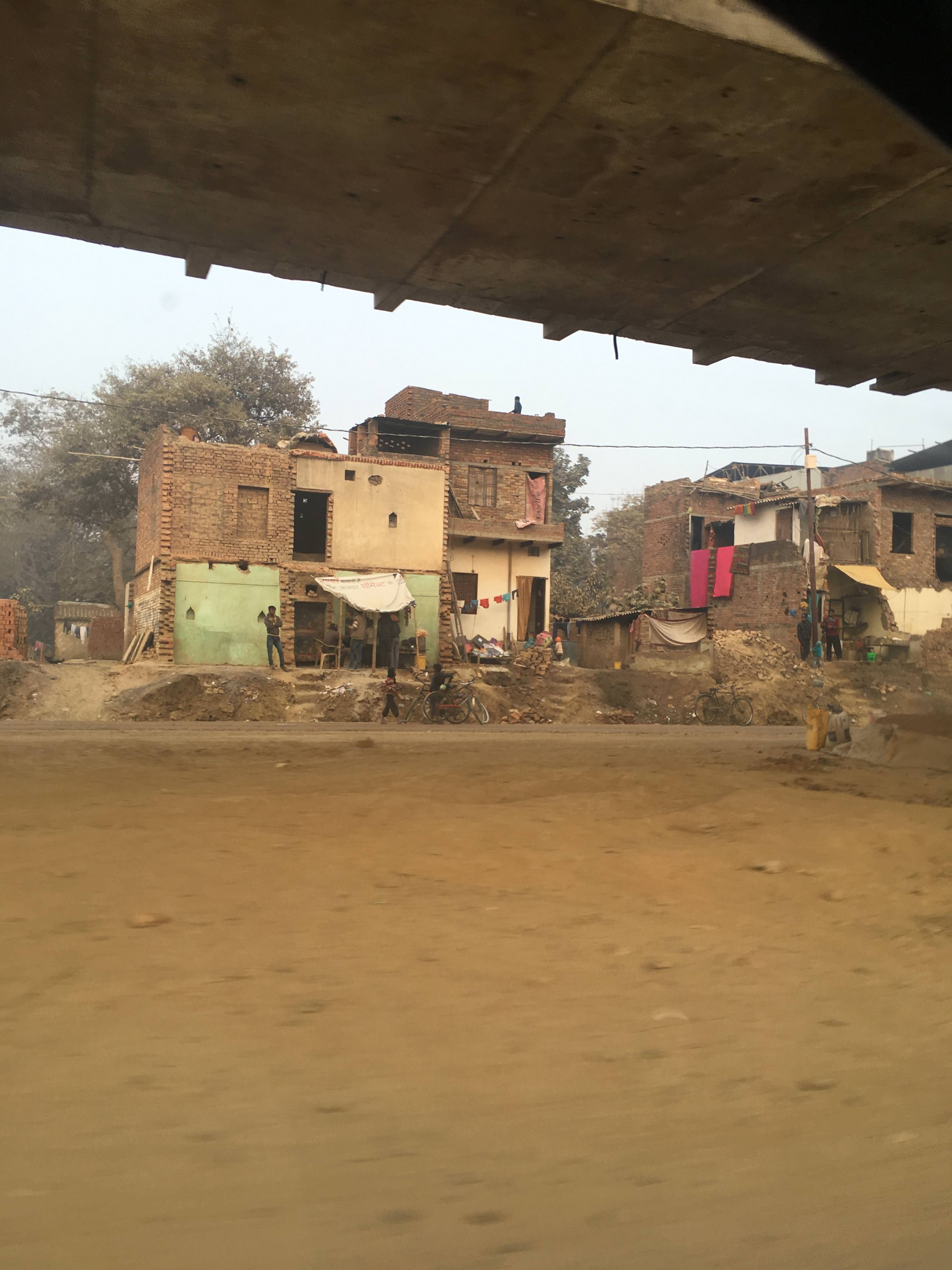 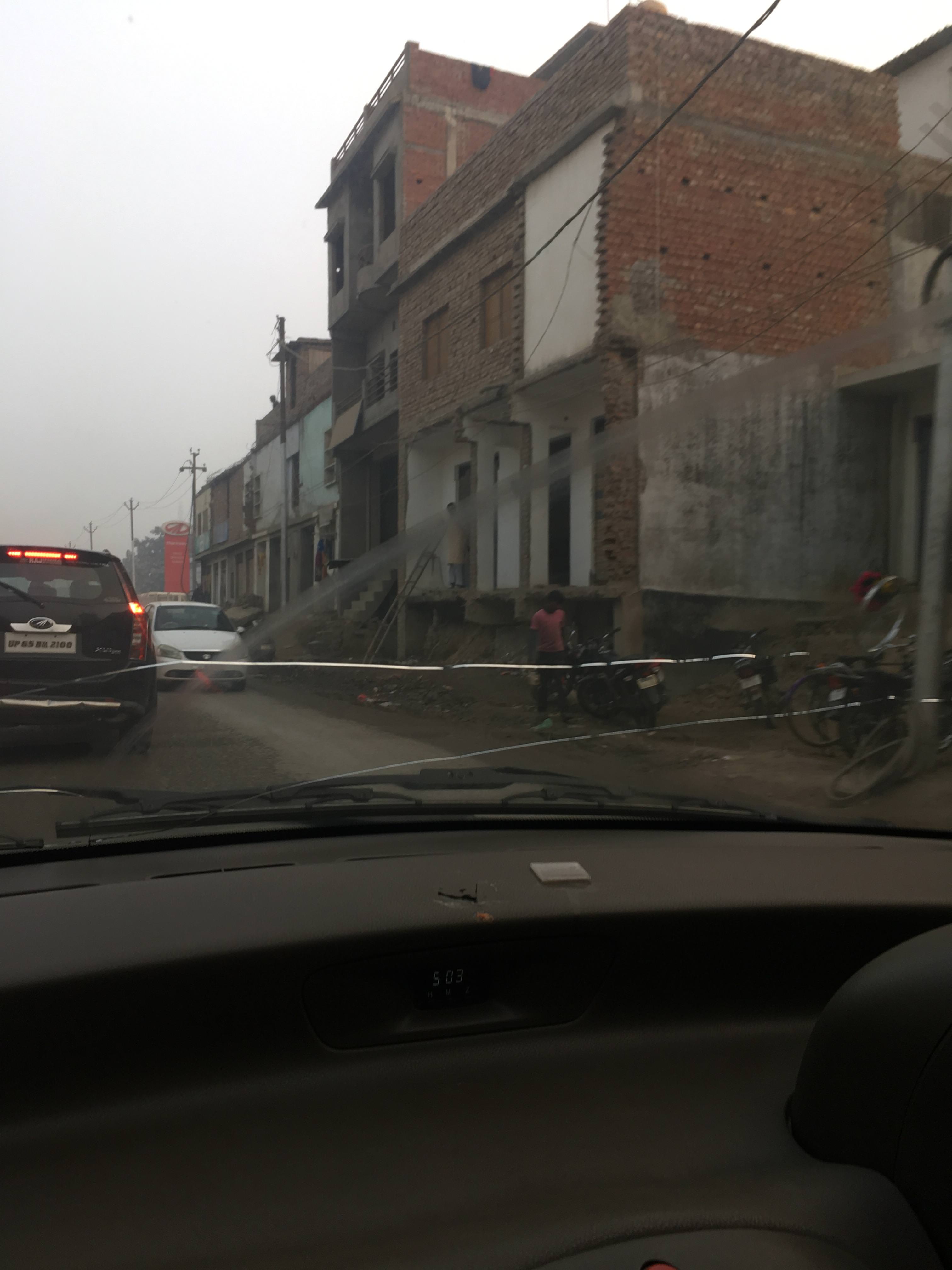 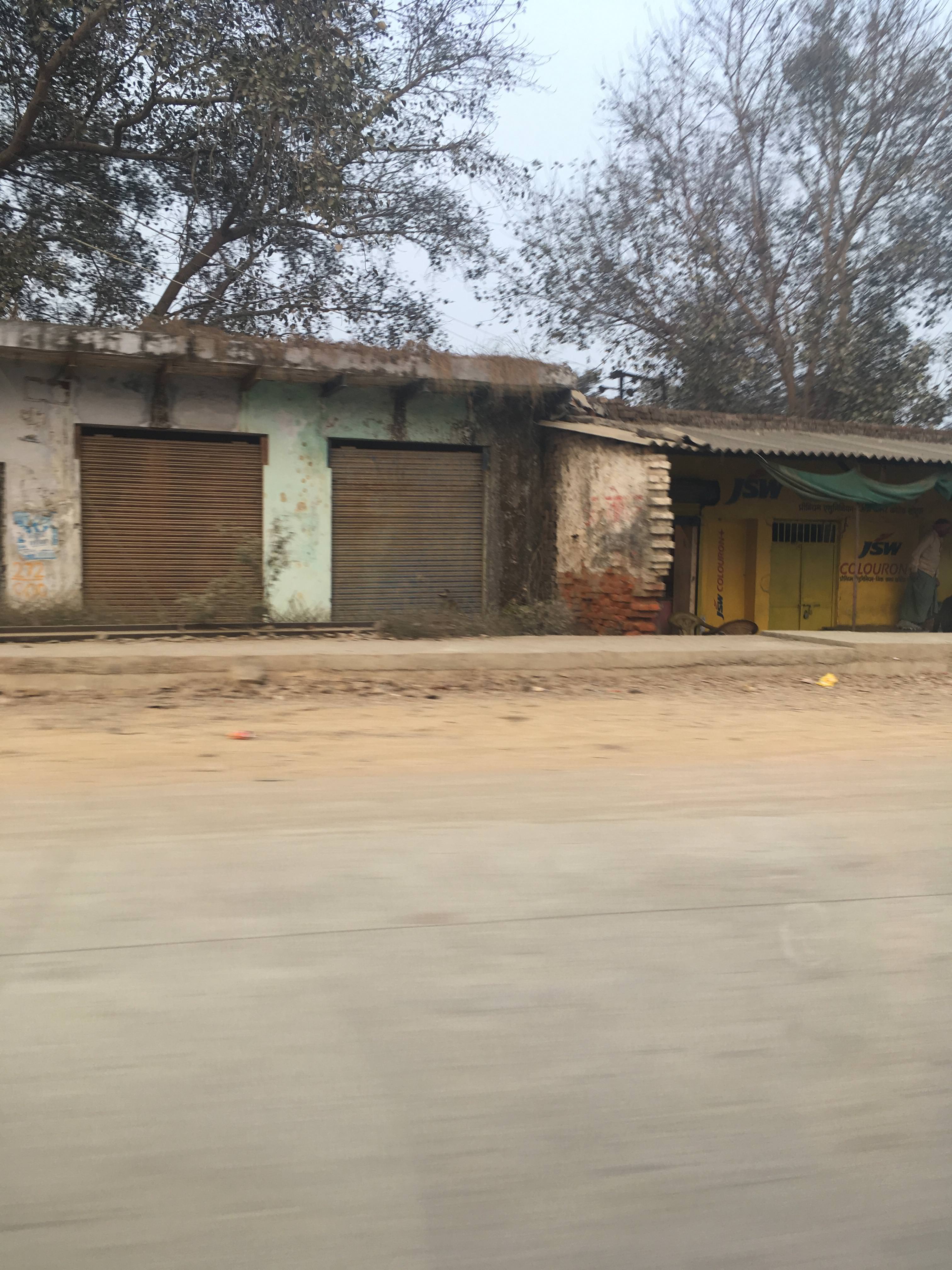 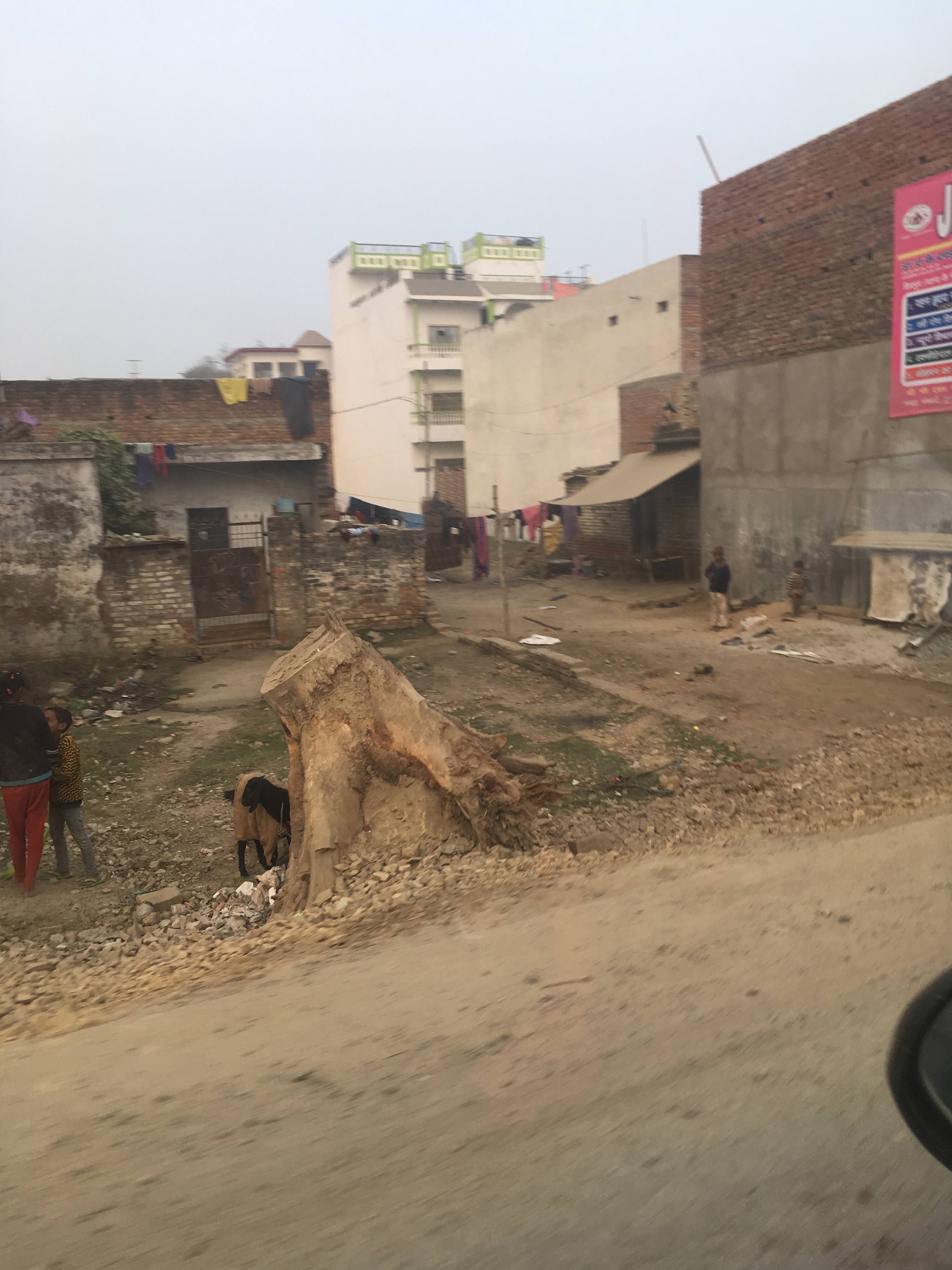 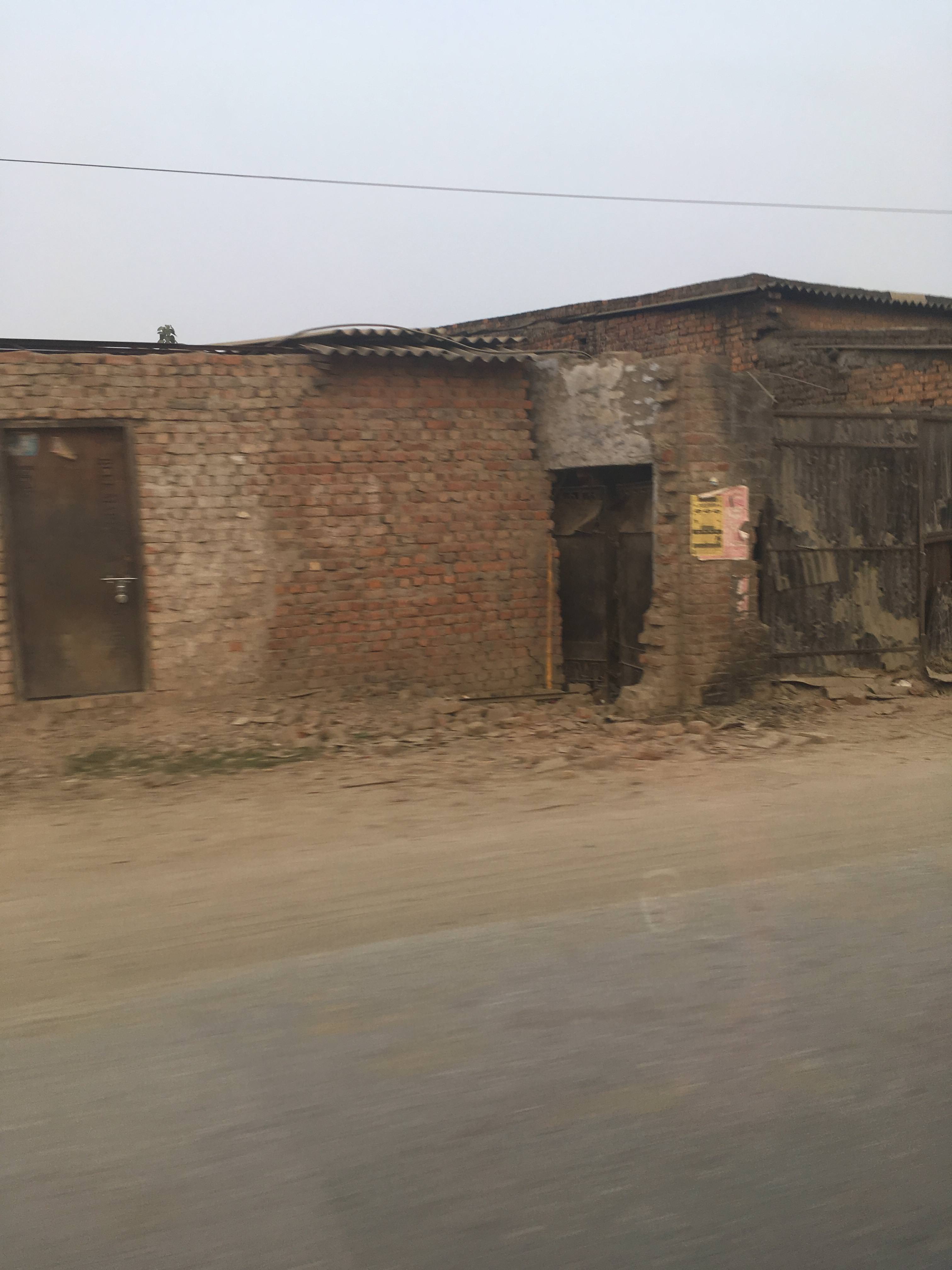 At the hostel the worker told me to go to Kalika Dhaba Banaras for dinner. He puts it into my maps and I walked the ten minutes to the restaurant. The food was amazing! 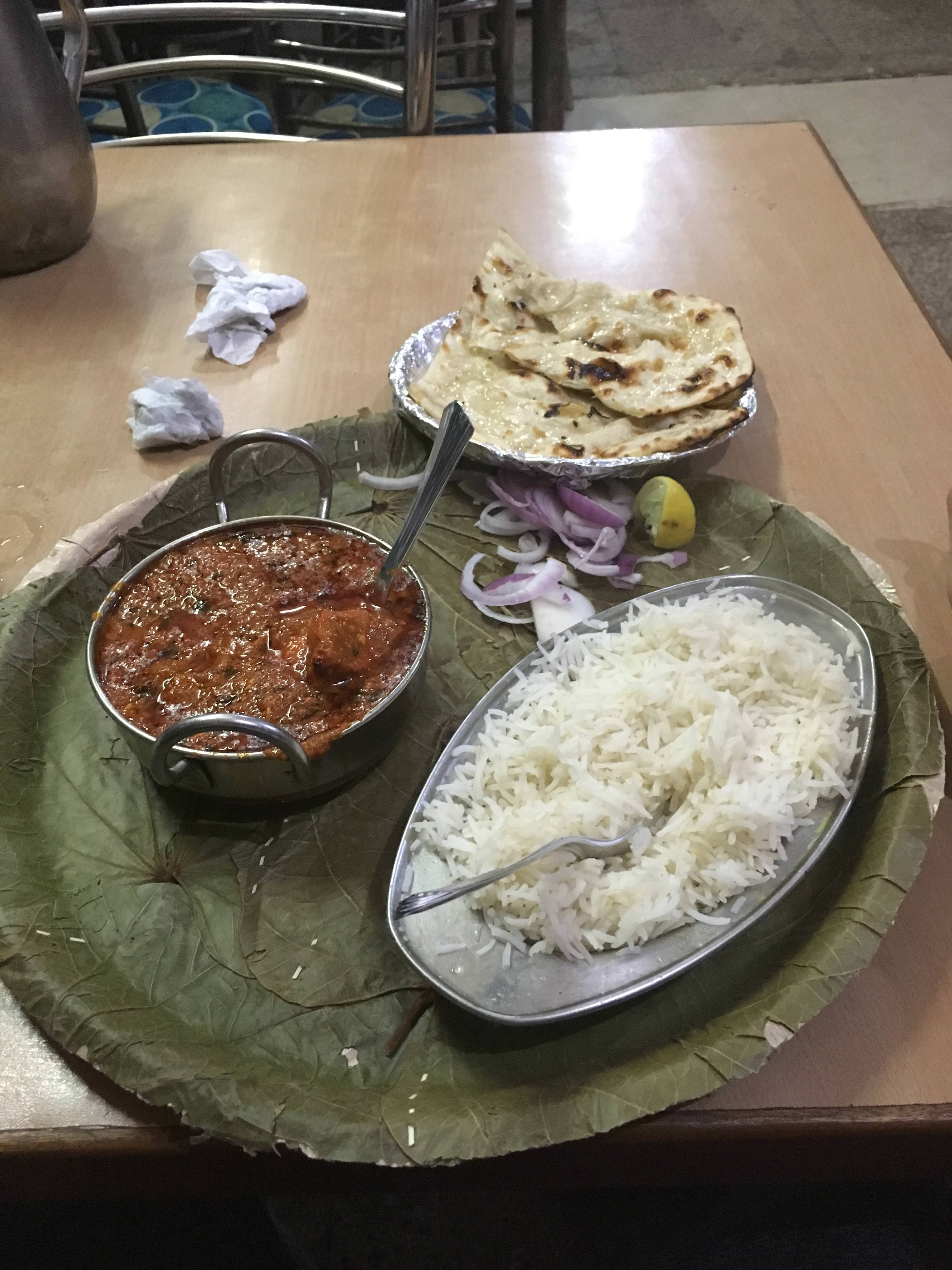 I had the half order of chicken tikka masala with rice, naan and a chapati which is a type of bread. The flavours were out of this world, I’m really not sure how to describe it. I ate everything, paid and said thank you to the owner. Just outside of the restaurant were two dogs, a puppy and two cows going through the garbage. The cow would tip it over and they all would go through it. One of the dogs kept barking at the cows to back away from his garbage and the cows seemed intimidated by him. I walked back to the hostel and took it easy until falling asleep.
Cow outside my hostel. 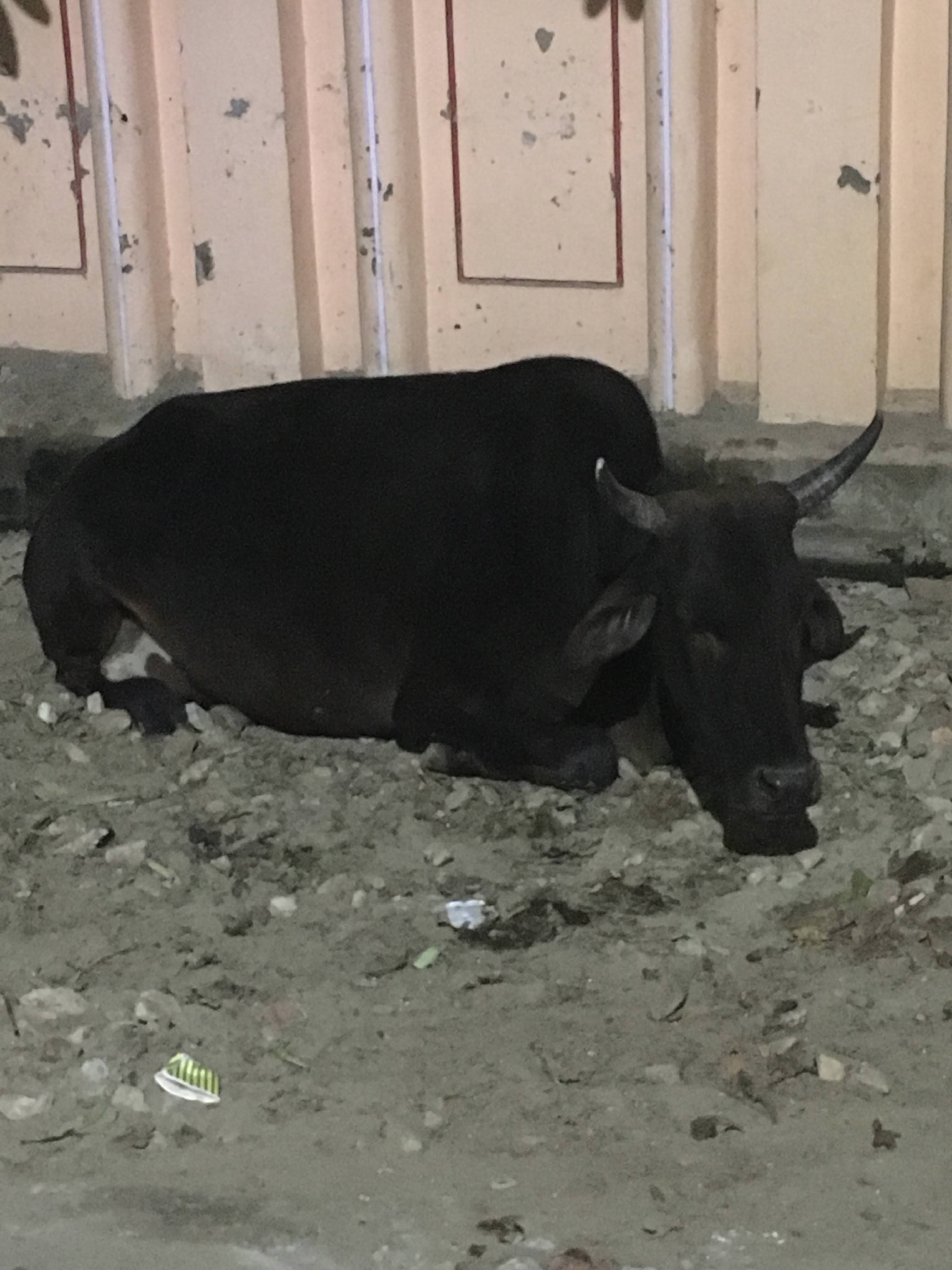 A couple tidbits about India so far. At some of the monuments I’ve had locals want to take pictures with me which I knew would happen but it’s still weird when they ask. At the Lotus Temple this group of kids asked my name and then giggled. One of them asked me something else that I didn’t catch and I eventually told them where I was from because I thought that’s what they wanted to know. They kept giggling to themselves. They said a couple more things and asked my name, all the while they couldn’t stop laughing. I’m not sure what was so funny, possibly just that I was different looking than them?

The people of India are so kind, the only ones I have had a problem with are the ones involved with transportation. I have found that it seems like they are just there to scam you as much as they can which is why I’ve used ride sharing apps as much as possible so that the price is preset. That’s all I’ve got for now. I’m going to go explore for a while. Bye!
Last edited by: unnamed administrator on Jan 13, 2018
You can shear a sheep a hundred times, but you can skin it only once. — Amarillo Slim Preston
Romes

Romes
Joined: Jul 22, 2014
Thanks for the posts PG... What a crazy adventure you're on. Hope India is fun! Look forward to the next post =D.
Playing it correctly means you've already won.
PokerGrinder

PokerGrinder
Joined: Apr 30, 2015
Thank Romes! It is crazy lol, I’m having fun but at the same time there are points where I wonder why I came here. Sometimes it just seems like too much but for the most apart India is amazing.
You can shear a sheep a hundred times, but you can skin it only once. — Amarillo Slim Preston
MrV
MrV
Joined: Feb 13, 2010
Will you be taking ritual ablution on the banks of the Ganges at The Ghats?

Pics of that area and the pilgrims in the river would be cool.
"What, me worry?"
GWAE

GWAE
Joined: Sep 20, 2013
You say lots of poverty. Is it poverty or just a way of living? Everything is so cheap maybe that is just the standard.
Expect the worst and you will never be disappointed. I AM NOT PART OF GWAE RADIO SHOW
FleaStiff

FleaStiff
Joined: Oct 19, 2009
Ganges? I've heard its an open sewer, at least the lower part. Ofcourse this is from the National Enquirer but . . . .
GWAE

GWAE
Joined: Sep 20, 2013
With as cheap as it is there. Could I just take 50k and live like a king for life? Or is their version of living like a king the same as living poor here?
Expect the worst and you will never be disappointed. I AM NOT PART OF GWAE RADIO SHOW
PokerGrinder

PokerGrinder
Joined: Apr 30, 2015
Mr. V I’m not 100% what your question meant but I’m assuming you’re asking about the burning Ghat? I walked along the Ganges for hours through all the Ghats today and watched the burning of the bodies.

GWAE it’s hard for you to understand what I mean without seeing it. This is poverty, no two ways about it. There are obviously nicer areas but I haven’t seen much of them. I drove through what looked like a nicer shopping area yesterday. 50k wouldn’t last you very long if you want to live like a king. You can spend $100-$150 a night on a nice hotel if you want. I also assume that there are restaurants that cost a lot. It might be a poor city but they want to cater to rich travelers and rich travelers aren’t staying where I’m willing to stay. My taxi driver said tourism is the number industry in Varanasi.
You can shear a sheep a hundred times, but you can skin it only once. — Amarillo Slim Preston
AB21

AB21
Joined: Dec 2, 2012
Another great trip report PG! Thanks again for taking the time to share your adventures with us. I wish I would have taken time off to do some adventure travelling when I was your age. Best I did was spend a couple of weeks hitchhiking through BC in the early 80’s - the same time Clifford Olson was roaming around murdering kids my age.

You are missing some great weather back home. It hit -38 C in my neck of the woods in Alberta last night. Winnipeg was slightly better at -31. For those of you not into metric, -40 C = -40 F = frickin cold!

Anyway, have fun and keep the reports coming - a very enjoyable read!
HornHighYo11