Okay, let's look at the next straight hand: 543-xxxx. The only limit on the four kickers here is that none of them can be a 6 or a 2, because that would cause the straight to be 4-cards or longer. 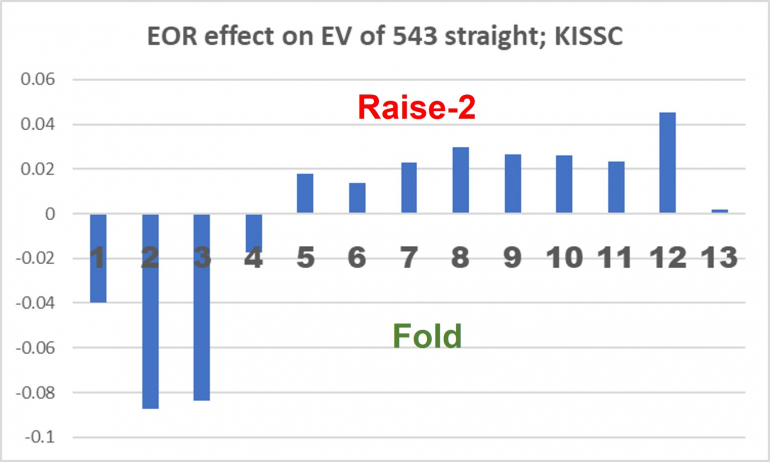 The Effect of Removal for a 2 or 3 is huge: ΔEV > -0.083 (note I've included 2 and 6 in this chart, even though they are defined to not be in a 543 hand, because they could be in your neighbor's hand.) That's easy to understand. The only dealer 3-card straights that a 543 can beat are 32A and 432; and the removal of a 3 or a 2 from the deck will reduce the probability of both the 32A and 432 straights from occurring. Ace is also a card whose removal hurts the EV of a 543 straight, primarily because it blocks the 32A straight from occurring in dealer's hand

The hand 543-3334 is the worst possible variant of a 543 hand that player can hold; it has an EV = -1.12555. Note that with all four 3s in the deck you have completely eliminated any chance of the dealer have a 32A or 432 straight, and thus you only avoid losing when the dealer's hand Does Not Qualify (with maximum straight length of 2 or 1.) In this circumstance the addition of an Ace in this hand is superfluous in lowering EV because the 32A straight already has no chance of occurring, so the 4 becomes the worst card to add to a 543-3333 hand.

These exceptions will occur very infrequently in player's hand, so as a practical manner this perfect strategy is a negligible improvement over "Always Raise-2 with 543 straight."
So many better men, a few of them friends, are dead. And a thousand thousand slimy things live on, and so do I.
gordonm888
Administrator

When you have a JTP 3-card straight and use this strategy, you will only Raise-4 a bit more frequently than 1% of the time.
So many better men, a few of them friends, are dead. And a thousand thousand slimy things live on, and so do I.
gordonm888
Administrator

Let's look at an improved strategy for the Raise-2 vs Raise-4 decision when your longest and strongest straight is a QJ9. The default WOO strategy is to Raise-4 with a QJT, but once again I calculate that it depends upon the kickers.

The main idea is that the presence of cards with ranks 2-8,10 and Ace all reduce the probability of dealer getting a 3-card straight hand in the range 32A-JT9 - which are the straights that your QJT hand can beat. Thus, you will tend towards choosing Raise-2 when these lower straights become significantly less likely.
So many better men, a few of them friends, are dead. And a thousand thousand slimy things live on, and so do I.
gordonm888
Administrator

Playing hands with no straights (longer than 2 cards)
Below I am presenting the frequency of 7 card hands in which the longest straight is n cards and n varies from 1 to 7. I think this is a novel calculation, in any case I personally have never seen the one-card straight value published.

Why are 1-card straights relevant to this conversation? Well, because 1-card straight hands are virtually the only hands which have some chance of causing the dealer’s DNQ probability to rise above 0.5 and thus shift the optimal strategy decision from FOLD to Raise-2. Whenever you have a hand whose longest straight is two cards, you should automatically fold (two minor exceptions, below). But when you are dealt a hand with no adjacent ranks in it, you should stop and at least consider whether it should be Raised with a 2-unit bet.

In a previous post, I said that 10-10-10-10-5-5-5 and 5-5-5-5-10-10-10 were the only two hands (with no straights longer than 2 cards) that blocked enough dealer straights that they should be Raised rather than folded. I was thoroughly wrong, as I have come to realize. There are many 1-card straight hands that should be Raised. It is an interesting subject.

For hands with no adjacent ranks, i.e., whose longest straight is exactly 1 card in length, you should generally fold. However, there are exceptions:

2. Raise-2 with any hand that has Quads of one rank and 3-of-a-kind of another rank if both ranks are in the range 3-Q and there are at least two gaps between the ranks.

3. Raise-2 with any hand that has quads of one rank, a pair of a 2nd rank and a singleton in a third rank that meets the following conditions:
___a. All cards are in the range 3-Q
___b. The quads and pair are separated in rank by exactly 2 gaps
___c. The rank of the singleton is not adjacent to the ranks of either the quads or pair. (remember, this must be a 1-card straight hand, which means no adjacent ranks.)

1. This strategy is probably not perfect, as there are probably a few “no-straight” hands that I have missed with an EV just a tad lower than (-1.0). Still I think this has scooped up most of the EV that one can achieve by Raising hands with no 3-card or longer straights.

2. These rules may seem complicated, but they make a certain kind of sense. For example, the ranks 2,K and A are usually excluded from most of these rules because these ranks are relatively inefficient at blocking 3 -card straights and even less efficient (relative to other ranks) at blocking 4-card and longer straights.

3. Regarding the first rule for exceptions, hands where all 7 cards are either a 3,6,9, or Q: I have calculated that this category of hands occurs with a frequency of 0.0000789 and collectively will lower the house edge by 0.00000458 or 0.000458%. So, this exception, and all the others, I presume, have a negligibly small impact on the bottom line. But some of us are obsessive about striving for every increment of expected value that we can get. And I think its of value that some poor wretch somewhere has evaluated a more rigorous strategy. If for no other reason that to assure ourselves that we are not missing something. Because . . .

4. As a matter of fact, we have indeed missed something. Something entirely new, I think, and of possible significance. You see, I stumbled onto something and haven’t really mentioned it yet. I’ll plan to discuss it in my next post - while being mindful of the limits being placed on us by the forum rules.
So many better men, a few of them friends, are dead. And a thousand thousand slimy things live on, and so do I.
gordonm888
Administrator

I promised one more strategy post and it is on collusion, and most specifically on this

In this game the player will be folding his hand almost 50% of the time. Clearly if you knew that the dealer had little to no chance of qualifying, you would at least Raise-2 on every hand and take the +1 unit payout from the Ante Wager when dealer has a DNQ.

So what if an AP team filled the 5 seats and simply counted the number of 3s, 6s, 9s and Qs in their hands, and signaled the information, and acted accordingly? After all, 5 players have 35 cards in their hand.

In the table below, I show some results for those occasions when the five players have 13 to 16 of the 369Q cards in their hands. The first column is the number of those 369Q cards that they count in their hands, the 2nd column is the frequency with which that will happen. The 3rd and 4th column are my estimated average values of DNQ and EV that they can achieve and the last column is probability*ΔEV or the reduction in the House Edge achievable for that specific count..

Well, this is not a viable collusion method. If you have exactly 13 cards in the 369Q quartet, it appears that the DNQ is about 0.49 and with DNQ<0.5 the players have no basis for gaining an advantage by Raising every hand. And by raising every hand when you have 14, 15 or 16 cards I estimate that you can only lower the HE by a total of 0.7% (the sum of the last column). The values of DNQ and EV in my table are not exact but they should be in the ballpark; however, the values of probability should be exact -and it is these low probabilities of occurrence that make this an unattractive method for collusion. And no 5-man team is going to count cards to lower the HE from 2.8% to 2.1%.

I did some quick calculations for 6 players and 42 cards -and that is a different story. The game might indeed be vulnerable to collusion by this method with 42 cards to work with. That is probably why there are only 5 seats at the KISSC table.
Last edited by: gordonm888 on Jun 12, 2022
So many better men, a few of them friends, are dead. And a thousand thousand slimy things live on, and so do I.
RSS Feed