lilredrooster
Joined: May 8, 2015
there is a fascinating scientific concept of "entanglement". fascinating, but not easy to understand. basically, i think the theory is that due to entanglement some things that we think of as being random are actually not random. from the article:

"Entanglement is what Einstein referred to as “spooky action at a distance.” It’s a phenomenon by which one particle can effectively “know” something about another particle instantaneously, even if those two particles are separated by a great distance"

the author of this article might be stretching with this one, but nonetheless here it is:

"Particles can’t be alive or dead, so instead think heads and tails. If you flip a coin 100 times, odds are it will come up heads close to 50 times and tails close to 50 times. If I then flip my own coin 100 times, there’s a high probability the split will also be close to 50/50. But if our coins are entangled, then the outcome of your flip determines the outcome of my flip — perhaps our entanglement is such that every time you flip heads I flip tails. If we flip our coins enough times, our entanglement will begin to become obvious, because my outcome of my flip is no longer random, but determined by your flip, and the odds of my flipping tails every time you flip heads get lower and lower the more we flip."

And please, I AM NOT IN ANY WAY SUGGESTING THAT THIS IDEA CAN GIVE YOU ANY KIND OF EDGE IN GAMBLING.
but to me, it is a fascinating article and makes me wish i was a lot smarter than i am to be able to get deeper into it.

Thanks Mike, I note your rebuke. I also acknowledge that the OP has been polite. I make no observation about his honesty or intent.
I unreservedly apologise for any offence caused to anyone by my post.
The OP remains blocked from my view and now I'm going to also block this thread. In fact, I'm going to self exclude from posting here for a week. Thank you OP.

Although you won't read this, I'd like to say you're very much the gentlemen. Enjoy your week off.
It's not whether you win or lose; it's whether or not you had a good bet.
Wizard
Administrator 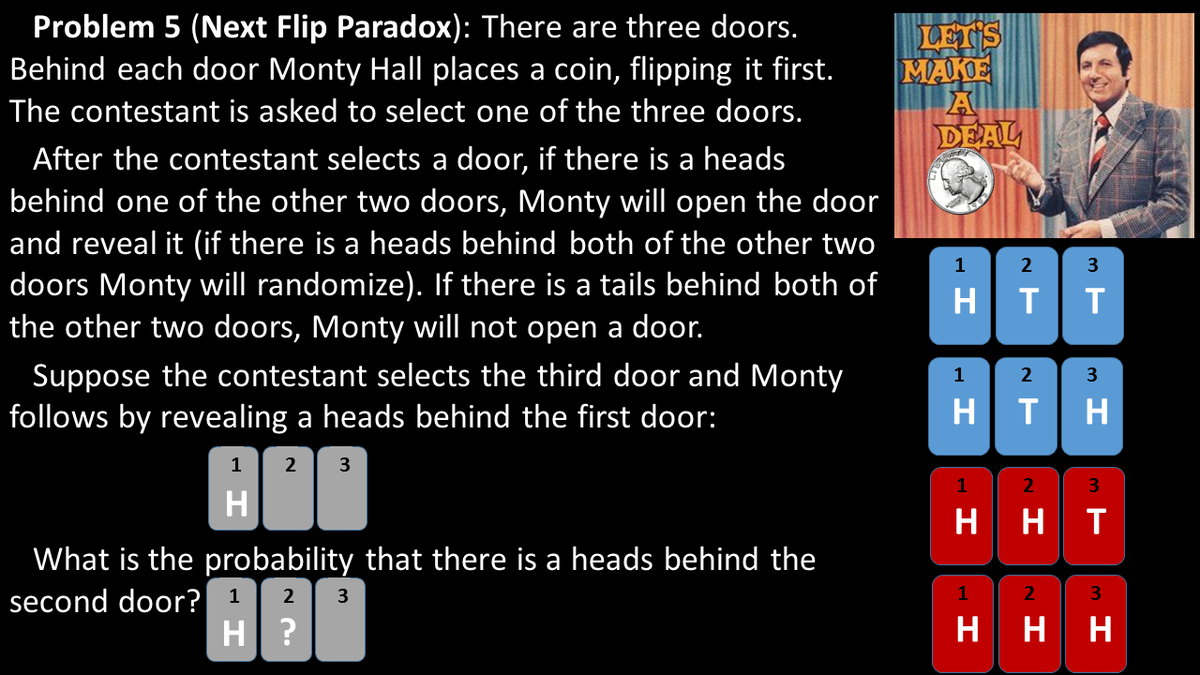 The answer is 1/3.
It's not whether you win or lose; it's whether or not you had a good bet.
QFIT

there is a fascinating scientific concept of "entanglement".

Quantum entanglement (Verschränkung) deals with sub-atomic particles. It can also work across light years of distance. In no way would it relate to cards.

OK, who's going to bring up Schrödinger's cat?
"It is impossible to begin to learn that which one thinks one already knows." -Epictetus
lilredrooster

Quantum entanglement (Verschränkung) deals with sub-atomic particles. It can also work across light years of distance. In no way would it relate to cards.

...OK, who's going to bring up Schrödinger's cat?

That cat's been in that box for over 100 years. Let's just all agree the damn thing is dead already... =P
Playing it correctly means you've already won.
bazooooka

Same rules/setup again as posed in the image and the contestant pick door 3 again: But suppose a case where "door 1" or "door 2" or "both" can have a head. If "both" Monty will randomly open one of the two. We can't see which one but we know that he has done so thus signaling there is at least 1 head within the first two doors.

*This restriction provides info similar to the other heads followed by heads coin examples earlier in this thread.*
**"Finite" sequences have dynamic odds as events/doors/flips etc unfold and intuition doesn't usually help most**

Questions (for anyone):
How many door sequences now exist with the info that for sure either door 1, or door 2, or both, have a head?
What's the odds of seeing another head if we open the next door to the right of whatever door Monty opened (either door 2 or 3)?

bazooooka
Joined: Nov 21, 2016
What's the odds of seeing another head, If we open the next door (to the right)?


The insight from this question is why the finite sequence sampled in the coin tosses earlier in this thread end up being less than 50%.


"""Same rules/setup again as posed in the image and the contestant pick door 3 again: But suppose a case where "door 1" or "door 2" or "both" can have a head. If "both" Monty will randomly open one of the two. We can't see which one but we know that he has done so thus signaling there is at least 1 head within the first two doors."""

FYI: To figure this out layout all the possible door outcomes visually and you will see it's less than 50% once we are restricted to the knowledge that Monty only opens doors if they have a head. We know he has done so but we don't know if it is door 1 or door 2.
mamat

Casinos go through extraordinary effort to ensure randomness. Failure to do so would cost them dearly. Humans looking for patterns will nearly always find patterns that don't exist.

Some scientific studies were seriously flawed because of poor PRNGs.

Recently one casino host told me about a mis-set slot machine where a pair of people made six figures in one day before the problem was spotted.
I've heard of other mis-set slot machines which have cost the VP Slots his job...because of six-figure losses.

------
It doesn't matter that "casinos go through extraordinary effort to ensure randomness", it's that players may need to protect themselves.

Most "must-hit" progressive slot machines in the past decade have had a uniform distribution of progressive drop points (e.g. a $50 progressive starting at $25 has an equal chance of dropping anywhere between 25 and 50).

However, CJ has released very popular progressives which are programmed to fall very close to the must-hit point (maybe 92-96% towards the top).

So in this case, it's not a question of "random", but "WHICH KIND oF RANDOM"?
e.g. what is the distribution?

-----
https://en.wikipedia.org/wiki/Statistical_randomness
A numeric sequence is said to be statistical random when it contains no recognizable patterns or regularities; sequences such as the results of an ideal dice roll, or the digits of π exhibit statistical randomness.

Global randomness and local randomness are different. Most philosophical conceptions of randomness are global—because they are based on the idea that "in the long run" a sequence looks truly random, even if certain sub-sequences would not look random. In a "truly" random sequence of numbers of sufficient length, for example, it is probable there would be long sequences of nothing but repeating numbers, though on the whole the sequence might be random.

Local randomness refers to the idea that there can be minimum sequence lengths in which random distributions are approximated. Long stretches of the same numbers, even those generated by "truly" random processes, would diminish the "local randomness" of a sample (it might only be locally random for sequences of 10,000 numbers; taking sequences of less than 1,000 might not appear random at all, for example).

Over the history of random number generation, many sources of numbers thought to appear "random" under testing have later been discovered to be very non-random when subjected to certain types of tests. The notion of quasi-random numbers was developed to circumvent some of these problems, though pseudorandom number generators are still extensively used in many applications (even ones known to be extremely "non-random"), as they are "good enough" for most applications.

The use of an ill-conceived random number generator can put the validity of an experiment in doubt by violating statistical assumptions. Though there are commonly used statistical testing techniques such as NIST standards, Yongge Wang showed that NIST standards are not sufficient. Furthermore, Yongge Wang [4] designed statistical–distance–based and law–of–the–iterated–logarithm–based testing techniques. Using this technique, Yongge Wang and Tony Nicol [5] detected the weakness in commonly used pseudorandom generators such as the well known Debian version of OpenSSL pseudorandom generator which was fixed in 2008.
QFIT

QFIT
Joined: Feb 12, 2010
Oh, casinos have made many payoff errors. Even Keno games have been beatable. PRNGs are another matter. I am well aware of the problems of poor RNGs. One BJ simulator (no longer sold) gives the same results for 20 million rounds and hundreds of millions. Clearly the RNG degraded, if it was any good at all. The early Excel RNG degraded after 20,000 numbers. And yes, I am aware of Marsaglia's Diehard Tests. I use his MarZam II. As Marsaglia once said (after finding patterns that only appeared when plotting in three dimensions and rotating the plots): "Random numbers fall mainly in the planes".
Last edited by: QFIT on Jun 22, 2017
"It is impossible to begin to learn that which one thinks one already knows." -Epictetus
RSS Feed