"There are three kinds of lies: lies, damned lies, and statistics." --Benjamin Disraeli

One must be extremely careful when presenting stats as misapplication of statistical theory can result in absurdity.

Oh no, not at all! Say it isn't so; I'm crushed! Surely, pure stats must reveal nothing but absolute truth without regard for any fundamentals inherent in what is being measured:

US spending on science, space, and technology
--correlates with--
Suicides by hanging, strangulation and suffocation

"I'm against stuff like crack and math" --AxelWolf
QFIT

Well, everyone knows that one is a valid correlation.
"It is impossible to begin to learn that which one thinks one already knows." -Epictetus
bazooooka

Using a decision tree or similar. There are only 14 times (of the 16 potential "4" flip outcomes) that one or more heads can occur in first 3 spots in any 4 flip sequence. Thus we disregard TTTT and TTTH. Agreed?

In the remaining 14 scenarios that are eligible to have a head following a head only approx 40% do so.

***For this particular example*** Thus a head = 50% is not true statement once we measure all instances that meet the qualifier of how often does a "head follow a head when one or more of the first 3 flips is a head".

It's the taking of TTTT and TTTH out the equation is why we end up with a shortfall of measurable tails.

**Anyhow the only good of this type of insight (it seems) is that the researchers found that those who could hit free throws near their typical ft% even after several makes in a row actually are showing evidence of a hot hand; just like 50% heads isn't expected under the above coin flip restriction, but if found (it wasn't) it'd defy probable expectation
Last edited by: bazooooka on Jun 14, 2017
RS

Look at the bottom of this image: 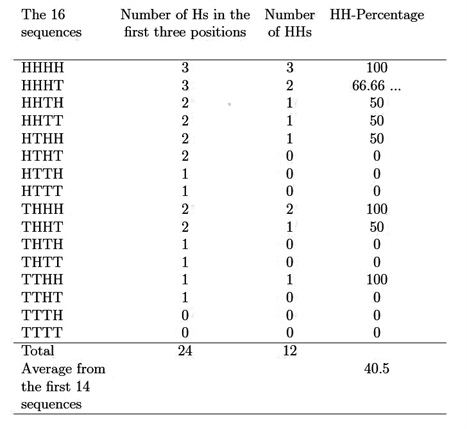 The chart shows that the "head after heads" unweighted average after a "conditional sequence" (ie when one or more head occurs in the first 3 positions) is approx. 40.5% (hence the number in the "HH percentage "column).

Maybe read the original article and the academic paper https://papers.ssrn.com/sol3/papers.cfm?abstract_id=2627354 that started all this.

Or the other links the article contained in this thread.

And yes, of course, we all agree a fair coin is 50/50 for any random flip. That was never in dispute.

***I'm here more to learn than teach that's for sure. I, and apparently others on the Internet, think this is interesting. I have no motives other than discourse.

""
We prove that a subtle but substantial bias exists in a standard measure of the conditional dependence of present outcomes on streaks of past outcomes in sequential data. The magnitude of this novel form of selection bias generally decreases as the sequence gets longer, but increases in streak length, and remains substantial for a range of sequence lengths often used in empirical work. The bias has important implications for the literature that investigates incorrect beliefs in sequential decision making---most notably the Hot Hand Fallacy and the Gambler's Fallacy. Upon correcting for the bias, the conclusions of prominent studies in the hot hand fallacy literature are reversed..."
Last edited by: bazooooka on Jun 14, 2017
RS

bazooooka
Joined: Nov 21, 2016
This thread has attempted to explain the 40% but I'm sure someone can/will/should explain it much better (heck, that's why I first posted/asked originally).

Here is an online argument I've found between a hedge fund guy and a stats prof. over these exact issues. http://andrewgelman.com/2016/02/18/miller-and-sanjurjo-share-5-tips-on-how-to-hit-the-zeitgeist-jackpot/


And here is the chart again below for those who want to interpret/explain further (maybe not needed).

RS
Joined: Feb 11, 2014
It has "HHHH" as having 4 H's. For the purpose of this, the last H cannot be counted, as there aren't any flips afterwards.
bazooooka

The .40 is the approx 40.5% probability after all the qualifying events were assessed.
OnceDear
Administrator

I think there's a simple one syllable word for what's been going on here, not with all that much subtlety and pretty much up in flashing neon lights, and not just in this thread... but I don't think I'm allowed to say it.

I think the word you refer to is 'Troll'

I know forum rule one forbids 'All personal insults' and I've seen cases where the accusation 'Troll' has been deemed to be such a personal insult. I don't agree with that implied extension to the rule, but hey, I don't set the rules or their interpretation.

Every link, chart, table and bit of narrative that I've seen from the OP has been absurdly wrong and unsupportable. He refuses to desist in posting abject stupidity.

So, I'm going to block the OP, so as to no longer see his posts.

I also block Trolls..
Take care out there. Spare a thought for the newly poor who were happy in their world just a few days ago, but whose whole way of life just collapsed..
RSS Feed