Wizard
Joined: Oct 14, 2009
It seems to me that 88 Fortunes may be a vulturable slot machine. You see it and other similar Asian baby slot machines all over the place in Vegas.

For purposes of discussion, may I direct your attention to the bowl of coins at the top center of the following image. 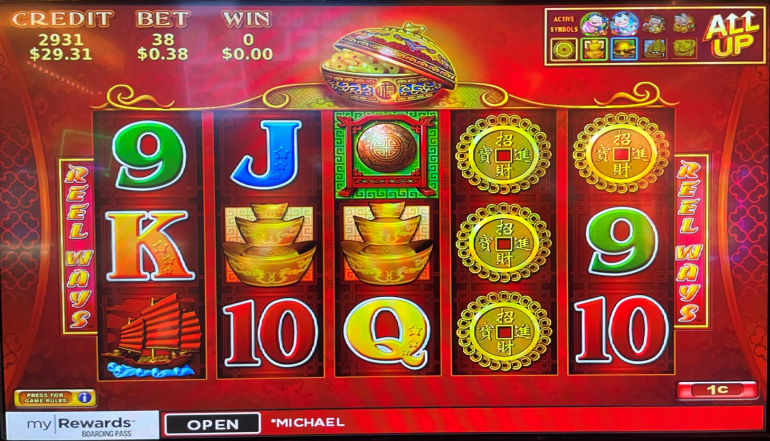 This bowl does not always have the same number of coins. Whenever the player gets a wild, some coins get added to it. As they accumulate, you can see more coins in the bowl and the lid rises.

Next, note the progressive jackpots on the upper screen in the following image. 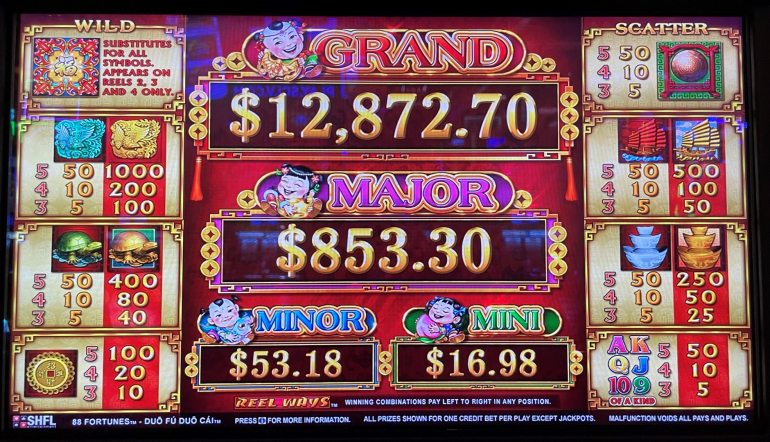 The player may play 8, 18, 38, 68, or 88 credits. This is a 243 ways to win game, regardless of the bet size. The main incentive to betting more is the pay table gets bumped up for certain high paying symbols. However, it also makes you eligible for for the larger jackpots.

Let's get back to the bowl of coins. If the player gets a wild symbol, not only does it add coins to the bowl, but it might trigger the Fu Bat bonus. Note the rules say when a (wild) symbol appears the player MAY be awarded an available jackpot. Next, refer to the following rule screen. 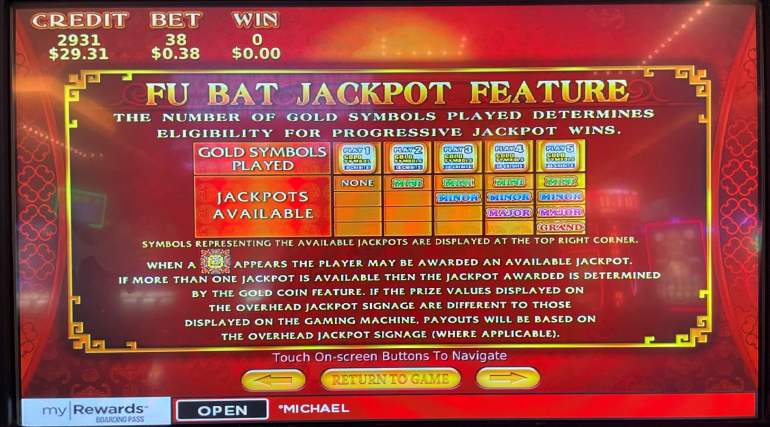 If the player bets 18 credit, he can't win anything.

If the player bets 38 credits, then I assume he automatically wins the Mini jackpot.

I was just playing this morning, at 38 credits, and hit the bonus. The only symbols I saw were Mini and Minor, winning the Mini.

At this point, please correct anything I have in error.

My main question is about the relationship between the coin bowl and probability of triggering the Fu Bat bonus. My best guess is the more the coins, the greater the chance. However, it could be that it hits automatically when there are so-many coins in the bowl and never hits until then. What do the players of 88 Fortunes know?

As mentioned before, there are lots of similar looking Asian baby games and they all seem to have this bowl of coins feature, so I'm interested in your answer even if not based exactly on this game.

That's enough for now. Thank you.

The question for the poll is do you play 88 Fortunes?
“Extraordinary claims require extraordinary evidence.” -- Carl Sagan
ChumpChange

ChumpChange
Joined: Jun 15, 2018
From your description, if you don't care for winning the Grand Prize, you can bet 68 coins and try for a Major Top Prize.
DJTeddyBear

DJTeddyBear
Joined: Nov 2, 2009
I voted for you to not ruin it. But if you did let the cat out of the bag, A) too late, it may already be ruined, and B) I still wouldn’t play it.

My experience with these Asian games is they are not vulturable.

Imo, the outcome of your choices are predetermined the moment you spin the button and a bonus round is determined. It's all for show.

The same goes for the coins collection in the center. I have seen it hit quickly and also seen a completely full cup refuse to hit.

Imo, it's just eye candy animation to think you have a chance. However it hits like any other win on the slot.
For Whom the bus tolls; The bus tolls for thee
mtcards

mtcards
Joined: Mar 14, 2016
On some of the asian machines I have seen with the firecrackers that pop when you hit the designated symbol, there is a disclaimer that states there is no relation to the bonus being triggered and the number of fireworks left. I seem to recall a similar disclaimer on one of the machines that have the coin bowls on it regarding there being no relation to the number of coins in the bowl to when the bonus is triggered.
Dieter
Administrator

The question for the poll is do you play 88 Fortunes?
link to original post

No, I prefer other bad plays.

I would describe it as a match 3 pick; what the prize symbols are hiding behind (doors, coins, balloons, walnut shells, spooky ghosts, pumpkins, pearls, ears of corn...) would seem to make little difference.
Anecdotal wisdom suggests it may be impossible to pick a third symbol that does not match the award prize determined by the game initiating reel spin, but have fun poking at the screen and cheering.
May the cards fall in your favor.
ChumpChange

I was thinking after I wrote the post that the 12 coin bonus thing must be gaffed. If the player bet the full 88 coins, he should hit the Grand progresive1/4 of the time. The size of the jackpot to the bet is just too high.

Besides the 18 to 88 credits bet, the player also has a choice of denomination. Do the jackpots change when the player changes the denomination? If not, I assume the player plays the Fut Bat bonus more often with a larger denom. Comments?
“Extraordinary claims require extraordinary evidence.” -- Carl Sagan
ChumpChange

I can't imagine this would go higher to the $1 denomination in the high limit room with a Grand Jackpot of $1 million.

What are the break-even points on jackpots that you would play?
Dieter
Administrator

What are the break-even points on jackpots that you would play?
link to original post

That question gets an option 9 vote.
May the cards fall in your favor.
RSS Feed