I call bulls*it, there is no way this fishy is a winning player! Mods isn’t there a rule against blatant lies? Can we get at least a 3 day suspension for this “Romes” character if that even is his real name!
You can shear a sheep a hundred times, but you can skin it only once. — Amarillo Slim Preston
Zcore13

Not to say you're not being truthful, as I'm sure you are (being very careful my posts don't offend anyone), but I've never met anyone, other than myself, who claims to be a lifetime loser in raked poker.

A $5 rake is nothing in a medium to high spread game or No Limit game.

ZCore13
I am an employee of a Casino. Former Table Games Director,, current Pit Supervisor. All the personal opinions I post are my own and do not represent the opinions of the Casino or Tribe that I work for.
IcheckraiseU

We all know the players never win since the rake, dealers and waitress never lose.

I got the joke even if everyone else took it very serious! This might of been a bad attempt at humor but I get it.

Not to say you're not being truthful, as I'm sure you are (being very careful my posts don't offend anyone), but I've never met anyone, other than myself, who claims to be a lifetime loser in raked poker.

I agree with you when it comes to Live Tables. I never heard anyone claim they are a losing player overall. Since internet poker and tracking it is clear that many players are winning and winning millions. I would think that for every true winning player you will have thousands in the red.

That's not true. I'm positive playing poker over my lifetime. It's not like playing against the house in other games.

In my mind it is clear that Apples was making some attempt at humor. I think he was saying that the players in general have no chance with all the money that is raked. I would think he knows that some players win in the game "lifetime" but he might of been trying to explain that it is very difficult?

I agree that it isn't exactly the same and can be worse since the house wins on almost every single hand. In those games where they rake up front it gets really ugly. In the old days the "Snatch Games" were fun. I am sure you could beat those as well?
CrownMGD

CrownMGD
Joined: Dec 15, 2017
Who is responsible for every dollar raked to these Mega Jackpots? These are the Jackpots that are property wide? Does this mean that every Stations Casino in Vegas collects the Rake for this Mega Jackpot? I have heard players and employees tell stories of arrests being made in Poker Rooms because of misappropriation of funds. Has Stations Casino Poker Rooms every been guilty of such? I heard a story long ago about Managers doing something illegal with drawings and car give aways. The story was that the drawing was rigged and the players who won the car or cars already knew they would be called. Is this true and do these things still happen these days with all the protection?
TomG

TomG
Joined: Sep 26, 2010
The "Rules are rules" argument doesn't hold much weight. If Stations never or rarely enforces this rule in any other situation, that would mean it is only in place for them to withhold paying
BTLWI

[Un?]fortunately machines have given a higher hourly this year so I've only put in 700 hours of poker in 2017. Horizontal axis is session count. 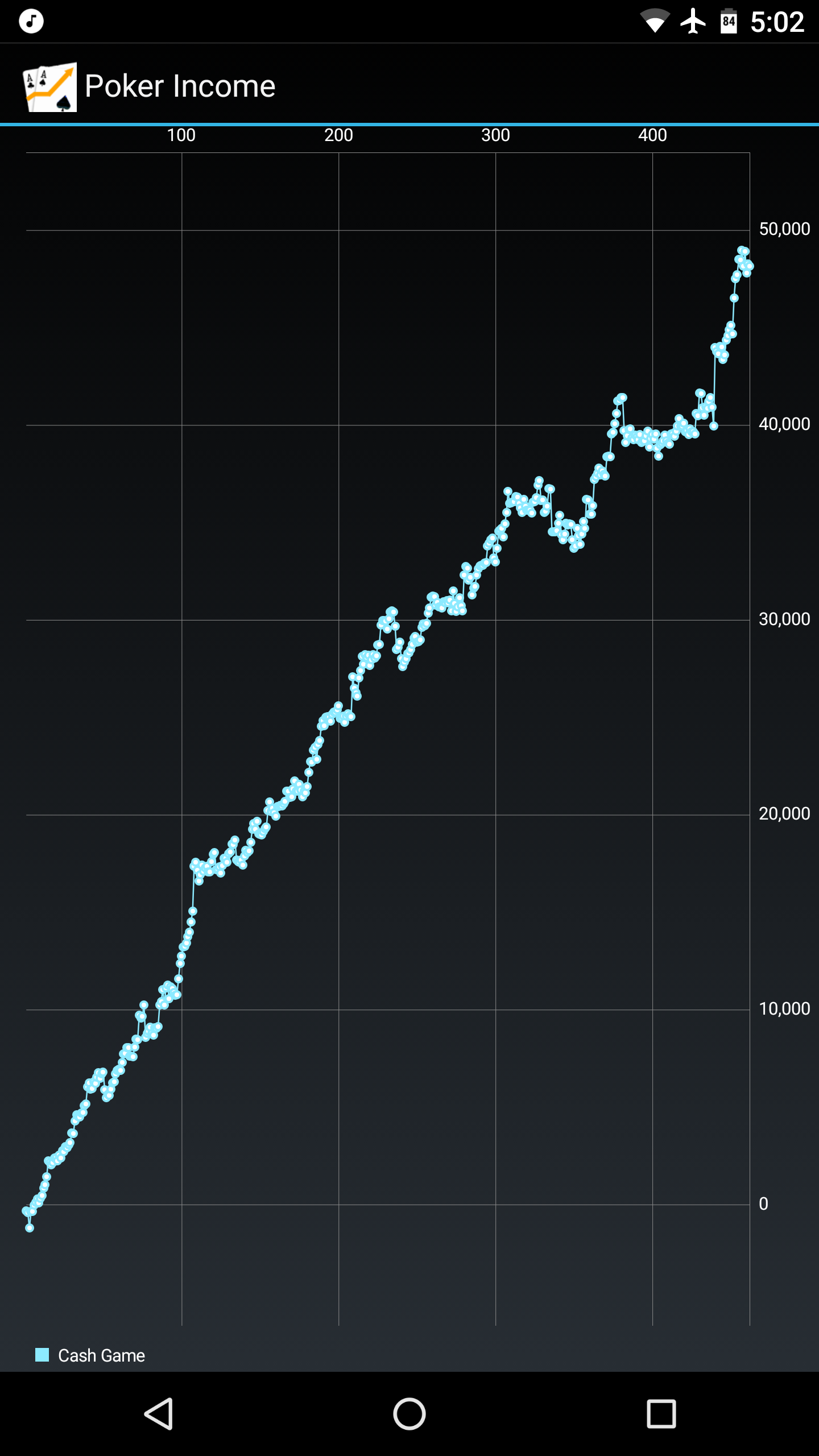 The logic behind not allowing communication is simple. You could extrapolate it to an entire table where all players turn their hands face up preflop and only continue to a flop if 2+ coordinated BBJ hands are available. That is communication that clearly influences action.

If casinos really wanted mega BBJ they would just make the qualifier TTTT beaten and never reduce that.
FleaStiff

Can you post the charts for your fellow players who provided all that money to you?
Rigondeaux

Rigondeaux
Joined: Aug 18, 2014
No idea who that guy is or if that's real. Could just be running insanely good. It happens.

But the Wizard's point stands. Most poker players (and sports players) seem to wildly overestimate their winnings. Even if they track them, they still seem to find ways. Losing players are extremely hard to find. Some break even. Some are small winners. Some are winning 3 buy ins every single night. Hard to say where it all comes from.

I always think of this guy who does some training videos and they are good videos and seems like a nice guy. But he says he makes $120/hr or something like that.

Then he digresses about the process of buying his first home, in his mid thirties. Doesn't dress nice, in fact claims to be frugal. doesn't seem the type to have a massive cocaine habit or something.

Bud, what happened to the quarter mil a year you have been making in cash all this time? Guy must have an awesome collection of garbage pail kids.
Hunterhill

Hunterhill
Joined: Aug 1, 2011
I agree with some of this,but judging by the way someone dresses doesn't cut it.
I know multiple Ap's with 7 figure bankrolls but they dress like bums.
The mountain is tall but grass grows on top of the mountain.
Rigondeaux

I agree with some of this,but judging by the way someone dresses doesn't cut it.
I know multiple Ap's with 7 figure bankrolls but they dress like bums.

Yeah I know. Clothes/flashy lifestyle are just one thing he isn't spending on. It's possible the guy has a safe with over a million in cash somewhere and would rather keep it there than use it to buy real estate. Or he lost a ton in stocks or something, without ever making the most obvious investment of buying a home. Lots of possibilities. But he is a relatively normal guy, talkign about buying what sounds like a normal house for the first time with his fiance and says he has been making over a $100/hr in cash throughout his 20s and 30s.

Most likely answer is, he hasn't really made that much. He decided that those really bad downswings didn't count because he wasn't on his game, or whatever. He actually makes $120/hr on Friday and Sat night, when playing well, etc.

Was just perusing twoplustwo where a guy, who had some good pointers to give, claimed he was making 16bb/hr at 1/3. If he underreports that on his taxes, that's a de facto six figure income. Assuming he is not some uniquely gifted genius, it's pretty odd that there aren't a lot of other intelligent people quitting their jobs to go make six figures at 1/3. Or, say, adjuct math professors picking up a mere $35k a year or whatever on the side.

Heard it all for years.

Most of the time, it just doesn't add up, for various reasons. Lifestyle is one of them. This guy Limon, who was on GWAE a couple times, put it pretty well when some online pros claimed they were making like $400/hr at Commerce. "Cool! So, can I see your yacht?"

Of course, some people really do make good money playing poker. I totally believe that Phil Galfand and guys like that have become multi-millionaires just from poker. But I think it's more often exaggerated (also, cases of survivorship bias), from losers thinking they are break even, to guys who make $50/hr thinking they make $120/hr and all the way to the top.
RSS Feed