billryan
Joined: Nov 2, 2009
In the mid-90s, I had a day bartender who started playing chess while behind the bar. Word got around and before we knew it, he would play six or seven games at the same time and business picked up as people came to see it. He said he never played in tournaments but he was one of the best players I ever saw. He had an uncanny ability to trap people into doing his bidding for him. The game would develop and he would seemingly make a mistake but what he was really doing was making his opponent react to him rather than have a strategy of his own. Even knowing this, he'd still suck people into his traps. It was actually fun to watch.
I enjoy playing chess but it's hard to find people who play at my level. I'm good enough to destroy most casual players but not talented enough to play anyone at the top levels, so I mostly play computers and it's just not the same as watching your opponent slowly realize he is outclassed and outgunned.
The difference between fiction and reality is that fiction is supposed to make sense.
EdCollins

...Nonetheless googling it shows there are grandmasters who can do this, and I can hardly claim they are all cheats.

Lots of players, hundreds of thousands of players, can play blindfolded. Heck, I myself was able to play a single game blindfolded when I was younger. It's not hard at all. Even now, I could play a dozen moves or so, without sight of the board. However, after that, at my age, the picture in my head becomes "muddled" a bit... and is not clear anymore. I lose track of where some of the pieces are.

However, I was never able to play many games blindfolded, at the same time, like many players can do.

But it's definitely not a "scam." George Koltanowski was popular for his ability to do it. He often took on 30 or more opponents, playing them simultaneously, blindfolded. (Before he passed away I was fortunate enough to watch one of his Blindfold Knight Tour demonstrations at a tournament in Vegas.)

Back when I lived in Arizona I played against a local master at a club, who took on me and two other club members, and played each of us simultaneously, blindfolded. (He won all three games.)

And yes Timur Gareyev is very, very good at it, as is Marc Lang. Of the modern day players, Vladimir Kramnik, Viswanathan Anand, Alexei Shirov and Alexander Morozevich have proven themselves to be particularly strong at blindfold chess.
Last edited by: EdCollins on Nov 22, 2020
Wizard
Administrator

Chess is dangerous,
you waste a lot of time doing nothing.
Chess doesn't make your life better,
it wastes your life. Better to turn the
obsession energy into something
useful.

All things considered, I think chess is a wonderful game. However, like anything, people can overdo it. I have known people who I would say had an unhealthy addiction to chess, where they found it difficult to not play.

At times, I have gone through chess phases where I would play a chess computer much of my spare time. However, after a few months of this and seeing little improvement I quit cold turkey to turn my attention back to real life. It has been a while since my last chess phase and think another one may be coming on soon.
It's not whether you win or lose; it's whether or not you had a good bet.
EdCollins

...I enjoy playing chess but it's hard to find people who play at my level.

You could play online. No matter what your level is, there are an endless number of players who also play at your level. After a short number of games you'll be given a rating and then after that you can play against players with a similar rating.
EdCollins

It has been a while since my last chess phase and think another one may be coming on soon.

My last tournament was the U.S. Open five full years ago, back when the city of Phoenix hosted it.

I used to LOVE playing in chess tournaments. I'd play in six or seven major tournaments each year. As soon as one tournament ended, I started planning for the next one, and couldn't wait for that next tourney to begin. As soon as one tourney ended, I couldn't wait to get home and analyze all of the games just played with an engine, to find out what I did right, what I did wrong, and what I could have done differently, throughout each game.

I loved seeing all of my chess buddies, and hanging out with them in between rounds. I loved the free lectures the major tournaments offered, and watching the grandmasters and their simuls. I loved studying each day and watching my rating slowly increase.

Alas, I took a break from all of it. Not sure why. Someday, probably in a few years when I retire, I hope to do all of this again. I've played in more than 70 tournaments in my life and loved every one of them. I hope to capture that fun and magic again.
EdCollins 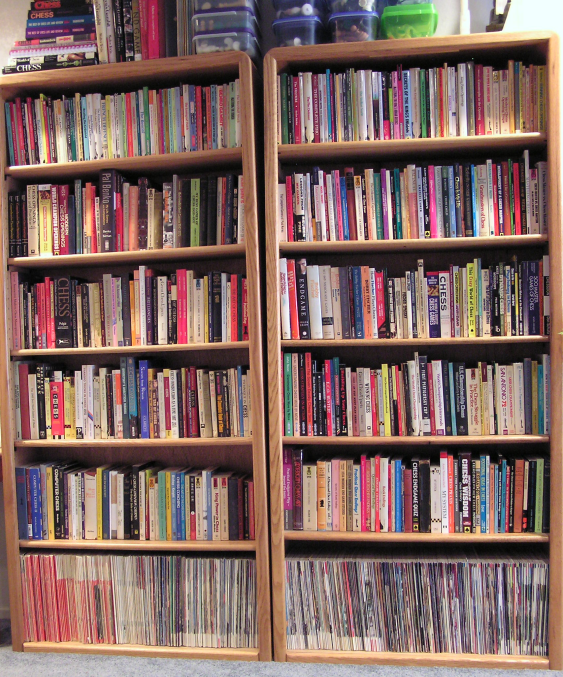 What should someone who only knows how the pieces move read first?
EdCollins

What should someone who only knows how the pieces move read first?

From my collection I wouldn't have a whole lot of books to recommend, because most of mine would be above your level. However, I see a few I'd recommend immediately.


Basically, any basic beginners book that teaches general overall strategy would be fine for a start.
RSS Feed