You're welcome. I certainly bet more as the odds bet better. Roughly, in proportion to my advantage.

Can I ask how you went about figuring out the fair odds for the game not being tied after 0-0?
Mission146

This has been a lousy year for prop hunting for me. William Hill had some juicy bets, but the lines had all moved against me by the time I saw them. A few still had value. The following bets are all I have made so far:

I'm sure there are other things I could bet, but I haven't been out much this year looking.

In general, Kansas City (and Coach Andy Reid) is extremely aggressive when it comes to going for it on fourth down, particularly early in the game. Conversely, from the three year period encompassing the 2016-2018 seasons:

This season was a little different with San Francisco going for it on 4th 12 times compared to 10 for Kansas City.

However, we have to look at the fourth down situations:

(That one is interesting not because they gave up a reasonable field goal chance, but because it would have put IND in position to get in FG range with just one first down had the conversion failed)

(This DID set the Colts up for a Field Goal, which was a highly questionable choice, because IND was up 16-10 at the time this play was called, so most coaches would have hoped to punt here and get the ball back)

(This was one where KC could have just taken a chip shot field goal, and it would have made sense score wise as they were up 10-6 at the time of this play. While the conversion was successful, they did end up taking a field goal rather than go for it on 4th and Goal, perhaps because Mahomes got injured on this play)

(In a tie ball game, KC would forego a chip shot field goal to go for it on fourth down. Once again, they ended up taking a FG on the drive anyway)

(Ahead 20-7, Kansas City makes the bizarre decision not to attempt a field goal here and instead goes for it. They would take a field goal later in the drive)

(San Francisco was ahead 14-3, so either decision kind of makes sense)

SF @ Arizona: Conversion Successful, 4th and GOAL on the 1 with second left in the second quarter

(Ahead 14-7 already, you can make an argument for either)

Any other 4th Down plays not listed were not listed for one of the following reasons:

1.) Less than four minutes to go in game.

2.) "No Man's Land," play, not really a reasonable likely field goal, but too far in opponent's territory to really consider punting.

3.) Botched snap/hold/fumble on FG attempt. (Counts as turnover on downs)

In conclusion, Andy Reid has a history of being super aggressive on fourth downs and we saw it also this year as he took a pass on three chip shot field goals and also went for it on 4th (deliberately) deep in their own territory. Even SF's most aggressive 4th Down play calls (with one exception) at least make sense on some level. Andy Reid just likes to try to surprise and he trusts his offense.

On the other hand, Kansas City is 34/38 on FG attempts compared to 30/39 for SF. Still, it remains so that Andy Reid is not one inclined to, "Take the points."

Anyway, I don't think it's a bad bet, but I wouldn't put the fair odds at exactly 100 given Andy Reid's history of passing on chip shots.
Vultures can't be choosers.
Wizard
Administrator

Anyway, I don't think it's a bad bet, but I wouldn't put the fair odds at exactly 100 given Andy Reid's history of passing on chip shots.

Those are very good comments and I didn't analyze it nearly to that degree. That's why I don't do player props or get into the behavior of a particular team. I am just a numbers man. I figure in the NFL teams are smart enough to know when the odds favor attempting a field goal and attempting a fourth down. Then again, I am always screaming at the TV when teams don't go for it on 4 & short early in the game. If KC will lean towards going for the 4th down, I respect that, and it should have factored into my calculus.

I think for a while my signature line here was "When in doubt, go for the fourth down."
It's not whether you win or lose; it's whether or not you had a good bet.
7craps

I am just a numbers man. 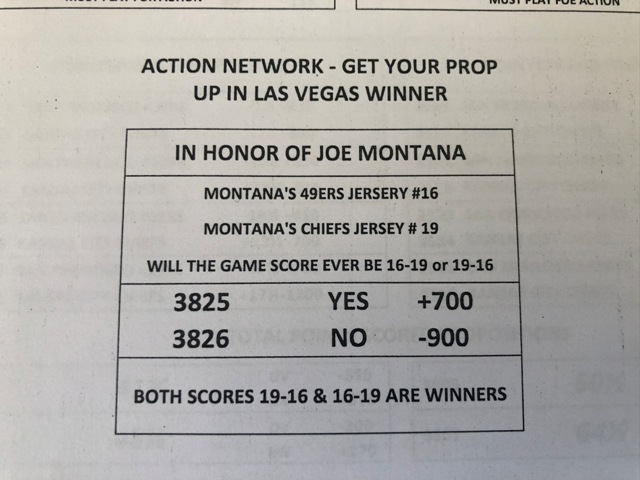 Here is an interesting prop at Boyd casinos:

Wow. How often has any team even had 16? It’s not a common score
Simplicity is the ultimate sophistication - Leonardo da Vinci
Wizard
Administrator

Wow. How often has any team even had 16? It’s not a common score

I believe this counts for the seconds between a touchdown and extra point. So I could see 16 as 7+3+6 or 3+7+6. It's the 19 that I think is the tougher number to hit.
It's not whether you win or lose; it's whether or not you had a good bet.
Wizard
Administrator

I'm adding some more to my prop suggestions.

This is a very rare time I'm betting the over on anything (total punts), but it was a small marginal bet.
It's not whether you win or lose; it's whether or not you had a good bet.
SOOPOO

***: In other words, I win the bet if the coin toss is called correctly, and/or/ if the coin lands on tails.