The Voodoo Zipline is simple in its concept: a cable connects the tops of the two towers of the Rio in Las Vegas resulting in a zipline.  Something similar to a two-person bench on a ski lift takes seated riders from the outdoor part of the Voodoo Lounge on the higher south tower, over the swimming pool below, and deposits them on the top of the shorter north tower.  Then, the bench and it's occupants are flung backwards, back to where it started on the south tower.  On September 17, 2015, I gave it a try with my friend Heather Ferris of Vegas Aces.

The adventure for me began as I searched for the zipline entrance.  There was plenty of advertising around the casino for the attraction, but none of it stated where, specifically, in the Rio to go.  Naturally, as a member of the male gender, I chose wandering around aimlessly over asking someone for directions.  Eventually, I found the ticket office, which is on the second floor of the east section of the casino where people in flying carnival floats used to throw beads to spectators below in the evening. 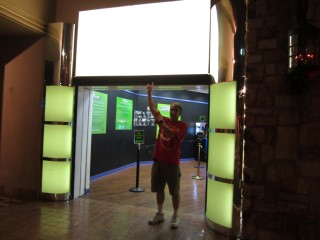 This is where you buy tickets.

The cost of tickets is $27.49 each, including tax.   I asked the cashier if they had a Diamond Card discount.  Without asking to even see the card, she kindly said, "I can give you 10% off."  Part of the ticket-buying process was filling out a waiver that asked for my name, phone number, and date of birth.  What did they need my date of birth for?  Then we turned left out of the ticket office to the nearby elevator to the Voodoo lounge.  Before getting in the elevator, there are lockers to stash your stuff, at a cost of $6 (ouch!). 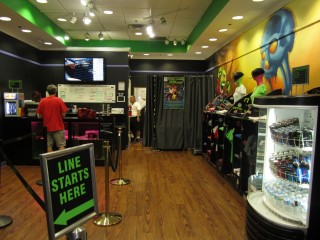 The best part — no line.

The elevator ride to the 51st floor on the top of the south tower is a direct shot to the top two floors in a fast, glass elevator with south-facing views.  I must add at this point that I'm skeptical the building is actually 51 stories high and suspect they may have skipped some floors.  At the top, you follow a corridor to the indoor section of the Voodoo lounge and then to the outdoor portion.  The east facing views of the Strip from here are outstanding, as these pictures will hopefully show. 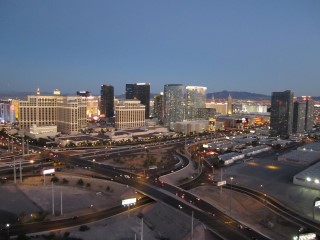 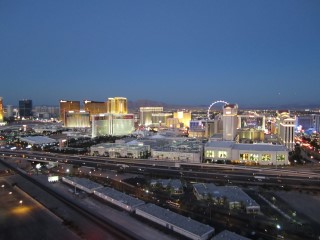 Don't dally too long enjoying the view.  While I was taking the pictures above, I got a text message, which I didn't notice until later, that it was our turn to go.  Eventually, we approached the boarding platform, for which there was zero line.  Before boarding, we were instructed to empty our pockets.  There were more lockers to put your stuff in at this point, this time, happily, free.  At this point, I strapped my GoPro camera to my head.  Unfortunately, I was rebuffed by the attendant who said that GoPros were not allowed.  Dang!  Into the locker it went.

Finally, we were ready.  Heather and  I took our seats and the attendants attached a simple leather strap over us.  I've never ziplined before, but I had a mental image of complicated harnesses, carabiners, and ropes.  There was none of that.  In just a few seconds, we were buckled into the seat and ready to go.

The platform rose about a foot, they opened the gates, and off we went.  According to the website, we traveled at 33 miles per hour at 450 feet high.  As the wind whipped through at high speed, I wasn't sure whether to be frightened at the drop below or to enjoy the view of the west side of Vegas as the sun was setting.  Being in the company of the opposite sex, I had to at least appear to be cool and not scream or close my eyes.

As the ride came close to the north tower, I expected it to slowly come to a halt before going back.  No.  Instead, it rushed  towards the point where the cable was affixed on the opposite end.  For a few seconds, I thought it was going much too fast to come to safe stop.  However, with little room to spare, the ride quickly came to a halt.  Then, it suddenly and quickly started again.  I thought for a half a second there was a malfunction.  However, the joke was on me and it stopped again safely.

Next, the ride goes in reverse and you go backwards up to where you started.  You might think this part would be slow going, but it seemed just as fast.  They must use weights somewhere, much like an elevator, which travel just as fast going up as down.  Despite going backwards, the return trip felt safer and more relaxing.

Once back, you're invited to buy overpriced photos at about $22 each, which I did.  The guy manning the photo booth printed the wrong one initially, which he threw in for free.  Very nice of him. 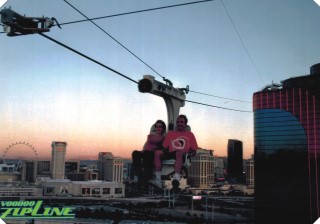 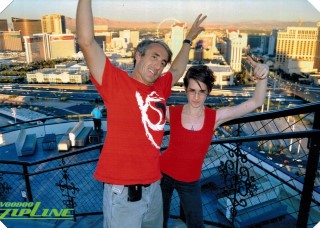 After the ride is a good time to partake in the view of the Vegas Strip from the Voodoo Lounge.  Not only will you enjoy one of the best views of Vegas but the feeling of accomplishment as well.  Be sure to allow time in your schedule for it.

All in all, I was very happy with the experience and give it a recommendation.  My only complaint is not being allowed to wear my GoPro.  I think the reason for this is they hope you will rent one from them instead.  After this experience, I am rip, roaring, and ready to try Vegas' other zipline at Fremont Street. 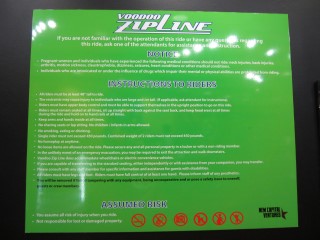 Wizard, I thought it was common knowledge that there are no floors 40-49 at Rio because of the whole Asian death number 4 thing. Unless I am terribly wrong about this, you are correct that you were not actually 51 stories up.

Great review! Will check it out on next trip out.
I felt your writing style has changed a bit too. You seem more relaxed and candid in your comments. +1.

I did this Zipline course out east a few weeks ago with my kids. We had a blast and have kicked around the idea of going back.

It's almost convincing enough for me to drop a bit over $50 (including girlfriend) next time I get out there, but probably not. Too cheap, already have to see a show and stay at least one night on The Strip...lol

Encore has the same 40-49 missing as the Rio