A Guide to Craps Etiquette for a First Time Player

There is arguably no more thrilling game on the casino floor than Craps.  If you're ever in a casino and hear hooting, hollering and the slapping of hands in high fives all around, it's a more likely than not bet that the cacophony can be attributed to a made Point.

What makes Craps a unique and special casino game is the fact that, at least in the case of one or two bets (Pass Line, Fire Bet, Small/Tall/All) the majority of the players are eagerly awaiting the same outcome.  This can occasionally be true in games such as Roulette, if the majority of the table is betting in the same relative fashion, or Blackjack if the Dealer busts, (though other Players may already have too many) but Craps is the one game where the entire table is frequently hoping for the same result.

That same cacophonous roar that occasionally accompanies a Craps game can often be one of a few sources of intimidation for a first time player, there are also other largely unspoken codes of conduct to which a player would do well to adhere, so let's address a few of those:

The first hurdle for a newbie to the exhilarating world of Craps is to figure out exactly what the Hell it is you're supposed to be doing.  In reality, the only bets with which a player need be innately familiar are the Pass (or Don't Pass) and the associated Odds Bets.  If you understand these bets, then you will also understand the Come (or Don't Come) as those bets function in the same manner, but after the Come Out roll. 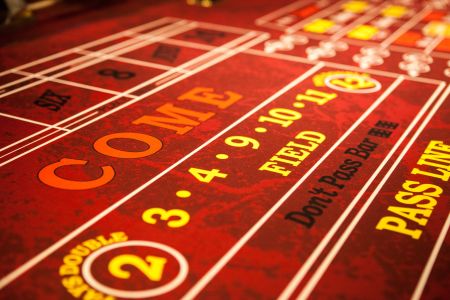 Casinos offer varying Odds Bets which are nothing more than a multiple of your Pass or Don't Pass bet.  Some casinos offer only Double Odds, which means you can put up to double your bet on the Pass Line Odds.  Fortunately, any number multiplied by itself will result in an Even Number, so you can readily always default to Double Odds if you don't know what to do.

Other houses offer 3x-4x-5x Odds which means you can bet triple on a Point of Four or Ten, Quadruple on Points of Five or Nine, and Quintuple on Points of Six or Eight.  Because the Five and Nine are even multiples, this will always result in an acceptable bet.

Other casinos offer Odds of 10x, and sometimes more.  Again, if you are betting the Table Minimum, 10x will always result in an acceptable Odds Bet at that level.

There are other bets on the Table for which one must not concern oneself if the goal is to play optimally.  I will take ownership of a certain degree of hypocrisy, however, because I like to bet the Place Six, Place Eight and toss out a Crap Check on the Come Out (opening) Roll.

If you choose to research these, or other, non-Optimal bets, then I leave you on your own to do so and recommend.

With respect to other bets, I would respectfully suggest that even a new player is expected to have some notion of the proper way to request a bet.

On a particularly busy table, a player might find it difficult to even find a position from which to play the game.  Such a scenario, while some would assert results in the most fun game, could be extremely claustrophobic and intimidating to a new player.

The general rule is:  If there's room for you to stand, then you can play.  One positive aspect of a packed table is that the game tends to move at a comparably slow pace, and as a result, a player may often reduce the Expected Loss per Hour played simply by virtue of having made fewer bets.

There are also those who assert that cocktail waitress service is sometimes faster due to the fact that the ladies will pay more attention to a fuller table.  Personally, I speculate that this might depend entirely on staff levels, besides, more people ordering drinks results in more drinks needing made!

In any event, if you are uncomfortable with a full table, then simply select another time to play.  If you are playing and the table becomes full, then remember that you have the option to leave, but you should not raise an objection to additional players wishing to play  if there is room for everyone to stand.

I wish that my fellow smokers would more consistently adhere to a few rudimentary Rules of Etiquette and not view the entire world as their personal ashtray.  These rules are increasingly important the more packed the table is:

The first thing a smoker should do is ask around to see if smoke bothers anybody.  The majority of casinos allow smoking, which gives one the privilege to do so, but I would suggest others have a superseding RIGHT not to be physically uncomfortable.

If the Craps table is largely empty to the extent you have one side to yourself, then you can probably just light up unless you are so Exceedingly polite that you are inclined to inquire of the Stick and Dealer whether or not smoke bothers them.

Further, I would not even ask to smoke at a packed table unless you are on the end, or between two other smokers who are so indulging.  You will still need somewhere to flick that smoke and it would be impolite to constantly require someone to move out of your way, or worse, to burn the person.

Some players are superstitious and really don't like that number being called out as it would result in a loss.  Silly?  Absolutely.

Players will react to this with varying degrees of affront, but being loudly cussed out is not necessarily unheard of.  The Crew is also not terribly likely to do anything about it as many employees would rather just stay out of the altercation until it is imperative they involve themselves.

For the majority of players who play Craps, I would speculate, they find it the most enjoyable game in the House.  If, at a minimum, you are neutral with respect to the intensity of the table, there is a high probability that you'll enjoy the game, as well.

If you are too intimidated to play at a full table, then perhaps wait for early morning hours from 5a-11a as it is far more likely you'll find an empty table.  Many casinos offer free Craps lessons, as well, so that be something to look into.

If you choose to play, may you make the best bets and have fun in so doing.  I hope to see you at the table one day!!!

Great article, Mission! Craps can be intimidating, but it needn't be. I've listened in on one of those "Craps lessons" that the casino gives. They tell you the mechanics of the game, but they never tell you the "important" stuff!

One thing I might add about the odds bet is that on those rare occasions where you stumble across a 'unicorn' $3 table, (or even $2 -- last time I was in Harrah's Joliet, they had "Two Dollar Tuesdays"), double odds won't work on a point of 6 or 8. Well, double odds will work, you just get short paid. You could say that you will always be good with an odds bet that is a multiple of $10. And on 99% of Craps tables, the minimums are such that double odds will fit this bill.

Oh, another thing, not all tables will have their maximum allowable odds posted. I seem to have noticed that this is happening with greater frequency with the joints I've visited recently. So, if you are new to Craps (or even if you are not), never be afraid to ask the dealer what the max odds are. They will be happy to tell you.

Great point about the sub $5 Minimum Tables, I failed to take those into consideration. My understanding on those tables, for a player who may want less than Max Odds, is that they often allow $5 Odds on the 6/8 regardless of the Minimum. Again, that's only often the case, as I can't speak for every such casino.

What's the story with Max Odds not being posted? Is it because they've changed the Odds but not the signage?

I'm not sure why they don't post the max odds. It's like they don't want anyone to know the odds bet even exists. The signage shows the table min/max, but no mention of max odds.