Recently, I’ve been reminiscing about my Las Vegas trips, including my first visit more than 25 years ago. I visited during winter break while in my senior year of college in Oregon. In that academic year, I joined my school’s bowling team, which was a club sport. We played teams from other schools around the state. I was the team’s worst bowler, with an average of about 150, but I was usually good enough to get by.

I was excited to learn we would visit Las Vegas in December 1991 and bowl in a tournament at the Showboat Casino. I grew up watching the PBA Tour on TV , so I knew about the professional stop there. The Showboat opened in 1954 along the north end of the Boulder Strip, but became Castaways Hotel and Casino from 2000-04. It was demolished in 2005. 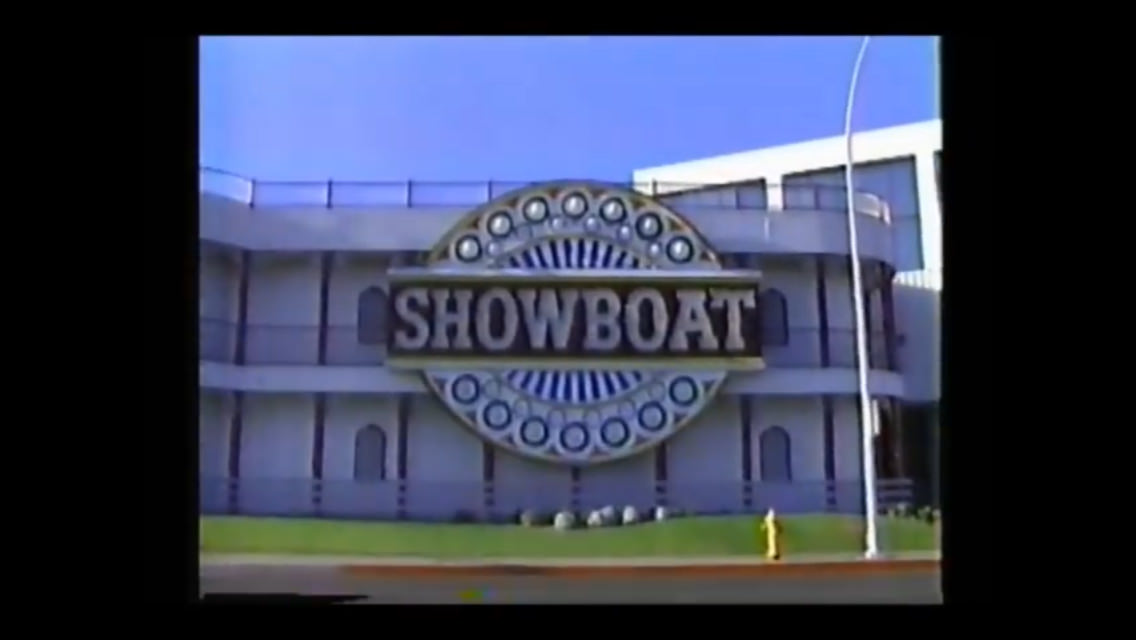 My teammates met at the team captain’s parents’ house in the San Francisco Bay Area and drove to Las Vegas in two cars. I remember it being either foggy or windy along Highway 5 in Central California—but in any case, it was a somewhat scary drive. We stayed at the motel across the street from the Showboat.

I don’t think I was particularly excited about visiting a casino because I grew up hanging out in casino arcades in either Reno or Lake Tahoe nearly every summer. I already had a taste of gambling after turning 21 and playing $1 blackjack at the Horseshoe Casino in Reno right near the Virginia Street sidewalk. (I remember playing with silver slot tokens instead of chips and actually being a little bored with it.) So I don’t think I planned on doing much gambling while in Vegas.

However, there was one wager I never forgot after all these years. Before I discuss that bet, a little backstory: in 1989, the Oregon Lottery introduced Sports Action, which allowed parlay betting on NFL games. I knew about point spreads, and I made occasional bets for fun at the nearby 7-Eleven. So as a cash-strapped college student who now had access to a real Las Vegas sports book, I had the bright idea that I could nearly double my money by betting on an NFL playoff game.

I don’t know why I thought the New Orleans Saints were worthy of a wager. They were a 6.5-point home favorite against the Atlanta Falcons. During a tournament break, I plopped down $66 (about $120 in 2018 dollars) hoping to win $60, at the sports book adjacent to the bowling center. I brought only about $100 or so with me, so the $66 was definitely money that I could not afford to lose. I’m quite sure the vision of a quick payday danced in my head. I couldn’t bear to follow the game, so I returned when the game was over. At first, I thought I had won when I saw a 7-point difference in the final score. But a sick feeling sunk in when I realized that Atlanta won outright by 7 points.

The losing ticket has been stored at my parents’ house all these years. I think I decided to keep it as a reminder of reckless gambling and greed. Years later, I would have two other tales of (relatively minor) gambling woe. It’s surely why I now relegate myself to low-rolling fun. We wandered on the Strip only one night, and it wasn’t pleasant. The main memory was looking for a place to eat dinner, and every place was PACKED. We were at Excalibur, and the line for the buffet snaked around the ropes like a Disneyland ride queue. The wait would be more than 2 hours, and we were already famished. I thought we went over to MGM Grand to settle for food at a hot dog/burger grill inside. However, according to Wikipedia, ground had just been broken in October for the new MGM casino hotel complex at the former Marina Hotel and Casino site. Maybe the casino was still operating, but in a limited capacity? I don’t remember, and I don’t recall visiting the Tropicana, which was also at that intersection of Tropicana Ave and Las Vegas Blvd. I don’t remember any gambling, particularly because my bankroll was busted, but I also don’t remember watching my teammates play either. I think the tables were packed anyway, and the minimums must have been high for that time.

I do recall the outside area being very dark. I don’t think anything was at the current site of New York-New York Hotel and Casino, and a photo on Pinterest appears to confirm that. The ground breaking for the Luxor wouldn’t happen for another 3 months. During that visit, we had to wait for walk signals and then cross the street against oncoming traffic. On my return trip to Las Vegas five years later, there were pedestrian bridges to avoid the traffic and I distinctly remember thinking “this is much better.” Those bridges are now renovated. 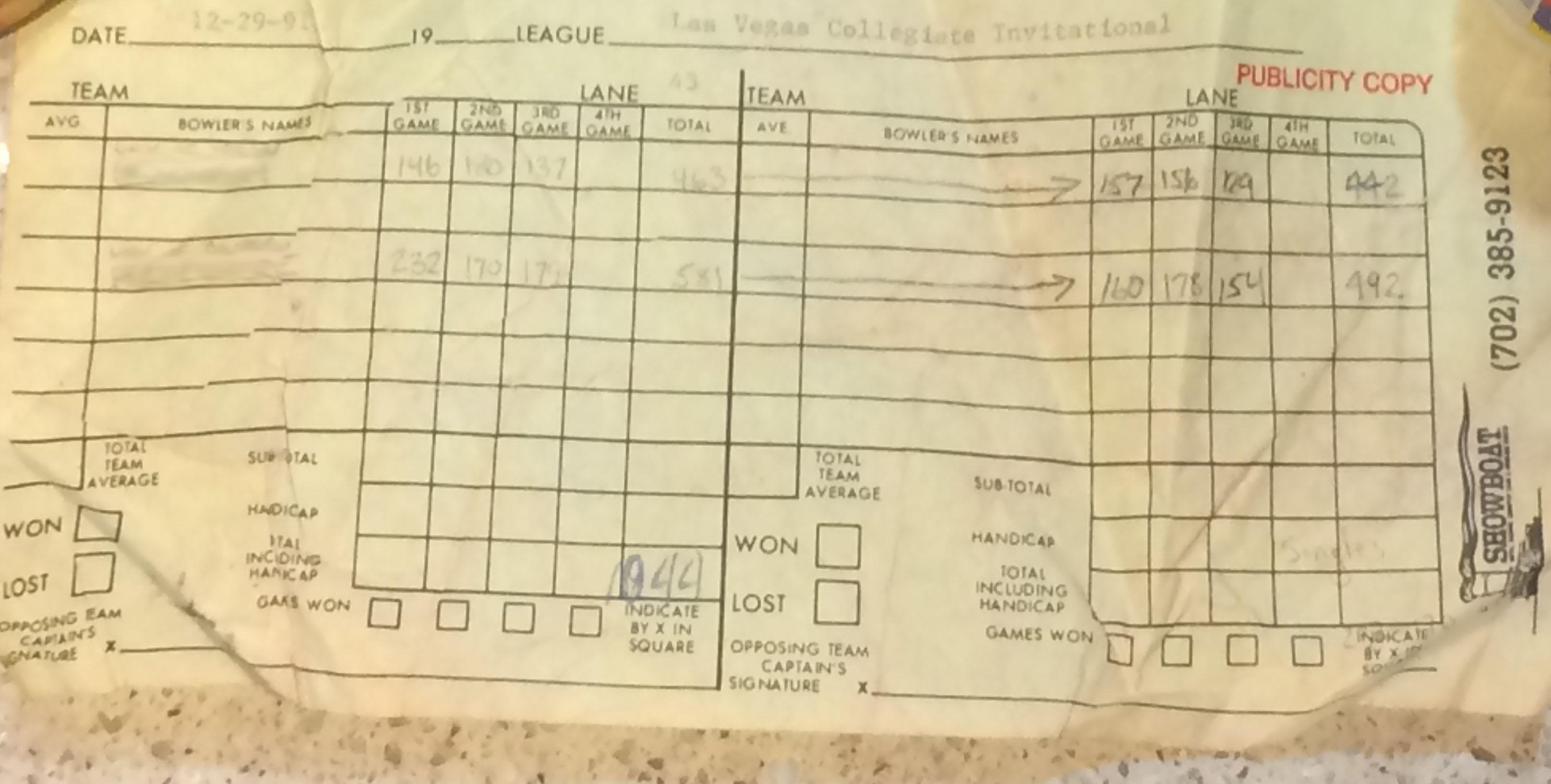 We had cars, so I don’t know why we didn’t go anywhere else along the Strip or downtown. The only other place I remember visiting was Sam’s Town Hotel & Gambling Hall later in the trip for a second tournament. The main memory from that visit was that our team was pitted against the #1 team in the country, Wichita State. Those players were bowling on athletic scholarships! Early on, we were bowling out of our minds—with strike after strike up and down our roster—and were hanging with Wichita State for about six frames. By the seventh frame, we either lost our mojo or our confidence, and those guys blew us away at the end. Sam’s Town and its bowling center are still there, so maybe I should return one day for old time’s sake.

I didn’t return to Las Vegas again until 1996, which would start a string of mid-to-late ‘90s visits in what I consider the Vegas heyday. I shall try to blog about those trips when I find more souvenirs from my collection!

Cool story! My first Vegas visit was also in the '90's. I was 19 and couldn't do anything fun except a little shopping, so kind of a wasted trip... haha...

Thanks! But I gotta believe you did SOMETHING fun in Las Vegas, even at age 19!

Great story, Smooth! This reminded me of my first trip to Vegas on New Year's 1996. Maybe I should start a "First Vegas Trip" thread!

Thanks Joeman! Yeah, my first trip to Vegas wasn't the best, but it was certainly memorable in many ways. You'd be an appropriate person to start such a thread!

Like baseball, what makes gambling interesting to me is the statistics. In 2010, I started logging all my gambling, and the log itself with its memories of casino visits was a source of enjoyment. So I was relatively devastated when the cloud server I use lost a couple dozen of my spreadsheets, including my cherished log. Miraculously, for some unknown reason I downloaded a copy of it after my most recent trip, and I found it on an external hard drive. There's a saying I like: imagine losing everything in your life that you love, and then getting it all back. I'll definitely not trust the cloud and will keep backups from now on!

Anyway, I regaled myself with some interesting (to me) statistics of my low-roller play.

I also have some miscellaneous bets from coin-operated games and horse racing that I didn't include.

I also keep a pretty accurate record of wins and losses, I would bet that is fairly common for folks here and somewhat uncommon with the average player. I think I will blog about it too

It's great when you know you are ahead even when it is 'for a period of time'. But I think some of this is +EV for you?

Yes, I'm amazed that I'm ahead by so much. But I figure if I averaged a $100 loss every year of gambling before that, I'm probably about even.

I broke out the poker to distinguish "skill" vs. -EV games. But then, I guess I should break out cash games vs. tournaments. Let's do that now!

Also, while I generally played blackjack by jumping in while the count was good, I didn't always do that. Sometimes I just sat down and flat-betted until a favorable count.

I used to think I tracked my money too closely, but you’ve got it down to the penny.

I try to be accurate, but sometimes in the heat of leaving a table, I might have to guesstimate.

Also, I subtract dealer/cocktail waitress tips from my totals, and here's another time where I have to guesstimate when I've won several pots.

Nice job with the records! I'm not super thorough and only down to the dollar, but I try to keep as accurate as possible. I usually keep track over years, but since I've used apps for it, I had a hiccup. Luckily the one I'ved used the last couple of years can just be exported to my spreadsheet and I can fool with on the laptop. I like the subtracting of tips. I do add that in my trip totals, as well as room value, so I can stay in front of exactly how much I'm getting out of it. Not food, though, as I'm eating anyway. Just more specific casino related expenses.

i used to keep detailed track of my bonus hunting play back in a day. But once the golden age of blackjack bonus whoring was over so was my tracking too