I have to confess, I haven't even attempted to solve this problem. (I think I have become tired of my head frequently failing to do what it is supposed to be able to do, so maybe I avoid challenges!) When I first read the problem, my mind made a leap (assumption) that the missile path would be a parabola, but I don't really have much basis for that other than feeble "intuition."

I did like the looks of the Wizard's graph of the trajectory. While I was stationed at White Sands Missile Range fifty years ago, I watched quite a few launches, most of which were set to fly a programmed route, while a few were trying to intercept drones (testing the full system of missile, target-tracking system, missile-tracking system, and guidance). From ground level, I could not detect any visual difference between those paths and the Wizard's graph. About the only comment I can offer from that experience is that the assumption of a constant velocity missile would not represent the norm -- those things begin at rest, experience a period of very-high acceleration, and just maybe a period of constant velocity prior to intercept.

My father went to the White Sands Missile Range a lot when I was kid. He had a very high security clearance, so couldn't say much about what he did. However, I do know his expertise was in anti-missile missiles. In particular, how to find a missile in air, as evidence by the rocked flair. He knew a great deal about the signature of the flame various things gave off when they burned, especially rocket fuel, including the kind that propels missiles.

I, of course, am not saying what you said is incorrect. However, I had the impression from my father that the way his tests went is when an enemy missile was detected some quick computer calculations were made about where to aim the anti-missile and then let that anti-missile find the target exactly by the rocket flair.

I wonder if you two might have met at some point.

The opening scene in Octopussy, where an anti-plane missile is fired at Bond's plane, demonstrates the principle.


Direct: https://www.youtube.com/watch?v=wFVITG5Ymnc
It's not whether you win or lose; it's whether or not you had a good bet.
CrystalMath

Quote: CrystalMath
1.9780219 miles
Purely numerical solution.
I don't even know where to start, mathematically. I'm sure it would have been no problem when I was in high school, but it makes my head hurt now.

I've been wrong before, but I disagree. I worked out a numerical solution in Excel and you can see from the graph below, my answer at least 2. 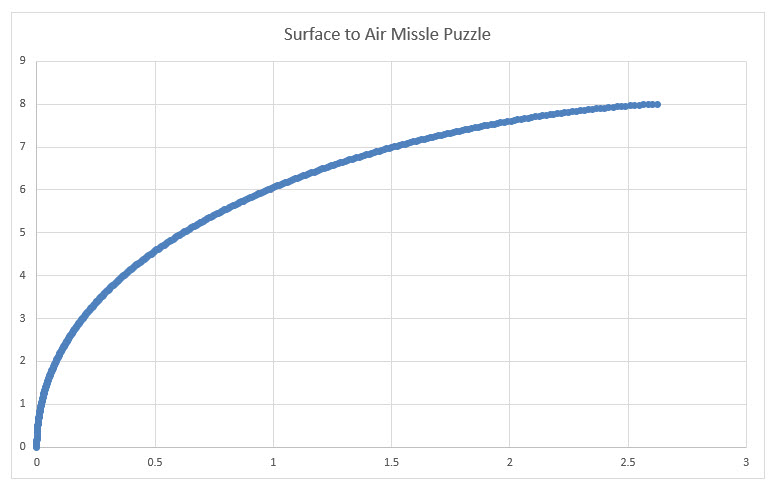 Ah yes, I was using a height of 6 miles.

My father went to the White Sands Missile Range a lot when I was kid. He had a very high security clearance, so couldn't say much about what he did. However, I do know his expertise was in anti-missile missiles.

I wonder if you two might have met at some point.

I was at White Sands from May 1969 through February 1971. The office I was assigned to was the high altitude air defense projects office of the Army Missile Test and Evaluation Directorate.

During that period, our office worked with contractors for the Nike-Hercules, the SAM-D (which stood for Surface to Air Missile Development and later became the Patriot missile), and the Sprint. While I was there, none of those missiles was fired at a physical target. By the time I left, the Sprint test program was moving to the Kwajalein missile range in the Pacific so that it could be tested against long-range incoming missiles.

I suspect that launches of various missiles at WSMR were used for collection of data for how to detect and track a target missile.
Wizard
Administrator

Wizard
Joined: Oct 14, 2009
Does anyone request more time, or did I stump the forum?
It's not whether you win or lose; it's whether or not you had a good bet.
Wizard
Administrator

Does anyone request more time, or did I stump the forum?

Second and last opportunity to request for more time.
It's not whether you win or lose; it's whether or not you had a good bet.
ThatDonGuy

So, what's the solution?

I have not gotten around to writing it up. I may make a video of it as writing mathematical notation is time consuming.
It's not whether you win or lose; it's whether or not you had a good bet.
7up