Who do you think will be the first female President?

Nathan
Joined: Sep 2, 2016
After Hillary Clinton came so close to becoming the first female President, and Donald Trump became the President instead, it has been reported that more and more of age females have been seriously considering becoming the first female President. I remember someone saying that Elizabeth Warren has a good chance of becoming the next President and they said that she wasn't corrupt and had good morals. Someone else on this board said something like,"Not really. She claimed to have been half a minority to get special treatment. I said Michelle Obama had a good chance of becoming President as she worked her butt off as First Lady with her children's food programs and "Let's Move!" Dedicated to keeping kids healthy. Someone replied something like," Uh, no. Michelle just basically did what was required of her to do as First Lady. Michelle's food programs and "Let's Move!" Were failed jokes. Betty Ford was a much better First Lady. Betty worked her ass off in office and after office she still continued to work her ass off. In fact we in 2018 are still using her contributions such as The Betty Ford Center even after she's been gone from office for decades."

I remember someone said something like ,"For the 2016 election, I felt both Hillary Clinton and Donald Trump were ridiculous jokes. I voted for Jill Stein."

IMHO, the first female President Candidate should have good morals, be uncorrupt and focus on the issues that unnerve USA citizens. And as a cherry on top, not bash her opponent in the campaign. A lot of people have said they actually don't like political mudslinging in campaigns and actually would love to see the Candidates just tackle tough issues.
Last edited by: Nathan on May 16, 2018
In both The Hunger Games and in gambling, may the odds be ever in your favor. :D "Man Babes" #AxelFabulous "Olive oil is processed but it only has one ingredient, olive oil."-Even Bob, March 27/28th. :D The 2 year war is over! Woo-hoo! :D I sometimes speak in metaphors. ;) Remember this. ;) Crack the code. :D 8.9.13.25.14.1.13.5.9.19.14.1.20.8.1.14! :D "For about the 4096th time, let me offer a radical idea to those of you who don't like Nathan -- block her and don't visit Nathan's Corner. What is so complicated about it?" Wizard, August 21st. :D
GlenG

GlenG
Joined: Feb 5, 2018
She's probably like 15 years old currently. I dont think we will see a strong enough candidate until the next generation of politicians come in...my prediction is she will be Republican.
Johnzimbo

Wizard
Joined: Oct 14, 2009
I think it will be a Republican woman who leans towards the center. Nikki Haley I could see. 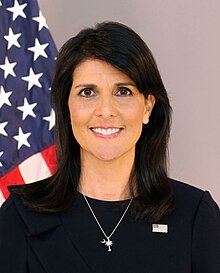 It's not whether you win or lose; it's whether or not you had a good bet.
billryan

billryan
Joined: Nov 2, 2009
I imagine 99% of you have not heard of her but I expect big things from a Long Island Congresswoman named Kathleen Rice.
She went up against a very powerful political machine to defeat a DA that had been in office since Nixon. If and when, or when and if, the Democrats take the House, I think she will get a lot of airtime. I met her when I attended an early campaign fund raiser. She was not very warm but very calculating. She actually convinced much of the room that she, a newcomer to local politics, could defeat a guy who was first elected in 1974 but who had run unopposed twice. Been watching her since.
A problem might be NY has several upcoming Democrats and she is junior to them.
2028 might be early for her but if no woman is elected before 2032, it wouldn't shock me if it were she.
Last edited by: billryan on May 15, 2018
darkoz

This has got to be a sock puppet

WON is that you?
Last edited by: unnamed administrator on May 16, 2018
For Whom the bus tolls; The bus tolls for thee
darkoz

Just when you get rid of them they seem to reinfect

A bad case of Wonorrhea
For Whom the bus tolls; The bus tolls for thee
GlenG

Just when you get rid of them they seem to reinfect

AxelWolf
Joined: Oct 10, 2012
obviously, Roseanne Barr will be president.
♪♪Now you swear and kick and beg us That you're not a gamblin' man Then you find you're back in Vegas With a handle in your hand♪♪ Your black cards can make you money So you hide them when you're able In the land of casinos and money You must put them on the table♪♪ You go back Jack do it again roulette wheels turinin' 'round and 'round♪♪ You go back Jack do it again♪♪
Nathan

obviously, Roseanne Barr will be president.