I'm thinking a few hundred passes the smell test...
the next time Dame Fortune toys with your heart, your soul and your wallet, raise your glass and praise her thus: “Thanks for nothing, you cold-hearted, evil, damnable, nefarious, low-life, malicious monster from Hell!” She is, after all, stone deaf. ... Arnold Snyder
Wizard
Administrator

what kind of money makes the cashier potentially balk at cashing chips?

Naturally, the nicer the casino, the more they will take without asking any questions. At a certain point, they will ask to see a player card, to verify you were playing. If you don't produce one, then they will ask what game you were playing, and call the pit to verify. The question is, at what point do they request a player card. At the nicest properties, I think it is at about $2,000. At the worst, about $200.
It's not whether you win or lose; it's whether or not you had a good bet.
boymimbo

I like to keep my players' cards and one $1 chip from all of the casinos that I played in. Pens run out of ink. Paper clips get lost. Books of matches get used.
----- You want the truth! You can't handle the truth!
AZDuffman

I just watched 21 and something struck me as ridiculous.

After a pretty big night, Kevin Spacey says they have to cash in their chips real fast before they're switched by the casino to keep from paying out their large win.

They then go to this elaborate scheme of having the local strippers cash in the chips for them.

Aside from not trusting my chips with a bunch of the local strip club girls, the whole changing of chips seems ridiculous.

If the casino thought they had been cheated, would they wait for the chips to be cashed in? And if they simply changed chips, voiding all the ones in play, what about the other players at the casino.

I mean, I recently left with $50 buck worth of chips in my back pocket. Two weeks later I went back to play. I would have been pissed if I was told they were no good anymore. That doesn't even sound legal.

So, was that a huge crock of Hollywood Bull. My logic tells me so.

OK, some "real vs Hollywood" is in order:

The strippers were not used, that was Hollywood. When interviewed a team member said, "We didn't have strippers change chips and we didn't keep them in the drop-ceiling to our dorms. We were at MIT for crying out loud." So that is a movie.

However, there were chips called in during thew MIT Team's play. It was at the MGM when there was a riot after Mike Tyson bit Hollyfield's ear. The whole casino had to be cllosed and as high-value chips were compromised they were called in. I forget what happened but I think the team members showed a history of play and thus got them paid for.

Another case of chips being called in was in the book "Supercasino" at Luxor. They had somehting like 10 $1,000 chips stolen, so they changed them out to another style chip they used. When people came to cash them in they were caught. In that case I think they were mostly just 86ed from the place since there was no proof of theft and it would not have been worth it for the casino to show they never played there as it is hard to prove a negative if you can at all.
All animals are equal, but some are more equal than others
Nareed

In yesterday's re-run ep, a group of people find a lot, say almost all, the chips from an extinct, bankrupt, casino: the Hux casino (fictional, of course, with Mr. Hux being a thinly veiled version of a Mr. Heffner).

The story is the chips were sent out to be destroyed after the casino closed. Fine. But the chips had some metal inlays and were too hard on the shredding mahcines. So instead of shredding them, they were buried at the grounds of a chip-making company. A group of people including a derelict and the owner of a small restaurant find the mother lode.

Murder ensues, this being CSI after all. But the interesting part of the myth is this: the state gaming commision anounces it will redeem any extant chips at face value.

Now, this seems ridiculous to me. After all chips are issued by casinos, not by the gaming commision. therefore only the casinos would be liable as regards chips. If a casino went broke, the chips in posession of players would be a matter for the bankruptcy court to adjudicate, as I undesrtand the law (so would be any slot tickets and sports book tickets). The casino's owners might still be liable for said chips, depending on lots of factors. But the Nevada gaming comission? I just don't buy it.
Donald Trump is a fucking criminal
playpianoking

Casinos can and often will wonder how you are cashing chips there if you've not gambled there. They will simply offer you an opportunity to make a statement and then give you a receipt for the chips. You then have to take your dispute further. Supposedly their concern would be related to evading the currency reporting requirements.

I believe casinos do have a second set of chips already on hand to switch out in case of a major robbery or something but usually lots of notice will be given before chip sets are retired.

As for strippers or hookers cashing chips, thats absurd. Pure Hollywood for sure! You give chips to a hooker, you ain't gonna get them back!

What are you talking about? If you cash a chip they aren't going to know whether or not you've gambled there.
Wizard
Administrator

What are you talking about? If you cash a chip they aren't going to know whether or not you've gambled there.

They will if you present a player card that you used when you played.
It's not whether you win or lose; it's whether or not you had a good bet.
DJTeddyBear

I like to keep my players' cards and one $1 chip from all of the casinos that I played in. Pens run out of ink. Paper clips get lost. Books of matches get used.

My wife gets pissed every time she sees my stack of souvenir chips.

And I tend to be a sucker for commemorative $5 chips!

FleaStiff
Joined: Oct 19, 2009
Actually there seems to be a market of some sort for chips from defunct casinos. Collectors for everything somewhere.
I'd rather just gamble that one dollar chip and if I win, my memories will come from winning not from hording.
Wizard
Administrator

Wizard
Joined: Oct 14, 2009
There are hundreds of people who collect antique casino chips. Once a year there is a pretty big convention of casino collectables, mostly chips, at the Riviera. I have a small collection myself. Here is a picture picture of some of my best chips. 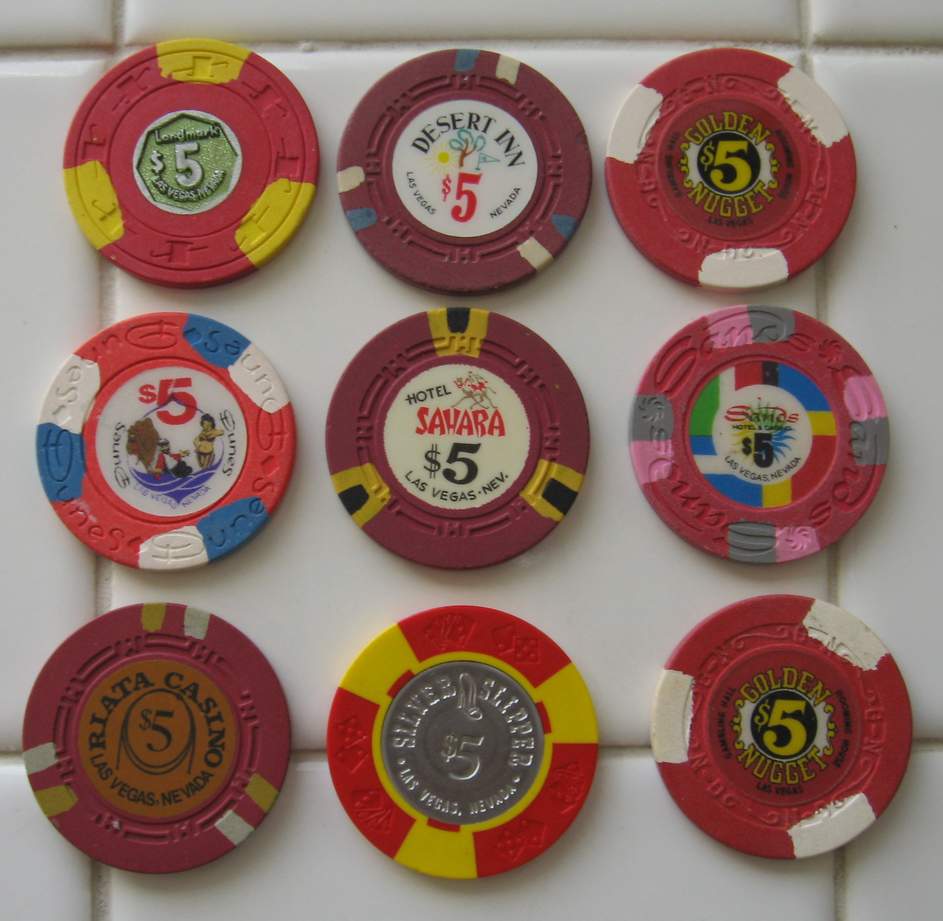 Collecting the new editions is for suckers, including me. As a rule of thumb, I'd say a chip has to be at least 25 years old to be worth more than face value. When I did my review of the Four Queens, a guy at the cashier next to me was cashing in hundreds of novelty Four Queens chips, saying he couldn't get more than face value on eBay for them, so was giving up.
It's not whether you win or lose; it's whether or not you had a good bet.
RSS Feed