I was on the fence about making my own thread. I won't live up to PG in terms of detail and frequency. However, it was suggested that I make a second rate knock off thread. I'll be going to Asia this year too, so why not.

To begin with, here is some street art depicting a great Mexican. 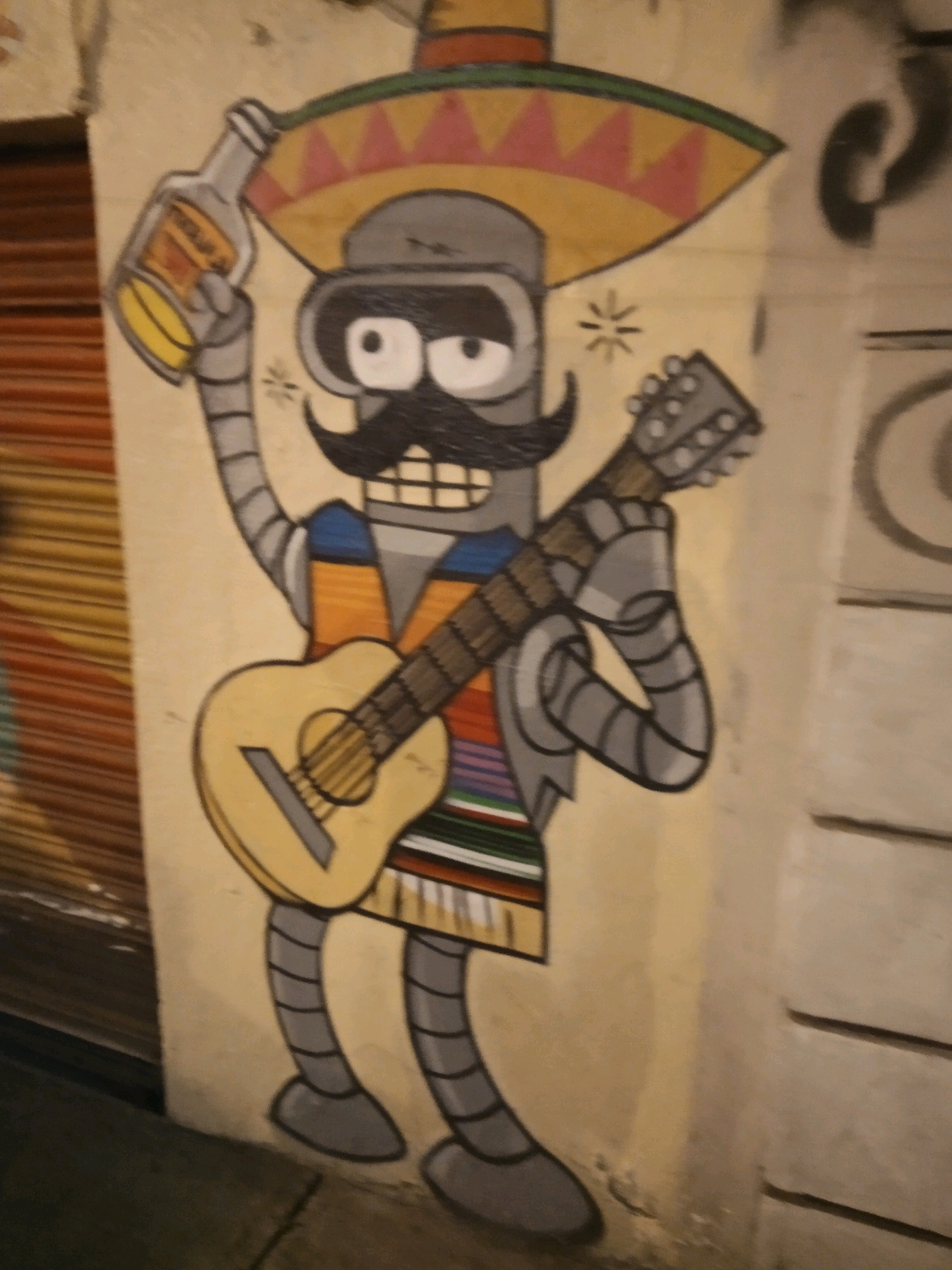 The good. My friend's housekeeper brags that she makes pigs. Meaning, she won't allow you to turn around without delicious dishes, fresh fruit juice and relentless snacks. This was the best mole I've ever had, and it ain't close. What good luck to have a local source of home made food. 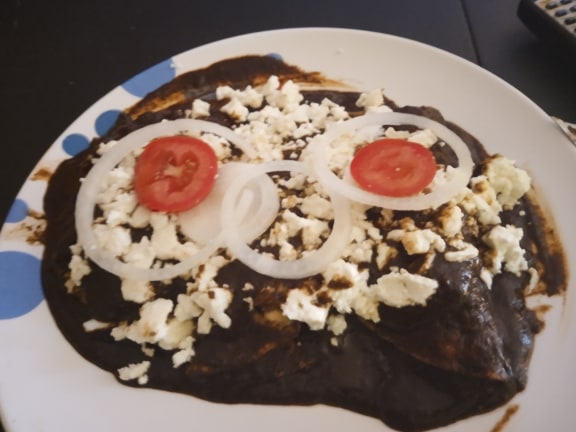 On the other hand, she also made these. I was astonished to learn that she caught them herself. I summoned all of my courage and ate 2. The taste was fine: chile and lime, but I couldn't get over the fact that I was eating a bug. I could feel it's legs in my mouth.

I asked them what kinds of foods they would be squemish about eating. They thought about it for a while and decided there really weren't any. 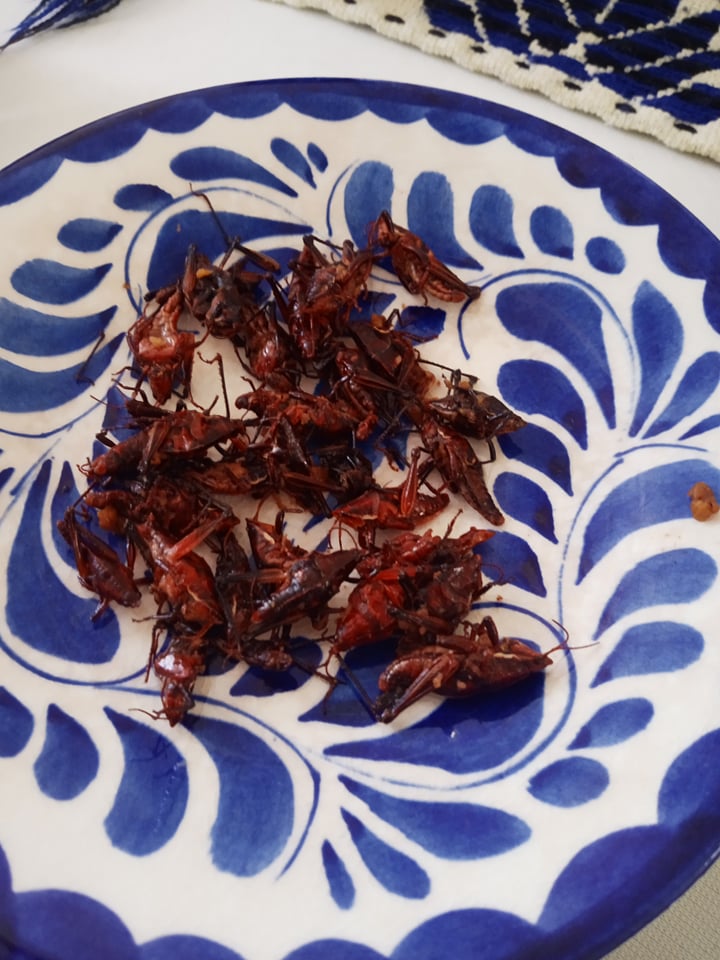 The ugly: This is a very poor photo, but one of the best pizzas I've ever had. The outside was charred and crisp. The bread was really puffy and soft and doughy on the inside. I also had some of the best pastries I've ever had in CDMX. It's not that the recipes were anything special, but they were unelievably light and delicate. My theory is that this all has to do with the altitude, which is 7300 feet. About 2000 feet higher than Denver. 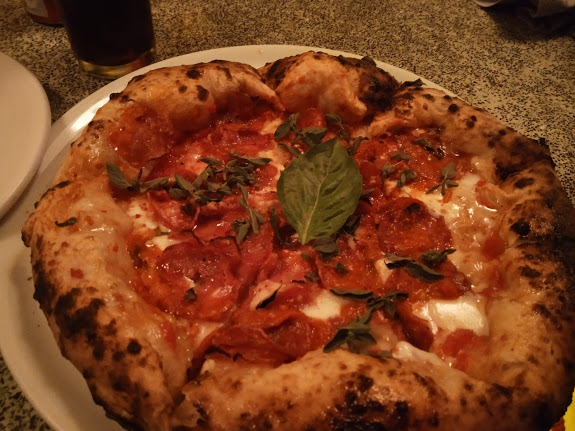 Again, CDMX is in the mountains. It is mild and green. A really beautiful city, with an incredible number of parks and gorgeous streets. There is some real poverty, but there are also affluent neighborhoods that stretch for miles.

A park. Light rain is common, which I love. This was the only real downpour. 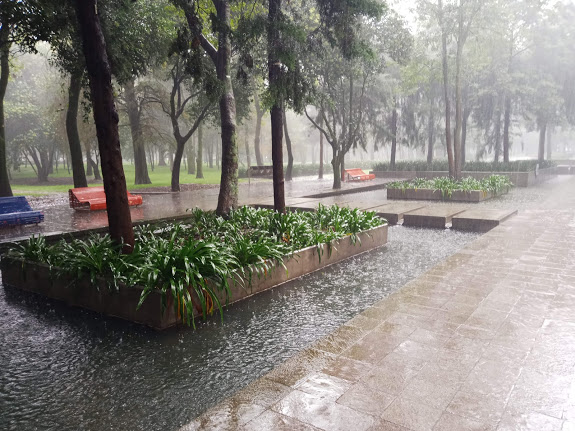 Moar parks, squares, fountains. These exist even in poorer areas. 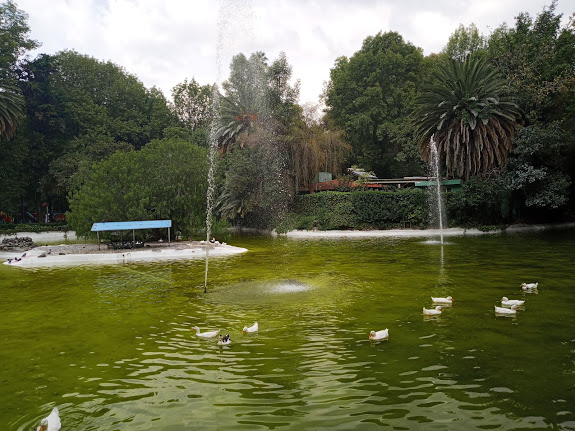 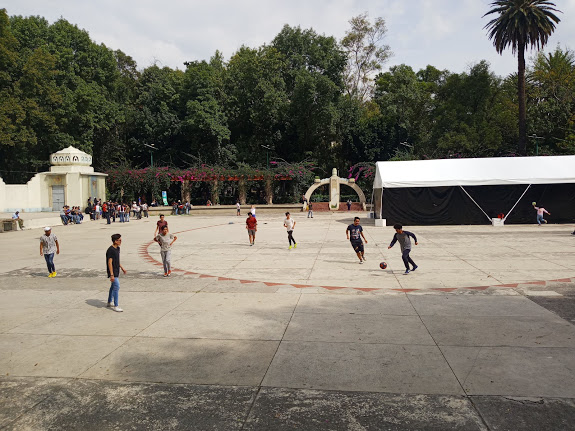 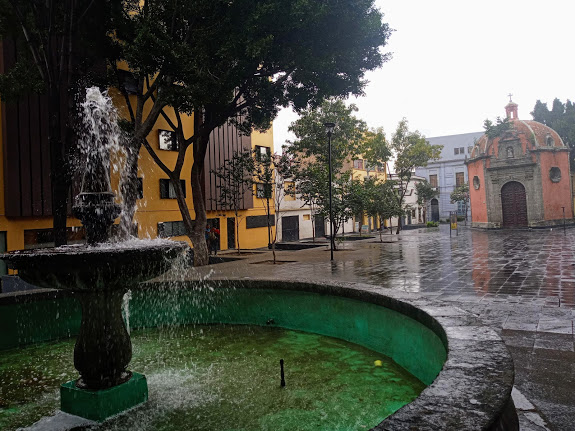 Two women eating at a restaurant in the affluent area of Candesa. 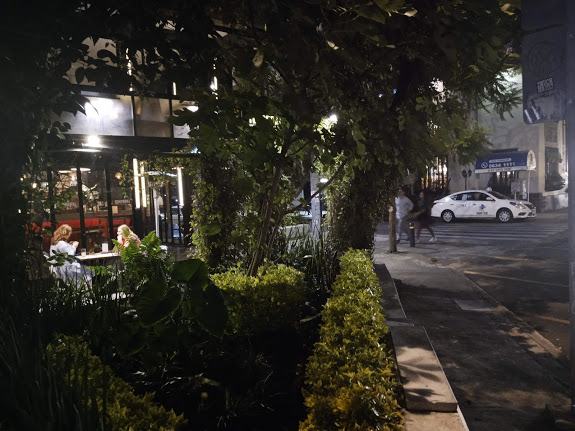 At one of the parks, they were having an adoption drive for pets. I ODed on cuteness. 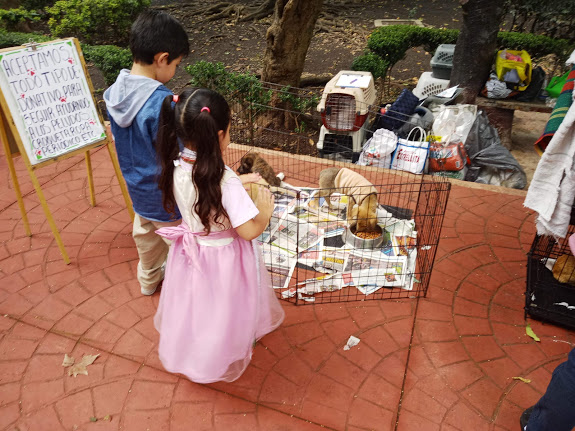 darkoz
Joined: Dec 22, 2009
I seriously thought you were being insulted by being called a "broad".

oh, you are "abroad"

I seriously thought you were being insulted by being called a "broad".

oh, you are "abroad"

The title is accurate.
♪♪Now you swear and kick and beg us That you're not a gamblin' man Then you find you're back in Vegas With a handle in your hand♪♪ Your black cards can make you money So you hide them when you're able In the land of casinos and money You must put them on the table♪♪ You go back Jack do it again roulette wheels turinin' 'round and 'round♪♪ You go back Jack do it again♪♪
DRich

The title is accurate.

I thought he was finally revealing his transformation surgery.
Living longer does not always infer +EV
Ayecarumba

Ayecarumba
Joined: Nov 17, 2009
So what exactly is "mole" (I don't know the code for the accent over the e)? I always thought it had to have a cocoa base, but others have said it is just a family of sauces.
Simplicity is the ultimate sophistication - Leonardo da Vinci
Rigondeaux

Mole (/ˈmoʊleɪ/, /ˈmoʊli/ Spanish pronunciation: [ˈmole]; from Nahuatl mōlli, "sauce") is a traditional sauce originally used in Mexican cuisine, as well as for dishes based on these sauces. Outside Mexico, it often refers specifically to mole poblano. In contemporary Mexico, the term is used for a number of sauces, some quite dissimilar, including black, red / Colorado, yellow, green, almendrado, de olla, huaxmole, guacamole, and pipián. Generally, a mole sauce contains a fruit, chili pepper, nut, and such spices as black pepper, cinnamon, cumin.


I had it about 3-4 times. It always seemed to refer to the chocolaty sauce that we think of.
Rigondeaux

I have a little time to kill.

One of the cool things there is these wandering street performers. It's cool because they are almost all very good. This is a welcome relief from the people in Halloween costumes who shake down tourists in Las Vegas.

One person there told me of being photobombed by a bunch of those bums in Time's Square, who demanded $20. Her first impulse was to cave in, being in a foreign country. But she told them to "F. off." I told her she did the right thing. Anyway, these guys were excellent. 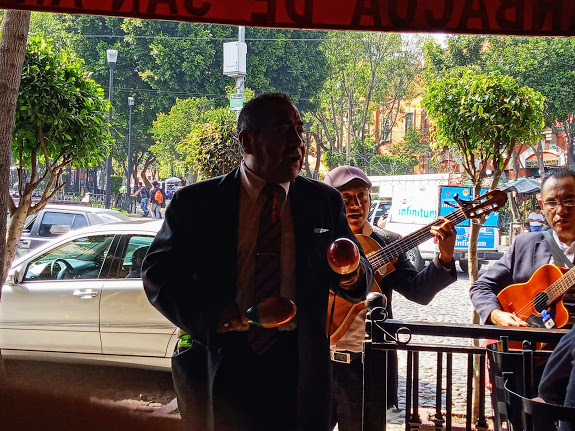 The Anthropology Museum is the nuts. That column way in the back is close to 50 feet high. There's some kind of funnel on the top and when it rains it turns into this giant fountain. It was hard to really capture it with a photo, but it was very cool. 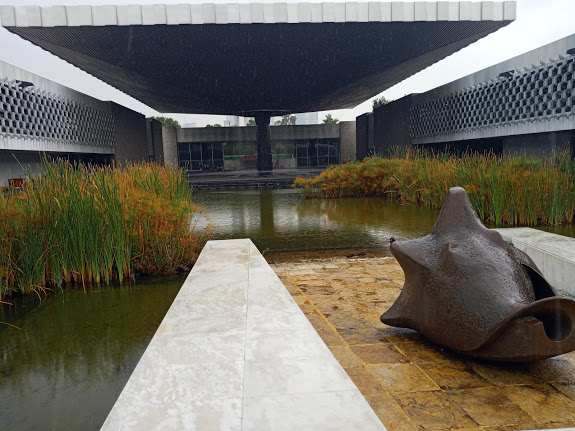 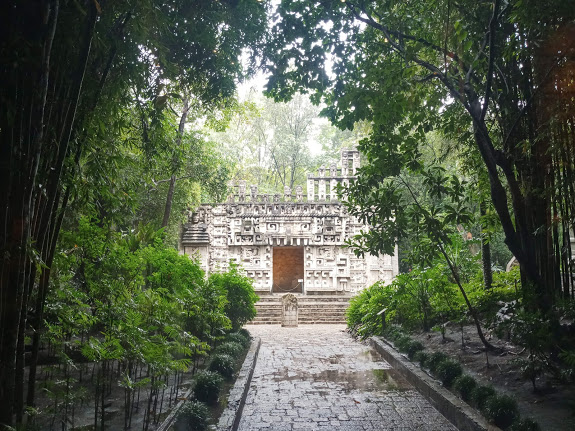 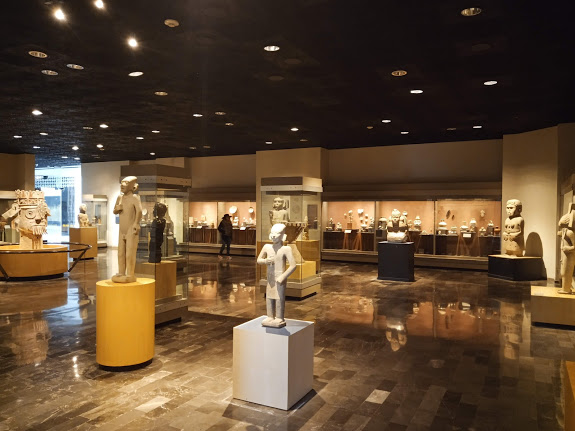 I should have just zoomed in on the mask. Looks a bit like the one Jim Carey wears. 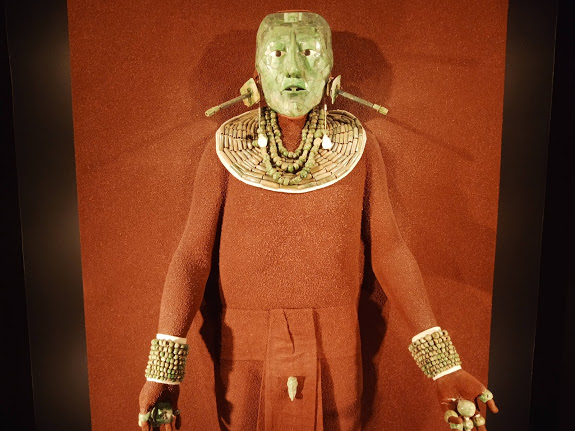 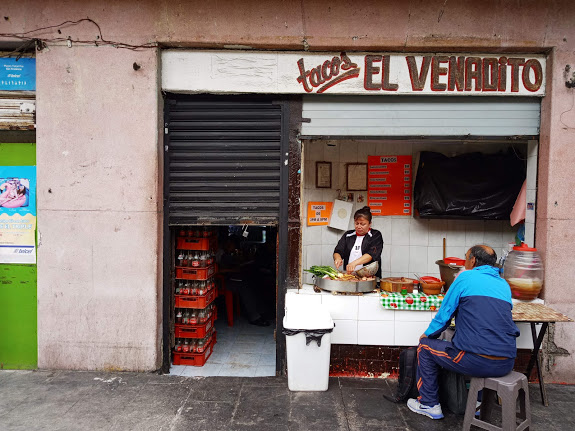 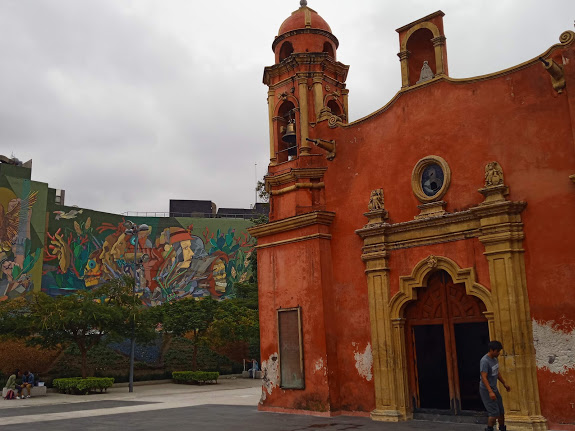 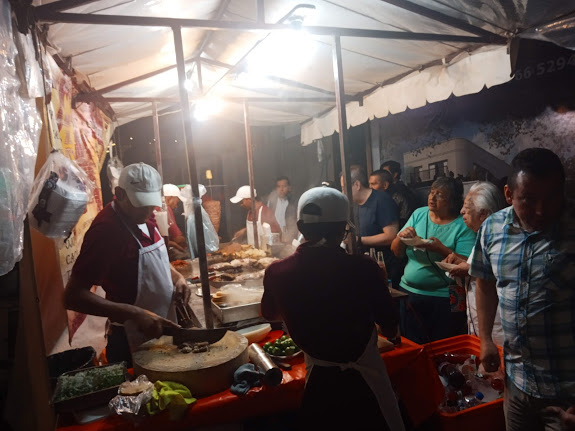 Stumbling about aimlessly, I found the biggest marketplace I've ever seen. There were large buildings, many of which had interiors with markets containing butchers, fruit vendors etc. All of the buildings had little shops. And on top of that, the streets were lined with stalls. I walked through this for over a mile. IDK how big the whole thing is.

There wasn't much of interest to a tourist. School and office supplies, Halloween costumes, cheap clothes, knockoffs, and lots of food. This is where I saw vast quantities of Marshmellow merch.

It was kind of crazy to think that people showed up every day with a little stall that sold, say, backpacks. They might have 150 backpacks and that's all they sold.

I saw an interesting conversation on twitter once about the economics of small shops. It started talking about Bodegas in NYC and expanded to these types of shops. It turns out that these kinds of places will offer lower prices than bigger stores because of low over head. But in many cases, bigger stores (say a 7-11) will just buy them out and raise prices. 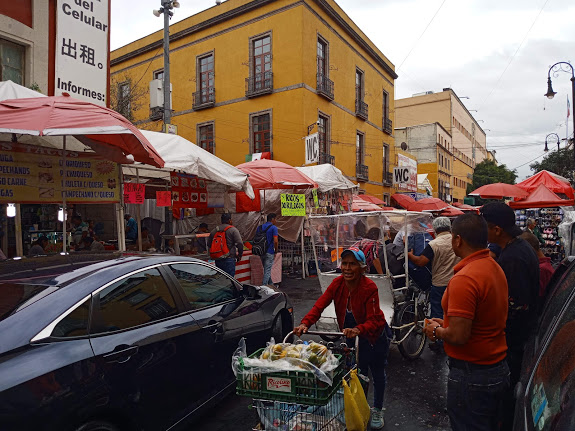 There are more of these street vendor types than anywhere I've been. But, apart from that, it is like many places in say, Europe. Wal Mart and Home Depot exist but there aren't many. There are supermarkets, but they are smaller than ours. And there are tons and tons of mom and pop shops. 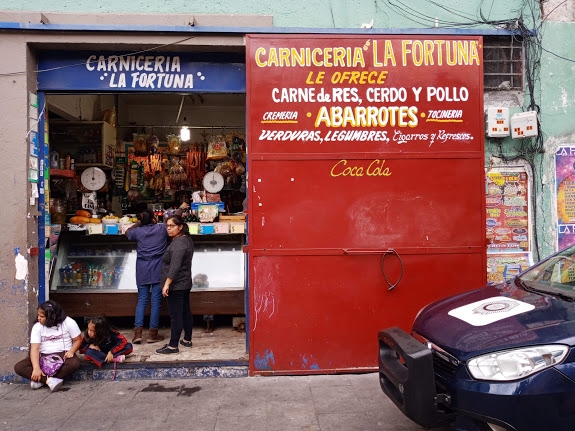 I also found some pics of Brazil from 10 years ago. Back when I was fun. I'd forgotten how wild it was.
RSS Feed