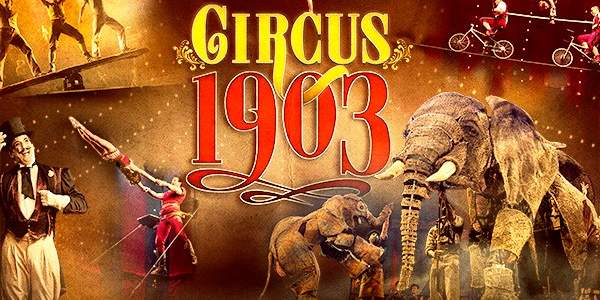 I had been looking forward to an opportunity to see the new show, CIRCUS 1903, at Paris. So when we saw this was on the current list of shows available to Caesars Diamond tier members, we got comp tickets for a Saturday evening performance.

The show sounded like a great concept to me, especially in a big classy showroom like the one at Paris. I envisioned a big production, a salute to classic circus acts of days gone by, possibly an interesting story line weaving it all together, and maybe even a small live band.

Unfortunately, not so much, sortof, no, and no.

Some of the circus acts were pretty good, but most of them don't reach the bar set by the Cirque du Soleil franchise. The contortionist was pretty impressive, and the juggler also put on an impressive display. I even liked the "bicycle ballet".

However, the spring-board gents that opened up the show were not that impressive, certainly not by Las Vegas standards. And the tight-rope walkers didn't do anything we hadn't seen numerous times before.

I give credit to the Ringmaster for a good effort, he was able to introduce some decent comedy. But, when one of your long bits centers on a group of four little 5 to 6 year olds up on stage, you are taking a gamble with such a young age group. Several of these tiny tots went up on stage but had second thoughts and returned to the safety of their parents in the audience, which broke up the timing. But as they say, the "show must go on".

The puppetry of the elephants was very interesting, but didn't seem to tie in to the show at all. They walked out on stage, then shortly afterwards they walked off stage.

This looked like a show that was still trying to work out the bugs in their line-up of acts, but they opened up a couple of months ago in late July. I still think there is potential for this show, but unfortunately they need to up their game sooner than later, or they won't be around long enough to accomplish that. The show we saw was very sparsely attended for a Saturday night.

https://www.reviewjournal.com/entertainment/entertainment-columns/robin-leach/circus-1903-opens-in-paris-las-vegas/
Like the castle in its corner In a medieval game; I foresee terrible trouble And I stay here just the same
RSS Feed