14. New Jersey Sportsbooks to Surpass Nevada Again. http://bit.ly/2KC9vUx
Online Casino-games have received a boost from the proliferation of online sports betting in New Jersey.
Together they have helped accelerate the development of both industries, even while the retail market has made gains,” Eric Ramsey, online gambling analyst for PlayNJ.com said.

15. Six Iowa casinos launch sportsbooks on the first day they are legal. http://bit.ly/33CIEiL

23. Another win for Ponca Tribe of Nebraska in legal fight over its Iowa casino. http://bit.ly/2H7bQVh

31. (Pennsylvania) Located in Westmoreland Mall, about 38 miles or about an hour’s drive from downtown Pittsburgh, the casino that is being built in a former department store in Hempfield won’t have any local identification in its name, a fact that county officials said was curious but not a major concern. http://bit.ly/2MnibQI

32. (West Virginia) A series of Wednesday night shootings that left one person dead and three others injured in the vicinity of Mountaineer Park sparked a “shelter in place” order from police that led to the cancellation of races five through nine at the West Virginia racino. http://bit.ly/2Zd0BVy

34. (Arkansas) The Arkansas Racing Commission denied an appeal from Gulfside Casino during their meeting on Thursday, August 15. The Gulfside application had support from last year's administration in Pope County. http://bit.ly/2KCT4aC

35. (Ohio) An Arizona man accused of trying to launder more than $1 million in drug money by making it appear it came from cashed out winnings at Hollywood Casino Toledo pleaded not guilty Thursday to multiple felony charges. http://bit.ly/2TCCpqy

36. (Illinois) As Hard Rock International continues its push for a casino in Rockford, the group opened an informational office downtown. http://bit.ly/2OYiUdt

37. (Iowa) Step right up to casinos in Iowa to place a bet on sports teams. Sports gambling became legal in Iowa at noon Thursday. http://bit.ly/30iVYa9

38. (Las Vegas) The Southern Nevada Health District on Thursday informed the public of a confirmed case of the measles in a visitor to Las Vegas who frequented Luxor and Mandalay Bay early this month. http://bit.ly/2KAyCHn

VIDEO: This Week in Gambling: Selling off the Vegas Strip as sports betting spreads. http://bit.ly/2KCWqdD
News coming out of Las Vegas is that up to 20% of the casinos on the Strip could be up for sale as soon as next year, including properties like Caesars Palace, Bellagio and the MGM Grand.

Four-Suits Bonus-Baccarat™ 四季花™ THE FIRST Baccarat Side-bet based on the First Four cards dealt, to have Four different Suits. 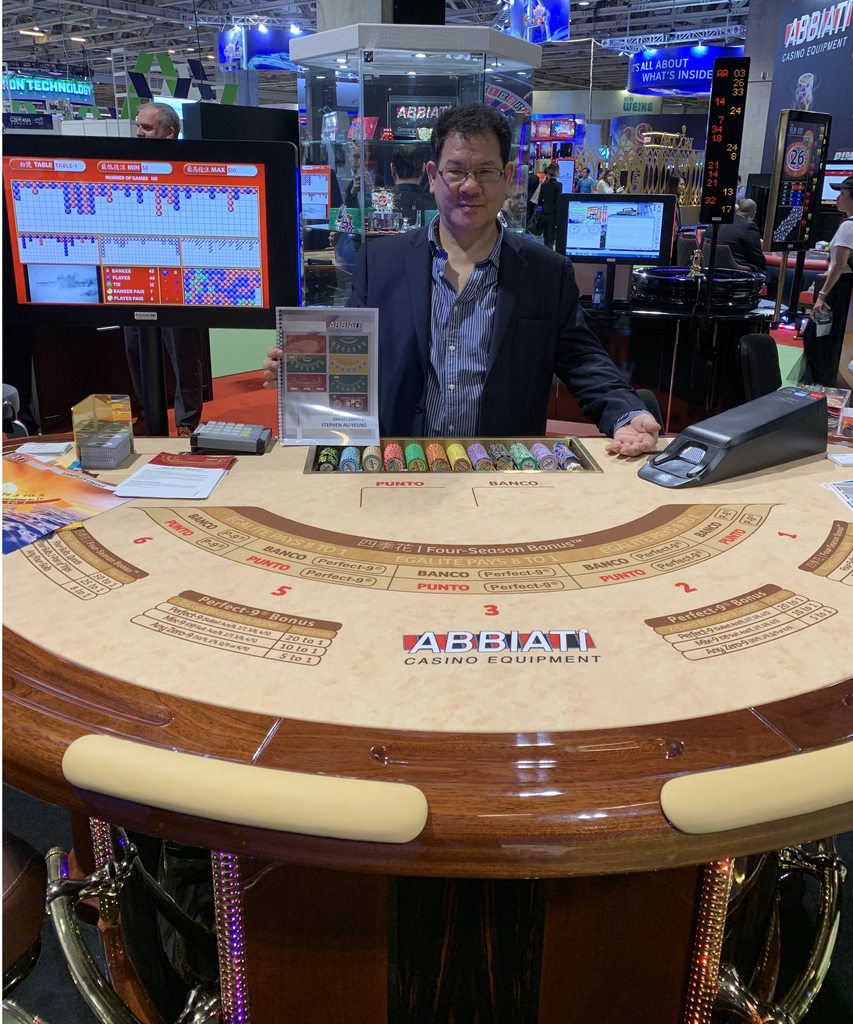 1. Philippine cops to step up fight against casino kidnappings. http://bit.ly/2NcJJIj

13. Empire Resorts to be acquired by Kien Huat and Genting Malaysia Berhad. http://bit.ly/31QVeZQ

24. Taxes will ground Chicago casino, but taking a flier on airport slots could pay off, study finds. http://bit.ly/2HbzhNm

27. Nevada regulators may need to revisit sportsbook registration rules. http://bit.ly/2Z9iFvW
28. (Massachusetts) The broad leaves of the ficus trees that tower over the casino lobby with its flower-covered carousel; the yellow carpetroses that sway in the breeze on the harborwalk; the salt-marsh cordgrass on the brackish banks of the Mystic River; the golden euonymus, inkberry, and petunias that line the path to a 45-foot red oak tree — all this is the charge and joy of Patrick Chadwick. http://bit.ly/2zegSeh

29. (Pennsylvania) Wind Creek Bethlehem may be Pennsylvania’s table games king, but it won’t be Tuesday. That’s because, beginning at 6 a.m. Tuesday, all table games — with the exception of the site’s electronic table games — will close as the facility changes over to its new Wind Creek table chips, the casino said in an email to patrons Friday. http://bit.ly/2TNFSmj

30. (Louisiana) Kathleen Babineaux Blanco, who became the first woman elected governor of Louisiana and then saw her political career derailed by the costliest hurricane to ever hit the United States, died Sunday from complications from ocular melanoma. http://bit.ly/2MqTG5b

31. (Illinois) Fairmount Park Racetrack is filled with spectators on most Tuesdays and Saturdays, eager to watch horses fly down the dirt track. http://bit.ly/2z7ksqz

32. (Arkansas) The casino under construction in Jefferson County comes with the usual promise of well-paying jobs, additional tax revenue and a boost in local tourism. http://bit.ly/2Hf0ZZI

33. (Oklahoma) In an effort to kick-start negotiations, Gov. Kevin Stitt on Tuesday sent a letter to tribal leaders suggesting both sides put aside their disagreement over when the tribes’ gaming compacts with the state expire. http://bit.ly/2KHXcGj

34. (Michigan) Henry and Pat Jones were visiting Michigan to see family and tour the state’s casino circuit. Earlier this month, the Florida couple made a stop at FireKeepers Casino, which was celebrating its 10-year anniversary. http://bit.ly/2KWr7tg

35. (Wyoming) New leadership for the Northern Arapaho Tribe’s gambling enterprise say their goal is to get as much money back to the tribe as possible, a change in philosophy from the previous regime’s emphasis on job creation. http://bit.ly/2Zeo2d2

VIDEO: Something's Gotta Give! APCW Perspectives August, 2019. http://bit.ly/2Z9m6aZ
The crusade against our industry continues in the U.K., as complaints and fines continue to escalate. But as things deteriorate in Britain, some operators may find salvation in America.

2. Hollywood Casino Toledo may have been used to try to launder money. http://ayre.to/SG2B30pntOO

6. Complaint filed against Imperial Pacific for failure to pay US$15 million annual license fee
The casino regulatory body of the Commonwealth of the Northern Mariana Islands, the Commonwealth Casino Commission … http://bit.ly/2z9upUz

10. Chicago casino’s future may depend on who’s willing to take less cash. http://bit.ly/2zaJlSl

15. Indiana: 11 sportsbooks could open next month, two in time for NFL kickoff. http://bit.ly/2KXEeuo

23. MGM Springfield calls first year a success, even though it has fallen far short of projected revenue. http://bit.ly/33O10NZ

24. Resort fees on Las Vegas Strip are on the rise. Here’s why they’re likely here to stay. http://bit.ly/2ZaFoMc

26. (Massachusetts) Encore Boston Harbor launched on Monday a premium coach service to take patrons from Patriot Place in Foxborough to the $2.6 billion Everett casino, perhaps the company’s latest effort to attract clientele from its competitors south of Boston. http://bit.ly/2P60Huy

27. (Illinois) Thousands of Bears fans will make their way to Soldier Field Sept. 5 to witness the team’s latest grudge match against the Green Bay Packers. But instead of trying to score tickets or plunking down on the couch to watch on TV, it’s a safe bet that scores of additional die-hards will trek a mile across the Indiana border to the Horseshoe Hammond Casino, where they’ll be able to put down the Chicago area’s first-ever legal wagers on the nearly century-old rivalry. http://bit.ly/30iZcu0

29. (Louisiana) It seems as though every time there’s talk about the Shreveport-Bossier Gaming industry in recent years the news is far from positive. Revenue is down, customers are going elsewhere, more competition, modernization is needed and the list goes on and on. That list was reinforced and added to with a new study done for the state of Louisiana by the Spectrum Gaming Group. http://bit.ly/2Z1DSN8

30. (Wyoming) New leadership for the Northern Arapaho Tribe’s gambling enterprise say their goal is to get as much money back to the tribe as possible, a change in philosophy from the previous regime’s emphasis on job creation. http://bit.ly/2TPypD7

33. (Las Vegas) Gov. Steve Sisolak will not sign a certificate that would allow the Las Vegas Monorail Co. to secure up to $200 million in tax-exempt bonds, a decision that could derail the transit system’s plan to build two new stations on the Strip. http://bit.ly/33Qd01w

2. Empire Resorts to delist from NASDAQ as Genting-linked firms given green light for takeover
A Special Committee of the board of directors of Empire Resorts has recommended the approval of a proposed merger … http://bit.ly/33O4OyF

19. Nevada casino workers fight an uphill battle to get – and keep – their unions. http://bit.ly/2KKKYg6

20. (National) The AAF has picked up another $125,000 to pay its debts. Which means that the AAF now has $125,000 to pay its debts. But the news that a federal bankruptcy court has approved the sale of the defunct football league’s gambling app to MGM Resorts for a mere $125,000 doesn’t really leave much money to satisfy the league’s millions in obligations. http://bit.ly/33LNPNj

22. (Massachusetts) A group led by a high-profile developer on Tuesday announced a proposal to build a horse track, hotel and casino in Wareham, Massachusetts. If given the green light, the $300 million project would the bring southeastern Massachusetts its first casino and thoroughbred racing back to Massachusetts after the closing of Suffolk Downs in 2014. http://bit.ly/31MId3I

23. (Illinois) Fairmount Park Racetrack is filled with spectators on most Tuesdays and Saturdays, eager to watch horses fly down the dirt track. But with just 41 live racing days this year, the stands at the Collinsville track remain empty far more days than they’re filled. http://bit.ly/324knkf

24. (Illinois) With the city’s extended deadline for casino development applications here, the count still stands at two. City officials aren’t saying which companies submitted them, nor have they revealed whether one came from a group led by former Danville banker Craig Campbell, who has spoke at city council meetings and on social media about ideas for developing a casino in downtown Danville. http://bit.ly/2ZkDvIE

25. (Arkansas) The Arkansas Racing Commission on Monday opened a 90-day window for accepting fresh applications for a casino license in Pope County. The move came four days after a Mississippi company filed a lawsuit against the commission for refusing to reconsider its denial of the firm’s application for the operating license. http://bit.ly/2ZnB4ck

27. (Las Vegas) It wasn’t just any piece of steel, all 60 feet in length and 90,000 pounds in weight, which sat waiting to be hoisted. It carried the signatures of hundreds of construction workers, who have been working for months on land where both the Riviera and the Landmark once stood. They’re building a 1.4 million square foot expansion of the Las Vegas Convention Center. http://bit.ly/2Njpo4d

NeverEndingNews.com Gaming-News from Monday to Friday Only by Stephen Au-Yeung.
*** Weekends are for: New Table-Games, Old Gaming-News, WizardOfVegas, WizardOfOdds and LCB.org.
This Thread has been Approved. Please Block Thread if it's OFF interest to you. Thanks for Reading Never Ending News.