This is the only WOV post to ever provoke me to google "water-based lube advantages." But UGH, now I dread the Google Ads that I will have to endure in the future because I have done this.

Now, this is a good trip report, but why did you order that kind of meal? Have you asked for a host yet?

I actually enjoy Chinese specialty dishes. I usually don't get sick from it.

smoothgrh
Joined: Oct 26, 2011
Sorry about the food poisoning, but I gotta ask: did you eat Mongolian Beef WITHOUT rice?!
gamerfreak

gamerfreak
Joined: Dec 28, 2014
What restaurant was the Mongolian beef from?

What else did you eat that day?
darkoz

darkoz
Joined: Dec 22, 2009
Yes it did not come with rice. Is it supposed to be served with rice?

I know it was the Mongolian Beef because the food bits, particularly the vegetables and spices (peppers) were in the regurgitation.

The restaurant is named in the post Red 8 inside the Encore
For Whom the bus tolls; The bus tolls for thee
smoothgrh

Yes it did not come with rice. Is it supposed to be served with rice?

Food poisoning aside, it's better served on top of rice. Unless you're on an Atkins Diet.

You ordered an entree, which doesn't come with rice. Typically, with other people, you'd order multiple entrees and a side of rice. Or by yourself, you might get a combo platter that includes a smaller entree serving, a side of rice, and maybe a vegetable side.

If I were to order a full entree portion, I'd get a side of rice and split it into two meals: one for now, and the leftovers for later. Unless I got food poisoning.
darkoz

I was feeling better around 3pm so it was time to get this show on the road. But first a hot shower to feel clean again.

No pics of me in the shower!

But here is my view from the 23rd floor of Encore. You can see me in my supplied robe in the reflection 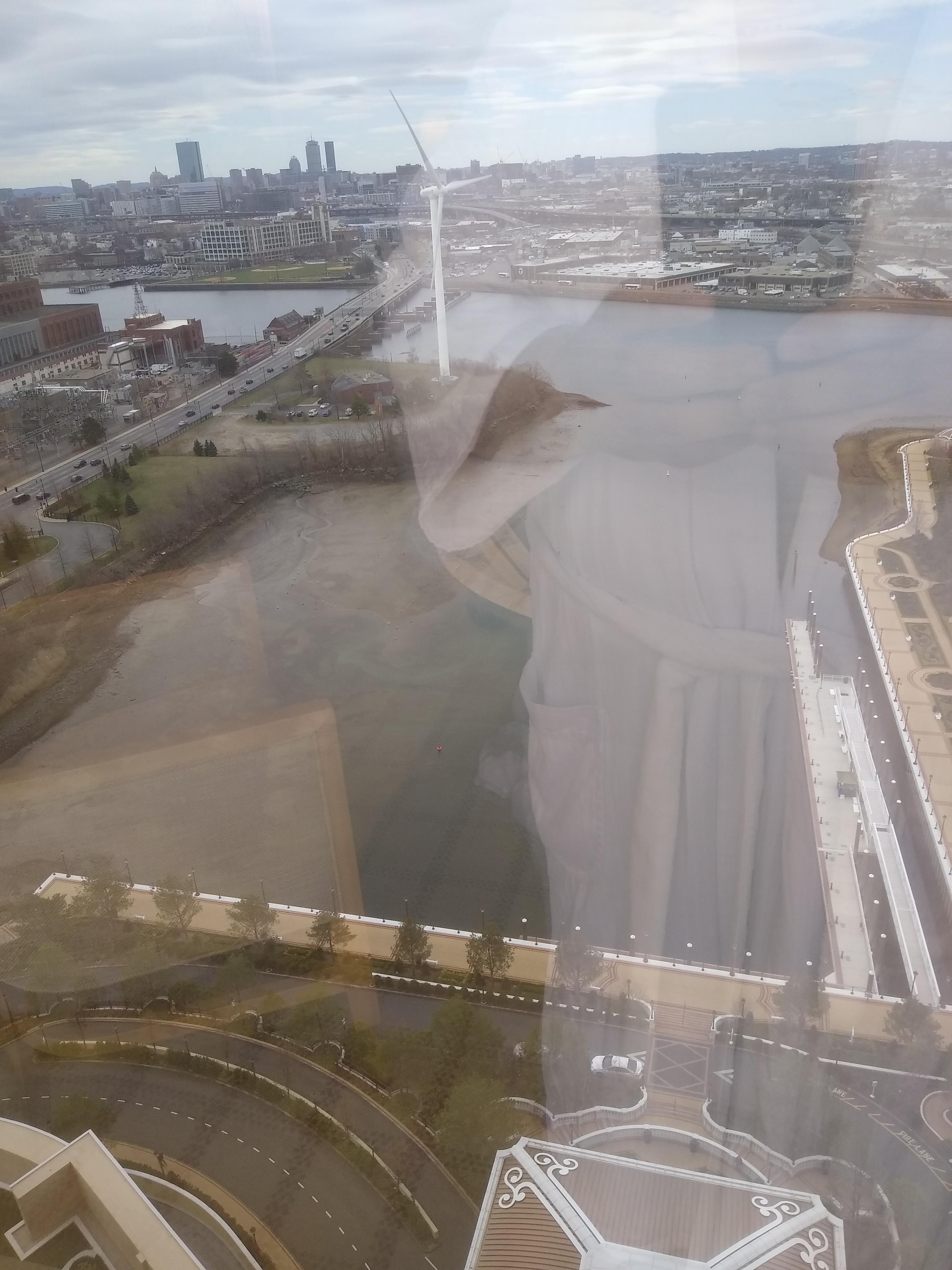 My family did make it to Boston Harbor sans my daughter, arriving around 6am (just prior to my getting sick). One may enquire why my son-in-law would join me without my daughter. A few reasons

1) He drives, she doesn't so it was him or nothing. And my daughter refused to stay in the car with him because she was still angry.

2) It's his family that lives in Boston

4) He owed me money and being my chauffeur for two days was one form of payment!!!!

Here is my grandson sitting by a pillow for scale. Encore has some of the largest pillows I have ever seen. Water and chips are on either side. 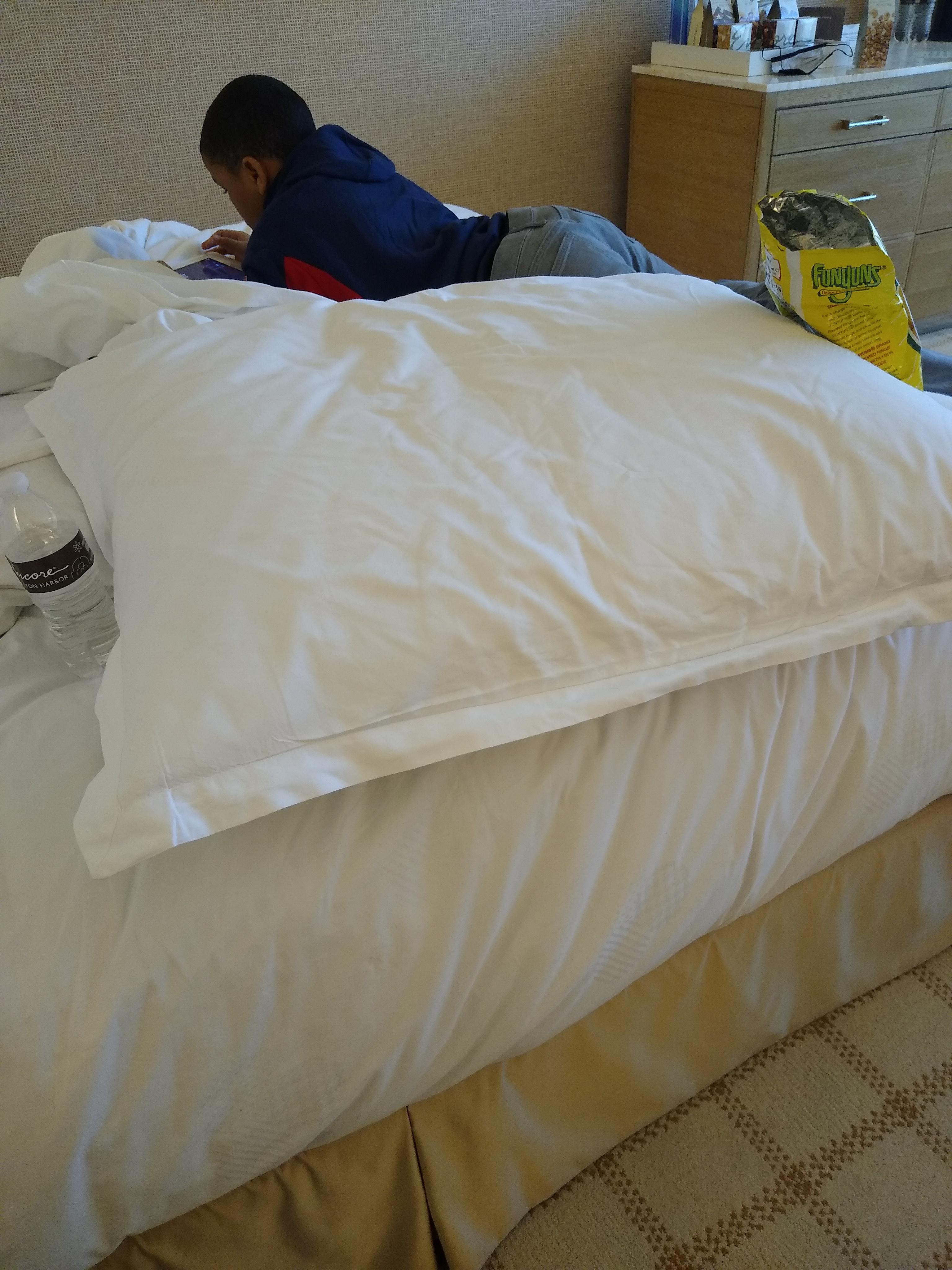 Since it's common on WOV to question chips and truthfulness etc, here is a voucher from my $45 win on Saturday. It's after I cashed out (the change which casinos don't hand out anymore). Notice the date! 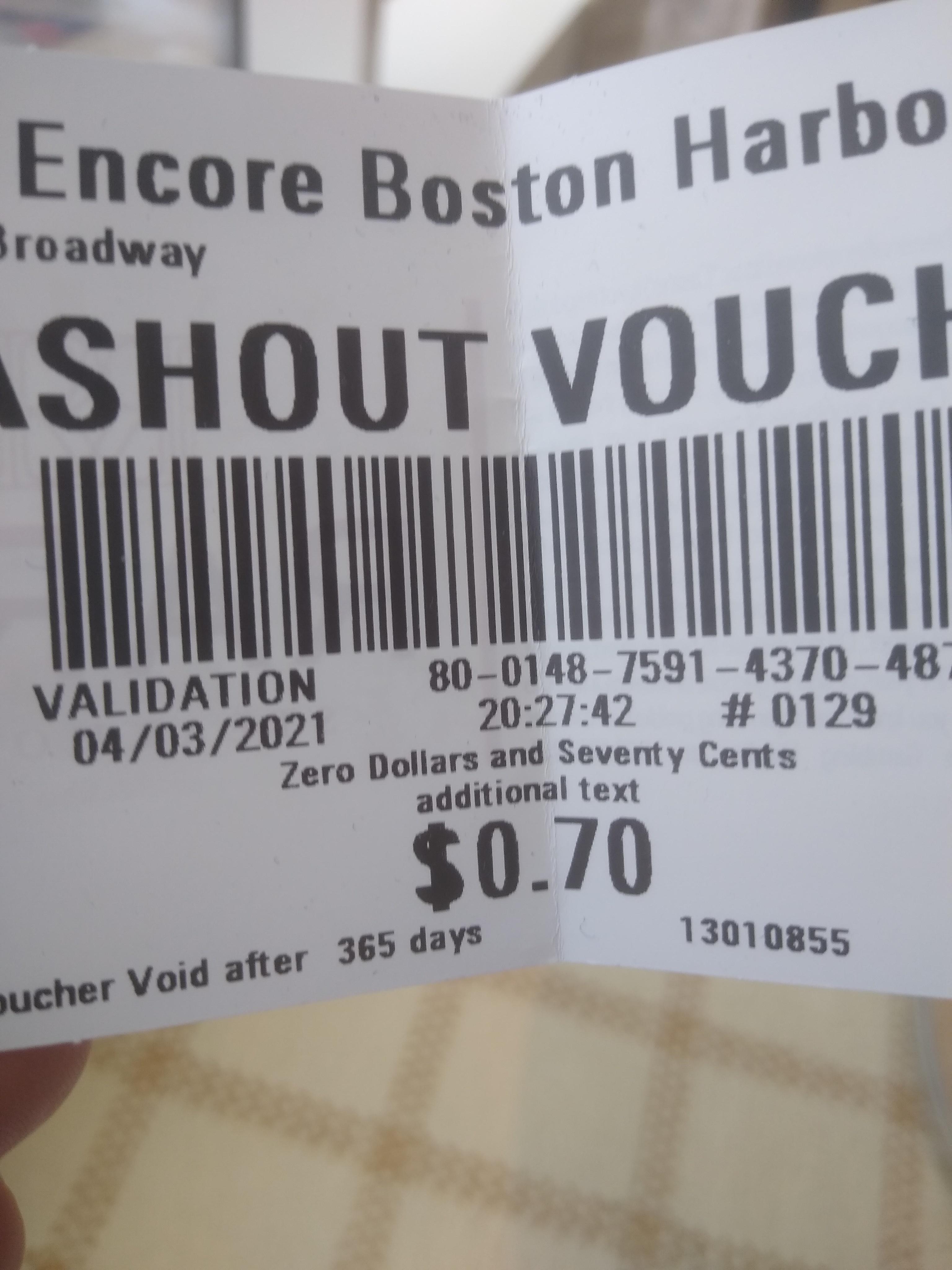 The rooms at Encore are very bright lit. I find most casino rooms are dim and I like to read under somewhat bright lights. The lights in my room were very adequate for reading.

There were no light switches and no television remote. I assumed they forgot to put them in but my ten years old grandson took five seconds to discover everything is controlled by a room tablet. Technology SMH!

Figure out how to use this tablet or you will be in a quiet room with the lights on all night! 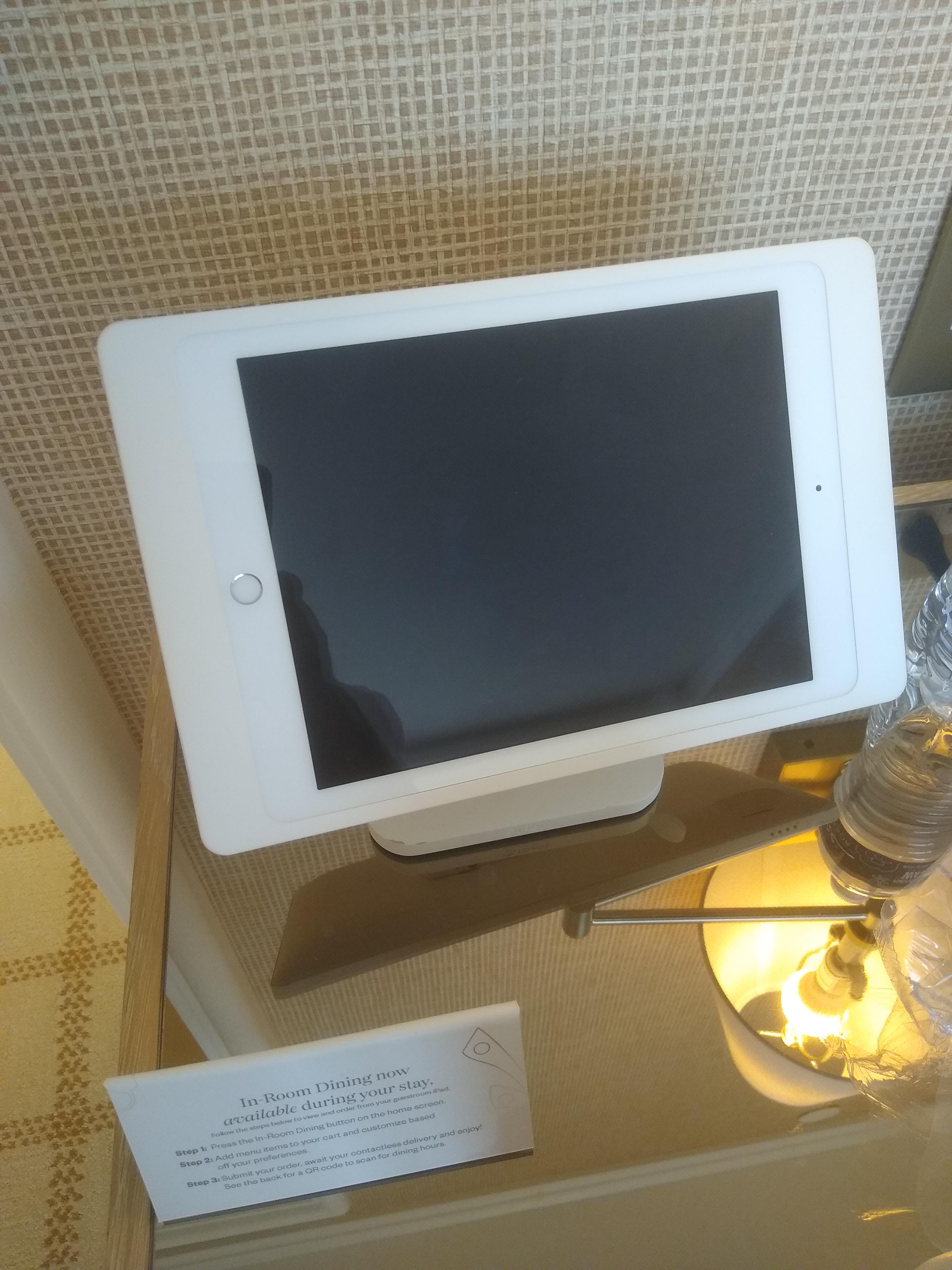 That tablet is on a stand. You can take it all around the room so basically you can control everything even without getting out of bed!

Okay, by four pm the family was loaded into the car and we were on our several hours travel to the real reason for this trip.

A little Advantage Play mission at another not to be named casino!

Day two to be continued:
For Whom the bus tolls; The bus tolls for thee
unJon

unJon
Joined: Jul 1, 2018
Plot twist.
The race is not always to the swift, nor the battle to the strong; but that is the way to bet.
darkoz

So there we were driving to this other casino. To understand my covert mission a bit of history and flashback is required.

Generally I don't like doing just a few players cards. Not enough profit to justify the trip and you risk casinos catching on before you even hit them hard.

Instead I prefer to smack them real hard, twenty, even thirty cards at once. (One casino I hit for over 100 cards a month)

To maintain a regular schedule you would need to have some cards retiring while others kick in. But that becomes dangerous. If the casino catches on they shut off the current cards and then always searching for patterns identify my future cards. Unsure and unwilling to shutdown a legit player they will flag future cards that fit a certain profile and follow their activities closely.

What is normal return on investment becomes all out war as I try to get back as much as I can before more shut down cards and possibly trespass bans are handed out.

I've been through wars. They aren't pretty.

If the rotation is behind then I may wait to reinvest at the current property I am hitting. (Which is why I make $20,000 a week BUT not every week).

After two years of hitting this same property off and on I assigned two of my people to handle it more permanent which means every month.

Alas it wasn't to be!

In December, one of my two people who has worked for six years for me was surrounded by security and they attempted to backroom him but he stood his ground and refused, agreeing to leave. (My daughter laughed it was about time he had his security cherry popped).

Perhaps angry they couldn't intimidate him security tried to frighten him. (note to security: you only end up giving away too much information this way but thanks anyway).

Security said neither he nor his accomplices were welcome. They knew the five people who made up the team and they knew we were the DarkOz team(he didn't say Darkoz, obviously, he used my real name)

Since I only had two people in there if they identified five that told me it had nothing to do with being observed but identified by an external source (I verified it was OSN and yes I know a means to do that).

Secondly, I was getting texts from my other worker who was observing her partner being escorted out while I was on the other end of the casino waiting to get paid for a Jackpot won on someone else's card. They had my ID to pay me. Was I about to get paid or surrounded by security?

In the end I not only was paid, the slot attendant handed me a copy of my players card and suggested I use it to get points and comps (I was using someone else's card so after removing it had just claimed to be playing unrated).

Apparently they hadn't connected this Darkoz with the one in their computer and now, four months later I still have mail and offers there.

At any rate I now was in a quandary. Naturally the cards my guys were using were shut down but I had 22 new cards now set up.

I decided instead to sit on my investment and wait to see what move the casino would do first.

By March it was apparent. They took the lazy route of not wanting to follow a bunch of suspect cards. Instead they just changed their offer schedule from twice weekly to once per month!

Yes, they are cutting their nose to spite their face as making my operations unprofitable by reducing offers also reduces regular players who won't have the same enticing offers to come in. The casino will have less traffic as a result. (This has also happened before and inevitably the casino realizes they have to reinstall the original offers and guess who's back in business)

Anyway, they made my life easier if not profitable. I had one offer on 22 cards in March and one in April. The March offer ended April fourth (a few days carryover) so I scheduled my trip for playing off the March offers April 4th and the April offers April 5th.

And then I would be done

I would recoup most of my original investment but not all. But not as much of a loss as if I left it alone.

So we were on our way for me to do a quick 22 card session.

I was certain they were not watching the cards. As I said their solution was to be lazy and avoid being taken advantage of by making the operations unprofitable. Still, there was the possibility I was wrong and would not be able to conclude my work before being stopped by security.

The original plan was I babysit in the car while my daughter and son-in-law handle the cards but that got scuttled. Now it was my son-in-law babysitting while I handled the whole 22 cards.

Contemplated going in a mask but really didn't see the need and wearing a mask is never comfortable.

In the end everything went quite smoothly. 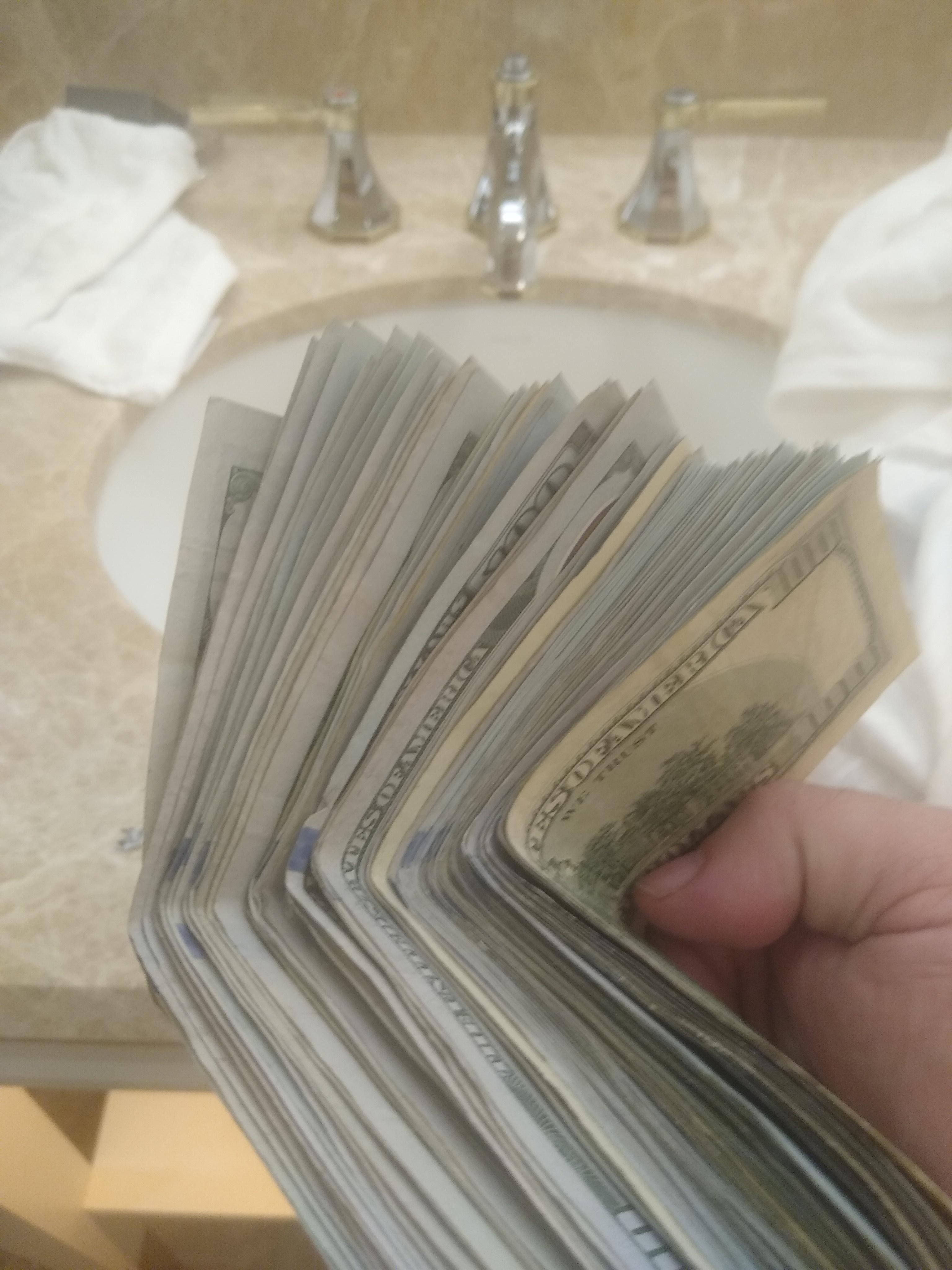 If you are wondering how long it took me to turnover $8,800 Freeplay, approximately one hour!

To be continued:
For Whom the bus tolls; The bus tolls for thee
RSS Feed