Paigowdan
Joined: Apr 28, 2010
What would the Perfect, Ultimate House way be in Pai Gow Poker?
We have discussed a plethora of problems (oh, that word again) about the Pai Gow house way and any lack of standardization, but some requirements come to mind:

1. Short and Easy to Deal and play
2. In Plain English - unambiguous language, the meaning known every time.
3. Short - Very short, nothing convoluted.
4. Strong and powerful for it's length; accurate cut-off points.
5. Supports customer conventions (A-5 wheel straight, players may set to any legal hand, etc.

So I came up with this (mathematically proven) house way. A few things look off, but are actually spot on mathematically; it's just because of the conventions that we're used to playing. 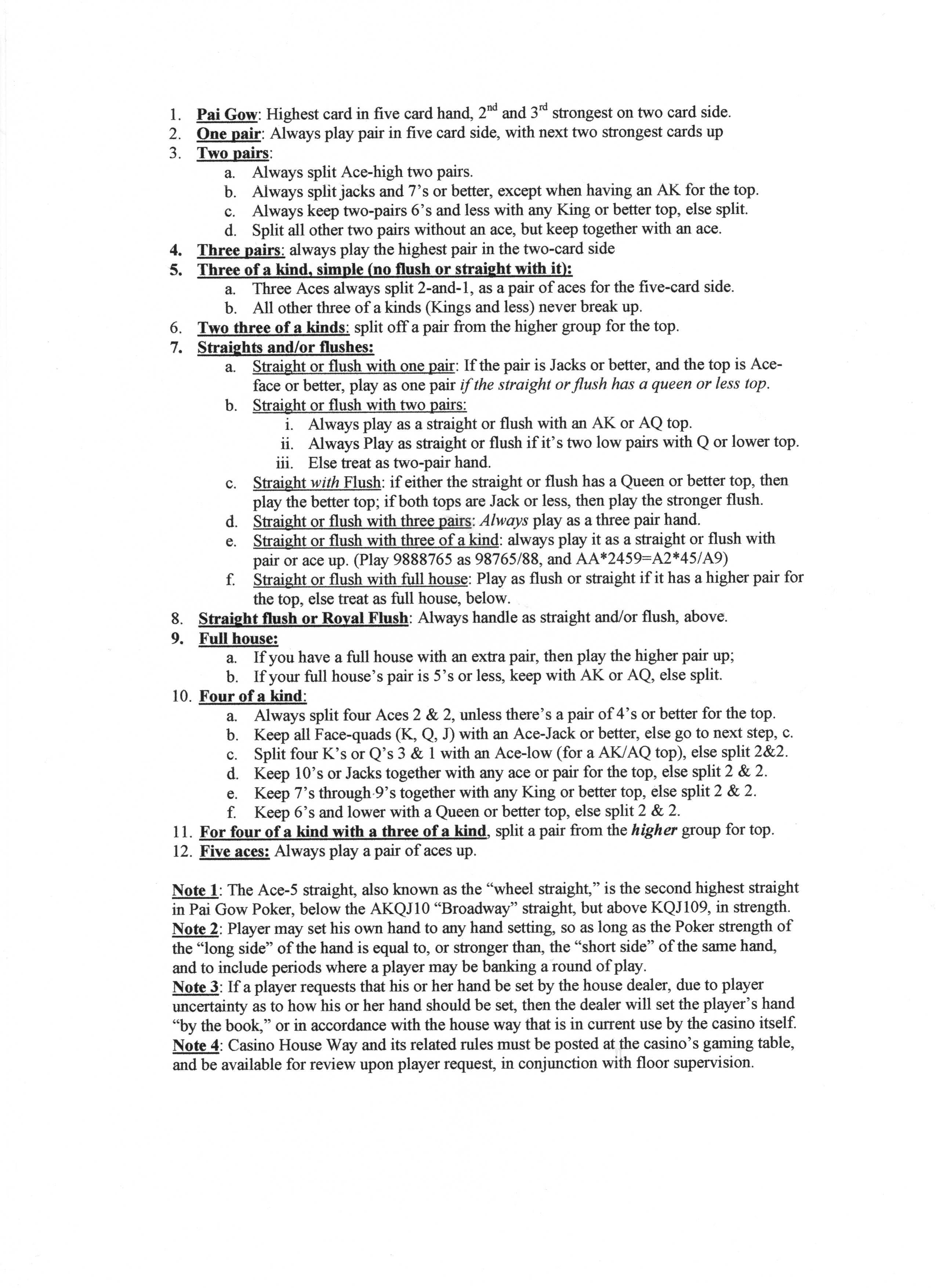 clamchowder
Joined: Nov 8, 2010
Let me be the first to say: Nice work, and thank you.
Paigowdan

Let me be the first to say: Nice work, and thank you.

What would the Perfect, Ultimate House way be in Pai Gow Poker?

1. Short and Easy to Deal and play
2. In Plain English - unambiguous language, the meaning known every time.
3. Short - Very short, nothing convoluted.
4. Strong and powerful for it's length; accurate cut-off points.
5. Supports customer conventions (A-5 wheel straight, players may set to any legal hand, etc.

1 and 3 seem about the same to me. I'd say "short but not too short". Various footnotes and exceptions do add to length and complexity but you should be able to cover the important parts in a straightforward manner in clear bold type.

Think of it as one of those free gambling lessons the casinos offer. They are not at the Ph. D. level. Its a straightforward presentation. The placarded houseway should be both visually and textually simple and straightforward. Its not as if those casinos send their dealers to Pai Gow School for six months or something.
98Clubs

98Clubs
Joined: Jun 3, 2010
Not the Ultimate, but clears up some of the varieties of certain hands with a decending order for the testing.

References to the "front" or "front hand" indicate the 2-card hand.

3.) Four of a Kind with Three of a Kind: Always play the highest Pair to the front.

4.) Paired Four of a Kind: Always play the pair in front.

6.) Full house with extra pair: Play the Triple and Low Pair behind the High Pair.

8.) Straights, Flushes, and Straight-Flushes with Three Pairs: Play as Three Pairs, see below.

11.)Two Three of a Kinds: The higher pair goes to the front hand..

12.)Three of a Kind: Play the Triple in back with best two remaining cards in front,
EXCEPT Always break up three Aces as AA in back of an Ace with best other card.
EXCEPT break up three Kings as KK in back if the highest remaining rank is Jack or less.

13.)Three Pairs: play the highest pair in the front hand

15.)One pair: Place the pair in back and the two highest remaining cards in the front.

16.)No pair: The 2nd and 3rd highest cards play to the front hand: remaining cards in back.

Not hard, but not easy either, Pai Gow Poker has some unusual hands. I didn't want to play "Stump the Dealer".
This House Way is rather strong in comparison, but it all washes in the end.

98Clubs
Some people need to reimagine their thinking.
Paigowdan

Paigowdan
Joined: Apr 28, 2010
98 clubs - looks very good, but disagree with two pair and straights/flushes. This is because of the "copy factor," where AK copies about 7% of the time for the win, and AQ somewhat less but still considerable. This is why in borderline hands in two pairs, straights/flushes, play QQJJAK4 as AK/QQJJ4 instead of JJ/QQAK4;

Also, a casino operator had implemented a new house way company wide, the One Pair rule, where the dealer must play a straight or a flush with a pair of tens or better with an ace up, if the straight or flush does not have an ace for the top. They may have done this to be compatible with Shufflemaster's I-deal machine.
The hand Ad-Kc-10d-10s-4d-3d-2d is MUCH better played as K-10/Ad-10d-4d-3d-2d than AK/1010432. The Ace-high flush with a K-10 top has an EV of about 33%, but the 10's with AK top has about a 13% EV. The rule should be : "Play a straight or a flush as one pair IF a pair of Jacks with an Ace and FACE can be played WHEN the straight or flush has a queen or less for the top." But this might be too compliacted for I-deal to implement at this point. (The I-deal shuffler machine remembers the cards dealt, and so can recommend the best house way to the dealer - or to a player who is uncertain as to play his hand.)

I AGREE with playing KKK 10-9-4-2 as K-10/KK942 for a player's position! Trip kings with a 10 top can ONLY push or lose, but K-10/KKxxx beats a LOT of pai gows and one pair hands. I did not use it becuase it is very "churny," where a dealer's house way (specifically) needs to push through such hands, instead of winning and losing many hands for the same net income, - as it causes hands per hour loses. In this regard, it is BETTER to win two hands and push four hands, than win 4 hands and lose two back, as for the same net 2 wins, you have SIX tansactions instead TWO transactions!

98 clubs - where did your house way come from?
It would be great to get a mathematician to make a call for the industry.
Beware of all enterprises that require new clothes - Henry David Thoreau. Like Dealers' uniforms - Dan.
98Clubs

Most of this is a mish-mash of several concepts from "Strong 2-card" to Wong's Analysis. By making a decision-ladder for the STR, FLUSH, STR-FL's the better 2-card hand plays given multiple choice failure of the ladder. The 2-pair that is also a STR/FL/STR-FL with AA high was put there to get a strong front hand... hopefully AA + straight or better. This is where Pai Gow gets complex, especially with the Joker. Thats why there are several decisions based upon having a STR/FL/STR-FL, and a bucket Just In Case.

Two pair is over-simplified but generally traditional, though JJ + QQxyz is about 60/40 on the 5-card (As a Player, I hate 2-pair QQ ups, Any Ace in the 2-card hand is almost as good as the QQxyz in the 5-card hand: thus QQ99z can play behind A-10 (also 60%) or better). Quads seem fairly routine for most House Ways: the exceptions are a bit unusual.

The Full House was altered in favor of AK/AQ with the 22 (99.7% + 70%). I gave serious consideration to Ace-Face plays up front at all times. The Player should also consider it, as straights and flushes by the Dealer can be overcome, with a strong 2-card hand. BUT, the Dealer splitting 2-pair is a certain push. Six or a half dozen, your choice. (When Player or Dealer has a flush/straight, usually the 2-card hand isn't strong, by breaking up the full house, the trips in the 5-card hand become somewhat vunerable, especially if the House way favors playing Str's or Fl's to the 5-card hand). My personal decision on Full House is play Ace-Face (AJ, AQ, AK) to the Front at all times.

IMHO: I have always found that PaiGow Poker is more of a game of Concepts rather than hard math, but I must state that hard math is needed.

EDIT: The only problem I have with my ladder and bucket is that I play putting all the "and Pairs" up top, and all the "and Ace" on the bottom. There are some serious flaws picking Flush + Ace over a Straight + Pair. I'm not a my way or the highway kind of player, Dealers might see the easy testing of either way

98Clubs
Some people need to reimagine their thinking.
EvenBob

EvenBob
Joined: Jul 18, 2010
Is there an AP way to beat PGP? If there's not, why
would anybody be interested in playing it. I'm in a
casino to win, not to lose at a games HE.
"It's not enough to succeed, your friends must fail." Gore Vidal
98Clubs

And I also think a 1.5% advantage isn't much to write home about either unless the following occurs
8hrs a day at 75 rounds/hr for 300 days a year times 50 years at $100/hand ave.
Thats 13.5 million based on a 2400 hour work-year from age 21 to 71.
Is anyone doing this at Blackjack? or does there still have to be a LARGE variance of wager and/or a LARGE minimum bet?

98Clubs
Some people need to reimagine their thinking.
Paigowdan

Paigowdan
Joined: Apr 28, 2010
Well, there is an "anti-banker/anti-house strategy" that considers the copy effect of the two card side.
Because of the two-card copy factor (where the house wins copies or "matches" on the two-card side), - for all borderline hands that could be reasonably played either way (such as KK55Q2 as 55/KKAQ2 or AQ/KK552), the house picks up a couple of points advantage on these particular hands because of the copy effect, and the player loses if a couple of points if putting up a "copyable hand.

On average, the two card side copies about 2% - 2.5% of the time but on one-half of the full hand; However, certain hands copy FAR more frequency, because with the remaining pool of cards to form the two-card side is about 5 cards in length of average, so the two-card side gravitates to high cards, causing them to copy far more frequently.

In other words, the best way for the banker or dealer to play the hand QQJJAK7 is as AK/QQJJ7, as the AK top copies very often for the dealer/banker advantage, making it essentially a three pair hand, as ONLY a pair on top can beat the AK. But a player (who doesn't receive the copy benefit) is better off playing it as JJ/QQAK7 instead. A non-banking player's AK top facing an opponent's AK top (a common occurence) will lose instead of win in this case.

A player's strategy that accounts for their weakened Ace-face or Face-face top where a split hand become stronger for the player's position is considered.
Beware of all enterprises that require new clothes - Henry David Thoreau. Like Dealers' uniforms - Dan.
RSS Feed