Wizard
Joined: Oct 14, 2009
In the season 3 episode 4 of Young Sheldon, titled Hobbitses, Physicses and a Ball With Zip, Sheldon asks himself the number of possible combinations on a bingo card. A question I'm sure I've asked myself at about his age (this is not a joke). Here are some pictures of the scene. Click on any image for a larger version. 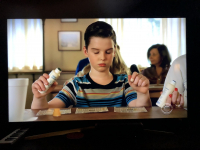 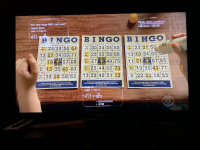 The answer is absolutely wrong.

The same problem happens with the N column call-out (do I hyphenate that?) box?

As to the last image, I have no idea what that is trying to say.

In conclusion, I formally accuse the writers of Young Sheldon for getting the math in the bingo scene wrong. The ironic thing is later in the Episode, Sheldon become obsesses with errors in the chronology of the Lord of the Rings. Hmmm.

There was also a similar scene involving the physics of a bowling ball. I'll bring up that separately.
It's not whether you win or lose; it's whether or not you had a good bet.
tringlomane
tringlomane
Joined: Aug 25, 2012
That's unfortunate. In general most of the "Big Bang Theory" math was right, wasn't it?
darkoz

police officers almost always cringe sickeningly when a Hollywood cop takes a smidgen of powder and tests it for Cocaine by licking it or wiping it on the inside of their mouth. As one officer interviewed said, "no cop would EVER do that. You dont know what the substance is. It could be rat poison."

Hollywood shows have a multitude of people working on any given show and the correct math may have been supplied and then lost in translation from paper to screen. Their job is to entertain not educate in this scenario
For Whom the bus tolls; The bus tolls for thee
Wizard
Administrator

Wizard
Joined: Oct 14, 2009
In the show's defense, Sheldon would have been right if he cared about the position of each number. The show asks "How many unique BINGO cards exist?" However, the formulas shown on the screen were still wrong, although the numerical answers would have been right.

If someone had asked me this question, or I asked myself, I would have used combinations, not permutations.
It's not whether you win or lose; it's whether or not you had a good bet.
dcjohn

dcjohn
Joined: Oct 19, 2019
Interesting. I have seen home games where each column is in ascending order. That does not seem to be the standard, and cards shown in the screen shots are not ordered. They obviously had some help. It would be interested to know how the error occured. Maybe a more egregious error is found on the Bingo Wikipedia page which as of the posting disagrees with your calculation by a factor of half a trillion times or so.
ThatDonGuy

That's unfortunate. In general most of the "Big Bang Theory" math was right, wasn't it?

There is one episode of BBT where Sheldon mixes up ordinal and cardinal numbers (it's the one with the malfunctioning space toilet). Other than that everything they said seemed pretty good as far as I could tell.
My goal of being well informed conflicts with my goal of remaining sane.
Rigondeaux

. Other than that everything they said seemed pretty good as far as I could tell.

I though some of them were great but maybe you have to have a math/sci background to think so. One of my favorites is were they are trying to figure out where to eat before going to see a movie. Sheldon puts so many constraints on the solution space that no solution exists. Wallowitz declares "there's only one solution" and they end up going without him. Sheldon's response ("He's right, it's the only solution") was the icing on the cake. I cracked up but probably because it reminded me of so many work-related situations.
My goal of being well informed conflicts with my goal of remaining sane.
RS

That's a given.
RSS Feed