Another interesting experience at my casino playing the don'ts 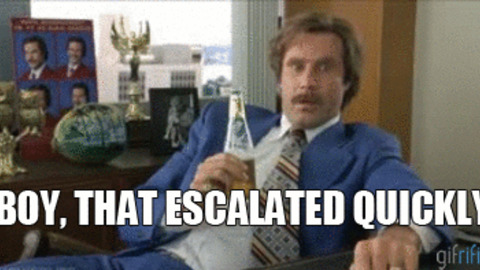 http://rlv.zcache.com/0_60_funny_miata_bumper_sticker-rbec36314e8f444fa95cad483bbe8db06_v9wht_8byvr_324.jpg
♪♪Now you swear and kick and beg us That you're not a gamblin' man Then you find you're back in Vegas With a handle in your hand♪♪ Your black cards can make you money So you hide them when you're able In the land of casinos and money You must put them on the table♪♪ You go back Jack do it again roulette wheels turinin' 'round and 'round♪♪ You go back Jack do it again♪♪
beachbumbabs
Administrator

I believe he's referring to the mind set of just about every manager on the casino floor...you dumb fuck!!

Personal insult +obscenity. 14 days.
If the House lost every hand, they wouldn't deal the game.
JoelDeze

After he had that big win, the table got extremely cold and I'm not kidding you, we went about 10 shooters without anybody making a point, including several of those being immediate 7 outs. So on one of the last rolls of that cold streak he put the rest of his chips behind his passline bet as odds and immediately goes out. He was cleaned out and got another $25,000 marker. I so badly wanted to shout back at him "I'm a winner! and your a loser!"

And btw: I'm actually undecided about this issue. I don't have a problem with somebody getting to cut in the cashout line because of a higher tier, but does being an extremely big better give you the right to talk smack all night to another player and get away with it, while another player can't talk back? I don't know.

I don't have any problems with what he said to you. I would suggest having thicker skin. The guy may be down thousands and is just having a bad day/week/month/year. He might have cancer or is dealing with a terminal medical issue. He might have accidentally run over his dog earlier that day.

The fact is the only person that can make you angry or upset is you. No one has that power. It really is a lack of self discipline.
“It’s a dog eat dog world out there and I’m wearing milkbone underwear .” – Norm Peterson
MrGoldenSun

The fact is the only person that can make you angry or upset is you. No one has that power. It really is a lack of self discipline.

I get what you're saying, but it's fair to expect some standard of civility. Whether or not I have thick skin, if given the choice I would rather not have someone maniacally trash-talking me for no real reason. We're not robots, and it's obnoxious on the part of the other player.

It wasn't the OP being a jerk. I don't get how anyone can fault OP for the fact that someone is yelling "you're a loser" at him. It's on the yeller to knock it off, because that's rude and unacceptable.
RSS Feed