You know how it is though, you get one watch you consider to be the Holy Grail and then something else comes along. There's no end to it. I've actually been getting watches only for the wife lately. She points out that I have too many.
I tell you it’s wonderful to be here, man. I don’t give a damn who wins or loses. It’s just wonderful to be here with you people. https://wizardofvegas.com/forum/gambling/betting-systems/33908-the-adventures-of-mdawg/
MDawg

MDawg
Joined: Sep 27, 2018
The next Vegas trip has been booked, and the Adventures will be posted here sooner than you might think!

At the prompting of - ironically enough, AxelWolf, they will be time delayed so that no one here may determine exactly where I am at at any given moment. AxelWolf has suggested that crazies might try to stalk.

That won't be as much fun for me, not being able to post results at the end of each day, but I'll write the posts and keep a log and then post them all eventually.
I tell you it’s wonderful to be here, man. I don’t give a damn who wins or loses. It’s just wonderful to be here with you people. https://wizardofvegas.com/forum/gambling/betting-systems/33908-the-adventures-of-mdawg/
Marcusclark66

MDawg
Joined: Sep 27, 2018
Welcome back! to the Adventures of MDawg.
I tell you it’s wonderful to be here, man. I don’t give a damn who wins or loses. It’s just wonderful to be here with you people. https://wizardofvegas.com/forum/gambling/betting-systems/33908-the-adventures-of-mdawg/
Marcusclark66

Welcome back! to the Adventures of MDawg.

Personal insult/trolling. Per the Martingale policy, 14 days.
It's not whether you win or lose; it's whether or not you had a good bet.
MDawg

anyone notice caesars bumped many of its active club members to diamond? i should only have like 6000 points but i have 16000. they have gotten rid of a lot of perks and having the diamond card at this time is not any better than the gold card was from what i recount. i just think its funny that they devised this up to get people to feel special at no real extra cost

I haven't played at a Caesar's Ent. (the name Harrah's Ent. assumed) property in years. But in 2019, I upgraded to Diamond via their Tier Match using my Platinum card from Cosmopolitan.

All I got out of was the free ($100. towards anyway) dinner, otherwise did not stay or play at any Caesar's property.

And my status went back to nada (Gold) at some point earlier this year, so I guess matched tier status that was set to expire by the end of January, was not extended.


However, in that I have not played at any Caesar's property in so long, this is one property that my friend who is an outside host has said he can get me into on his ticket. Caesar's still has the grand Baccarat table - only one left in Vegas as far as I know.
I tell you it’s wonderful to be here, man. I don’t give a damn who wins or loses. It’s just wonderful to be here with you people. https://wizardofvegas.com/forum/gambling/betting-systems/33908-the-adventures-of-mdawg/
MDawg

MDawg
Joined: Sep 27, 2018
At this one major where I got a new mid to high five figure creds line during our last trip that ended March 2020, but never got a chance to play this year. I had a line with them years ago, but haven't given them any action since way back then.

Either because they've seen no action from me in over a decade, or no action since opening the line (I actually went in and presented my ID and signed for it, it was active in February 2020), they asked that I resubmit all banking info to "activate" the line before coming in. Not a full-on resubmission of application although behind the scenes I am sure they also ran casino credit. Also it's interesting as their casino credit stated that due to the pandemic they are experiencing delays in verifying bank balances, and asked me to submit the first page only of bank statements to self-verify.

Anyway, all done and activated. 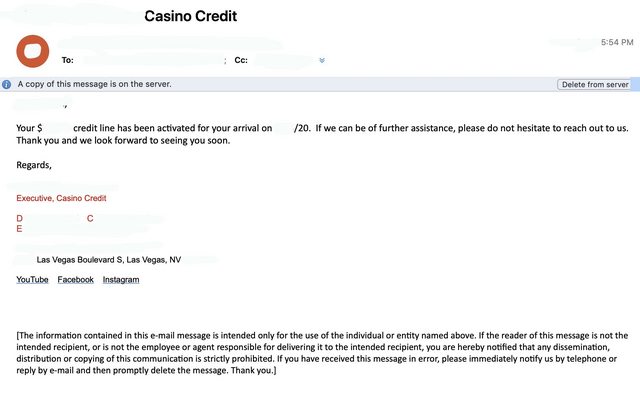 but just goes to demonstrate that at least one of the casinos is re-verifying data post-pandemic to make sure peeps are still casino credit worthy.
Last edited by: MDawg on Sep 6, 2020
I tell you it’s wonderful to be here, man. I don’t give a damn who wins or loses. It’s just wonderful to be here with you people. https://wizardofvegas.com/forum/gambling/betting-systems/33908-the-adventures-of-mdawg/
MDawg

I always used to spread table min to table max at blackjack. How do you think I beat the hell out of them so much? For whatever reason, it worked for me consistently. I've mentioned the circumstances where I felt it was justified here more than once. And it worked almost all the time. Sometimes it actually worked for days on end, all the time. That was before I got banned for a period (handicapped to a 3X spread) - they really hated someone who lost only table mins and won all his table maxes.

KewlJ describes an existence where he is concerned about whether whatever he is doing is even worth it, and has actually gotten to the point of thinking that the casinos might be cheating. This shows you that yes, I do actually read what others write and absorb it.

I don’t think KewlJ, AxelWolf, Redietz, and some others, read much of what I write, at least not carefully, judging by how they summarize it. I think that OnceDear for example, reads what we write here carefully, and whether I agree with his interpretations or not, I have to give it to him that he’s actually responding to more or less exactly what we were trying to say.

In any case, I was never in such a precarious situation as KewlJ describes – possibly undercapitalized, clearly constantly worried about getting banned, wondering if what I was doing was going to feed me this year, and musing about whether the casinos were cheating me. I went in to win, and win big and I didn’t even think much if at all about whether I’d get banned. I did actually get banned for a couple years, handicapped to a 3X spread due to my jumping between min and max bets, but eventually the same top dog who banned me let me back in and even cheerfully introduced me to his crew as “This is ________ , he likes to jump his bet between table min and max.” I mean I was known for that at BlackJack.

Not that it mattered, because I eventually moved towards playing more Baccarat than Blackjack anyway. I just like Baccarat more and I win at it, so why not. But I’m still not going in there to make a living at gambling, and these days I’m not even trying to win big like before, these days just making sure I stay ahead is enough. Which I have stayed very far ahead these past two years since my return to play after my decade or so hiatus.
MDawg win/loss 2018-2019.

And I won over all back then too (pre-hiatus), including some nice low to mid six figure winning trips.

Maybe Vegas has changed; I get the impression KewlJ hasn’t been alive very long so maybe Vegas was different back then and they gave us more leeway. I don’t know. But, I think when you’re clinging desperately to not getting booted you’re already playing with a handicap. Me, I didn’t worry about getting booted and just went in and played to the max every time. If I got booted, so what, gambling was never an occupation for me I’d just go home from my trip back to my real career. Vegas was just fun for me not an occupation. If you don’t care, you play a lot harder than the kind of grind KewlJ describes – if you think you should jump your bet, just do it, don’t pull your spread back to avoid detection that’s silly. I just think it’s a waste of time to pussy foot around how can you win if you’ve got a ball and chain of your own making around your ankle.

No you don’t have to jump all the way to table max if you’re KewlJ the Pro but I get the impression that he doesn’t even spread as far as he thinks he should because he’s afraid of getting detected. If so, he’s already handicapping himself without any intervention from the powers that be. And there are many “professional card counters” who will tell you the same thing – to do your thing when you go in there not ease back just to avoid detection.

And at the end of the day, still KewlJ is wondering whether whatever he is doing is worth pursuing. That right there is enough to tell me to avoid whatever path he’s on.

The path I choose is the MDawg one.
I tell you it’s wonderful to be here, man. I don’t give a damn who wins or loses. It’s just wonderful to be here with you people. https://wizardofvegas.com/forum/gambling/betting-systems/33908-the-adventures-of-mdawg/
RSS Feed