The Future of Interactive Gaming (Part 2 of 5)

I'm going to take a little ride in my mental time machine to a time, perhaps not so long ago though it mayseem like it, in which I was standing in our local pizza shop with what seemed an innumerable number of quarters in my pocket.  I stood before a pinball machine, intense focus blazing in my twelve-year old hazel eyes and apparent in my fixed jaw, perhaps a few beads of sweat glistening my forehead as I got close to the score of the previous player, and if I were to surpass that score, not having to pay for the next game. 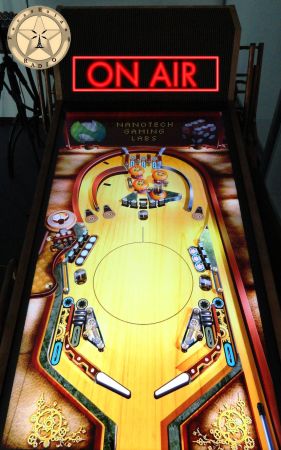 I would still be the, albeit temporary, King of the Pinball Machine.  The Divine One who the commoners would have to come in droves in further, hopefully vain, attempts to knock off of his exalted throne.

In the interest of journalistic integrity, I should mention that it was actually the Arcade version of Mortal Kombat...I was never really much into the Pinball game.

What if we could take that Arcade that existed then and use our time machine to move it into the now?  The stakes would be higher, of course, as many of us would consider a pocketful of quarters more of a burden than a blessing and look for the nearest bank or retailer to turn them into paper currency.

But, the concept, what if the concept remained the same?  Winner stays, loser pays.  The natural order of life that we recognized even at that tender, barely pubescent stage, reinventing itself in all of its elegant simplicity.

While I realize that our collective human attention span has been decimated by easy access to countless  modes of information and entertainment alike, I would suggest that anyone wishing to fully understand and appreciate this game watch the following videos:

I should imagine that those guys can explain it better than I could ever hope to, after all, the good people of NanoTech Gaming Labs are the ones who invented it.  They are, potentially, the pioneers of a new order of Gaming, an order in which player immersion and integration are at the forefront of objectives when creating a new game.

There are multiple ways to play this game.  For a player who does not believe she is very good at Pinball, she may choose to play a game in which skill does not matter at all.  The default setting for a $100 bet on the game is an EV of 99%, so regardless of how this player performs on the pinball game, on an even money bet, 49.5% of the wheel will be Green and 50.5% of the wheel will be Red resulting in an Expected Loss of $1, ergo, the 1% House Edge.

However, to varying degrees, a player can opt to have skill be, in part, the deciding factor when determining the EV of his or her bet.  A different player might believe himself to be very skilled at Pinball, and as a result, want skill to be reflected as much as possible.  The player can customize the degree to which skill matters to such an extent that he might be playing with an EV Range of 75%-123% (because 75% is the minimum permissible return in Nevada).  We notice immediately that the mean of these two numbers is 99%, and indeed, if the player plays a perfectly average game, (exactly 50th percentile) then the wheel will reflect 49.5% Green and 50.5% Red.

On the other hand, let's consider a player who is making an Even Money bet of $100 who plays the best game ever seen on the machine.  That player will then achieve an Expected Value of 123%, which reflects an Expected Win of $23 (in a few minutes!) and the Wheel would reflect 61.5% Green and 38.5% Red.

The actual result of the wheel is subject to randomization, of course, but the player can actually improve (or worsen) his probability of winning any individual bet purely by way of his actions!

If that degree of integration and immersion isn't enough, fear not dear readers, for this game is even more customizable than that!

The skill-based player can attempt to go for a $1000 win betting $100 in this way and go a not insignificant way towards improving his probability of doing so with an excellent performance.  For instance, a 23% advantage with the best game ever would yield a probability of winning closer to 1 in 9 rather than 1 in 11.

However, "Skilled," and, "Unskilled," are not the only options.  In fact, the player can personally suggest the degree to which skill will be reflected in the probable result.  Conceivably, a player could play with a return Range of 97-101%.

Many people out there are not going to understand the resolution process of this game or how the potential advantage of the game changes, but I think poker players will certainly understand.

Poker is a game of skill, but it doesn't have to be.  In terms of pure luck poker, imagine a Five-Card Stud game in which two players each bet $100 and the dealer dishes out five cards to each player with, perhaps, the last card face-down for effect.  The House will get a rake of $2 for dealing this game and there are no betting rounds because the best hand wins, that's it!  The Expected Value for each player is 99% (slightly less if the House rakes on ties, but that's negligible) and one player will win and the other will lose.

While casinos would love it, even dealing only thirty hands an hour the House would be guaranteed $60, no such game exists because poker is fundamentally meant to be a game of skill.

Pinball, on the other hand, can be a game of either skill or fun in this case because the player may choose for skill to either be a factor or not be a factor.  However, for the player who enjoys Pinball playing an, "Unskilled," game, the immersion factor is likely still there.  Perhaps the immersion factor will be there to such an extent that, as the player feels that he/she is improving at the game, he/she will dial up the degree to which skill matters.

This is also not a game that requires a fixed default House Edge.  For instance, if the House made the base return 98%, then, for the player who wants to play a maximum skill-based game, the return would likely range from 75%-121%.  It's customizable on all levels for both the players and for the casino.  There are limitless options.

The only possible problem with this game, in my opinion, is that players might not be ready for it just yet, or more likely, the casinos may not be ready for it just yet.  I certainly hope it gets the chance because, while I have little doubt that Interactive Gaming has a bright future, the degree of success enjoyed by this game (and the casinos who offer it) could go a long way into determining how quickly players will find themselves with fully interactive gaming options.

[q=mission146]The only possible problem with this game, in my opinion, is that players might not be ready for it just yet[/q]

Can you estimate how much it will cost one
these kids with no money to get good enough
to play one of these with skill?

No, I can't because the degree to which skill is a factor is contingent on how well the other players perform. I think, as with other AP plays, skilled players will need to scout for opportunities...theoretical EV, in this case.

In other words, you'd want to look for machines that have a lower average score than some others.

It took me a only a few games(2) where I was willing to bet any of the game designers I could beat them heads up(they must have had tons of practice),and I did. I was willing to give odds for more action, but I was turned down.

I suspect some people will not need much practice at all, others will never be good enough.

But this is a video game so how fair is that part? The starker / key master games clam to be skill but they really seem to be rigged to hit a payout % rate.

But what happens when the very skilled player wins big and get's kicked out / banded / does not get there cash?

This one guy used a betting? system for a horse racing game and He was charged with taking advantage of a machine malfunction to secure a benefit - an offense that carries a maximum jail term of 10 years. I have head that old roms / software for that game had a winning betting system in them and they fixed that in a update. So was the malfunctioned that they failed to update the software and used that as a BS clam to get out of paying up?

I certainly hope someone with NanoTech Gaming sees this and gives you a response, but I'll give my thought on it for the time being. I do have an upcoming Interview with Aaron Hightower, after he is done being swamped with G2E, so I'll steer him in the way of this, as well.

They are set to hit a payout rate, but it seems that without going into the extremely specific technical details, it's difficult to know exactly how the advantage mechanism works. They have repeatedly mentioned that there has to be, "Theoretical Advantage," available on the machine for one to play at an advantage, so I might take that to mean that the machine must have paid out less (to that point) than the base Expected Return.

I suppose that getting banned is a possibility, but it would be illegal for the casino to not pay, in this case. Hard Rock Las Vegas is about to find that out the hard way, as have many casinos in the past, and I just wrote an Article on that:

I know that Nestor and Kane got off Federal charges for Wire Fraud for exploiting a flaw in Game King Video Poker machines involving the double-up feature. Further, with the case of Vegas Pinball, there is no, 'Malfunction,' whatsoever as the machine would simply be performing as it is meant to perform.

" the degree of success enjoyed by this game (and the casinos who offer it) could go a long way into determining how quickly players will find themselves with fully interactive gaming options.