Predict the Teams to Make the Super Bowl Contest

Quote: Doc (back on 8/25/10 after picking the Patriots over the Vikings)

... I have admitted that I know nothing about professional football, so now I will reveal my strategy for this contest. This thread derives from Nareed's "One lousy bet" thread where he named what he said were the four most-likely teams. I checked the NFL web site and found that three of the four are in the AFC. I picked one of those three at random over the one from the NFC. How stupid is that for someone with no knowledge of the teams?

I won't judge. But if you win, you owe me one third the prize :P

Well, Nareed, it turns out that the one-and-only NFC team you listed in your four-most-likely has already bitten the dust. How could I possibly develop a winning strategy for either of us if you provide worthless information for me to steal when looking over your shoulder? I'm blaming this all on you!
Mosca

Mosca
Joined: Dec 14, 2009
Lots of us backed the Packers... they have one long row to hoe, but they also have the horses (Rodgers on O, Matthews on D). If I were to pick today, I'd take Steelers over Saints.
NO KILL I
Nareed

Well, Nareed, it turns out that the one-and-only NFC team you listed in your four-most-likely has already bitten the dust. How could I possibly develop a winning strategy for either of us if you provide worthless information for me to steal when looking over your shoulder? I'm blaming this all on you!

Yeah, that's so laughable now, I should go ditzy and say I picked the Vikings becasue I like purple (and I do!), and isn't Brett a ruggedly handsome man? But I won't.

Remember the Vikings Rule the owners passed last year? It's a change in the overtime rules for playoffs games, to go into effect this season. Now scoring a field goal won't win the game, you have to get a TD. If you get a field goal, you kick off ot the other team. If they can't score, you win. if they score a TD, they win. If they score a field goal, the game goes to sudden death and the first to score anything further wins.

This came about because the Vikings lost in OT against the Saints last year, and many people were disappointed Iron Man Brett didn't get to touch the ball in overtime. Ergo the Vikings Rule, though Minnesota voted agaisnt it (I'm sure Mel Blount didn't vote for the rule named after him, either).

So here's my reasoning: the Vikes nearly made it to the Big Game last year. This season was likely Favre's last (got that right, probably). So the combination of should have added up to the best Vikings team ever. Not the meltdown we witnessed, and Chilly's ignomious exit. The man was supposed to be a good tactician, wasn't he? Football is all about tactics and strategy anyway.

Ok. I accept the blame. I'm sorry and I won't predict the Vikings ever again. If I see a blackbaord in the next few days, I will write 100 times "The Vikings are the New York Jets of the NFC."

Nah. "Happy" would require favorable results. But I'm satisfied just having someone else to put the blame on. :P
Nareed

Nah. "Happy" would require favorable results. But I'm satisfied just having someone else to put the blame on. :P

I guess that will do, then.

But if you're not happy, no way I'll write some ironic observation on a blackbaord 100 times. On a piece of paper, maybe, and only once.
Donald Trump is a fucking criminal
slyther

slyther
Joined: Feb 1, 2010
Speaking of the new OT rule... if I was kicking off to start the first OT I would onside kick every time. The reason being that if you recover the kick, that counts as the other team's possession since they 'had the opportunity to possess'. You can recover the onside, and kick a FG and win. plus, onside kicks are much more successful when they are not expected.
If you don't recover the kick then you can hold the other team to a FG and still get the ball back with a chance to tie or win. Touchdowns don't happen all that often.
slyther

Mosca
Joined: Dec 14, 2009
Jeez, if the Packers go down next week, we all lose!
NO KILL I
Ayecarumba

Jeez, if the Packers go down next week, we all lose!

Everyone get out your cheesehead hats!

However, the cheesebra is optional: 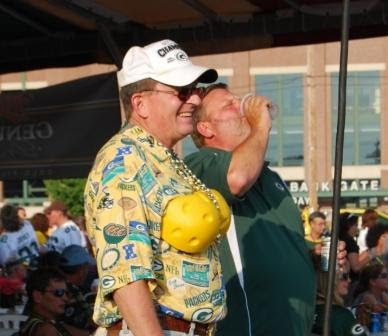 And there go most of the remaining picks... looks like we're down to 5

If nobody wins, what I'll do is give a prize to the last man standing. If it is a tie between two or more, I'll determine the winner randomly.

So IF the Packers lose, each one of the five left will have a 20% chance. Here is how I'll do it. I'll add up the total points in all divisional playoff games and divide by 5. A reminder of 0 = Mosca wins, 1=CapnDave, etc.. If there are survivors after this weekend we'll do something similar for the playoffs.
It's not whether you win or lose; it's whether or not you had a good bet.
RSS Feed