Why can't i stop playing this slot game where i won a W2-G last year?

noy2222
Joined: Nov 18, 2009
Scientists theorize there is an amount of money a gambler can win that would satisfy him.
That theory has yet to be proven under laboratory conditions.
100xOdds 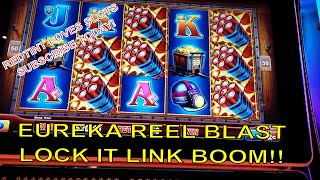 like the other versions, there are 2 bonus games:
1) free games is similar
2) different game mechanic for the cash bonus game. (ie: $, mini, minor, major, grand)

im just going to be discussing the cash bonus game.
unlike the other lock-it versions, Eureka doesn't use symbols to win one of the jackpots (mini/minor/major/grand).
Instead, you collect dynamite icons and it's easy to get a lot of them.

the reason being that jackpot prizes aren't automatic wins when you get enough dynamite to meet the requisite for that jackpot level.
you can also win $ too.

I am ADDICTED to this version!
basically, ive fallen for the illusion that the Major is much easier to hit than the other Lock It versions.
Last edited by: 100xOdds on Jun 17, 2018
Craps is paradise (Pair of dice). Lets hear it for the SpeedCount Mathletes :)
100xOdds

Looking for Lock It Eureka free play or even with real $$$
Craps is paradise (Pair of dice). Lets hear it for the SpeedCount Mathletes :)
casinoplayer42

casinoplayer42
Joined: Aug 15, 2018
I never understood the draw to the lock it link and lightning link games. they just fill up reels. don't seem interesting to me.
RSS Feed